From Backpage to the Back Streets 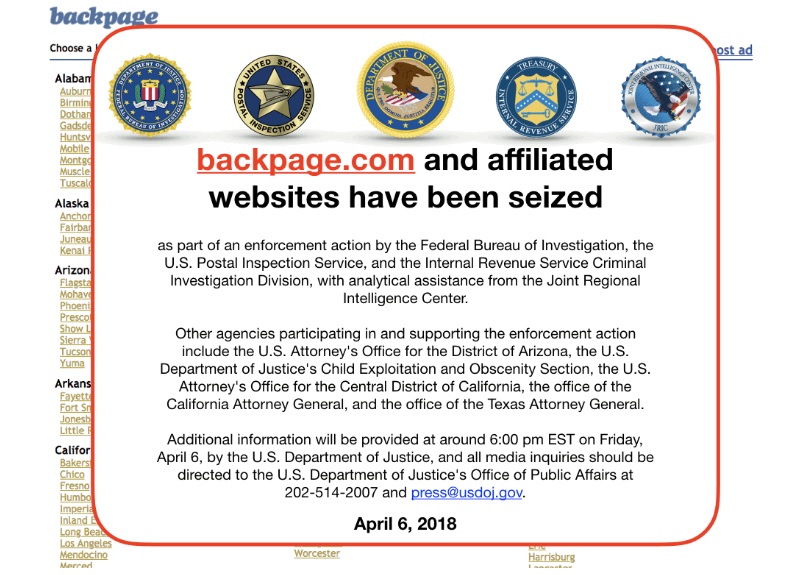 On April 11th, the Fight Online Sex Trafficking Act and Stop Enabling Sex Traffickers Act (known collectively as the FOSTA-SESTA package) were signed into law by Donald Trump. Passed in the House of Representative with a vote of 388 to 25 and in the Senate 97 to 2, the bills received support from the likes of both Democrat Bernie Sanders and Attorney General Jeff Sessions; it seemed like an important, bipartisan, picture-perfect cause for the president to get behind. The signing, however, was met with a wave of fear and anger from sex workers, law enforcement, and advocates. There is concern that the bills will force sex workers out of the safety of online spaces and push other illegal activities further underground, putting potential victims at increased risk.

The signing of the bills comes as a victory for certain anti-sex trafficking activists, who point to the complacency of companies in the use of their platforms for use of trafficking (including the development of coded language to indicate minors being sold for sex). Highly publicized cases such as that of Yvonne Ambrose, whose sixteen-year-old daughter was murdered after being sold on the website Backpage.com, made the passing of the bills seem like an iron-clad victory for victims.

In practice, the bills amend Section 230 of the 1997 Communications Decency Act. The Act contains a safe-harbour clause which protects companies from liability related to any illegal content posted on their platforms. Advocates for the bills claim the Act was outdated and ill-equipped to deal with modern levels of crime committed over the internet, including for the non-consensual sale of sexual activities. The bills are meant to address these shortcomings and aid in holding complicit websites accountable to victims.

The movement to fight online sex trafficking has forced websites such as the now-infamous case of Backpage.com to shut down, with ripple effects of various degrees of severity on websites like Craigslist and Facebook. Action against sex trafficking is challenging, and often leaves victims dissatisfied with law enforcement and policymakers. The passing of the FOSTA-SESTA package is an important step in acknowledging the voices of victims and allocating blame on complacent parties. The problem is that it is leading to more harm than good.

Prostitution is illegal in all but ten American counties, all in the state of Nevada. Sex work is therefore limited by the constraints of secrecy. With the rise of the digital age, sex workers turned to the internet, and websites such as Backpage or Craigslist, to find and interact with clients. This has provided more consistent access to employment, as well as a greater deal of agency for those selling their services. With more reliable demand and a platform to vet potential clients, sex workers are using the internet to increase security in what is widely considered the deadliest female-dominated field of employment. Online, workers can warn others of risk, inform friends of their location, and, perhaps most importantly, have the possibility of choosing which jobs to take.

Backpage has played a figurehead role on the debate on both sides, with victims of trafficking pointing to the site turning a blind eye to visibly illegal activities, while sex workers point to the increased measures of security from having an online platform for cheap advertising and communication. The website was shut down on April 6th, 2018. A Department of Justice seizure notice now pops up when opening the site, listing the various departments responsible for the investigation leading up to the shutdown. Charges were brought against the company and its CEO Carl Ferrer, who pleaded guilty on April 12 to various charges including conspiracy and money laundering.

A 2017 Baylor University study suggests that sex workers’ use of Craigslist’s personals section, which was shut down subsequent to the passing of FOSTA-SESTA, in fact significantly reduces female homicide rates within the sex worker community.

Even without direct prosecution, many websites serving the sex worker community are closing their doors out of fear of litigation after the passing of the bills. This may lead to a complete erasure of safe digital spaces for the community, taking away a carefully constructed means of survival. Though formal information is challenging to confirm, sex workers and advocates claim disappearances and deaths have already risen steeply since FOSTA-SESTA and the closure of Craigslist’s personals, Backpage, and other platforms. Police in San Antonio and Sacramento have reported significant increases in street prostitution arrests. Houston police are reporting a shift in the demographics of similar arrests, with an increase in 14- to 17-year-olds, suggesting a possible outflux of a younger generation previously working online.

A turn to the streets isn’t the only concern for sex workers. Without the agency provided by cheap and simple advertisement, workers may be forced to turn to pimps for easier access to clients. Empowering pimps creates a cycle of dependency for workers, in effect morphing the consensual sale of sex into something far more ambiguous.

Concerns over the unintended consequences of the bills extend outside the sex worker community, notably by law enforcement officials. Though online platforms have provided new opportunities for traffickers, they have also served as an invaluable tool for police to track illegal activities, locate victims and identify pimps. Officials have expressed concern that pushing these activities to the dark web or back to the streets will give pimps more control and remove measures of safety, rather than “stop enabling sex trafficking.”

The number of online sexual advertisements decreased 75 percent by September 2018, five months after the passing of the bills. However, the question of whether the non-consensual portion of these advertisements has witnessed a similar decreased or simply moved further from the eyes of law enforcement remains unanswered and is unlikely to find any resolution.

While victims and others affected by trafficking should certainly not be ignored, measures to combat these activities must consider the effects these policies have. With policies addressing the consensual and non-consensual in one broad stroke, dangers increase on both sides.

For the time being, sex workers complain, with increasing fear and anger, that their voices are being ignored on an issue directly affecting their safety. Though statistics are fuzzy, community history and reporting certain suggests that the passing of these bills is threatening the lives of a group already at risk.