From Tokenism to Direct Action: What First Nations are Demanding of Canada

Canadian-Indigenous relations in the wake of the George Flyod uprisings 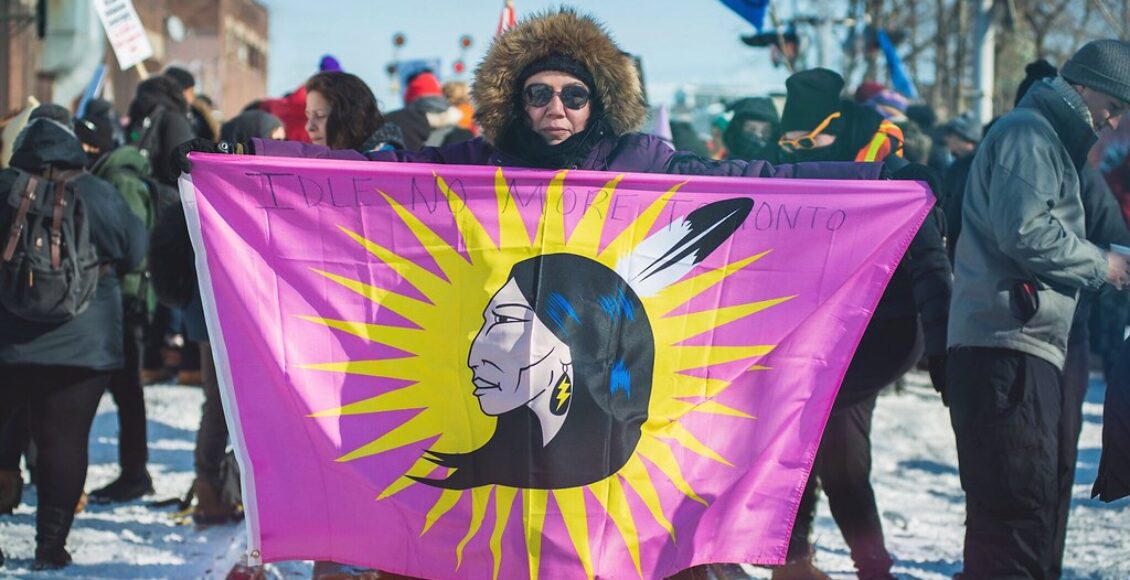 For many, the recent murder of George Floyd by Minneapolis Police ripped the mask off institutions of law-enforcement, leading millions worldwide to demand systemic change. Although many Canadians typically seek to distance themselves from social issues occurring south of the border, ongoing protests against police brutality strike close to home for Indigenous peoples and other minority groups in Canada. Prime Minister Justin Trudeau already took a big step by publicly acknowledging systemic racism in the Royal Canadian Mounted Police (RCMP). Trudeau’s statement was likely a response to recent abuses of power by the RCMP, including their apprehension of an Inuk man by hitting him with the open door of a moving truck and the killing of 26-year-old Chantel Moore in Edmundston, New Brunswick.

In other scenarios, the issue not only pertains to overt acts of police brutality, but the failure to provide adequate care for Indigenous communities in the first place. The Native Women’s Association of Canada (NWAC) compiled data from 582 cases of violence against Indigenous women and girls, finding that over half the cases remain unsolved. Without justice for these crimes, Indigenous communities are silenced when advocating against oppression. Furthermore, the National Report of Missing and Murdered Indigenous Women (MMIWG) provides damning evidence of Canada’s continued mistreatment of Indigenous peoples and the RCMP’s apathy towards their oppression. The Canadian state plays a clear role in Indigenous peoples cultural, political, and economic destruction. While the statistics seem dire, there is hope for a brighter future. Uprisings across North America against institutionalized violence and racism shed new light on this struggle. They have galvanized the movement, garnering support from the prime minister and prompting RCMP commissioner, Brenda Lucki’s acknowledgment of systemic racism in Canadian policing. While recognition is essential for reparation, Indigenous leaders are now urging Canada to move away from tokenistic land-acknowledgments or apologies towards direct action policy initiatives.

Rights and demands of First Nations

In 2007, following the passage of the United Nations Declaration on the Rights of Indigenous peoples, Canada established the Truth and Reconciliation Committee (TRC) to investigate and research current Indigenous-Canadian relations. In 2015, they concluded their research with a detailed report and 94 direct calls to action to improve the situation and amend past wrong-doings of the state. These calls include the National Inquiry into Missing and Murdered Indigenous Women and Girls (NIMMWG), which outlines Canada’s plan of action. This plan involves establishing an Indigenous human rights tribunal, a national action plan on equitable access to education, housing, employment, and safety, and the creation of long-term funding for educational programs on violence prevention. Regarding criminal justice, calls have been made for more culturally-educated lawyers along with further investigations into Indigenous victimization in the legal system. The report clarified the need for more investigations and data to form a holistic approach. In the wake of incidents like the RCMP beating an Albertan Chief, the ensuing outcry against police brutality sheds light on the criminal justice aspects of this report, exposing failures that contradict the RCMP’s 2018 promise to reform. The 94 calls to action and NIMMWG each layout a path forward for Canada. Now, more than ever, Indigenous peoples and some members of Parliament are urging Canada to adopt the initiatives laid out in these documents.

In an interview with CTV, the National Chief of the Assembly of First Nations, Perry Bellegarde, applauded this acknowledgment as an essential first step, while urging Canada to follow up on its promises. He explained the need for Canada to reorient police funding towards cultural education programs as well as greater Indigenous representation on policing boards. In addition, Bellegarde hopes the RCMP’s program of Indigenous policing will become an essential service on more rural reserves, with adequate funding and culturally relevant training. He also stressed the importance of fully adopting the reforms declared in the NIMMWG, advocating increased support for addressing disparities in access to healthcare — explicitly citing mental health initiatives — and combating the socio-economic inequalities present in education and employment opportunities.

Earlier in February, amid the Indigenous-led railway blockade of a British Columbia pipeline, the Trudeau government requested $2.1 billion more in spending on Indigenous issues, with $232 million for health services, and $588 million in funding for childcare and family services. Importantly, this subsidy would relieve Indigenous communities of $919 million of debt acquired during land negotiations with the government, giving them more freedom and flexibility to spend the new money according to their own budgets. As a continuation of the Trudeau government’s 2019 promises, this new spending received cross party support, with conservative Treasury Board member Tim Upaal stating, “we will continue to use our strengthened opposition to ensure that any new funding for Indigenous programs, projects and initiatives is used to make real and measurable improvements.”

The First Nations Policing Program was said to receive a $52.9 million increase in order to hire more officers with better training and to make them accessible on all reserves. Moreover, it is important to note that the RCMP’s First Nations Policing Program allows Indigenous peoples to choose between a self-administered police force or a standing Police force provided through the Community Tripartite Agreement, the systemization of which is negotiated by Indigenous, provincial, and federal officials. Although this increase in spending is welcomed and applauded by nearly all parties involved, many critics claim that forms of systemic racism perpetuated by the RCMP have yet to be holistically or adequately addressed.

In response to deaths at the hands of the RCMP,  NDP leader Jaghmeet Singh recently made a motion for the house to acknowledge systemic racism in the RCMP, to further encourage talks of investigation and reform. This decision was not unanimous as the Bloc Quebecois (BQ) stated its intentions to wait for the committee that was created to investigate this matter to publish its results. The BQ’s denial angered Singh, who was asked to leave Parliament after calling MP Allain Therrien a racist.

Although the debate is heated and slow-moving, there now seems to be more political will in the Trudeau government to begin work on reconciliation with the First Nations who have pressured the Canadian government for years. In light of these new developments, many Indigenous people feel they should proceed with cautious optimism in future negotiations with the government. Still, one thing is certain: to free themselves, Canadian First Nations — with support from allies in Ottawa and the rest of Canada — must continue pressuring the Canadian government to take the necessary steps beyond acknowledgement, and call them directly into action.