The Fujimori Pardon: A Case of Treason, Impunity, and Systematic Lies 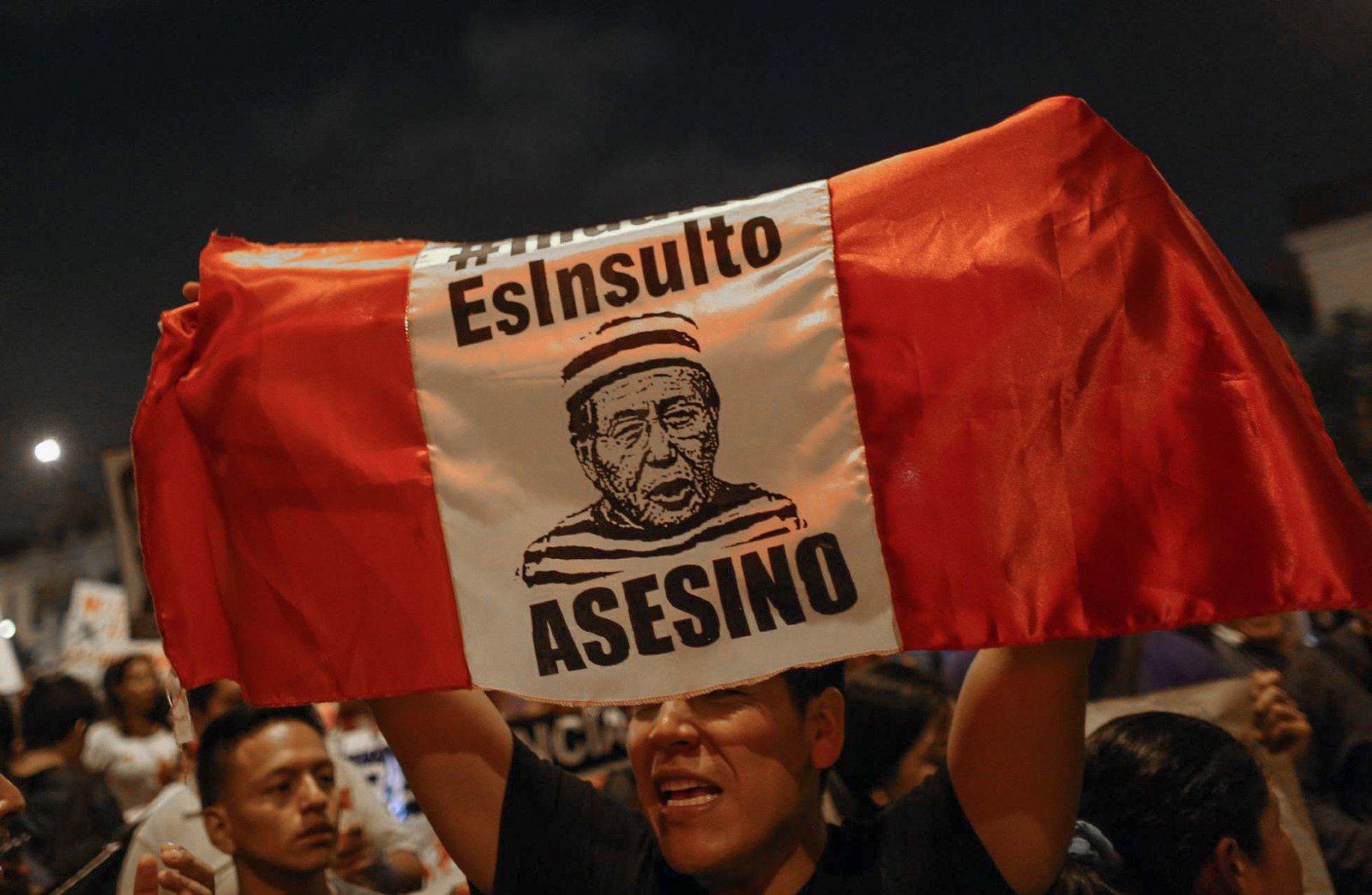 Following the erratic political crisis caused by the impeachment proceedings against Peruvian President Pedro Pablo Kuczynski (PPK), the information revealed on Christmas Eve marked the beginning of another closely linked, yet immensely more complicated, predicament. After having sworn on countless occasions that his government would never grant a humanitarian pardon to former dictator Alberto Fujimori, PPK did precisely that, only a couple of days after saving his political skin in Congress, under the pretext of national reconciliation. Convicted of numerous human rights violations and sentenced to 25 years of imprisonment, Fujimori had only spent a decade in Barbadillo, a police base with a luxurious cell that was specially built for him. According to a survey recently published in Perú21 (one of the leading newspapers in the country), only 20% of the population approves Kuczynski’s tenure and roughly 78% believes the pardon was a quid pro quo; in other words, that PPK negotiated Fujimori’s pardon in exchange for his continuity in office. Immediately after the pardon was made public, thousands of protesters took to the streets both in Peru and around the world in cities such as Sydney, Madrid, Rome and Montréal; outraged at the indulto de Navidad (“Christmas pardon”). Judging by the reception of the news, however, the Peruvian people now have a unique chance to vindicate what French historian Pierre Nora calls “historical memory.”

The last two decades of the twentieth century constitute one of the darkest periods of Peruvian history. What was later baptized with the name “internal conflict” started on May 17th, 1980 when a so-called Marxist-Leninist-Maoist terrorist group called ‘Shining Path’ burned ballot boxes in the Andean village of Chuschi, Ayacucho. Mesmerized by the deep sociopolitical transformation that represented China’s Cultural Revolution (1966-1976), a professor from the San Cristóbal de Huamanga University named Abimael Guzmán (who made his followers refer to him as Presidente Gonzalo) indoctrinated thousands of Peruvians who felt betrayed by the State and convinced them that the only way to change their condition was to overthrow the political regime and reconfigure Peruvian classist society. What followed was a series of gruesome terrorist attacks, which predominantly started in rural areas they called “guerrilla zones” and gradually extended to the cities. But unlike Mao Zedong, Guzmán orchestrated the whole revolution from the tranquillity of his followers’ residences and, apart from entrusting them with his extremist doctrines, his diatribe against the system aligned with an idolization of himself. At its core, Shining Path cultivated a deprecation of human life that resulted not only in the deaths of its enemies, but also of its members it had professed to defend—notably, the 1983 Lucanamarca massacre consisted of the killings of 69 peasants by the guerrillas of Shining Path and established a pattern for further mass attacks.

Of course, Shining Path’s bloody insurgency had to contest with the counterrevolution led by Alberto Fujimori’s government during the decade of 1990-2000. As the conflict escalated, the Fujimori administration maintained that the Legislative Power unnecessarily protracted anti-terrorism legislation and that it was an obstacle to its military strategy. Consequently, Fujimori put into effect his meticulously-planned dissolution of the Congress on April 5th, 1992, as well as the abolition of the Constitution. In Ellen Perry’s documentary The Fall of Fujimori, an exiled Fujimori gloriously reminisces: “I had the opportunity to go out on the streets on April 6th, 1992. There was a multitude, a huge crowd. Everyone […] approved the measure. They supported me… And again they cheered ‘Long live the Chinaman!’” (Note: in Peru people of East Asian origin are invariably called chino).

In effect, the aforementioned constitutional crisis—also known as the 1992 auto-coup—was allegedly received with public acclaim by the vast majority of Peruvians. This allowed Fujimori to draft a new Constitution the following year, which is used to this day. Nonetheless, given his absolute control of the democratic apparatus, Fujimori established a kleptocratic regime in which he embezzled billionaire public funds, curtailed the institutions, as well as the rule of law and the press, ordered the execution of both suspected and innocent Peruvians, and even forced indigenous women to undergo sterilization. He had finally become the dictator.

In their BBC article “How to Subvert Democracy: Montesinos in Peru,” John McMillan and Pablo Zoido illustrate how Fujimori projected a halo of transparency by entrusting his advisor Vladimiro Montesinos—who was also the head of the National Intelligence Service (SIN)—with the cumulative acts of corruption. Through Montesinos, Fujimori was able to bribe the main political, judicial and media-related stakeholders of the ’90s, thereby fabricating a rampant, all-pervading dictatorship whose residues are still palpable more than 17 years later.

After having escaped from Peruvian justice and unsuccessfully trying to resign his presidency from Japan via fax (after all, he did make use of his Japanese roots), the Congress impeached the fugitive and, in 2007, extradited him from Chile back to Peru. The Fujimori trial had started and the former dictator was found guilty of multiple violations of human rights committed by Grupo Colina, a military death squad that operated under his orders. His conviction included the murder of a professor and nine students at La Cantuta massacre (1992), as well as the shooting of 15 people in Barrios Altos (1991), and the kidnappings of journalist Gustavo Gorriti and businessman Samuel Dyer. It is also important to note that, according to the German NGO Transparency International, Fujimori is the seventh most corrupt president of all time, as he amassed a fortune of roughly USD 600 million.

Indeed, Fujimori’s trial was an unprecedented event in Latin America. In the past, our dictators either passed away in the comfort of their mansions or were killed in the wee hours of the night. The fact that it was the first time a democratically-elected head of state like Fujimori was impeccably sentenced in a trial that met international standards was instrumental in restoring trust in Peruvian justice.

Without these facts, it is impossible to understand the pardon in its full complexity. In truth, PPK’s decision can only be interpreted as a shameful political bargain. Only three days before his announcement, he narrowly avoided what some called a “parliamentary coup d’état.” Fuerza Popular, the opposition party which holds a majority in Congress and whose leader is Fujimori’s daughter Keiko Fujimori (who has already run for president twice without success), had been the impeachment’s most fervent advocate. The argument revolved around Kuczynski’s “permanent moral incapacity” due to his ties with Odebrecht (a Brazilian conglomerate involved in a myriad of corruption scandals). However, in what has since been portrayed as a providential turn of events, Kenji Fujimori—the younger and closer son of Fujimori—put away his partisanship and, together with 10 other legislators from his sister’s party, voted against the impeachment. Kenji’s high spirits betrayed him and he tweeted a scene from The Lion King with the comment: “The time has come.” He had saved Kuczynski and it was time the latter gave him what he had promised.

On February 2nd, the bereaved families of Fujimori’s regime testified at the Inter-American Court of Human Rights, an independent judicial institution based in San José, Costa Rica which oversees the respect and promotion of human rights in the Organization of American States (OAS). Fully aware that the pardon is a flagrant miscarriage of justice, these incessant defenders of truth and humanity want to preserve the dignity of those who were taken from them. Carmen Amaro, sister of Armando Amaro, who was a victim of La Cantuta massacre, said: “We hope that Fujimori goes back to prison to serve his sentence […] This isn’t hatred or revenge… It’s justice.” She is one of the many relatives who have not been heard by the President, despite having requested so months ago.

Today, Peru remains a fundamentally divided country where it is easy to lie and hard to believe. PPK alleges that there was no win-win deal under the table and that it is all an invention of extreme, leftist groups; a lot of Peruvians are adamant that Fujimori liberated the country from terrorism; and new impeachment measures against Kuczynski are in the making. But in the end, from the determination and resilience of the millions of Peruvians who are truly loyal to their historical memory, a new, fairer order will arise. For there will be no reconciliation unless justice takes precedence over impunity.