Gay and Afraid: What South Korea Taught Us About the Dangers of Contact Tracing 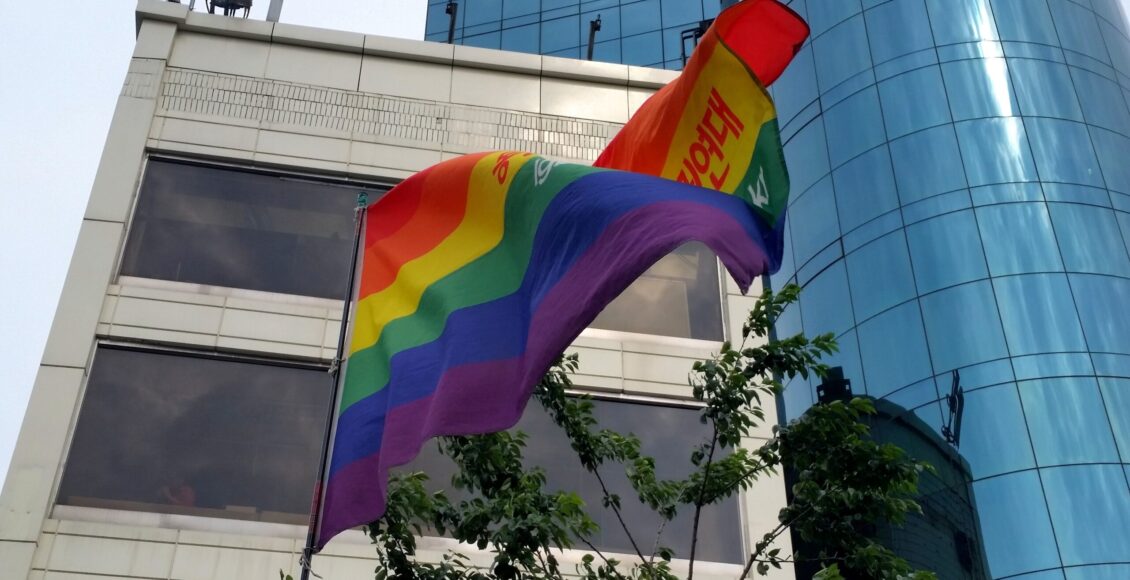 LGBTQ+ flag at the 2015 Seoul Pride Parade, a major event for LGBTQ+ visibility in South Korea, “LGBT Pride Parade” by Cezzie901 is licensed under CC BY 2.0.
Share

South Korea’s rapid response to the COVID-19 pandemic attracted worldwide praise, establishing the country as a blueprint for successfully containing the virus through contact tracing and mass testing. Although South Korea has managed to keep its daily case increase low and 10,194 out of a total 11,165 cases have so far recovered, an ongoing threat of clusters originating from so-called “super-spreaders” remains. This threat has pushed South Korea into more innovative and invasive digital contact tracing methods, such as gaining access to GPS records and card transactions to alert the public to possible exposure. Many human rights groups have underlined possible issues related to further rollouts of invasive digital tracing methods, particularly how negligence toward privacy in the instrumentalization of personal data could pose a danger to minority groups, more specifically to the LGBTQ+ community.

On May 2nd, a 29–year–old man who tested positive for the virus reportedly visited multiple clubs in Itaewon, South Korea, an area known in Seoul for its LGBTQ+ nightlife. This instantly raised fears that thousands may have been at risk of contracting the virus. As information regarding the cluster was released to the public, many media outlets described the venues as “gay clubs” and attempted to specify the age, occupation, and even identities of these 5,500+ at-risk individuals. As the LGBTQ+ community became an easy scapegoat for this cluster of cases, some of these individuals could not be immediately contacted, refusing to disclose themselves out of fear of persecution.

A similarly angled narrative was pushed early on in February, instead surrounding a “super-spreader” from what was described in the media as a “cult,” with the ensuing backlash serving as an early warning on the dangers of pointing fingers at specific groups. The LGBTQ+ community’s implication to the most recent cluster resulted in calls to close down these clubs, along with reports of multiple individuals, with no direct correlation to the May 2nd outbreak, having their personal data leaked through gay dating apps like Grindr.

South Korean Prime Minister Chung Sye-Kyun asked the public to avoid “criticizing a certain community as it will not help efforts to contain the coronavirus spread”; not going as far as explicitly acknowledging the particular risk to the LGTBQ+ community. That being said, scapegoating is not a new occurrence for the LGBTQ+ community: members have long fallen prey to ill-informed medical discrimination and prejudice, often as a result of the stigma surrounding the AIDS epidemic.

In a socially conservative country such as South Korea, where there is an absence of comprehensive anti-discrimination laws that protect LGBTQ+ individuals, a virus that does not discriminate can easily become a catalyst to deepen existing societal prejudices.

The LGBTQ+ community has faced a history of institutionalized medical stigma as a result of the AIDS epidemic, with its ongoing legacy of societal and health consequences felt worldwide. According to Chenard, LGBTQ+ individuals suffer from a “dual stigma.” They are more likely to be HIV positive and disproportionately suffer from homelessness, depression, and suicide because of discrimination, among other factors. Although the current pandemic concerns an entirely different virus, data collected from state-sponsored contact tracing tactics used to contain COVID-19 can become politicized much like the AIDS epidemic.

By attributing the outbreak to “gay clubs,” South Korean media outlets have played into a narrative that scapegoats a community already facing institutionalized medical and professional discrimination. The LGBTQ+ community is an easy target for those that already believe such a “lifestyle” is immoral, fitting into a storied narrative allowing individuals to deflect blame onto an already marginalized group. Not only is this narrative dangerous because it encourages discrimination towards LGBTQ+ individuals, it also undermines health initiatives by inhibiting the testing of individuals that have come in contact with confirmed cases because of their fear of persecution.

Due to the politicization of personal data, advice from health experts must now compete with misinformation. In light of this, as other countries look toward implementing contact tracing apps as a “be all end all” solution to social distancing, they must consider — regardless of other benefits or their intentions — how the dissemination of personal data inevitably puts LGBTQ+ individuals at risk. Governments must not be complicit in allowing media outlets to push narratives based on data that individuals have provided, especially when dealing with a community that has long suffered as a scapegoat because of such institutional negligence.

What efforts can be made to protect minority groups?

How should LGBTQ+ individuals worldwide feel comfortable giving states access to their personal data and permission to disseminate it freely? Although South Korea and other countries, like the UK, are opting for a centralized system of digital contact tracing, where anonymous data collected from Bluetooth devices is stored on a central computer server, countries like Germany, Switzerland, and Austria have pursued a more decentralized approach. In developing a decentralized system of contact tracing, Apple and Google argue that transferring data directly between bluetooth devices would limit the power of hackers or governments to harness private data from a central server, possibly at the expense of having a more accurate account of COVID-19’s spread.

This brings us to a central dilemma. Does valuing individual privacy and security necessarily come at the expense of public health? If minority groups that have experienced institutionalized discrimination do not trust that these apps will protect their privacy, then unless it is made compulsory — like in South Korea — many will refuse to use them. Having established the consequences of mandatory contact tracing on the LGBTQ+ community in South Korea, is this a model that other countries should wish to replicate?

With estimates in the UK saying that these apps would need at least 60 per cent national usership to be effective, the cost of alienating minority groups is greater than just their fear of persecution. Fear also affects a state’s ability to track and contain future clusters in the hopes of ending social distancing. British Health Secretary Matt Hancock argued that “we cannot afford to not use [contact tracing apps],” and that “all data will be handled according to the highest ethical standard.” Others argue that invasive technology is not necessary for effective contact tracing, with countries such as Iceland emphasizing a more secure manual process.

In the interest of both minority groups’ security and each state’s COVID-19 containment initiatives, efforts are needed to strike a balance between individual privacy and maintaining the effectiveness of digital contact tracing apps.

Featured Image: LGBTQ+ flag at the 2015 Seoul Pride Parade, a major event for LGBTQ+ visibility in South Korea. “LGBT Pride Parade” by Cezzie901 is licensed under CC BY 2.0. No changes made.