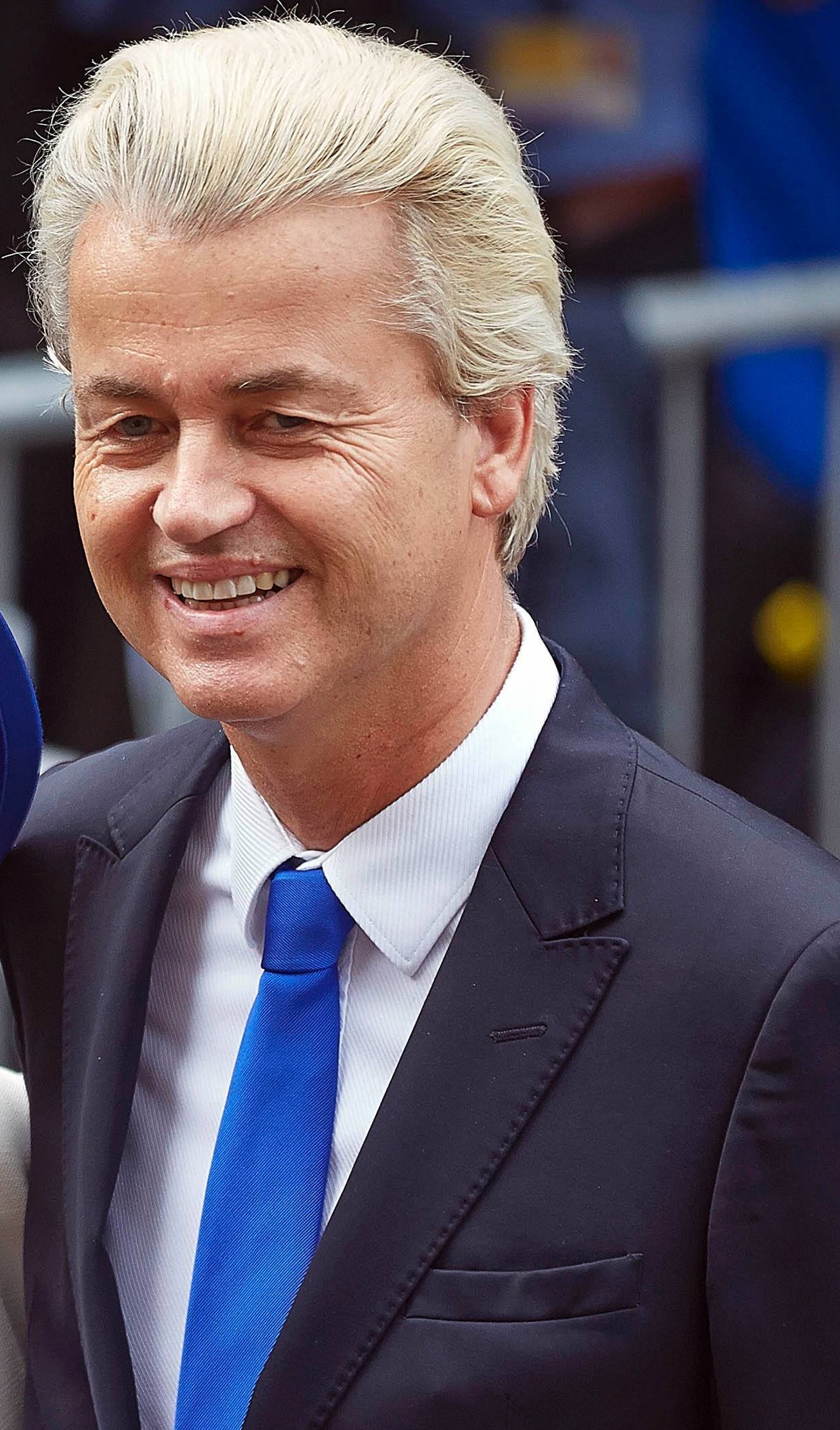 Prime Ministerial hopeful poses for a photo in 2014. http://bit.ly/2mnp5Yw
Share

“Islam is not a religion, it’s an ideology: the ideology of a retarded culture.”

Bombastic comments spew left and right as they emanate from a shock of peroxide blond. Hundreds of supporters latch onto every word, soaking up the blatantly Islamophobic rhetoric. No, I’m not talking about the deranged U.S. President.

On March 15, 2017, the world will once more see an attempt of the new radical right to gain traction—again, in the form of an obnoxiously blond bouffant topping an overly-zealous and anti-Islamic demagogue. March 15th marks the 2017 Dutch general election, which will give rise to the arrival of a new Dutch Tweede Kamer, or House of Representatives, and the scuffle for prime ministerial leadership. Sharing more than just hairstyle, Wilders and Trump have been widely compared in mainstream media, from policy to personality to shady finances, with MP Wilders being hailed a “Dutch Trump” at every turn. However, if the two politicians are examined more closely, it becomes glaringly apparent that Wilders is by far the more dangerous politician.

Let us examine the central uniting factor in both men: Islamophobia. Both use anti-Islamic sentiment as a political mechanism to garner the support of specific sectors in the population, feeding off of and exploiting underlying national fears. Such crooked manipulation of the public’s emotions has clearly worked for both, and has thus dominated both the Dutch and American election narrative. However, where they differ is the extent to which such flagrant rhetoric has been circulated. Whereas Trump has mainly focused on protecting American safety from what he views as an inherent link between Islam and terrorism through immigration policies like the “total and complete shutdown of Muslims,” Wilders has taken things not just one step further, but a whole leap off the cliff of mainstream reason—waging a full-blown war on all aspects of Islam. While much of North America is still reeling from the shock of the clearly Islamophobic immigration ban, it is important to realize that the sentiment in the Netherlands is of an even more frightening proportion.

Wilders has even moved to legally mandate white cultural superiority by promising to repeal Article 1 of the Dutch constitution, which guarantees equality under the law, through a clause stating the cultural dominance of the Christian, Jewish, and humanist traditions. Trump, for all his senseless and shameless tweets, has not even dared to go that far. Wilders has further proposed an unabashedly offensive “Head Rag Tax”, an obvious attack on religious freedoms designed to discourage Muslim women from wearing a headscarf by requiring them to register for a permit first, which would cost them €1000 a year. He has also proposed a five-year moratorium on the immigration of non-Western foreigners, and on the founding of new mosques and Islamic schools. Other proposals in his official political manifesto include removing the right to vote in municipal elections for foreign residents, a permanent ban on preaching in any other language than Dutch, and banning foreign imams from preaching. And, as if to put the proverbial ‘icing on the cake’, Wilders has brazenly equated the Qur’an to Mein Kampf. Trump, in comparison, appears as an almost-inconsequential little brother on the issue of Islam.

In addition to anti-Islamic sentiment, having a thin skin seems to also be a defining attribute of both leaders. Both take to Twitter to express their intense misgivings about the media. Trump often appears like a petulant child, in speeches and addresses, perennially complaining about the supposed electoral unfairness, or the bias and fake news of the media. Wilders, again, takes these reactions one step further. In fact, just last November, after former Labour Party member Jack Kicken “insulted” Wilders on Twitter, Wilders decided to press charges immediately. For Wilders, free-speech seems to be a “flexible” right; one that only matters for expressions of support, and for his own public derision of Islam and Muslims.This is a type of selective democracy that even Trump has not engaged in.

Both Trump and Wilders also aim to appeal to voters and supporters in a similar way: by referring to an old, almost-mystical and nostalgic sense of a tradition of excellence that conveniently aligns them with a glorified past and distances them from blame for the problems of the present. Just as Trump built his presidential campaign around the slogan “Make America Great Again,” Wilders similarly entertains ancient Dutch dreams of reuniting Flanders and the Netherlands, and appeals to old Dutch cultural superiority. Both politicians appeal to populist politics, claiming to work for the common man: the average Joe for Trump, or Henk and Ingrid for Wilders. Both are also vehemently anti-establishment. However, where they differ in political mechanism is exactly what makes Wilders potentially more dangerous than Trump could ever be.

Trump growing out of the diverse cacophony that is American society and American politics is slightly more understandable than a radical Wilders growing out of what is traditionally regarded as the peaceful and bourgeois Dutch society, and one of the most “tolerant countries in the World.” Trump does not seem to have coherent policy, especially when he is at his most flagrant, jabbing at issues left and right with no clear political ideology or position. Wilders, on the other hand, has a certain deviousness to him that is clearly manipulative and ugly. He uses the Dutch national identity of tolerance against Muslim acceptance and as a tool to perpetuate Islamophobia, claiming that Islam exists as a threat to Dutch civilization because its believers supposedly hate homosexuals and believe in the inequality of women. With Trump, there is a certain sense that he is plainly ignorant and solely focused on business, while Wilders seems to have very focused and targeted policies, appearing purposefully and shamelessly malevolent.

Their backgrounds may also serve to differentiate the two politicians. Trump was born into extreme wealth, growing up with a privileged childhood, and later a business-orientated life. Conversely, Wilders comes from a traditionally Roman Catholic family, in the rural Limburg province, which has been lagging economically since coal mine shutdowns in the 1980s. Not only that, but his mother’s family is Indo, that is, from the Dutch East Indies, or modern day Indonesia. This portion of the Dutch empire has historically been notably conservative and hostile to Muslims, as they looked to distinguish themselves from the “Natives,” a sentiment that was only further inflamed when they were ejected from the country post-WWII by President Sukarno. This unique background only gives Wilders further incentive to pursue his radically anti-Islamic policies.

Despite all of this, one could still argue that Trump, at the present time, is more of a threat, seeing as he is already in a position of power. However, Wilders’ staying power has proved to be strikingly resilient. He has consistently had significant government influence since being first elected to Dutch parliament in 1998, and has established a strong and formalized role for the PVV in the Netherlands’ coalition government since its founding by Wilders in 2006. He has also shown an uncanny ability to influence other parties’ platforms to a frightening degree, shaking the Dutch political atmosphere to unprecedented extents. He has even forced the incumbent conservative-liberal prime minister’s hand on the issue of Muslim immigration and tolerance, resulting in PM Rutte imploring Dutch immigrant citizens to “act normal, or go away.”

For all his efforts, Wilders’ strategy seems to be working. He now leads in most polls, just one week ahead of the election, and his support does not seem to be waning. The election of a radical right leader appears to be imminent, and it is indeed a chilling thought. If Wilders does succeed on the 15th, it most likely will result in an unstable coalition of four to five centre-right and centre-left parties, clamping down on Wilders’ ability to pass legislation effectively. Either way, we North Americans must take our heads out of the murky Trumpian sand and pay attention: Trump is not an isolated incident. The rise of the new radical right in Europe has never been more significant.