Germany Under the Gun: The Far Right’s Threat to Democracy 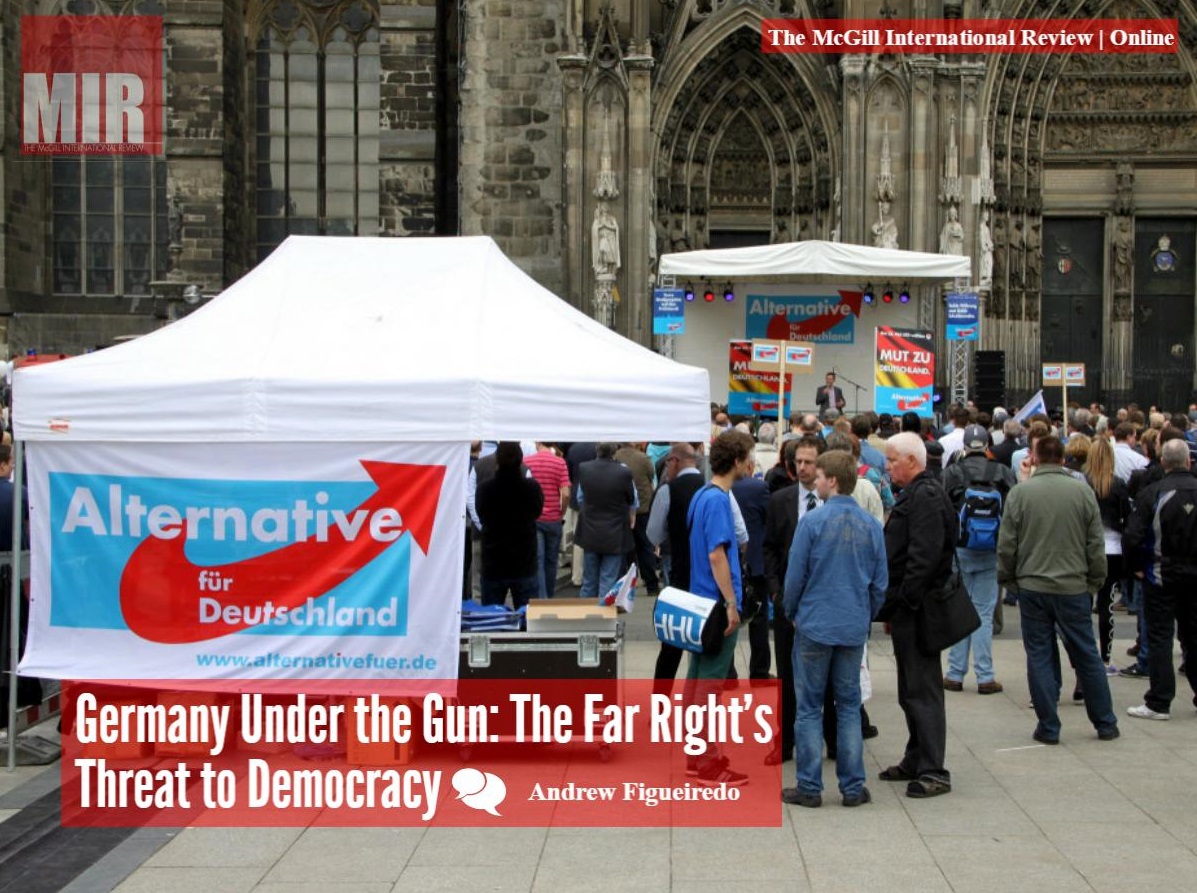 German Chancellor Angela Merkel has widely received praise among observers in other parts of Europe and North America. However, in recent months it has become clear that Merkel’s record remains incredibly controversial in Germany, with a poll showing her registering her lowest ever approval rating. Security concerns have been elevated to the forefront of the national consciousness following terror attacks in France and Germany, leading many to support clamping down on groups seen as “outsiders”.

It is within this context of opposition that far-right political party Alternative für Deutschland has soared in recent polls. In mid-July of last year, the Pollytix polling average showed AfD at 3.4%. On October 1st of this year, the same average placed AfD at 13.5%, good enough for third place. Election results show that this rise is no mere blip in the polls. In the recent Mecklenburg-Vorpommern state election, AfD finished second, ahead of Angela Merkel’s ruling centre-right Christian Democratic Union party and just behind the centre-left Social Democratic Party of Germany. Mecklenburg-Vorpommern is Angela Merkel’s home state, so to see her party suffer such a great loss there is frightening.

Skeptics would note that AfD is not likely to ever approach a parliamentary majority or even a governing coalition. The odds that any other party would actively reach out to AfD are incredibly low, considering how far-right they are. However, this line of logic fails to reassure because it ignores the nuance that defines political interactions. An extremist party doesn’t have to be in power to negatively affect the values of liberal democracy.

AfD’s danger stems in part from the sheer extremism of its supporters. Germany’s history has generally overruled the rise of extreme nationalism. However, the recent backlash to refugees demonstrates a worrisome lurch to the nationalist right in Germany. AfD’s relatively extreme platform includes diatribes against Islam, calls for closed borders, and even the idea of leaving the EU. While AfD’s platform represents a set of political goals that are likely to go unaccomplished, politics never exists in a vacuum. Last January, AfD’s leader Frauke Petry voiced her support for police to shoot migrants trying to cross the border. What message does this put into the heads of disaffected, angry Germans? Political doctrine combined with outrageous statements from party leadership is bound to brew hatred. AfD’s virulent anti-migrant rhetoric contributes to tangible violence against migrants and more generally, Muslim Germans. An Amnesty International study points to an 87% spike in racially based attacks and a sixteen fold skyrocket in attacks on migrant centres from 2013 to 2015. Clearly, AfD doesn’t have to be in power to contribute negatively to Germany’s social fabric.

Additionally, the views espoused by AfD’s growing base are a menacing spectre for German democracy. Far from the mainstream, party supporters are much more likely than average Germans to express dangerously extreme ideas. A Friedrich-Ebert Foundation study reveals that 9.5% of AfD supporters back dictatorship compared to 4.1% of all German voters. A full 41.2% of AfD supporters believe that Germans are better than other nationalities compared to 12.1% of the general German population. Additionally, one of the AfD’s top party leaders wants to bring back a controversial term, the word völkisch, which is directly related to fascist ideas. This extreme rhetoric represents a shedding of the values normally held as defining characteristics of Western Europe. Gone from this rising movement are tenets of tolerance, compassion, and even democracy, replaced instead by a rabid authoritarian intolerance. Democracy only survives as long as people have faith in it as an institution. When radical movements begin to tear at the seams of society’s cultural fabric by promoting division and elevating authoritarianism, democracy is inherently at risk. Perhaps the most frightening thing about these anti-Democratic impulses is the fact that their influence is spreading.

Beyond posing a threat to democracy and tolerance in Germany proper, AfD can potentially contribute to a tearing apart of the entire European Union (EU). Support for a German EU exit is just 17% among the general German population, but nearly 66% among AfD supporters. This may seemingly negate the threat of a German EU exit, but the story of Brexit, in which 52% of the UK voted to leave the EU, shows how a seemingly fringe movement can come to dominate the EU debate. In the 2015 United Kingdom parliamentary elections, the United Kingdom Independence Party (UKIP), a right-wing populist outfit similar to AfD in some respects, won just one seat in parliament. On paper, UKIP exacted a low level of influence outside of government and lacked any official voice. However, UKIP, and its oft-controversial leader Nigel Farage, were the true impetus for Brexit. The general consensus is that UKIP’s nationalistic, isolationist rhetoric influenced former Prime Minister David Cameron’s move to call a referendum. While UKIP did not hold much power, the potential they demonstrated to dig into Conservative Party support convinced Cameron to court Euroskeptic voters. If AfD continues to rise in the polls, threatening the previously stable Christian Democratic Union’s leadership, it’s quite possible that generally Europhile leaders and parties will change their tune. If the situation gets truly dire, AfD’s rising influence could lead to a German referendum and potentially even a German exit from the EU, which could trigger the collapse of the whole European order. While the odds of such a scenario may appear low now, nobody quite knows to what the populist right’s rising stock may lead. A German exit from the EU would surely spell doom for the organization by sapping its credibility and tearing its cohesion. Especially in the wake of the destabilization Brexit brought about, Germany plays a crucial role in holding the EU together, promoting policy goals and fostering cooperation on a host of issues. Europe cannot afford the loss of Germany from the EU.

AfD poses an acute threat to Germany and Europe, even if on paper the party does not appear powerful. The very foundations of European democracy and Western liberal order are based on compassion and openness, not divisiveness and violence. Since the fall of the Berlin Wall, Germany has been a paragon of human rights and a leader in the global community. Sadly, the rise of AfD risks serious damage to Germany’s status as a well-respected democratic power.