Gideon Sa’ar, Marco Rubio, and the Case of the ‘Cool’ Conservative 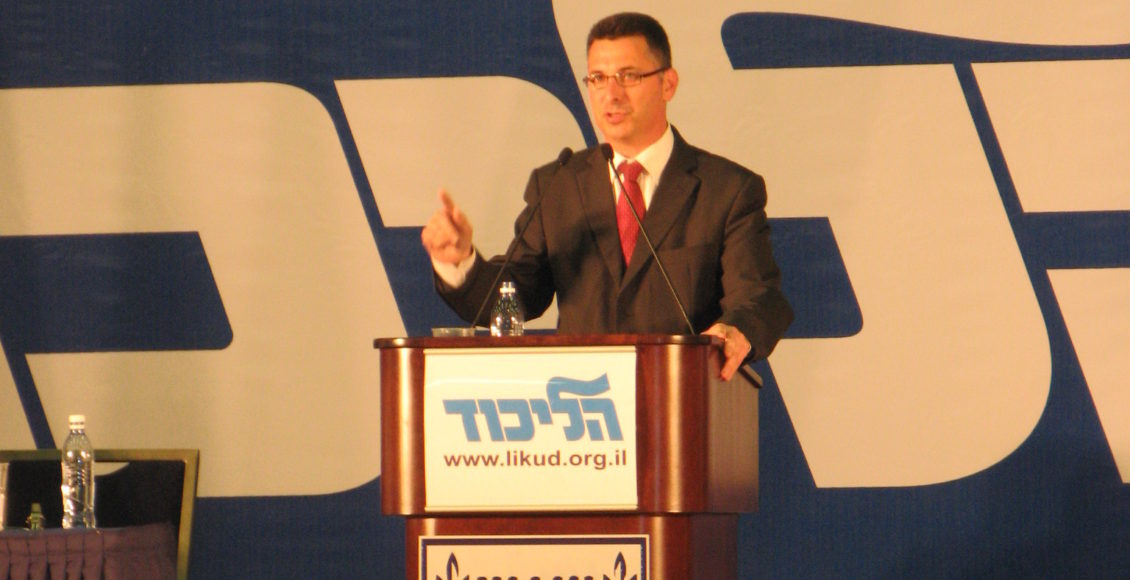 On December 26, Israel’s ruling Likud Party held its pre-election primary, in which its membership voted to determine a party leader for the upcoming elections—the third round this year. Defending the position was current premier Benjamin “Bibi” Netanyahu, aspiring to a fifth term in office while saddled with recent indictments for bribery, fraud, and breach of trust. Competing against him was Gideon Sa’ar, a former minister in Bibi’s own cabinet, and an establishment figure who argued that the party needed to distance itself from a tainted Netanyahu as quickly as possible.

Ultimately, Sa’ar’s pitch for prudence fell flat, smothered by a loyalty to the Prime Minister that enabled Netanyahu to win with over 72% of the vote. Yet Sa’ar’s (in)ability to draw support from within his party ranks has never been the story. What is worthy of further analysis—and arguably, what drove him to challenge his own former boss in the first place—is the degree of interest the lawmaker receives from outside of the Likud’s ideological bounds. Indeed, while Gideon Sa’ar aspires to one day inherit the right-wing reins of Israeli government, his social life and personal story seem adorned with the typical trappings of the left. That dichotomy—between his politics and his person—is perhaps what made registered party members skeptical of his ability to succeed Netanyahu last week, but it is also what keeps his future in broader national politics intact.

According to an in-depth exploration by Haaretz’s Anschel Pfeffer, Gideon Sa’ar is, to be clear, an unflinching Israeli rightist. As a teenager, he was a leader in the youth wing of the Tehiya party, founded by former Likud members of Knesset who could not stomach Menachem Begin’s return of the Israeli-occupied Sinai Peninsula to Egypt. In the late 1990s, when Tehiya dissolved in the wake of its opposition to yet another peace conference, Sa’ar joined up with the Likud. He would ultimately serve as a Member of Knesset and the party’s Floor Leader under Likud premier Ariel Sharon. But, when that Prime Minister spearheaded Israel’s withdrawal from the Gaza Strip, Sa’ar once again veered rightward, siding with the MKs who supported continued occupation while his boss formed a centrist party of his own.

Once the Likud returned to power in 2009, Sa’ar rode in on one of the list’s highest spots, soon becoming the Education Minister. From that post, he made school tours of West Bank settlements mandatory and helped to establish Ariel University, an institution of higher learning located within the eponymous settlement. And even when Sa’ar’s popularity began to irk Netanyahu and the rivalry between the two men resulted in the former’s hiatus from politics, Sa’ar never criticized Bibi’s nationalist policies from the sidelines. In fact, as Anshel Pfeffer writes, he has only ever bemoaned the Prime Minister’s lack of action on them. All of this is to say that, politically speaking, Sa’ar is not only able to follow Netanyahu; he would actually be likely to pull his party even further to the right.

But where Gideon Sa’ar’s political history is unyieldingly right-wing, his personal profile actually corresponds much more closely with what one would expect to find on the Jewish left. On the surface, there is the basic fact that Sa’ar, whose original last name was Zarechansky, is an Ashkenazi Jew, with the same generational ties to Israel’s founding Labour Party as so many others of that ethnic ilk. The Zarechanskys’ ties were so deep, in fact, that his father served as the doctor at Kibbutz Sde Boker, the socialist commune on which Israel’s first (and staunchly Labour-Zionist) Prime Minister, David Ben-Gurion, himself had settled and later retired. While there, the elder Zarechansky acted as the founding Prime Minister’s personal physician. His son Gideon grew up receiving geography quizzes from the ultimate bastion of the Israeli Left.

In his adult life in Tel Aviv, Sa’ar has cultivated a peculiar identity as the man whose politics consistently butt up against those of his neighbours and baristas. Of course, Sa’ar is far from the only Ashkenazi Likud member (Netanyahu is another), but he is virtually the only prominent one who resides in the densely leftwing sector that is North Tel Aviv. He is such a rarity in his own party that Pfeffer refers to him as “the Tel Aviv Likudnik,” implying that he is the only one of his kind.

What’s more, Sa’ar has collected records since adolescence and continues today. He occasionally spends weekend nights as a DJ in Tel Aviv clubs. He is the only male in history to chair the Israeli Knesset Committee on the Status of Women and Gender Equality. Perhaps most interestingly, last year, Sa’ar’s daughter Alona began dating Amir Khoury, star of the popular Israeli show Fauda and an Arab citizen of Israel. The relationship drew vile criticism from the far right, who reached out to the former lawmaker and urged him to break up the couple in order to prevent miscegenation. Sa’ar defended his daughter and Khoury unequivocally, and simply ordered the activists to, “Get out of her private life.” His ex-wife, who Sa’ar met through a right-wing youth group, commented that the duo “made a lovely couple.”

It is tempting to interpret all these little signals—the upbringing, the personal connections, the music taste, the daughter—as signs of some deeper, intersectional liberalism. But the Gideon Sa’ar who DJs on the weekends is the same one who, as Interior Minister, dramatically reduced the number of sites on which asylum seekers could apply to be formally recognized as refugees in Israel. It is the same man who called on his own party to “formally abandon the idea” of a Two-State Solution. In this way, the “cooler” details of the legislator’s life act as sleek packaging for a still-unseemly set of principles. With this sort of misdirection, Sa’ar is positioned to pull fence-sitters from the centre into the Likud by appearing uniquely palatable. That palatability is something that Netanyahu has, after years of perceived despotism and three new indictments, decidedly lost.

The unconventional harmony between Sa’ar’s social and political identities is not unique to the Israeli political sphere. In fact, it is evocative of a tactic used (far less subtly) by another legislator in another country: United States Senator Marco Rubio. Indeed, Rubio often utilizes his ability to interact with the liberal-leaning world as bait for young and centrist voters. The Senator, too, comes from a background that lends itself well to this endeavour. Granted, his family is Cuban (a constituency that has historically voted Republican), but aides during his 2016 presidential run spun this identity into one that emphasizes his broader Hispanic and immigrant roots. He was accordingly able to charm America’s burgeoning Latino electorate while maintaining his opposition to, for example, amnesty for the children of undocumented immigrants.

Moreover, like Sa’ar, the Senator is youthful, at least by GOP standards. In 2016, campaign advisers told reporter McKay Coppins that Rubio would not be, “competing for who can be the whitest, oldest rich guy” in the party. Not only is that statement, in itself, reminiscent of the sort of scrutiny the Republican party often endures at the hands of countless young Democrats, but it bears mentioning that Coppins was then a writer for Buzzfeed News, a site that Pew research has confirmed overwhelmingly attracts left-wing readers. Choices like these underscore the basic deliberateness of Rubio’s interaction with left-leaning voters. He travels to those corners, bottles the essence of their politics, but carefully avoids the actual ideological substance.

And, in an interesting parallel with Gideon Sa’ar’s moonlighting as a DJ, Marco Rubio has spoken to TMZ on two separate occasions about his own passion for rap music. In one video, Rubio ascends an escalator while explaining the greatness of Tupac. In the other, he reiterates his love for Nicki Minaj, something he has also discussed in interviews for MSNBC. During his 2016 presidential run, the Senator made a Spotify playlist replete with selections from Kanye West, the Notorious B.I.G., and Jay-Z. Through all of these things, Rubio marketed himself as the “cool” conservative, loudly embracing pieces of culture that evoke progressiveness, while quietly shunning the progressivism itself.

Marco Rubio might love Nicki Minaj, but he also believes that those involved in abortions are the “Barbarians of our age,” who have “murdered millions of the unborn.” Gideon Sa’ar is cool with his daughter dating an Arab Israeli, but he’d annex the West Bank in a heartbeat. Beneath both these men’s veils of pop culture signalling lies a set of arch-conservative and right-wing policies, made all the more pernicious by their respective abilities to hide in plain sight. Each man exists in a different political system, with starkly different party leaders, constituencies, and issues at stake, yet they remain united by this two-level tactic. Both exploit the non-intersectional nature of their personal and political tastes in order to use the former to distract from the latter.

Gideon Sa’ar’s ambitions in politics have, like Marco Rubio’s, been halted for the time being. Yet with Bibi’s prosecution imminent and his reputation permanently mangled, the former minister remains relevant. He is considered by much of the Israeli media to be a kind of natural successor to the Prime Minister, if and when the septuagenarian makes his exit. Meanwhile, though Rubio might be taking the off-season to post Bible verses on Twitter, he remains an oft-floated name for his party’s 2024 ticket. When the next opportunity presents itself, the two men will almost certainly re-emerge. And when they do, their political prowess will come not from any Trump-ian flailing or Netanyahu-style rule-breaking. It will come from their calculated existences as human oxymorons—as the “cool” conservatives who have made camp on our cultural crossroads.