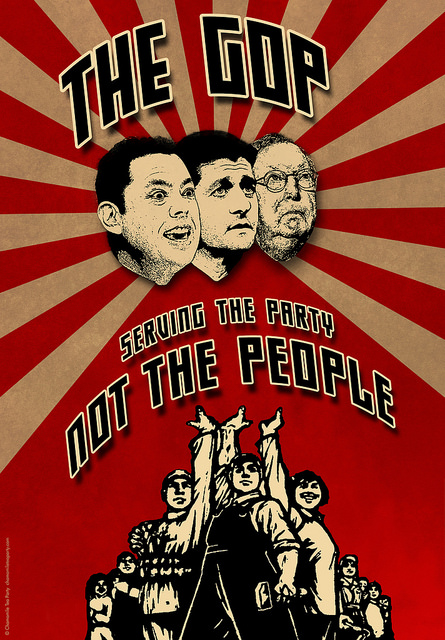 Many activists are upset with the GOPs moves on healthcare and the budget. https://flic.kr/p/S5n2HV
Share

The 1956 Republican Party platform calls for “reductions in taxes with particular consideration for low and middle income families,” brags about Eisenhower’s minimum wage increases, and calls for the strengthening of programs like social security. The 1950s and 1960s were an era in which both parties generally demonstrated legitimate regard for the American poor and working class. While they disagreed on the level of economic intervention to tackle poverty, both parties held a consensus on the need for good government to fight poverty.

Even much more recently, George W. Bush sought to take the Republican Party in the direction of compassionate conservatism, which combined a conservative small-government framework with the quest of combating poverty. His speech at Notre Dame in 2002 outlines his reasoning, including lines such as “It is not sufficient to praise charities and community groups, we must support them” and “Government has an important role. It will never be replaced by charities.” Bush’s approach demonstrated a level of concern for the poor, although through arguably less effective means than Democrats proposed. Poverty increased steadily throughout the Bush administration, spiking as the recession came about in the late 2000s. Already, the GOP had drifted far from its original course, and as the years passed and the party lurched further to the right, it abandoned its commitment altogether. Elected members of the Tea Party all too easily bashed the poor and sought sweeping cuts to anti-poverty programs.

Contrary to what some believed, populist Donald Trump’s election worsens this disregard for the poor. Instead of challenging the far right cabal in Washington, President Trump decided to fight for their ideas. The entire Republican Party is bent on benefiting the rich at the expense of vulnerable Americans.

Donald Trump, who promised not to cut programs like Medicaid and Social Security, is launching a full scale assault on the American people. The Republican Party recently introduced a healthcare proposal, which Donald Trump is said to be “pivotal in” promoting, called the American Healthcare Act (AHCA). This proposal, far from providing “insurance for everybody,” as Trump promised on January 15th, 2017, leaves an additional 24 million Americans without healthcare compared to the status quo. Five million poor Americans would be kicked off the Medicaid rolls, with 14 million fewer Americans registering for Medicaid coverage by 2026. The Republican proposal, as per the aforementioned Congressional Budget Office (CBO) report, would nearly double the amount of uninsured Americans. Republicans can try to run from the CBO report, but the facts are clear: the AHCA would prove detrimental to poor and working class Americans. The Republican Party has demonstrated an additional layer of contempt for the poor in trying to sell this proposal. Utah Republican Representative Jason Chaffetz notably told poor people to stop buying iPhones and to use  purchase healthcare instead, ignoring the prohibitive costs of care. This arrogant statement sums up the Republican leadership’s strategy: ignore the poor and attack their rights.

However, this assault on the poor is not only confined to the GOP healthcare plan. In the last week, the administration revealed its budget plans which represent not a populist track, but the mantra of cutting budgets at all expenses. Some of the programs cut are essential to helping the poor. The Women, Infants, and Children program, which helps feed nearly 8 million women and children, will be cut by $200 million. This program was expanded in previous administrations with both GOP and Democratic support, especially during the time of compassionate conservatism. Today, however, all bets are off. Programs in the Department of Housing and Urban Development that help 4.5 million people will be cut by $6 billion. This includes the slashing of programs directly targeted at solving homelessness, which is associated with a number of social costs. Another cut under this umbrella is the abolition of the Community Block Grant Development program, which provides grants to localities looking to finance city improvements. This program also funds Meals on Wheels, which feeds 2.4 million aging and often impoverished Americans. Instead of empowering, housing, and feeding the poor, the Republican budget seeks to crush, evict, and starve them.

Republican leaders have abandoned their historical commitment to fighting poverty. Even 15 years ago, a consensus existed that something had to be done about this issue. Ironically, today the GOP’s populist moment has not opened up a return to caring about the people. Instead, it has unleashed a new barrage on the poor. I would vouch to say that 99% of “lay” Republicans care deeply about fighting poverty. Some of the people I know who have made major impacts in this regard are indeed conservative. It’s time for the good Republicans to stand up and demand that their party stop undermining the vulnerable.