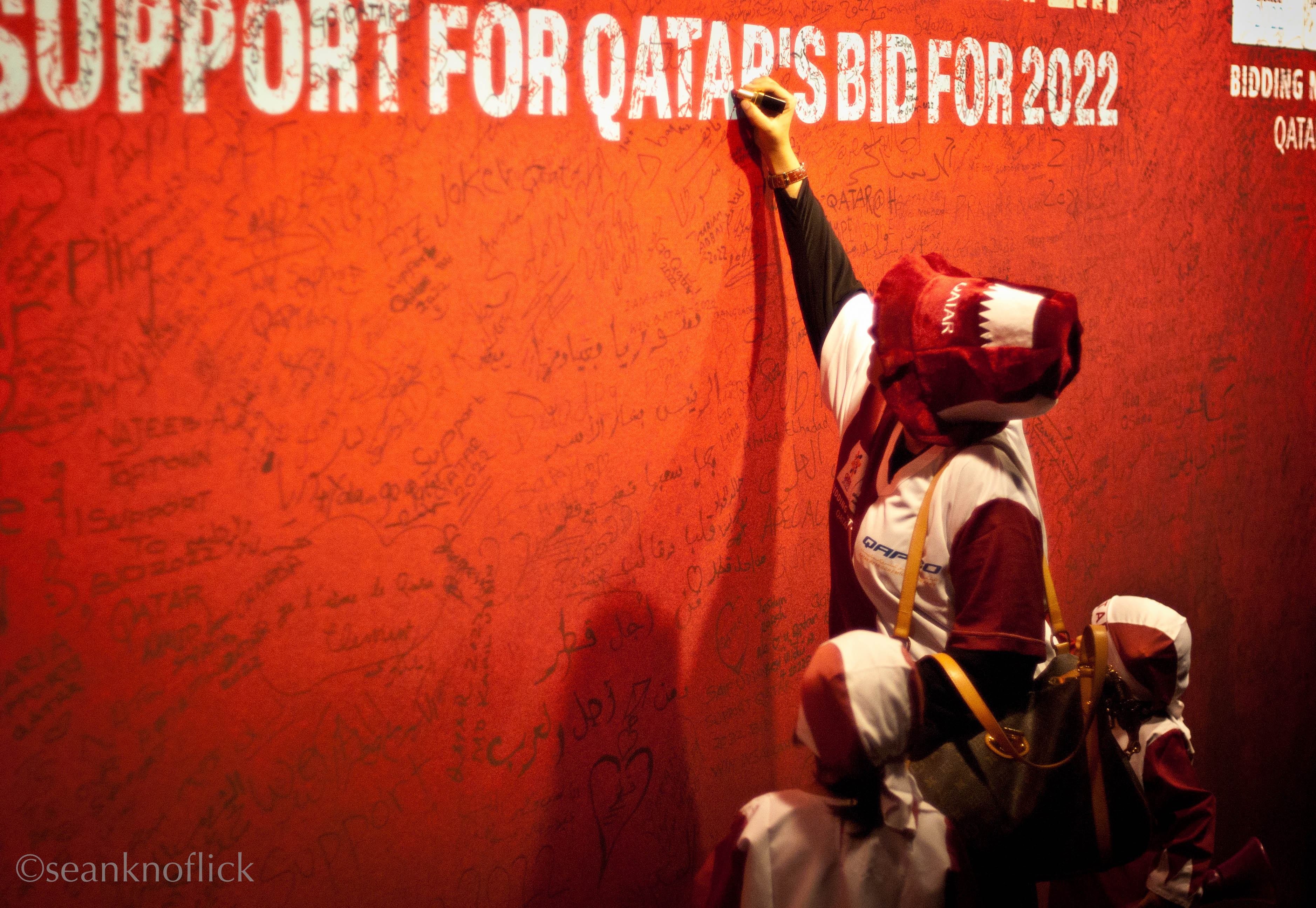 With the recently concluded 2015 Men’s Handball World Championship in Qatar came a sigh of relief as France grabbed the winning match against the host, and technically only 4/17th Qatari, squad. Surrounded by a cloud of controversy, a win by the Qatar team would have been engulfed in a spiral of criticism and the death of sportsmanship. Of course, this is nothing new. Some Gulf States are not exactly known for their willingness to step aside or play by the rules.

Taking a quick look back at Qatar’s history with sporting events brings us to the 2010 FIFA World Cup bid for 2022. Despite the numerous complaints about the inability to host the tournament in such drastic weather conditions, even more extreme than those posing grave scheduling and physical endurance difficulties at the 2014 World Cup in Brazil, Qatar managed to snatch the event without as much as a scratch. The lengthy bidding process included allegations of bribery of over 30 FIFA executives by the Qatari former FIFA vice-president Mohammed Bin Hammam and lead to a series of trials and investigations. Official FIFA reports claimed that the bribes were not to secure Qatar-inclined votes for the bid but were in fact part of a campaign by Bin Hammam to dethrone current president Sepp Blatter. This explanation left the world sceptical. Further inquiries into the provided documents later showed a direct correlation between the cast votes and the sums of money involved, leading to discrepancies in accounts across official reports. Meanwhile, despite the cries for a re-vote, Qatar continues to build a blood-shed pedestal for its prized World Cup event.

On top of the bribery allegations, Qatar has been recently involved in a human rights struggle in which current conditions were not taken into account during the bid held in 2010. The construction of its stadiums in preparation for the World Cup caused several deaths and led to reports on terrible working conditions and human rights violations in labor contracts of migrant workers on the building sites. Qatar has responded stating their willingness to implement labor reforms, including legislation on the ‘kafala’ sponsorship system. This system has been classified as a form of modern-day slavery by several human rights groups and becomes increasingly important for World Cup prospects with Qatar’s massive foreign workforce. Let’s take a moment to understand what this is: the ‘kafala’ is a law that limits the rights of movement of foreign workers under contract, enabling Qatari employers from preventing migrant workers from leaving the country or seeking new employment. These employers allegedly would have the ability to strip their workers of their passports and influence their ability to get an exit visa to leave the country, among others. The promise of reforms for early 2015 has, however, left most dubious once more. Little to no improvement was made thus far in terms of labor legislation, and yet the country continues to hire foreign workers to construct its dreams of 2022 glory. Despite this issue being in the spotlight from international pressure of not only human rights groups but also from states and FIFA itself, the world awaits for proper action in the next weeks.

Going back to FIFA, Sepp Blatter recently vowed to include several important human rights criteria in the evaluation for future bids, hoping to avoid similar complications. Blatter said that “[…] human rights and other rights will be part of the basic conditions to organize the competition. That will be new for the next World Cup – the World Cup 2026.” Unsurprisingly, this new decision will have no effect on the current Qatar holding of the 2022 edition. Whether this is truly FIFA trying to amend for previous costly mistakes or just a clever PR move to lift up the organization’s reputation for future business ventures and Blatter’s hopes of re-election remains to be seen.

Leaving FIFA-related scandals aside, the 2015 World Handball Championships gave us a valuable glimpse into the near future. We had here a Qatari-organized international sporting event, giving a priceless insight of the country’s seemingly pompous and privileged behavior, and yet it failed to make headlines. Just like the FIFA bid, bribery allegations surrounded the Qatari bid for the handball tournament and surprised the international community not only by winning the bid but also by coming out as a fervent handball supporter and one of the few non-European medal winners of the competition. Out of the four aforementioned Qatari players in the squad, none of them were in fact in the first-choice team. Most of the squad was formed with top players from Spain, Serbia and other countries, and were awarded dual citizenship, large winning bonuses and a lifetime pension for reaching the semi-finals. Of course, handball is far from being the most popular sport in the country, which resulted in the organizers going to the extent of ‘renting’ a crowd by bringing in people from Spain and paying migrant workers to sport Qatari shirts in support of the local team. None of these practices were illegal as the officials carefully spotted loopholes to exploit. Needless to say, Qatar was in it to win it. These actions prior to the tournament were not the end of it: another incident occurred after the quarterfinal Qatari win over Germany. Ticket-holders were left out of the stadium for both the quarterfinal and the semi-final games as officials opened seats to the general public for free, to ensure a prominent Qatari audience and a full house. This open-doors policy is not a first for Qatar and likely not to be the last. Of course, FIFA did not turn a blind eye on these actions as recent claims surfaced of Qatari sporting officials approaching foreign football players with offers to join the national team. President Sepp Blatter issued a warning in view of the 2022 World Cup: “Changing citizenship, in a way that allows players who have no link to a country to join the national team, is not in the spirit of our rules. For that reason, these practices have to stop immediately.” One might think 2022 is still far away and leaves room for change but Qatar was in fact also awarded in November the 2019 World Track and Field Championships, another global sporting event. The country is well underway to realizing its golden dream of becoming ‘the world’s sports capital’. How far can money go?

Qatar’s entitlement attitude brought in by its massive funds and business deals probably won’t stop here: it won’t be long before it spreads to other Gulf States. A prime example of this general movement is Saudi Arabia’s bid for gender-segregated 2020 Olympic Games. The state proposed a joint bid where the male edition of the Games would be held is Saudi Arabia and the female edition would be held in Bahrain. The prince of Saudi Arabia stated that: “Our society can be very conservative. It has a hard time accepting that women can compete in sports. Wearing sports clothing in public is not really allowed. For these cultural reasons, it is difficult to bid for certain big international events.” The rationale for this bid was to give the opportunity to more ‘conservative’ countries to host major events, given that they have the facilities and funds for them. Of course this bid was rejected by the International Olympic Committee for fault of not complying with non-discriminatory rules for a potential bid. “If this is not applied, the bid would not be admissible. Countries like Saudi Arabia must really work to allow female athletes to ‘freely participate,’” said IOC President Thomas Bach. “You cannot simply ‘outsource’ certain issues to another territory.” One would suspect Saudi Arabia knew very well of the existence of this clause and simply decided to push for the idea in hopes that international influence was enough to bend sporting rules and ethics.

The Saudi Arabia attempt is not really unexpected given the free pass to Qatar to access all major global sporting events thus far. Using influence and money to take advantage of capitalistic management of international sporting organizations can be tempting to other Gulf States. Their meddling could potentially jeopardize the fundamental building blocks of sports: fair play, freedom of participation, unity and tolerance.