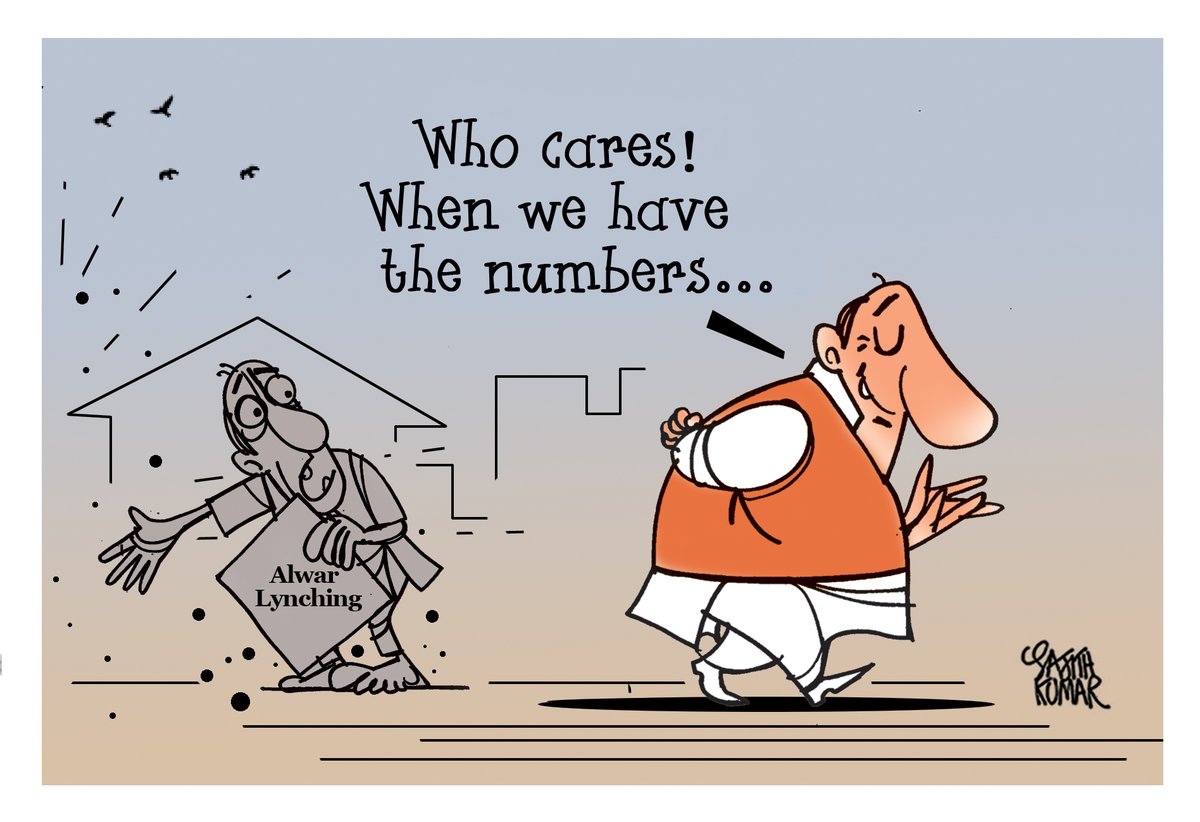 Indians are addicted to image and how they are perceived by outsiders. This obsession is also true when it comes to talking about the country itself. Any negative slights about the country lead to an online barrage of patriotic citizens  defending the glorious motherland. I too, despite never having lived there, love my country. That’s why I criticize it, in the hope of a better future. And speaking of future, I have some bad news. Poor policy-making, especially in recent times, is reducing India’s chances of a brighter future for herself and her citizens. And I don’t think people are realizing it, preferring to focus on the socially regressive agenda of the current administration. I will attempt to break down the several instances where India’s haphazard policy-making is occurring into three main segments: finance, infrastructure and society. I’ll also propose what I believe to be the underlying problem here: the eternally mismanaged disaster that is the education system.

Before I delve into what may look like a more erudite version of a rant, some things need to be made clear. I may be focusing on policies enacted by the current administration, since their use of ostentatious marketing tactics makes them the easiest barometer to gauge with. Previous governments have to take the blame too, since they created the conditions that have led us to this point. Indeed, quite a few policies of the previous Congress government were stalled by the BJP in order to extract political capital once they came to power. So there is a systemic fault that exposes our democracy as immature and still heavily dependent on caste equations to gain power rather than any so-called vikas (development). This systematic fault can be seen through such half-baked policy measures.

Many electoral promises were made with respect to modernizing the financial system and the economy. One of the biggest campaign promises was providing citizens with 15 lakh rupees in each bank account from all the black money stashed away in Swiss banks. Four years later, Swiss bank deposits by Indians have actually gone up by 50% after a three-year downward trend. A possible cause of this could be the loss in investor confidence and subsequent FDI growth rates are at a five-year low. Public sector banks, which are often the only source of credit in rural areas, have been clogged with bad loans and non-performing assets. This is not to mention also scandal-hit, as shown by jewellers Nirav Modi and Mehul Choksi defrauding Punjab National Bank of 1.8 billion dollars.

And I haven’t even touched the biggest economic policy plank of the Modi government: demonetization. In a cash oriented country, how could policy planners not anticipate the chaos that occurred while 86% of cash was out of circulation? Also, the Reserve Bank of India, which unlike other central banks is not independent, was slow in coming up with the replacement INR 2000, 500 and 200 notes. It definitely wasn’t worth increasing the tax base by around 1% while employment and productivity suffered. Even the Goods and Services Tax, which is a great idea in a country with a convoluted bureaucracy, was an opportunity for the BJP to score political points even though the actual bill was in the works since 2006. And as a damning signal to the country, the currency keeps on falling. Credibility, which is already at an unsteady footing post-demonetization, is evaporating fast. It seems to have gotten to the point to which the Finance Ministry actually needs to take a refresher course in basic economics!

Another component that India has muddled its way around is infrastructure. For such an image- and perception-obsessed country, it has practically been neglected. Post the 2014 election, a farrago of schemes was announced such as Digital India, Skill India , Make In India, Smart Cities. Take Skill India for example. The target was 400 million youth to be trained by 2022. As of 2018, less than 2 million have been trained. Also, eight out of ten skill development centers are nonfunctional. These, along with demonetization, were supposed to have taken India into the digital age. However,  I have heard literally nothing besides sycophantic presentations with marketing bluster. Another example of short-sighted planning is the Mumbai-Ahmedabad bullet train. This was financed with a 12 billion dollar loan from Japan. The amount of this loan could have probably upgraded the deplorable infrastructure on the Indian Railways , but this is a long-term measure, so the political capital is negligible whether it be from the BJP or the Congress. Lagging infrastructure, especially in the eastern and the north-eastern states, is a significant reason India is held back and has a questionable international image. It’s gotten to a point where even a cost-effective Mars launch is seen as a wasteful extravagance. This is only going to be exacerbated in the future as the west hangs on to their technological advantages while China moves into the space age.

Now, we move on to society, but I’m not going to dwell on the hackneyed Hindu-nationalist narrative. There has been a recent hullabaloo over the scrapping of Section 377 of the Indian Penal Code. This decriminalizes homosexual activities, among other things.The current government is for scrapping 377, but is not willing to extend rights for the LGBTQIA+. This is somewhat understandable.  India currently is a very conservative society which makes it difficult for the BJP to do so without alienating its base. But the government could at least show some solidarity by protecting these people by giving them their basic human rights. Surprisingly, the Congress, the mainstream centre-left party, is silent on the issue. This government is also supportive of the Women’s Reservation Bill in Parliament. And while politicians trade barbs on the Parliament floor as to who’s really for women, the country becomes more and more unsafe for them. And again, the Congress is silent, as it was in the much-publicized Nirbhaya rape case in 2012.

The BJP  “ aims to transform and empower the weakest and the most neglected sections of Indian society, without any biases for caste, creed or religion.” It then proceeded to install controversial temple priest Yogi Adityanath as Chief Minister of Uttar Pradesh,  India’s largest state. If you’re confused: One of his first moves as CM was to employ anti- Romeo-squads which go around the state harassing young couples in the name of women’s safety.  The only transformation it has done for minorities is to make them cower in fear as cow-protection squads exact vigilante justice on poor cattle herders for desecrating the holy cow. Indian society is being polarized bit by bit. Whether it is the meteoric rise of online trolling, or the lynchings via WhatsApp, something is seriously going wrong.

A common denominator from all three areas is that policy-making is haphazard, slipshod, and unbelievably short-sighted and hypocritical.  But then, why do Indians elect such substandard policymakers? The consequences of such policies are due to another area of half-baked policy-making, education. The access has actually dramatically improved, but there is no effort in maintaining and improving a high level of education so that future students help Indian society progress. This can be blamed on both the federal and state governments. The federal government keeps on unnecessarily meddling with the tertiary sector. A prime example of this is the Institutes of Eminence scheme, where ten public and ten private schools would be given additional funds to boost their world rankings .Notwithstanding the flawed logic of using rankings, the  implementation was an absolute farce. There are also far too few seats at the elite public schools such as the infamous IIT’s. This can be attributed to ossified bureaucratic structures such as the University Grants Commission, which is going to evolve into the much more autocratic Higher Education Commission of India. Governments need to trust universities to function in order for them to climb up world rankings.

And it’s not just universities. Government primary schools are atrocious. The few gains that one sees are from private schools, since the curricula is actually quite decent albeit flawed.Half the Fifth graders read at the second-grade level. Facilities are minimal, there are schools without water, and far too many stories about cockroaches in midday meal centers. The long term consequences are disastrous: the poor stay poor as there is lower potential for social mobility and good students are forced to study abroad for university (if they can afford it) since there’s not enough seats in India or else settle for questionable private colleges. Labour productivity decreases since curricula are out of date and thus society is less productive as a whole when combined with current anti-intellectual sentiment. As such the current state of education policy means that we will only see more of this pathetic governance moving on.

India’s future is worrying, and its not due to the typical reasons seen in the media. India has made its’ bed for the future, and it isn’t a comfortable one – it’s probably broken. Extreme short-sightedness and desire for immediate gains in economics, infrastructure and societal policies have bought us to this point. All of this is underpinned by a creaking educational system which if not rapidly brought to standard, will only exacerbate the problems India is facing now.