What Happened Then and What It Means Now: An Evening with Hillary Clinton 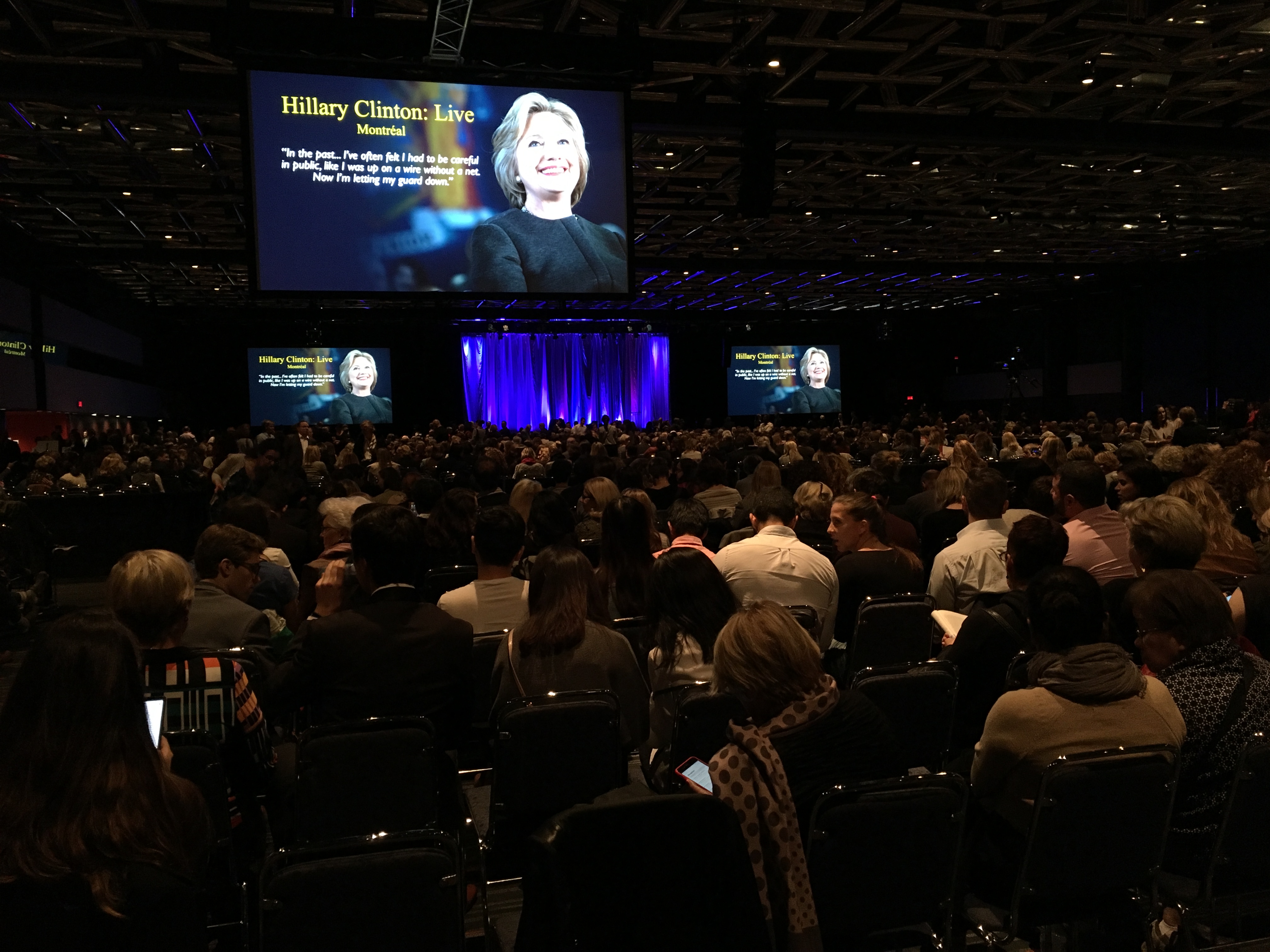 The crowd was buzzing with anticipation after comedian Andre Philippe Gagnon had finished his act. People were craning their necks to keep the stage in view, and the murmurs grew louder with each passing moment. Then, New York Times bestselling author Louise Penny appeared on stage to introduce the woman that everyone could not wait to meet. With the cameras rolling, Penny briefly discussed Clinton’s book, but then chose to focus on the kind of woman that Hillary Clinton is. She began by giving an overview of Clinton’s impressive career path, starting from her time as a student activist, moving to her time as a young lawyer in Arkansas, First Lady, Senator, Secretary of State, and ending with the first woman to lead a major-party ticket. Throughout this time Penny noted, “She rarely followed, and constantly led” and was careful not to leave out another accomplishment: winning the popular vote by millions of votes. Penny finished by talking about how the hilarious, thoughtful, yet serious Hillary she knows is someone that Fox News would love to meet.

As the crowd could wait no longer, a video montage of Clinton’s career started playing, elevating the energy in the room, culminating in Clinton herself appearing on stage and the crowd erupting in jubilation. Despite having her foot in a boot after recently fracturing it, she moved across the stage to her seat with a wide grin. She began with how grateful she was to be back in Canada, and how lucky the country was to have the charismatic and passionate leader that it does. After acknowledging the countless offers of residence she had been offered, she was ready to tell us what happened, but she would also reveal far more than that.

In the immediate aftermath of what Clinton referred to as the wildest election in United States History, she admitted she felt the pains of defeat. Standing on the stage in Philadelphia, giving a concession speech she never expected to write, was a moment of sobering reality that still stays with her. However, she moved forward, or rather upward, from that point, and the writing of her new book was the beginning of that process. She did not sit passively in the face of defeat, and instead chose to channel that frustration into a productive force, providing her not only with an opportunity for reflection, but also catharsis and healing. As a person, she had recovered – but as an American she was more concerned than ever, necessitating action. She also knew that her approach in speaking out had to be different than the one she had utilized during the election. “In the past…I’ve often felt I had to be careful in public. Like I was up on a wire without a net. Now I’m letting my guard down,” and let her guard down she did. More than what happened, she was focused on explaining the significance of the past in regard to the present and future.

The first lesson she learned was that everyone gets knocked down, but you have to get back up. This may seem like an obvious revelation, but it can be easily forgotten. After the election, she focused on her family, and simple leisures including the occasional glass of chardonnay, to deal with the aftermath. Beyond that, she started the movement “Onward Together” as an initial way of channeling what happened into what could be.

The second lesson she learned was that the only way to get sexism out of politics is to get women into politics. For men, likability and professional success go hand-in-hand, but the same is not true for women. She found that she was more well-liked when she was in a supporting role. It was when she aspired to lead that she faced the harshest criticism. Clearly, more than the formal structure of politics, the dynamics underlying it need to change. Cheers were evoked from the crowd as she praised Prime Minister Trudeau’s prerogative at forming a gender-balanced cabinet in 2015.

The third lesson, she revealed after a pause and a grin, was that there is no such thing as an alternate fact. In relation to something like the size of the crowd at an inauguration, she said that the fabrication of fact and altering of reality was unacceptable and foolish, but even more dangerous for the implications that has for an issue like climate change. In the latter case, the creation of alternative facts is not just ridiculous, but “insidious and subversive to democracy.” Truth lies at the foundation of democracy, and without it, everything falls apart.

The final, and most important, lesson she learned was from viewing the world now through the lens of what happened:  the forces at work in 2016 are still with us. In addition to alternative facts, Russian interference is also a danger to Western democracy. It is a danger that is actually propelled by the presence of ideas like alternative facts. She discussed the means by which this interference occurred, desperately trying to convey the scope and magnitude of this threat then and now. Agents used the Internet in order to place targeted attack ads to “fan the flames of division” within American society, even going as far as to pretend to be activists for various social causes, such as LGBT rights, for the sole purpose of undermining them through their interactions with others. This problem was not limited to Clinton’s 2016 campaign as is evidenced by the same individuals, working to undermine the same aspects of Western democracy, launching a cyber attack on French President Emmanuel Macron during his own election period.

In her eyes, a new Cold War with new weapons is just getting started, and this poses a significant threat to the liberal democratic world order. Her claim is by no means unfounded. As mentioned, both the United States and France, bastions of those liberal democratic values, have been attacked by adversarial forces with an illiberal agenda. Those forces that she warned of are being given the perfect opportunity to strike with the combination of the growth of far-right populist movements across the globe, and the ever-present Internet allowing those forces to insert themselves into those polarized situations to breed further hatred and discontent. Technology provides those destructive agents with access to the heart of any conflict, at any time, ensuring perpetual chaos. Democracy may be able to survive with even just a thin layer of consensus, but this situation threatens to undo even that.

There is clearly a crisis-level situation at hand, but that begs the question of why there has been such a reluctance to acknowledge it, let alone begin to deal with it. Clinton gives great insight into a possible answer, and that is that perception has been altered in a very dangerous way by the technological environment of the day. She illustrated this through how inconsequential emails had become weaponized during her campaign. When Clinton’s emails were leaked, there was sensitive information that was disseminated, but that is not the occurrence that concerned her. It was what the Russian media was able to do with insignificant information that raised alarm, and inspired her to start speaking out.

An e-mail from John Podesta about wanting to meet with the owner of a popular pizza place in Washington D.C. had been taken by the Russian media who then claimed that “pizza” was code for a child trafficking ring that Clinton and Podesta were running in the basement of that pizza place. The crowd laughed at first, but her expression remained stoic, as she told us that our reaction was part of the problem in beginning to deal with the current crisis of interference. That is because although it was clear to us that such a claim was a blatant falsehood, the same had not been true of others. A man in North Carolina had seen this story on Facebook, gathered together a collection of assault rifles, driven up to D.C, stormed into the pizza place, and demanded that the children be freed from the basement. There were no children or even basement to speak of. Every aspect of the story had been a lie, yet it was taken in its entirety as truth. Thankfully, nobody was hurt but there easily could have been a tragedy all from the presentation of a twisted fantasy as an insidious truth to one individual vulnerable enough to believe it. The spread of this fabricated story was not limited to action by the Russian media, but also involved individuals within the United States as well, including the son of Donald Trump’s National Security adviser at the time, Michael G. Flynn. Externally imposed disinformation is dangerous, but what this event shows is that the additional confirmation and utilization of it internally provides it with a downright devastating form of legitimacy.

The release of Trump’s Access Hollywood tape at the same time, where he made vulgar comments about what he believed men in power could do to women, had been unaltered and plainly presented, yet her emails were the focus. This stemmed from, as she aptly points out, the idea that if something is secret it is ‘more true’. This reveals that beyond the deliberate manipulation of information there is an error in how people have been conditioned to receive and process information, which is a far more difficult problem to fix. In a world where staged, scripted, and heavily edited dramas are called “reality television” this is the inevitable and unfortunate outcome. The line between truth and fantasy has become blurred, shattering notions of reality and allowing external forces to impose falsehoods dictating what, and in what way, people think. Clinton emphasized that Trump was the reality television candidate, while she was the candidate of reality, giving him an advantage as he is accustomed to operating in this contradictory framework.

We are left in a world where truth is a game, and success is a result of how well you play it. As Clinton mentioned, she was winning the election until October 28th, 2016 when the FBI made an unprecedented intervention into the election, choosing to re-open the investigation into her emails. There was no mention of the open investigation into Trump’s own campaign in regard to foreign collusion, and as a result, Clinton fell victim to the selective presentation of information, while Trump thrived. Democracy is dependent upon free and fair elections; however, the new forces at play have thrown off the balance, making elections today neither free nor fair. The threat to democracy is ubiquitous, but hope does remain. Clinton finds great solace in the “wave of activism” that she sees promoting timeless democratic principles and values in the face of racism, sexism, misogyny, and injustice. Partaking in those negative behaviors is unacceptable, but complacency is also unforgivable. It is necessary for people to take cybersecurity seriously, in addition to continuing to hold the media and public officials to high standards of truth and accuracy. There may not yet be a way to remedy the issues facing our reality, but action and awareness will prevent them from being the only reality we face.