Here’s To New Friendships: US-Cuba Relations and Their Economic and Human Rights Implications 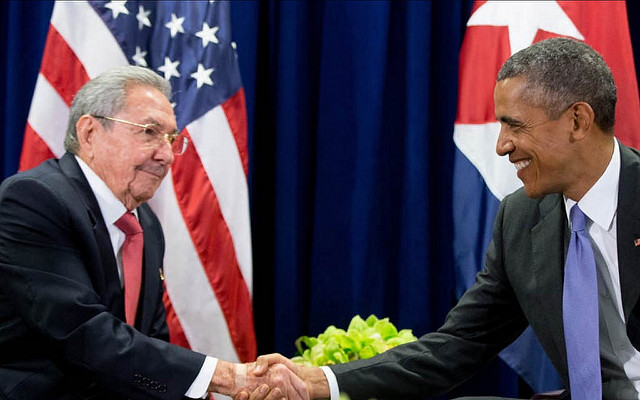 Barack Obama’s speech in Havana, on the 21st of March, was addressed to an engaged crowd of Cuban citizens eager to learn about a new era of American-Cuban reconciliation and prosperity. Calls for the strengthening of economic ties and a direct condemnation of human rights violations particularly resonated with the crowds in the US and Cuba. If all goes well, American and Cuban foreign policies will show gradual liberalisation from ones largely shaped by the Cold War and its prominent legacy.

The most significant reform proposed is the embargo lift. Following the Cuban Missile Crisis of 1962, the US adopted a policy of economic isolation in the hopes that Cuba would be forced to democratise. The subsequent Helms-Burton Act in 1996 not only restricted trade further, but also consolidated sour diplomatic relations between Cuba and the US. Whilst the embargo has hindered economic growth in Cuba by an estimated $116.8 billion, it has also shaped Latin American perception of the US. Leaders in countries such as Peru and Chile engage in protectionism to counterbalance American trade policies they view as imperialistic.

Other crucial reforms include relaxation of tourism and travel restrictions. Tourism promises to be a thriving sector, with its revolutionary culture and Cold War history still very much alive in the streets of Cuba, not to mention the beautiful Caribbean landscapes. The combined effect of reopened embassies in 2015 and eradicated bureaucracy in 2012 under Raul Castro’s reforms, have allowed for Cuban-American families to reconnect and small businesses to profit. Moreover, interest groups are avid supporters of increased economic and social integration, as human rights violations due to political dissidence in Cuba would get more media coverage, thereby hopefully resulting in a decrease of such abuses.

The positive effects of economic liberalisation appear to be two-fold as both Cuba and the US would seemingly benefit. By lifting the embargo, the US would gain access to more markets for its exports. Their exports to Latin America, such as refined petroleum and automobiles, might further increase. Furthermore, investment opportunities would be abundant. Various companies such as Starwood Hotels, Western Union and Airbnb have made announcements of opening branches or beginning operations in Cuba.

However, all these investments rely on the US Congress to pass the embargo lift bill, which is proving difficult. Obama also stated that separate bills that call for the removal of corporate restrictions in Cuba might not be passed during his term. The turnover of presidency might reduce chances of American-Cuban economic reconciliation. The Republican candidates of the US election have expressed their intention of reversing openness or at least maintaining skeptical foreign policy towards Cuba. Another obstacle to economic integration is the Cuban government’s fear of its economy losing sovereignty due to the massive influx of US investment. Raul Castro’s intends to continue the socialist regime but allow aspects of the free market economy. Ongoing and indecisive talks with Google indicate this cautionary stance on the open door policy especially since such changes would require Cuba to industrialise to a certain degree.

Industrialisation has mixed implications on the Cuban economy and society, in particular highlighting competition and environmental concerns. Industrialisation increases employment prospects and allows for a larger incomes. However, Cuba is an agrarian economy that has been using sustainable farming methods since the 1990s, after the Soviet Union collapsed and most machinery and pesticides were no longer exported to Cuba. In a society that already faces food shortages and rationing, an increased demand for food by tourists and a larger workforce, further shortages might occur. Whilst food importation is an alternative, it would outcompete local farmer collective products unless they adopted the more efficient technologies that are harmful to the environment. On a positive note, the environmental concerns seem to have been identified and addressed as the Agriculture Committee authorities from the US and Cuba have agreed to collaborate on Cuba’s organic produce industry using sustainable methods. Moreover, economists have argued that the thaw in relations is necessary to maintain a certain standard of living in Cuba. The commodity slump has hurt global demand for Cuban exports like raw sugar and tobacco; today, the export revenue is not enough to sustain Cuban development – something has got to give.

Other than benefitting regional powers, various human rights groups have also welcomed the normalisation of ties between the US and Cuba. Povertytends to harbour more political dissidence, which in Cuba has provoked government human rights abuses in response. Recent years have seen almost double the number of incidents of arbitrary detentions, employment cuts and public beatings due to protests against the government. Organisations like The Cuban Commission for Human Rights and National Reconciliation (CCHRNR) that address these violations are deemed illegal by the Cuban government. One of the Obama’s proposals was economic aid in return for the release of 53 political prisoners and regular international human rights watch check ups. In his speech, Obama also spoke about censorship in the country, and encouraged freedom to information and of expression. Whilst majority of Cubans hearing the speech welcomed the media attention about human rights violations, there were some locals who disliked Obama’s speech because the violations were only acknowledged as a contingent to economic development. Amnesty argues that it will take a lot more than economic cooperation to improve human rights in Cuba. Measures to alter the judicial and administrative system in Cuba must be taken for human rights practices to really improve.

The US is not the only power to propose such deals to Cuba. In 1996, the European Union (EU) also promised full economic cooperation and diplomatic ties if Cuba transitioned into a democracy and ceased human rights violations. Currently, countries within the EU remain the largest importers of Cuban products despite the socialist regime. The existence of EU-Cuban trade relations, while bolstering validation for similar US-Cuban exchanges, do shed doubt on the effectiveness which economic partnerships can exert on improvement of the island’s human rights record.

Studies in 2014 have indicated that about 73% of the American population, and most Cuban locals also support normalising ties, or at least lifting the embargo. The generations that were born after the Cuban revolution are especially enthused by liberalisation, especially since Raul Castro’s limited liberal market and government reforms proved successful. By decentralising the agricultural sector and creating frameworks conducive to the burgeoning private sector, the amount and variety of consumer goods increased between 2010 and 2013. Access to better and quality healthcare and education has also been reported.

Although transitioning to a mixed market signals a radical shift for Cuban society, the question of its political democratisation still remains clouded. According to modernisation theory of democratisation, as a society gets wealthier due to economic liberalism, people turn to democracy as they have the resources to accommodate such political processes. However, mixed economies with strong central governments can prove to be efficient and successful, as is the case in China. Also, seeing as Cuba has historically had an antagonistic perception of American democracy, they are unlikely see the merit in adopting western liberal democracy. Therefore, regardless of the US’s attempts to “promote non violent democratic change” through NGOs, Cuba’s prospects of democratisation, if any, will be extremely gradual and at the discretion of the people and the government.