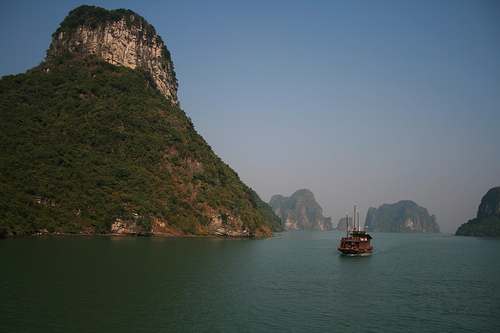 Since the end of the Cold War, most people assume that, with exception of North Korea, the ex-Communist world has done just fine. The wave of economic liberalism that swept most of the remaining Communist states in the late stages of the Cold War gave many people hope that the West and democratic capitalism could be universalized. In 1992, Francis Fukayama famously declared that this was, in fact, “the end of history.”

Typical to this wave was the introduction of market-based reforms in the 1990s in Vietnam. Much public attention has henceforth been given to Vietnamese contract law and export tariffs, amongst other issues, as the state and Party liberalize the economy but retain a tight grip on power. Yet, a question remains unanswered: what of the Vietnamese themselves? How do they stand on the economic and political institutions that regulate their day-to-day lives? This article aims to provide a general, if shallow, account of the popular feelings towards the Vietnamese state today.

While in Vietnam, I had the chance to ask a few people coming from different backgrounds concerning their take on their country’s current situation. I asked my first interviewee, a 43 year old woman with a Degree in French from Saigon what she thought was the linchpin of the Vietnamese state apparatus. Ms Tan answered me with this:

“When you have something, the state demands it from you. When you’re missing something, you better not demand it from the state.”

She was not the only one to feel this way. Whether we talk about political or economic power, many Vietnamese feel that the state caters to the whims and desires of the administrative elite of bureaucrats and politicians. For example, it is well understood that the opening of a Hermès store in the center of Ho Chi Minh City was sponsored by oligarchs who wanted to offer beautiful carrés to their mistresses. Everybody shakes at their heads at the knowledge that their taxes and other contributions to the state line the pockets of the top dogs of the regime.

The already thin legitimacy granted to state institutions falters under the irony of political representative mechanisms. As Mr. Hao, another middle-aged interviewee from Danang who works in the tourism industry, explained to me, the state-controlled media constantly lies. Everyone is aware of it. For example, during the most recent provincial elections, local TV reported a 100% participation rate. Yet, Mr. Hao and his neighbors, who didn’t send their election ballots back, know for a fact that it is not true. So one must ask: how are people expected to retain any hope and confidence in a government that doesn’t even bother to lie in a convincing manner? Ambivalent or even hostile feelings towards the bureaucracy get entrenched as the country continues economic liberalization. Indeed, the argument that FDI ultimately betters the human condition through the modernization it fuels is strongly countered by the expansion of sweat shops and a real minimum wage consistently estimated at $230 per month, barely enough to purchase basic necessities.

Not only does this make the Vietnamese people unwilling to trust their government, they also lose hope in the potential of their country to be a player on the world stage. An example is the geographical situation of Vietnam: at the bottom edge of the South East Asian peninsula, which grants them the delta of the Mekong River. Typically, the dams that Thailand, Laos and Cambodia have earlier up on the river cancel most of the advantages of owning the delta territory. Indeed, the Vietnamese have to contend with large floods during the monsoon and intense drought in the dry season: the socialist republic is at the end of the line, getting whatever drips of water are left. This is just one of the reasons why the Vietnamese people have lost confidence in their government to make Vietnam a respected world power once again. Generally, this overall disillusion with the Vietnamese state causes the Vietnamese people to hang on to past history and traditions, rather than look forward to modernity, which, even under the banner of communism, seems to benefit the elite at the expense of the rest.

Yet hanging on to the past is not a satisfactory option anymore. In fact, it is rather discomfiting, due the weak identity that the Vietnamese people feel they can cling on to. Indeed, after ten centuries of Chinese domination and internal division came a century of French colonial rule. After the Second World War came a series of conflicts with outside power and finally harsh Communist rule. Quadrilingual families reflect this complicated history. While all speak Vietnamese, grand parents also speak French, parents can converse in Russian and the children struggle to learn English. This is one of the main challenges of political science today: theories focus on institutions as well as the gaps and bridges between minorities but not many try to account for a national population which lacks the means to put a united, if weak, identity forward through political channels.

In terms of the major theoretical paradigms of international relations, this account of Vietnam provides a bleak vision for the country’s future. All things taken into consideration here would be ignored under a realist framework, which sees the state as a unitary actor and hence does not give a second thought to the dreams and aspirations of the population nor their sense of unity. A liberal would wistfully congratulate Vietnam on its economic liberalization and patiently wait for the country’s decaying institutions to reform and lower transaction costs. Finally, a constructivist might appreciate the challenges posed to the socialization of desirable norms but would blame it on the unreachability of advocacy mechanisms rather than look at the root problem of a downplayed identity.

So where does this leave the Vietnamese population today? The point this article aims to make is not that communism or socialism is undesirable in and of itself. That remains to be argued. Rather, the question asked here is whether such type of government is acceptable for the Vietnamese people today. When I posed this to my second interviewee, he answered with a resounding no. Mr. Vun, retired, lived in Berlin for four years in the late 1990s, after getting his degree in History in Hanoi, and today makes a point of calling Ho Chi Minh Ville “Saigon”. He says he is from “the scarred generation” and recalls having to dig trenches to go school in the 1970s. As he puts it:

“Were political competition to be allowed and new parties to be created, we all know the Communist Party would never get elected again. At least not while I or my children live.”

My question: what would you propose the people do?