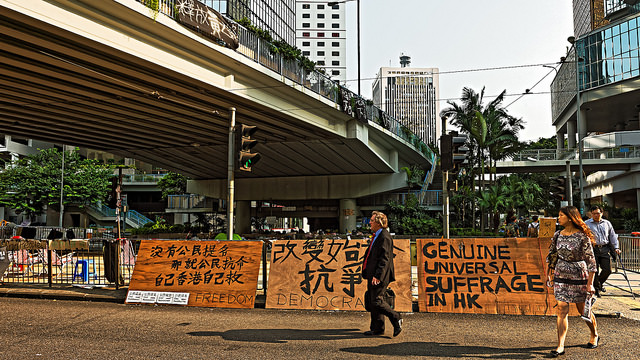 Hong Kong’s chief executive elections, one of the city’s most anticipated political events, are scheduled to take place shortly on March 26 2017. Recently, several influential figures have been vying to secure nominations in order to formally qualify as candidates in the race for the government’s top position.

As of the nomination deadline on March 1 2017, three candidates have been qualified to run, namely, former Financial Secretary John Tsang Chun-wah, ex-Chief Secretary Carrie Lam Cheng Yuet-ngor and retired judge Woo Kwok Hing. This three-way fight pits Beijing’s preferred candidate, Lam, against the remaining two popular figures who are highly advocated by pan-democracy supporters. Whilst the final election has yet to take place, concerns from citizens surround the contentious trade-off between demands from Beijing on the city’s sovereignty and growing calls for universal suffrage.

Hong Kong currently maintains a precarious political balance with Beijing. Since the British rule ceded Hong Kong as a colony almost two decades ago, the city was granted autonomy under a “one country two systems” principle. In practice, Hong Kong would be entitled to “a high degree of autonomy, except in foreign and defence affairs” for the following 50 years. Additionally, the city is permitted to have its own legal system, and to enjoy many rights that are denied in mainland China such as free speech and freedom of association.

Despite such privileges, Hong Kong’s electoral process has received longstanding backlash due to its undemocratic nature in which the chief executive is ultimately chosen by a 1,200-member election committee. Out of a total population of around 7 million, only 240,000 voters have had a direct say in the membership of the election committee. The candidates for chief executive must then gain a minimum of 150 nominations from committee members to be secured. Although debates between candidates are broadcasted on live television for the public, the victor is chosen after winning 601 votes on a secret ballot casted only by the election committee. Even more concerning is the fact that the Beijing government has the final say in officially appointing and approving the elected chief executive.

As such, Beijing’s ability to exert its dominance in Hong Kong’s political sphere has held prominence in the makeup of the election committee. Members of the 1,200-constituent group have been criticised for over-representing pro-establishment sectors close to Beijing and thus creating hurdles in the fight for universal suffrage.

More importantly, increasing political discontent stemming from the unpopularity of incumbent CY Leung’s administration and the lack of an electoral reform culminated into the watershed Occupy Central mass protest in 2014, alternatively known as the Umbrella Revolution. Spearheaded by pan-democrats, the civil disobedience movement drew over 100,000 protestors who held sit-ins that blockaded major highways and streets. Despite persistent but futile negotiations, the Beijing government ruled that in lieu of fair and open elections to the public, the next chief executive would be elected by the same pro-Beijing election committee in 2017. In December 2016, pan-democrats made considerable breakthrough and successfully seized 326 seats in the election committee; but have not managed to overturn the some 800 pro-Beijing electors, who are seen as largely pivotal in determining the final result.

As the election date approaches, tensions have emerged between between Carrie Lam, a candidate favoured by Beijing, and John Tsang, the people’s preferred candidate. Whilst Lam proposed improvements to Hong Kong’s education and housing status and showed some indication of offering citizens broader participation in her new administration if elected, she failed to promise constitutional reform due to her political ties with the Beijing government.

China’s influence has deepened with increasing pressure on the election committee to be partial earlier in the electoral process. Experts, such as political intelligence firm Statfor, have noted that “Beijing has been quick to throw its weight behind Lam as the popularity of the region’s pro-democracy candidates has grown,” leading to concerns over Lam’s sweeping majority of 579 nominations from pro-Beijing officials in contrast to Tsang’s 165 and Woo’s 180. Despite failing to receive nominations from the 326-pan democracy constituents, Lam inherently enjoys solid backing from predominant pro-establishment forces who will ultimately choose the chief executive irrespective of mass appeal.

Conversely, candidate John Tsang holds significant leverage in terms of popularity, with recent polls indicating an advantage of 14 percent more in public support compared to his opponents. The same polls however, have also expressed that Hong Kong citizens expect Lam to win because she has Beijing’s approval. In doing so, Tsang finds himself in the hot seat with the challenge of achieving two contradictory goals in order to bypass the pro-Beijing controlled committee that is inclined to favour Lam. For one, Tsang has to continually earn the endorsement of the pan-democrat camp, something he has markedly attained due to his widespread popularity. Tsang faces larger issues however, in the need to gain the trust of Beijing who is “understandably suspicious” of a candidate who once served as a private secretary to the last colonial governor Chris Patten.

It is without question that Lam’s overbearing rule augmented by Beijing will receive criticism, as the concerns ensuing from the unprecedented Occupy Central movement have demonstrated that the unwavering and unequivocal demand for change is far from silent. As the fear of Beijing’s looming shadow over Hong Kong’s legal affairs and freedom of speech remains prevalent, the newly elected leader will ultimately need to restore faith in the “one country, two systems” model, which promises extensive autonomy and freedoms. Whether this is feasible is open to interpretation, but Beijing’s tightening grip on Hong Kong’s autonomy signal dim prospects for the city’s self-rule.