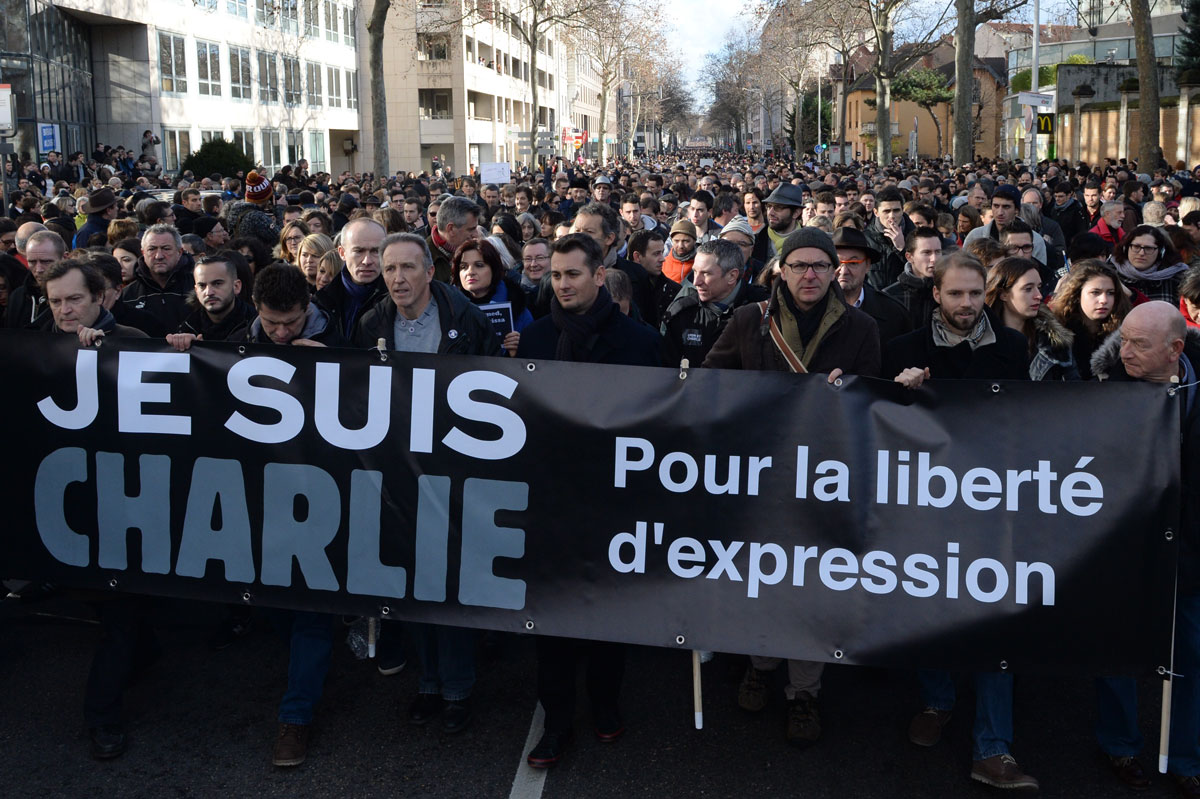 330,000 people mobilize in Lyon in solidarity with the murdered cartoonists https://goo.gl/zi1Lq3
Share

Zineb El Rhazoui is a Muslim Moroccan-born French journalist and sociologist of religion. As a columnist for Charlie Hebdo, she escaped death when she happened to be in Morocco during the attack in January of last year. El Rhazoui remains undeterred by death threats and fatwas as a strident human rights activist and critic of Islam. Guarded by a 24-hour security detail, she likens her circumstance to ‘life in a moving prison.’ El Rhazoui is condemned to live the rest of her life under credible threat of death, hunted by theocrats eager to exact scriptural justice.

El Rhazoui has taken to the battleground of ideas with her new book Detruire Le Fascisme Islamique (Destroy Islamic Fascism). Her second book since the Charlie Hebdo Attack, she dedicates it to one of the most persecuted and important communities in the world – of which she is a part – Muslim “atheists” and secularists. The book “is an unapologetic strike against the strict application of Islam,” she says, of the sort propounded by Islamist extremists. She goes on to say that the “codes of behaviour” modelled by present day Salafists “have no place in the modern world.” Moreover, one thing she strives to make clear is that the murderous lunacy which inspired the killing of her colleagues is distinctly religious. A vacuous, fundamentalist understanding of the faith yields a violent intolerance toward free expression that has played itself out on the streets of Paris, Copenhagen, and Amsterdam.

In spite of this reality, apologists for Islamism like religious scholar Reza Aslan have explained such incidents as being the result of ‘multicultural tensions,’ in a turbulent European “identity crisis.” The rest of his repertoire works to exonerate religious belief as having any causal role in motivating behaviour. What is remarkable here is an unwillingness to acknowledge the shades of an intolerable totalitarianism. The mode of thought Aslan propounds – which has so greatly influenced secular discourse on religion – renders us incapable of discerning a set of ideas which are uniquely problematic, and perfectly antithetical to the essence of pluralistic, liberal societies.

It is as though the inquisitors of 14th century Europe have returned under the guise of another Abrahamic dogma, and given the current state of our public understanding, we are ill-suited to respond adequately. Freedom of speech is an indispensable liberty that Western societies must unequivocally defend, even in the wake of extreme offence taking to satirical cartoons. No religion’s blasphemy laws should demand adherence in secular countries. Lest we become distracted by cries of “racism” directed at publications such as Charlie Hebdo, we would do well to note that the magazine is actually an anti-racist, anti-xenophobia, far left magazine that is best known for its lampooning of the Catholic Church and ridicule of Europe’s far right. A look at the context surrounding the inflammatory prophet cartoons does wonders to clear up the misconceptions thrown up by Leftists. The confusion expressed by prominent progressive journalist Glenn Greenwald serves as a case in point. His attempt to demonstrate the hypocrisy and anti-Muslim bias of Westerners fails with his false equivocation of bigotry against a group of people with the mocking of a set of ideas and their author.

Of course, it is by no means a majority of Muslims who would defend attacks like the ones on Charlie Hebdo. Nor are the majority of Muslims worldwide enthralled to such an Islamist dogma. Although, poll results results on the issue are disheartening. The fact that over a quarter of British Muslims “have some sympathy for the motives behind the attacks” should provoke concern within Muslim communities. An older poll from the Danish cartoon controversy showed that 68 percent “support the arrest and prosecution of those British people who insult Islam.” These figures represents a snapshot of a much larger war of ideas taking place across dozens of societies, where fundamentalism and orthodoxy are pitted against a modern, secular and liberal understanding of the faith. However, given the state of our discourse, we are ill-suited to empower any reform.

The response to Islamism in the West has been far from encouraging. First, the pressure on the media to self-censor has effectively curtailed the right of free people to satirize one of the world’s major religions. Moreover, the modern left – progeny of the anti-racist liberals of past – have abandoned liberalism in the name of a misconceived defence of multiculturalism. A group that Muslim reformer Maajid Nawaz has called the “fellow travelers” of Islamism, have systemically failed to defend liberal values and liberal Muslims for the sake of moral relativism and “cultural authenticity.” A sample of this intellectual and moral fraudulence can be seen in their use of the empty term “Islamophobia.” Despite common misconceptions, this term does not describe the genuine problem of anti-Muslim bigotry in the West. Instead, its use represents a “semantic confusion.” It is a systematic conflation of racism and bigotry against people with the criticism of a set of ideas. In practice, the charge of Islamophobia stops desperately needed conversation about the issue of Islamism dead in its tracks, while providing cover and legitimacy to this ideology. In its slightly less absurd alternate meaning, “Islamophobia” tries to suggest some form of prejudice or irrationality behind reasoned criticism of religious dogma. In reality, we must be able to separate the people from their faith, even when they view themselves are inseparable from it. Ultimately, between the demagoguery of right-wing bigots and the shameless obscurantism from left-wing media sites such as the Huffington Post, AJ+, and Salon, it seems scarcely possible that we will develop sensible views and policies on this issue.

Finally, the “clandestine existence” of Zineb El Rhazoui is representative of a stark reality that is visited upon ex-Muslims and freethinkers all over the world. Public intellectuals such as Ayan Hirsi Ali, an Islamic reformer, face a analogous security risk. This ambience of repression has also undoubtedly kept freethinkers across the Muslim world closeted, afraid to express themselves intellectually and politically, for fear that they will be put to death for the imagined crimes of blasphemy and apostasy. Where these embattled voices are brave enough to surface, El Rhazoui maintains that her primary ambition is to defend them, and all other Muslims as well. She says, “salvation will come when we stop aligning the identity of an entire community with the most fundamentalist people who pretend to represent it…We have to extend a hand to all these Muslims who are free people, who have questioned their heritage, and who are fighters for liberty, battling for the same values as us but in a context controlled by Islamists.” In reference to Muslim culture, she remarks, “I can show them how to discover its richness and the diversity of their culture. I believe this culture deserves universality because you can be Arab, Muslim and a free thinker.”

In her discussion with Women in the World, El Rhazoui ended by saying, “today I wander around in a moving jail — it’s a moving cage — but in reality I am more free in my head than those who threaten me. Because their cage is inside their head… even if they have freedom of movement it is their spirit and their reason and intelligence that is imprisoned. I am much freer than them.”