House of Cards: A Reckoning for China’s Precariously-Built Housing Market 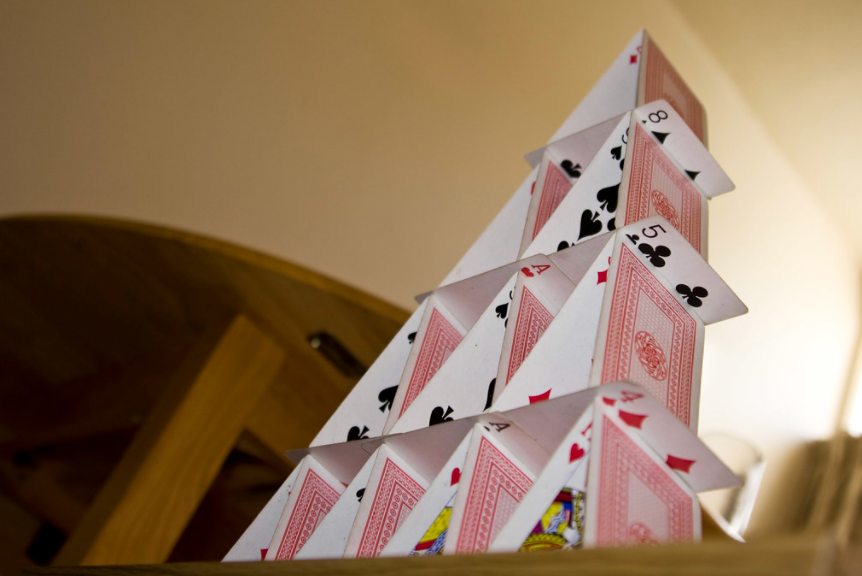 Real estate investment represents a large portion of the average Chinese citizen’s investment portfolio. Socially, it is deemed necessary for men who wish to marry to own an apartment, with around 70 per cent of single women saying that they would only marry a man who has the means to buy a home. Economically, it is the preferred investment path for two main reasons. As China began to open up in the 1990s, property prices steadily increased, and many Chinese investors became incredibly wealthy over a short period. Between 2000 and 2018, for instance, property prices quadrupled, leading many to view real estate as an essentially “risk-free,” high-return investment.

So, how does it all work? For starters, the entire system relies on companies taking out large sums of credit, with the total debt for some of China’s largest developers at this time being upwards of $5 trillion. Moreover, developers usually sell out apartment blocks before completion or before ground has even been broken due to immense demand. Once a project sells out, the prospect of a new set of clientele incentivizes firms to buy up more land and sell non-existent apartments. Combined with the large amount of debt taken on, this strategy leads many companies to file for bankruptcy before they can complete all, if any, of their housing projects. Unfinished apartments are most apparent in China’s ghost cities, with the number of such cities in China approximately 50. These units are usually all sold out and used as investment properties by buyers; renting out such properties is an uncommon occurrence. Over 65 million homes in China are currently sitting empty.

This sort of growth in a market is unsustainable. Not only are real estate development firms taking out loans to finance projects, but a large portion of homeowners are taking out lines of credit to partially or fully cover the cost of purchase. With a system that offers little accountability on the part of real estate developers (leading to scores of them filing for bankruptcy), many casual investors realize too late the danger of putting their life savings into a non-existent apartment unit.

With declining demand because of decreasing population growth, prices have begun to fall, and a sure-fire investment has turned into a dramatic loss for many. One such example is the case of Evergrande, whose real estate division is the second biggest and one of the most well-known in China. The company’s rapid growth has left it with approximately $300 billion of debt. Previously, companies such as Evergrande were able to skate by, simply paying interest on the amounts they owed. Still, Beijing has cracked down on regulations surrounding housing development, property taxes, and loans. Evergrande, and many others, scrambled to sell more apartment blocks in an attempt to pay off some of their debt, even going so far as to offer heavily discounted units. But new fears surrounding Evergrande’s potential bankruptcy have not encouraged the average buyer.

Many familiar with the Chinese economy argue that the housing market’s looming fate is similar to the recent Peer to Peer (shortened: P2P) loan schemes. P2P loans were virtual platforms encouraged by the CCP that connected lenders to borrowers, most of whom were average citizens. They gained popularity in the mid to late 2010s, but mismanagement and rampant fraud resulted in many losing their life savings. Some platforms even operated like giant Ponzi schemes. While the CCP instituted regulations to reign in mismanagement, it appeared to be too little too late for most participants. Protests erupted in major cities across China, expressing anger with the government’s inaction in preemptive regulation. Current protests outside the offices of companies such as Evergrande parallel those surrounding the failures of the P2P loan schemes. In both scenarios, those affected are angry at the government for failing to institute protective mechanisms earlier on.

So, what’s next? Evergrande and other companies like it are simply too big for the CCP to let fail. The government will have to bail them out when the time comes. Additionally, the CCP supports the free market as long as it doesn’t harm the social order, but Xi Jinping’s authoritarian government dislikes these newest mass protests, which are spreading quickly due to social media.

Logan Wright, director of China markets research at Rhodium Group, worries about the 6.4 trillion dollars of debt taken on by Chinese households, “just since 2015, according to China’s central bank, comparable to the increase in debt in the United States from 2003 to 2008.” Anne Stevenson Yang, a J Capital Researcher and China specialist, believes that a company as large as Evergrande potentially going under means that the CCP will want to reign in excess moving forward. She says that the CCP “[feels] capitalism had its purpose, and now [they] need to fold up and move toward actual communism.” But, will this intervention be too little too late? While the bursting of the Chinese housing bubble likely won’t trigger a crisis similar in scale to the American recession of 2008, no matter what new regulations the CCP introduced, it may be impossible to avoid a severe economic hit.

Featured image is “House of Cards” by peterjroberts. Licensed under CC BY 2.0