How COVID-19 Is Endangering Press Freedom Around The World 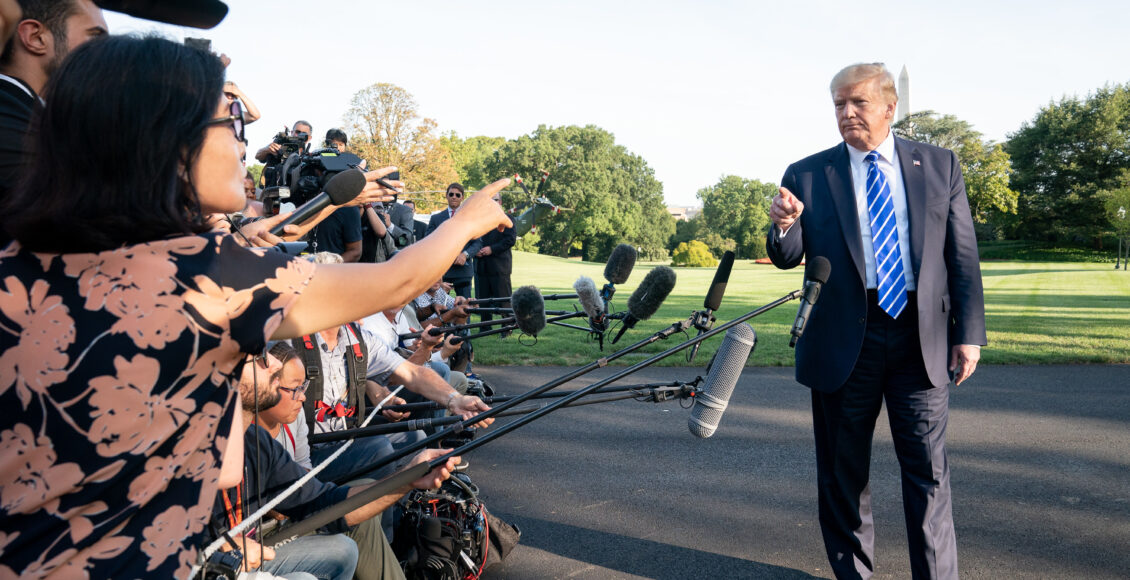 Donald Trump at a press conference in 2019. Photo by The White House. Licensed under Public Domain.
Share

May 3, 2020 marked the 28th edition of World Press Freedom Day (WPFD), an occasion for the United Nations Educational, Scientific and Cultural Organization (UNESCO) to launch a global campaign to raise awareness about the importance of protecting freedom of the press around the world. Held in the midst of the global COVID-19 outbreak, this year’s WPFD came at a crucial time, seeing as media outlets have played a central role in challenging government responses to the pandemic. The event was specifically relevant given that numerous governments around the world have taken advantage of the pandemic to increase their use of censorship and deliberate disinformation. Although particularly prevalent in authoritarian states — see Iran, Venezuela, or Turkey — these actions have also threatened a priori democratic countries. Two states in particular, Hungary and the United States, where increasing attacks on the press pose serious threats to the very pillars of democracy, bear witness to this phenomenon. Although their political systems greatly differ, both countries’ leaders seem to be heading down a dangerous path, capitalizing on the current state of affairs to undermine freedom of the press.

Uninterruptedly holding power since 2010, Viktor Orbán and his Fidesz party won landslide victories in the 2010, 2014 and 2018 elections, earning them a supermajority in the National Assembly of Hungary. In practice, this has allowed Orbán to concentrate and exercise power practically at will, and transform Hungary into an increasingly “illiberal democracy,” where the values of liberal democracy are not explicitly rejected but are far from being the central pillars of state policy. In the past, Orbán has not hesitated to show his appreciation for authoritarian states like China and Russia. This has translated into an increasing lack of government transparency — Hungary was ranked the worst EU member in terms of corruption for the first time in 2019 — and a growing control over national media portals. In the wake of the COVID-19 pandemic, Orbán has merely found a new opportunity to threaten press freedom in the country to an unprecedented extent.

On March 30, 2020, in order to ensure the possibility of rapid action in the fight against COVID-19, the National Assembly adopted a law allowing Orbán to rule by decree, meaning that any law he proposes is automatically approved by parliament. Perhaps more preoccupying is the lack of a time limit to this law, contrary to the situation in other states that have adopted similar emergency measures. Orbán’s spokesman, Zoltán Kovács, has justified this by explaining that “just as in wartime, a state of emergency could extend until the end of hostilities.” Orbán thus benefits from indefinite legislative power unless parliament decides to end the situation, which is unlikely to happen since his Fidesz-KDNP alliance holds  133 out of 199 seats in the National Assembly. This can have serious consequences on the press, as highlighted by Zselyke Csaky, the research director for Europe and Eurasia at Freedom House. In an interview with The New Yorker, he has expressed worry that Orbán, “while appearing to address a public-health crisis, will continue to wage war against independent media outlets and opposition parties covertly.”

Already before this crisis, Orbán exercised immense influence on national media. In March, a known government-linked businessman, Miklos Vaszily, bought the country’s largest independent news portal, index.hu, promptly raising eyebrows over Orbán’s control over the flow of public information. During the current pandemic, Hungary’s prime minister has increased restrictions on independent journalism. Officially intended to combat the spread of the virus, Orbán has introduced a law under which “the spread of distorted truths” would be punishable with prison time. Anyone who “publicizes a falsehood that obstructs or prevents successful protection” from the disease can face up to five years of prison. According to The Guardian, “journalists in the country say the new law is being used to deny them access to information, and on occasion to threaten them.” One Hungarian journalist noted that “people were scared of talking to journalists, because they were afraid of losing their jobs. Not just doctors and nurses, but school headteachers and parents as well.” The COVID-19 pandemic has thus proven to be particularly opportune for Orbán’s censorship ambitions.

The repercussions of these actions can be long-lasting. Since there is no time limit set on Orbán’s newly acquired power to legislate, prospects of renewed press freedom are slim. Even if Hungary reverses its censorship tendencies, independent newspapers will already have been financially weakened, and people will already have become accustomed to state-aligned media. The absence of freedom of the press, even if only for a limited period of time, proves dangerous for the longterm survival of independent media outlets.

These tendencies are by no means limited to Hungary. Similar to Orbán, US President Donald Trump has consistently antagonized the press throughout his mandate. Unlike Orbán, however, Trump has been widely criticized at home by independent media outlets. American journalists are protected  by shield laws unknown to the Hungarian press, but the pandemic seems to exercising pressure on those principles.

The United States and journalism in the Trump era

Since coming to power in 2017, Donald Trump has largely been perceived as hostile towards the press, as shown by Reporters Without Borders’ (RSF) 2019 annual report, claiming that “press freedom in the United States continued to suffer in President Donald Trump’s third year in office.” In addition to Trump’s usual verbal attacks on reporters at press conferences, a number of other actions have highlighted the centrality of press suppression within the President’s agenda.

In March 2019, a leaked document revealed that “the US government was using a secret database tracking journalists, activists and others who border authorities believed should be stopped for questioning when crossing certain checkpoints along the US-Mexico border.”  A few months later, the Justice Department indicted WikiLeaks co-founder Julian Assange on 17 counts of violating the Espionage Act, a law created more than a century ago, during WWI. “If he was convicted,” writes RSF, “this would set a dangerous precedent for journalists who publish classified US government information of public interest moving forward.”

The global COVID-19 outbreak — of which the United States is now the epicentre with over 100 thousand victims at time of publishing — has prompted Trump to increase his attacks on the press. On April 6, for example, when Fox News reporter Kristin Fisher asked about a time lag in hospitals receiving COVID-19 test results, he answered: “You should say, ‘Congratulations, great job!’ instead of being so horrid in the way you ask a question.” This event is especially significant given Trump’s usual sympathy for Fox News‘ conservative leanings.

Trump’s attitude towards the press is especially dangerous in the time of COVID-19. He has given inaccurate information concerning the government’s response to the pandemic and has spread false information regarding its treatment and prevention. Concerns about these claims have led some major networks, such as CNN and MSNBC, to refrain from airing President Trump’s briefings live or in full, due to concerns of accidentally spreading misinformation. According to Dokhi Fassihian, the Executive Director of Reporters Without Borders USA, “each of these incidents represents a sinister attempt to scapegoat the press with hateful rhetoric designed to distract, deflect, and dodge critically important questions about the administration’s response to COVID-19.”

Trump’s remarks also have long-term effects on the credibility of journalism across the country. He is part of a political class expressing strong discontents about the press, often depicting it as biased towards the political left or the Democratic Party. Now that he holds the office of the President, that sentiment may reach a much larger audience, as hostility towards the press becomes increasingly normalized. This would, in turn, compromise the legitimacy of the press in the future.

Furthermore, Trump’s attacks on the press often encourage journalists to bite back, wanting to portray Trump as the enemy. This trend has been observable since long before the pandemic, as a number of journalists have engaged in never-before-seen heated disputes with the President during press briefings. These disputes have two main consequences. First, by making the press engage in superficial debates with President Trump, they risk compromising the perceived impartiality of the press, ultimately hurting journalism as an institution. Second, these disputes simply distract the population from the truly pressing issues that ought to be debated in the midst of the COVID-19 outbreak.

In sum, the Trump era has seen constant attacks by the administration on members of the press, putting the United States on the 45th position in RSF’s World Press Freedom Index, well below countries in Western Europe. This trend does not appear to be subsiding, as journalists seem to have engaged in Trump’s game. Much in the same spirit, Orbán’s Hungary occupies the 89th position in RSF’s ranking  — the lowest for an EU member. Its measures against independent journalism have been much more coercive and restrictive than America’s, perhaps simply because Trump would be unable to adopt such contentious measures given the importance of congress in the American political decision-making process.

Whether through legal repression or public harassment, however, both countries are increasingly normalizing hostility towards the press. The COVID-19 pandemic has merely put into focus this ongoing trend. In light of this, Hungary and the US have raised serious questions regarding the health of democracy around the world.

Can democracy properly function without the counterbalancing mechanisms provided by the press? Can the press work properly without strong protections and independence? This year’s edition of WPFD was held at a time when these questions were more relevant than ever. But WPFD’s purpose remains largely symbolic. Press freedom is at a crossroads, and concrete actions, not symbols, will be required to lead these two countries in the right direction.

Featured image: Donald Trump at a press conference in 2019. Photo by The White House. Licensed under Public Domain.