How COVID-19 Is Worsening the Crisis in Yemen 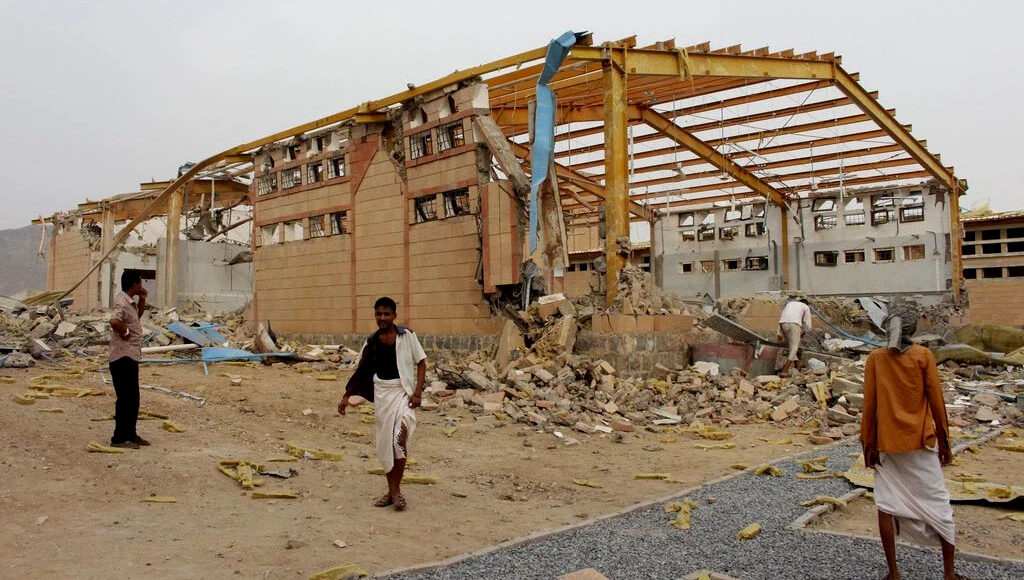 A medical facility destroyed by a Saudi air strike depicts how Yemen’s health infrastructure is crumbling due to the ongoing war. “Cholera Treatment Center” by Essa Ahmed is licensed under CC BY 2.0.
Share

“COVID-19 shook countries with advanced health systems and services. What will it do to a country like Yemen that has lived in the shadow of war for five years?” This statement, made by Yemeni pediatrician Nahla Arishi, clearly highlights the nation’s main concern right now. While the COVID-19 pandemic has spread worldwide and had detrimental effects on all nations, it hit Yemen particularly hard. Considering that the country is already undergoing what has been described as the world’s “worst humanitarian crisis”, the pandemic’s repercussions could be beyond disastrous.

The war in Yemen has lasted for years, with the crisis intensifying since 2014. The nation’s economy has been crumbling for decades, in large part due to corruption within the government. As a result, Yemen and its people continue to face constant food instability, unemployment, and a depletion of essential resources. In 2018, the fighting reached an all-time high. The two sides, the Houthi rebels and a coalition of Gulf States led by Saudi Arabia, battled for control of Yemen’s major port city, Hodeidah. The city, which had been under the insurgents’ control since 2014, was the entry point for more than 80 per cent of the nation’s food imports. In the midst of this ongoing conflict, during which the Saudis led a blockade on Hodeidah in an attempt to regain command of the region, the flow of supplies to Yemen’s civilians from Western nations was halted, bringing them to the brink of famine. While the United Nations and humanitarian aid groups have managed to de-escalate the crisis in the past and successfully transfer emergency resources and funds to over 20 million starving Yemenis, the same is unlikely today considering the added financial pressure of COVID-19.

According to the United Nations’ head of humanitarian operations in Yemen, the number of deaths caused by the pandemic could “exceed the combined toll of war, disease, and hunger over the last five years.” More than 80 per cent of the population is in dire need of humanitarian assistance, a percentage which now consists of over 24 million people. Due to the ongoing war, the country’s health system is collapsing, making it one of the most vulnerable nations in the world. As a result, when the first cases of COVID-19 began to appear in early April 2020, the mortality rate soared to a whopping 27 per cent, which is more than 5 times the global median. According to reports, about 18 per cent of the nation’s 333 districts have no doctors. Out of communities with medical staff present, they have divided 500 ventilators and 700 care unit beds among them; this is a minuscule number of supplies for the size of the population suffering. As of October 2020, only 2,041 cases have been confirmed positive for COVID-19 since April. However, the chances of that statistic being accurate are low due to the minimal testing, lack of healthcare centers, as well as ongoing shortages of medical supplies and personal protective equipment.

The absence of a legitimate government is also affecting the country’s ability to handle the pandemic. Authorities have not been able to enforce quarantines or assure its people access to aid. As a result, public gatherings have continued and, with it, so has the spread of the virus. Even when the disease is contracted and symptoms are visible, Yemen’s civilians tend to avoid their healthcare facilities. The government’s lack of transparency on how patients with COVID-19 are treated has incited rumours that they are actually being euthanized, causing the population to avoid medical centers for fear of such an occurrence.

The crisis is additionally exacerbated by the cholera epidemic that has been present in Yemen since 2016. Almost four years later, over 1 million cases have been reported in the nation, making it one of the worst outbreaks in recent history. Yemen’s health care system was already overwhelmed by this critical situation, and compounded with the impact of COVID-19, there is no doubt that the country will require massive foreign aid.

This year, however, Western contributions to the aid funds have been rather limited. The United Nations asked the international community for $2.4 billion, an amount less than in past years, which the UN stated was essential even just to reinstate aid for basic living necessities in Yemeni communities. Food assistance has been reduced by half, and health care services entirely halted in parts of the country, thus already cutting down the amount of financial support deemed necessary. International donors pledged only $1.35 billion, an amount that, while helpful, does not come close to being nearly enough. The nation is not solely battling one crisis, but multiple critical ones; viral outbreaks, widespread hunger, and a collapsed economy, none of which can be rectified easily.

In large part, the justification for the absence of Western aid is that it has become increasingly complicated for donors to be certain of where their aid is being received. There have been numerous reports regarding disruptions of aid deliveries by the Iranian-backed Houthi rebels, hence the hesitancy to contribute. This particular link to Iran further explains the massive cut in donations to humanitarian organizations by the United States, as they consider Iran to be one of their major foes. More than 30 of the 41 UN programs providing vital assistance in Yemen could be shut down this year, as the current US administration cancels tens of millions of dollars in aid on account of it being consistently diverted by the insurgents. Closing such facilities definitively could have deadly repercussions for Yemeni civilians, especially considering that at least 70 per cent of the population depends on them for access to necessities like food and drinkable water.

In addition to their lack of provision of aid through humanitarian groups or branches of the United Nations this year, nations like France, Germany, and the United States have maintained their ongoing arms trade with Saudi Arabia, one of the major actors in this conflict. Funding such an aggressor worsens the situation for Yemeni civilians, and decreases the legitimacy of Western states when they provide aid for other humanitarian crises. Their actions become much less impactful considering that they will not even speak out against Saudi Arabia for their blatant abuse of human rights in Yemen, a decision which practically makes them complicit in such violations.

The situation has been labelled “the worst humanitarian crisis” in the world for years, yet it does not seem to be close to its end, and the situation for millions of Yemeni civilians worsens each passing year. The COVID-19 outbreak this year placed additional stress on Yemen’s remaining resources ― one that the nation has not been able to handle. Unless effective international actions are taken, the country will likely continue down the negative spiral of increased poverty and famine indefinitely.

The featured image, “Cholera Treatment Center” by Felton Davis is licensed under CC BY 2.0.