How Malaysia’s Democratic Transition Came to a Screeching Halt 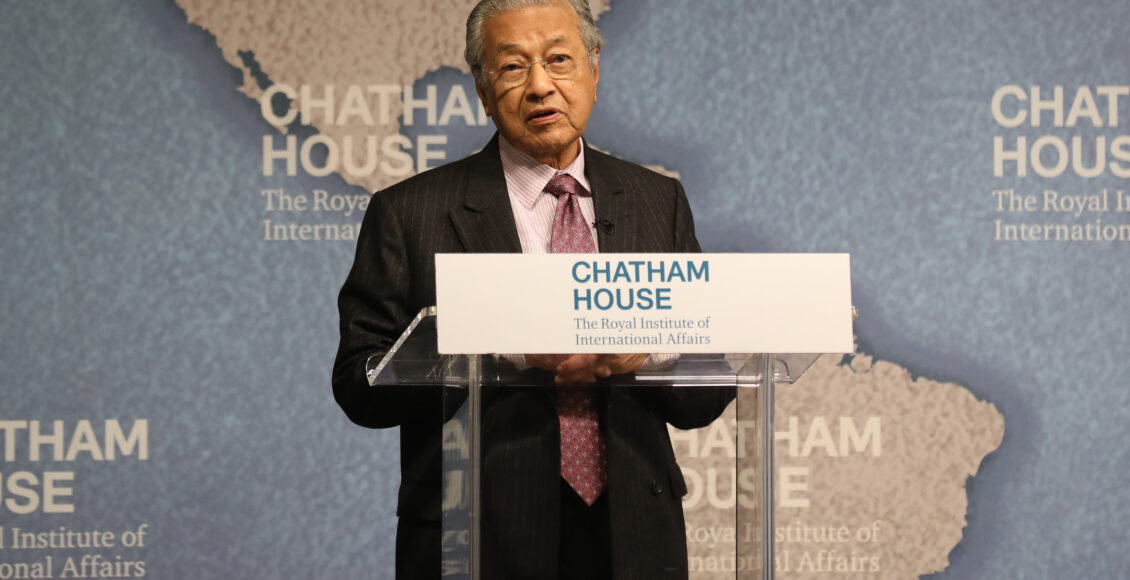 "HE Dr Mahathir bin Mohamad, Prime Minister of Malaysia" by Chatham House is licensed under CC BY 2.0
Share

Less than two years after Malaysia’s 2018 elections which ousted the long-ruling coalition Barisan Nasional, Malaysia’s democratic transition appears to have come to an abrupt halt. Malaysia’s first transfer of power in 60 years was praised for reversing the global trend of democractic backsliding, exemplified in countries such as Brazil, Hungary, and the Philippines. However, several months of an all-too-familiar mix of backdoor political maneuvering and alliance-switching came to a head on May 18th, when the country’s first ever one-day session of parliament took place.

During this session, King Abdullah of Pahang stated that the March 1st appointment of Muhyiddin Yassin as prime minister was constitutional, as an opposition vote challenging Muhyiddin’s leadership was postponed in favour of focusing on COVID-19 concerns. Although the king must act in accordance with the will of the cabinet and parliament, he reserves the power to appoint the prime minister. After then-prime minister Mahathir Mohamad resigned on February 24th, the king opted to interview party members to see who could command a parliamentary majority, rather than call an election. This enabled several top politicians to make a power play, with Muhyiddin coming out on top after removing Mahathir’s political party, Bersatu, from the ruling coalition Pakatan Harapan (PH) and forming government with the previous regime. The now Muhyiddin-led Bersatu and key actors from Barisan Nasional, including the United Malays National Organisation (UMNO), have coalesced into Perikatan Nasional, who currently holds 113 of the 112 seats necessary for a parliamentary majority.

Malaysia’s tumultuous democratic transition is further hampered by the fact that Muhyiddin has been given monarchical approval to rule, despite lacking democratic legitimacy. Moreover, Muhyiddin’s government is composed of actors ousted in the 2018 election, including former prime minister Najib Razak, who is facing corruption charges related to the alleged looting of billions from the 1MDB sovereign fund. Although the recent fracturing of PH is partially to blame for the collapse of Malaysia’s democratic experiment, a number of structural factors showcase PH’s inability to uproot the vestiges of corruption associated with the former regime.

The consolidation of power by Muhyiddin’s government speaks an underlying truth of Malaysia’s budding democracy — political change continues to be motivated by the ambitions of top-ranking officials, rather than the ballot box. Mahathir’s resignation, the catalyst for the recent political upheaval, came after reports that his party was abandoning his shaky succession plan to hand over the prime ministership to Anwar Ibrahim. His resignation sent shockwaves through Malaysia’s political arena, with the king naming Mahathir as interim prime minister until an election was called.

However, this election never came. Amidst mounting COVID-19 concerns, Mahathir’s former ally, Muhyiddin Yassin, took control of Bersatu, the party he co-founded with Mahathir, and forged a new alliance with members of Barisan Nasional. The backdoor origins of Muhyiddin’s government are reflected in its patrimonial tendencies, wherein his efforts to build support have included dispensing ministerial and special envoy positions to over half of the parliamentarians in his government.

Although the role of recent political developments cannot be understated when examining the beleaguered shape of Malaysian democracy, the incoherent internal makeup of Pakatan Harapan similarly contributed to its collapse. PH was able to defeat Barisan Nasional largely by absorbing elements of Barisan Nasional into the coalition. Notably, in 2016, Mahathir quit UMNO after the 1MDB corruption scandal, leading to the inclusion of Bersatu in the PH coalition. A well-established advocate for Malay rights from his first stint as prime minister, Mahathir’s split from UMNO caused other like-minded parties to join PH.

The inclusion of these parties got PH the votes necessary to win seats in Barisan Nasional strongholds but left the coalition ideologically unbalanced. The core of previous Pakatan coalitions, the People’s Justice Party and Democratic Action Party, are both progressive, multiethnic parties. However, PH incorporated many political actors that adhere to a Malay-first ideology in order to create the broad coalition necessary to defeat Barisan Nasional. This imbalance was reflected in the initial cabinet formation, in which UMNO-splinter elements were over-represented, causing resentment within more progressive factions of the coalition.

The PH’s electoral strategy also created a divided voter base, as many progressive voters had supported PH in the hopes of a Malaysia more inclusive of racial and religious differences. PH’s avoidance of racially-charged politics left many progressives unsatisfied, while UMNO gained popularity by chipping away at conservative segments of PH’s voter base. Ideological incoherence between coalition members translated into declining popularity, with PH performing poorly in recent by-elections.

Although Malaysia’s 2018 elections were the first transfer of power in Malaysia in 60 years, Barisan Nasional and its key component, UMNO, remained an influential political force. Moreover, the ubiquity of alliance switching in Malaysia’s political arena served as the perfect storm for UMNO’s return to power.

Despite suffering a surprise defeat in the 2018 elections, Barisan Nasional and its key partners avoided major internal reforms, and even retained members of parliament facing corruption charges. As Mahathir’s term wore on, it became increasingly viable for Barisan Nasional to wait out the implosion of PH and absorb members of the splintering coalition. UMNO’s stranglehold on the Malaysian political arena can be seen through their dominance in Muhyiddin’s newly-appointed cabinet. Although forming backdoor governments is undoubtedly an affront to democratic transition, patchwork alliances held together by political appointments is a mainstay of Malaysian politics.

The Challenges of Killing Kleptocracy

Malaysia’s troubled path to consolidate democracy is also rooted in the country’s longstanding legacy of kleptocracy. In his 21 months in office, Mahathir’s government was successful in pushing through some institutional reforms, including initiating plans to make the country’s election commission nonpartisan. However, the recent actions of the Muhyiddin government demonstrate that vestiges of corruption and patrimonialism remain. The recent decision to drop money-laundering charges against Riza Aziz and allow political appointments to government-linked agencies have resurfaced uncomfortable memories of the 1MDB corruption scandal.

Mahathir’s baggage as the former leader of UMNO and prime minister of the one-party regime from 1981 to 2003 did not bode well for Malaysian democracy. During his first tenure as prime minister, Mahathir institutionalized authoritarian structures that kept Barisan Nasional in power, while also cracking down on opposition parties. Although Mahathir stated that the 1MDB scandal was the catalyst for ousting his former party, Mahathir himself, in addition to elements of PH, remained inextricably linked to the legacy of patronage and personalized politics of Barisan Nasional. Perhaps it should come as no surprise then that the Mahathir-led transition to democracy has been thwarted by a series of backdoor deals involving kleptocrats from the former regime.

The future of democracy in Malaysia is uncertain, as continued alliance-switching in Malaysian politics does not prevent a possible return to power for both Mahathir and PH. However, the COVID-19 pandemic has shifted the focus to limiting its economic and social impacts, partially shielding Muhyiddin from criticism. As elsewhere in the world, COVID-19 has acted as a boon for authoritarianism by preventing the public from following up on earlier protests against the creation of Muhyiddin’s backdoor government. COVID-19 has also enabled the state to revive practices of media suppression, such as restricted media access to the May 18th parliamentary session.

In addition to the bleak political situation, it has become clear that COVID-19 will wreak havoc economically, possibly on the scale of the 1997-98 Asian Financial Crisis. This crisis fundamentally upended politics throughout the region, causing the fall of the Suharto regime in Indonesia and spawning the Reformasi movement in Malaysia, which, in turn, brought about the proliferation of opposition parties that would eventually coalesce into Pakatan Harapan in 2018. Although its transition to democracy may have been derailed in recent months, the imminent economic upheaval in Malaysia may act as the catalyst for profound political change.