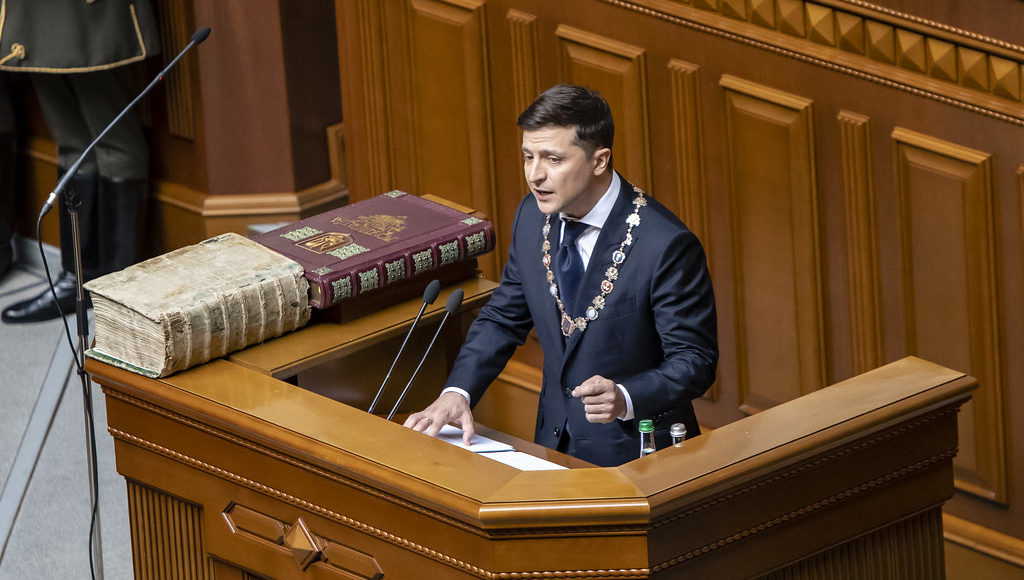 The Current State of Affairs

When 41-year-old comedian Volodymyr Zelensky began his term as President of Ukraine on May 20th, he did so four years after his on-screen persona, a high school history teacher, took the very same office. Mr. Zelensky’s extraordinary triumph vindicates his oddball campaign strategy, which not only lacked concrete policy positions and relied heavily on pop culture awareness, but also channeled a populist movement that defied expectations. In winning the election, Zelensky claimed victory over incumbent president Petro Poroshenko, an influential oligarch who had led the country since 2014. He defeated Poreshenko by 14 points in the first round of elections, which featured 39 candidates, and beat him once again in a run-off, earning 73.22% of the vote to Poroshenko’s 24.45%. The departing administration had become deeply unpopular since it was unable—or unwilling—to stop rampant corruption in the judicial and financial systems, paving the way for an insurgent celebrity president in Mr. Zelensky.

The new president soon dissolved the Rada, Ukraine’s unicameral parliament, and called for a snap election for July 21st, urging citizens to defeat the ruling European Solidarity party (formerly known as the Petro Poroshenko Bloc) once and for all. Mr. Zelensky’s nascent party, named Servant of the People after his television show by the same name, gained 254 of the 424 seats available, a clear majority. This victory is particularly significant since the Ukrainian system designates much more power to the Rada than to the President. The success of Mr. Zelensky and his party have immediate implications for Ukraine, whose future has never been less clear.

How We Got Here

Through his Netflix show, Mr. Zelensky created a cult of personality that has directly fueled his political success. In Servant of the People (2015-present), Mr. Zelensky played Vasyl Holoborodko, a high school history teacher whose rant about the broken Ukrainian political system makes him a viral sensation overnight.  Holoborodko strikes a chord with the public by pledging to recover political power from the oligarchs who have traditionally dominated Ukraine’s governing system. His tenure as president is a light, comedic affair; he lives with his parents, shows up to press conferences unprepared, and enlists his own friends as his cabinet members. Netflix categorizes the show as “Fight the System.”

Holoborodko’s enemies in parliament have clear parallels to real-life personalities as well. Antagonists Zhanna Borysenko and Dmytro Surikov, for example, possess traits similar to former prime minister Yulia Tymoshenko and former president Poroshenko, respectively, like the characters’ insatiable greed and obsession with support from Ukraine’s wealthy oligarchs. The bumbling, hilarious TV president, in contrast, demonstrates how good leadership and empathy can solve Ukraine’s corruption problems and restore prosperity to a nation whose economic progress has stagnated over the last decade.  The parallels to Mr. Zelensky and his populist rhetoric are undeniable.

Furthermore, the corruption scandals of the last two Ukrainian presidents provide necessary context for Servant of the People‘s success. Viktor Yanukovych, who was elected President in 2010, is infamous for a laundry list of alleged crimes, including embezzling from the state treasury, groundlessly imprisoning political opponents, censoring unfriendly journalists, and facilitating electoral fraud. The clearest symbol of his outrageous corruption was Mezhyhirya, his mansion, which he built and upgraded using public funds; inside, he housed 36 luxury cars, a yacht, and—most famously—an ostrich farm.  In late 2013, over one million Ukrainians took to Kiev’s Independence Square to protest Yanukovych’s corruption in the Euromaidan rallies, his withdrawal from a European Union-led trade deal, and his administration’s friendliness with Russia. The Rada forced him into exile in 2014 and the ensuing election brought to power President Poroshenko.

While Mr. Poroshenko paid lip service to the anti-corruption movement, he could not escape his own set of scandals. For instance, he reneged on a campaign promise to renounce control of his lucrative confectionery corporation, Roshen. Roshen’s success has made Mr. Poroshenko the eleventh richest person in Ukraine, and the media often refers to him as the “chocolate king,” which has made him a clear symbol of the oligarchy that so many Ukrainians despise.  Furthermore, the Panama Papers of 2016 implicated Mr. Poroshenko in a harmful tax evasion scheme by revealing an offshore bank account he established within weeks of ascending to the presidency in 2014.

Given Mr. Poroshenko’s record, then, it’s no wonder that Servant of the People and its anti-establishment mission became successful during his reign and catapulted Mr. Zelensky into the national spotlight.  Public approval of Mr. Poroshenko’s government had dropped precipitously by the end of his term; Gallup reported on March 21st, 2019 that “just 9% of residents have confidence in the national government, the lowest confidence level in the world for the second straight year.” Mr. Zelensky founded the Servant of the People party in March 2018 and officially declared himself a candidate for president in December.  He trailed in national polls until February 2019, and built momentum before securing victory in March.

A Challenging Road Ahead

Fixing Ukraine’s corruption and its economic woes will not be easy, and red flags have already begun to emerge around Mr. Zelensky’s Servant of the People party. The most devastating accusation against the president is that he secretly serves Igor Kolomoisky, a Ukrainian billionaire who owns a controlling stake in the 1+1 channel which broadcasts Servant of the People and allowed Mr. Zelensky unprecedented air time to share his campaign proposals.  Mr. Zelensky’s attachment to the 1+1 channel is also controversial because it is an exception to his personal policy about major media outlets. He refused to speak to most mainstream journalists throughout the campaign and spoke to people only through YouTube or on the 1+1 channel, advertising himself as a truly common man who would not play the standard political game.  Journalists frequently complained about their lack of access to Mr. Zelensky, which critics say allowed him to escape important campaign questions and win votes on his popularity alone.

Servant of the People’s often confusing ideology has also become a point of contention. Party leaders have declared libertarianism as their driving policy platform and they vouch for closer ties with the EU and NATO, but it is unclear how these policies will manifest. Party members attended a week-long legislative and economic boot camp at the Kiev School of Economics to prepare for office since none of them have any experience in the Rada. The university president compared the camp to training “intellectual Navy Seals.” The Kiev Post expressed doubts about party dynamics: “The participants are as diverse as can be. There are top managers and the unemployed, university professors and people whose only degree is from high school. The only common trait they have is that none of them have ever been in parliament before.”

On one hand, if Servant of the People can deliver on its promises to the Ukrainian people, then their lack of experience will sound endearing in the long term. On the other hand, there is a very real possibility that the new lawmakers will struggle to accomplish their goals. The Rada is uncharted territory and its policies, if not implemented correctly, will have serious consequences for the fate of Crimea and for the future of Ukraine’s conflict with Russia in the east.  Ukrainian leaders in the past have campaigned vigorously against Russian interests, but have often fallen prey to them anyway; Mr. Yanukovych is the best example of this since he was a fairly explicit ally to Russian President Vladimir Putin during his time in office.

Mr. Zelensky has a chance to make 2019 a turning point in Ukraine’s troubled history. The Ukrainian electorate has thrice voted in favor of his strong populist movement, twice in the presidential elections of March and April, and once again in the parliamentary elections of May. The power of his celebrity is unprecedented; he moves with all the grace and humor of President Holoborodko, his alter ego from Netflix, and he can transform the Ukrainian political landscape permanently if he wishes.  First, however, he must prove to Ukraine’s exhausted population that he won’t repeat the mistakes of former presidents Viktor Yanukovych and Petro Poroshenko.  For the celebrity president, earning votes was—surprisingly—the easy part; maintaining public trust, meanwhile, will be significantly more difficult, especially in a nation where widespread corruption and pervasive distrust of the government have long defined politics and civil society.

The featured image “On May 20, during the solemn session of the Verkhovna Rada in Kyiv, newly elected President of Ukraine Volodymyr Zelensky was sworn in as Head of State” by usembassykyiv is licensed under CC BY-ND 2.0.