Human Rights and Human Empathy: A Review of the “Canada on the Global Stage” Conference 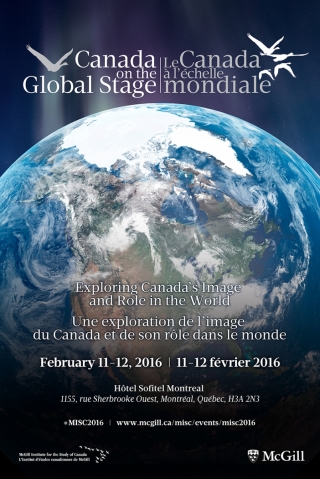 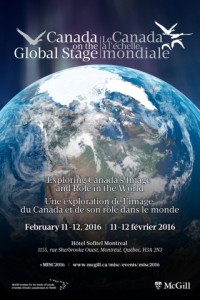 Last week, McGill hosted the “Canada on the Global Stage” conference. Friday’s programming consisted of two sections – a keynote speech entitled “Making Up for a Lost Decade: What Should the New Government Do?” by NDP Spokesperson on Foreign Affairs Hélène Laverdière and a panel entitled “Human Rights and Global Migrations” with Robert Steiner, Jillian Stirk, Stephen Toope, and moderated by Laurin Liu.

Hélène Laverdière spoke critically of the state of Canadian government under the Harper years. As a former Foreign Service Officer, Laverdière commented on the declining global reputation of Canada over the past ten years – international commitments always came second, diplomats were in the dark, human rights commitments dwindled and it
appeared that our country did not care about the world around us. She stated that “Influence is the major currency in international affairs”, speaking to the fact that without greater roles in international organizations such as the UN, Canada cannot show itself to be a major actor in global politics. After these criticisms, Laverdière gave her own list of suggestions for the new Trudeau government. Among many, she stated that we must re-engage with international institutions and renew our role as an honest broker, repair diplomatic relationships in Africa and Latin America,  and sign various important treaties such as the Arms Trade Treaty & Desertification Convention. Her suggestions were strong, highlighting efforts to “walk the walk” on human rights & diplomatic issues, both near and dear to Laverdière. As a member of the NDP, it was clear to me that she is worried about the Liberal government’s ability to produce meaningful changes in terms of international perception of our country. It would appear that many of the suggestions given will be taken into consideration as they pertain to the mandate of the Liberal Party but time will tell if Trudeau and his cabinet are capable of delivering the promised “Real Change”.

The second part of the afternoon consisted of a panel discussion with Director of the Fellowships in Global Journalism at the Munk School of Global Affairs Robert Steiner, former Canadian ambassador Jillian Stirk, and Director of the Munk School of Global Affairs Stephen J. Toope. Moderated by former NDP Member of Parliament & McGill University student Laurin Liu, this panel focused on ways in which human rights must be taken into consideration with current global migration patterns, particularly those of refugees & IDPs around the world. With his background in global journalism, Robert Steiner touched on ways in which traditional media is changing; with the emergence of global correspondence, “We can experience what people are going through in their own terms”. Jillian Stirk stressed the importance of understanding what foreign policy looks like pluralistic societies such as that of Canada as well as coming to grips with the fact that global migration is a major issue of the 21st century and an intrinsic 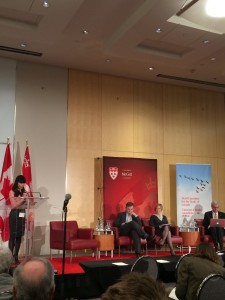 feature of globalization. She called on the Trudeau government to issue global migration policies that truly embrace the pluralistic nature of Canada as a whole. Stephen Toope provided alternative ways of thinking to the current mandate of the Trudeau government, stating that while it is ultimately good that our country will bring in up to 50,00 Syrian refugees, the amount of money it takes to support those 50,000 refugees is equal to 20 years of supporting the UNHDR. Toope also pointed out that we ignore millions of refugees from other countries around the world at any given time and while it is important that we help Syrians in any way possible, it is a microcosm of the root of the issue – the denial of basic human rights for millions upon millions of people. After speaking individually, a Q&A session followed up on specific issues of interest to audience members with questions such as “How do we make human rights a constant lens of commitment?”, “What other opportunities does Canada have on the confluence of migration & climate change?”, and “How do you go about finding reporters in conflict areas who are able to provide local coverage and can the Canadian government provide support?”. I found the thoughts of Jillian Stirk to be the most valuable – as a former ambassador, she has been on the ground in diplomatic posts, had to deal with negative opinions about Canada’s image and commitment to human rights issues, and grapple with what the government should do in order to improve conditions of global migration, not hinder them.

Over the course of the afternoon, each person on stage expressed a desire for the similar outcomes – a Canada that is seen as strong, committed to issues of human rights & global migrations, and welcoming of those who enter our borders. Overall, it was an insightful two hours of criticisms and suggestions for both the old and new governments.