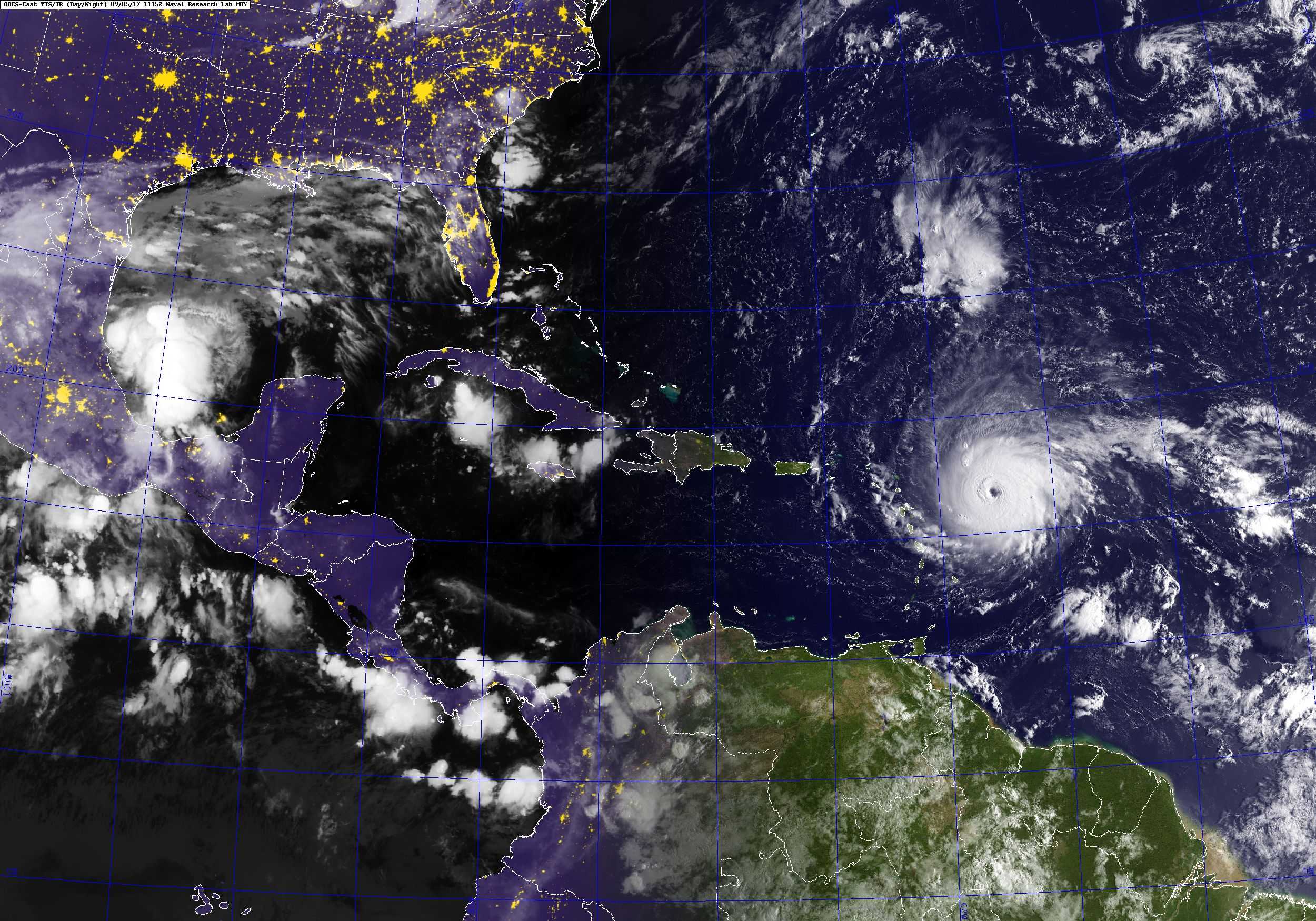 ATLANTIC OCEAN (Sept. 5, 2017) A GOES satellite image showing Hurricane Irma in the Atlantic Ocean. The storm is a category 4 hurricane on the Saffir-Simpson hurricane wind scale. Maximum sustained winds have increased to near 150 mph (240 km/h) with higher gusts. Some fluctuations in intensity are likely during the next day or two, but Irma is forecast to remain a powerful category 4 hurricane. Hurricane-force winds extend outward up to 45 miles (75 km) from the center and tropical-storm-force winds extend outward up to 140 miles (220 km). The estimated minimum central pressure is 937 mb (27.67 inches). (U.S. Navy photo/Released) 170905-N-N0101-001 Join the conversation: http://www.navy.mil/viewGallery.asp http://www.facebook.com/USNavy http://www.twitter.com/USNavy http://navylive.dodlive.mil http://pinterest.com https://plus.google.com
Share

In recent weeks, a series of hurricanes and tropical storms have hit the Caribbean and Southern United States. Hurricane Harvey, Irma and now Jose and Maria have flooded and destroyed thousands of homes, resulting in massive relief efforts, with more storms on the way. This year will be the most destructive hurricane season since 2005, with Hurricane Irma the strongest hurricane to ever form in the Atlantic outside of the Gulf of Mexico and Caribbean. This is also the third consecutive year hurricane season has begun early, in April rather than June.

The increased number of hurricanes is linked to rising global temperatures caused by human activity. This warmer air is capable of holding more moisture, increasing the likelihood of hurricanes and increasing levels of flooding. Climate change experts note that hurricane season will continue to worsen and lengthen. The greenhouse gases we release today will continue to affect the environment and contribute to rising temperatures for the next 50 years, resulting in more and more extreme temperatures and weather patterns.

Small islands and coastal states have the most to fear from the increase in flooding and violent storms. Not only has the Caribbean been hit hard, but floods in India, Nepal, and Bangladesh have displaced hundreds of thousands of people and resulted in 1,200 deaths so far. This monsoon season is the worst in years, resulting in food and water shortages, death, and displacement that will not be easy to recover from.

Climate change is a difficult issue to address, not only because of its scope, but because of the

varying effects. For example, there is no correlation between the amount of pollution that a country releases and the devastation it has to fear from rising temperatures. The world’s biggest polluters by CO2 per year are the U.S., China, and India, with countries in North America and the Arabian Peninsula topping the charts when considering emissions per capita. Comparatively, the countries that will be most hurt by climate change are poor small nations in South America and the Pacific, making it easy for the world’s wealthy countries to sit in relative comfort while thousands face the loss of their homes and livelihoods.

Rebuilding after natural disaster is a massive undertaking, especially for countries that are likely to be devastated again in the future and lack sufficient resources. For example, Dominica has been absolutely devastated by Hurricane Maria. Prior to the storms, Dominica was experiencing droughts and extreme conditions that debilitated an already struggling economy. In the aftermath of the Hurricane, Dominica is making plans to build sustainable and extreme weather-resistant infrastructure, but they are dependent on the rest of the world to help rebuild.

While China and India may be two of the world’s biggest polluters, they are also the world’s two biggest countries that are taking steps towards addressing their emissions and moving forward in a sustainable manner. India, who will be hit hard by continued flooding, has taken steps towards regulating greenhouse gas emissions. Prime Minister Narendra Modi even noted the role that climate change has played in shifting weather patterns. China has also become the world leader in renewable and alternative energy resources. Furthermore, these countries have the opportunity to industrialize in a sustainable manner.

The United States, on the other hand, has a long way to go. The current administration has openly rejected the legitimacy of climate change and worked to undo the progress of previous administrations. In the wake of devastation along the Southern United States and Puerto Rico, the head of the Environmental Protection Agency under the Trump Administration has called talks of climate change “insensitive.” Previously, President Trump has threatened to pull out of the Paris Climate Agreement, the first comprehensive climate change pact since the Kyoto Protocol. During his first appearance at the U.N. this week, he stated has no plans to attend meetings on climate change. The U.S. is the world’s largest carbon polluter in history, and clearly the vulnerable people of the world cannot wait for the President and his private jet to acknowledge them.

The discrepancy between countries that hold power and places devastated by floods and hurricanes replicates the distribution of colonizers and colonies and, in some ways, the profit of colonizers at the expense of them. For example, the U.K, France, and the Netherlands all have island territories in the Caribbean that were hit hard by this year’s hurricane season, but they have been slow to react, with the U.K. and France being openly criticized on their slow response to the devastation of these islands. Even the U.S. response has largely favoured its contiguous states, overlooking Puerto Rico and the U.S. Virgin Islands who were hit hard by hurricanes Irma, Jose, and Maria. The storm response is another note in a history of neglect for these island territories.

This summer has seen massive devastation across the globe as a result of rising temperatures. The link between climate change and this extreme weather cannot be ignored and neither can the precarious positions of countries and territories affected by these storms. Not only do territories need their national governments to commit to aiding recovery over the next ten years, but the world needs wealthy powerful countries to commit to addressing climate change in the long term.