I am Woman, Hear Me March 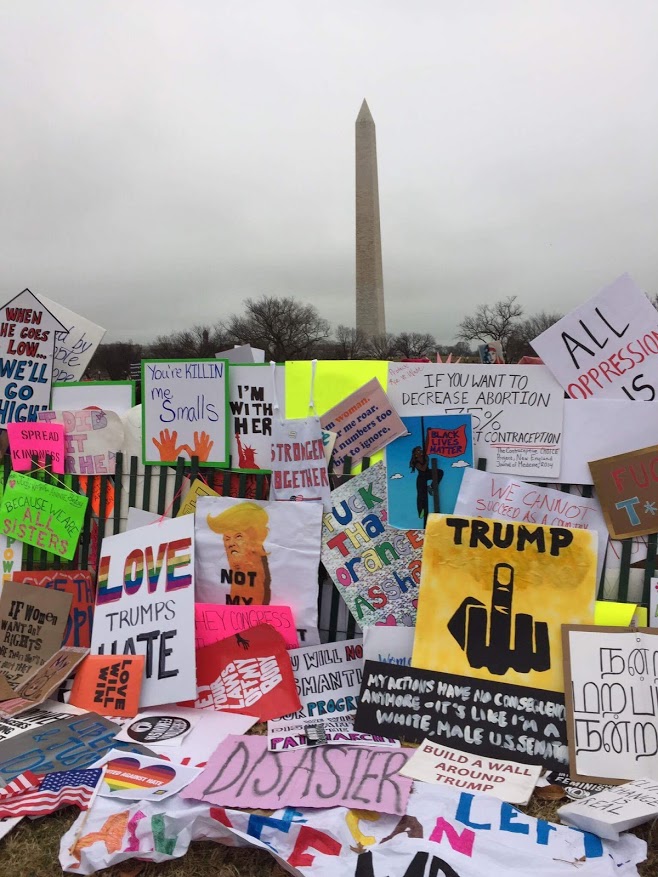 In front of the white house participants in the Women's March created a 'wall' of protest signs. Photo taken by author.
Share
Advertisement

The past week has been full of celebration, protests, and marches within the United States and around the world. Donald Trump’s inauguration weakly attracted 160,000 audience members and a few billionaire VIPs. A fact Senator Bernie Sanders claimed he found amusing: “that you’re [Donald Trump] attacking the establishment when the establishment is sitting right behind you”. In fact, billionaire donors and supporters are no strangers to the Trump administration. It has been estimated that the combined net worth of Trump’s cabinet nominees is estimated between $6 billion and $14 billion, which is greater than one-third of American household incomes. While the United States hastily condemns corrupt foreign governments, the highest office in the country is now the most unqualified and wealthiest cabinet in United States history. Trump’s nepotism towards business tycoons, generals, and his own family when building his cabinet is near identical to dictatorships and kelptocracies like Qaddafi’s Libya and Saddam’s Iraq.

Much can be said about the 45th president of the United States. He has the lowest approval rating of any president in the history of the United States, his cabinet includes more white men than any cabinet since Ronald Reagan, and he has already pulled the United States out of the Trans-Pacific Partnership. A partnership which was negotiated by Barack Obama to increase US influence in the Asia Pacific region. He also signed to continue with the expansion of the Dakota Access Pipeline, a natural gas line that infringes upon Native American burial grounds and whose construction was halted under the Obama administration. A Day of Patriotic Devotion was also established by the Trump administration, with rumors swirling about the document’s language mimicking that of former head of Breitbart ‘News’, Steve Bannon.

The Women’s March on Washington included 673 official marches worldwide and an estimated 4,834,000 marchers. An estimated 2.9 million people in the United States alone protested the presidency of Donald Trump, the right to safe and legal abortions, intersectional women’s rights, and a host of other pressing issues such as black lives matter, immigration, wage equality, justice for sexual assault survivors, disability, indigenous and LGBTQIA rights. The organization is also engaging in “100 Days of Action” which includes 10 actions, such as letter-writing, to protest the presidency and push members of congress to protect organizations, such as Planned Parenthood, and speak on behalf of issues individuals find important. The march was the largest inaugural protest in United States history, sending a strong message to the Trump White House. Despite the strong turn-out, the Trump Administration had little to say apart from a short tweet condemning marchers and celebrities.

The Women’s march has also garnered criticism from intersectional groups who claimed the march only included views from ‘white feminism’ and excluded a vast array of values such as racial, indigenous, and LGBTQIA. One reason for this is the history of feminist and women’s movements that spoke out mainly for cisgender, white, middle class women’s rights. The organizers of the DC march were a group of women from varying racial, ethnic, and religious backgrounds. The organization hosted prominent speakers such as Director of Native Organizers Alliance Judith LeBlanc, President and CEO of National Coalition on Black Civic Participation Melanie Cambell, Communications Associate for Transgender Law Center Rachel Willis, immigrant rights activist Sophie Cruz, Junior Illinois State senator Tammy Duckworth, and Council on American-Islamic Relations spokeswoman Zahra Billoo were among the many other speakers and organizers involved in the rally. It is clear the organizers, apart from publishing that the march was intersectional in nature, went to great lengths to include members of a wide variety of groups.

‘White Feminism’ is a term coined for a myopic, exclusive form of ‘feminism’ that promotes white, middle class, values, and disenfranchises all other groups by not recognizing white privilege and racial oppression. The topic is difficult to address due to the negative connotation of the term feminism. The issue originates from extremist, religious groups (oftentimes fearing rebellion against a patriarchal form of family and church life), fragile men who fear women’s equality, and anti-feminist smear campaigns led by both men and women. On the opposite end of the spectrum, self-identifying feminists argue on the movement’s definition, who should be involved, and the issues that need to be addressed by its members.

“There have been at least half a dozen U.S. cases where women have been arrested and charged after attempting to self-induce an abortion using illicitly obtained abortifacients.”

The Women’s March on Washington stated what it called its ““Unity Principles” to inform everyone involved for what they were standing up by marching. A seemingly simple task garnered protests from anti-choice groups due to the clause on reproductive rights, which included “open access to safe, legal, affordable abortion and birth control for all people, regardless of income, location, or education”. However, organizers and marchers spoke out on social media, in the news, and at the march with signs spreading the message “My Body My Choice”. Proving, despite arguments, that women’s rights, or more appropriately, equal rights, require that women’s bodies are not legislated by the government.

Another executive order termed ‘The Global Gag Rule’ prohibits “U.S. taxpayer funds from going to international family-planning organizations that provide abortion-related services, even if they use non-U.S. funds to offer advice on where to obtain an abortion”. January 22nd, the date the executive order was signed, is also the anniversary of monumental supreme court decision Roe v. Wade, which legalized abortion in the United States. However, the battle for women’s abortion rights rages on as states attempt to block and place time limits on legal abortion access. Oftentimes regardless of medical needs and emergencies of the woman carrying the fetus, such as in Ohio, Indiana, and Texas. Many laws have included sections that force women to have a funeral for the fetus after long and emotionally taxing, ‘counseling’ and wait periods as well as prison time and fines for illegal abortions.

There is great validity to the argument that the Women’s March itself was greatly lacking in its intersectionality. There was little recognition of the fact that 67% of white voters and 53% of white women voted Trump into office. Many had signs assigning the female reproductive system to womanhood, making many transgender marchers and viewers feel invalidated. Historically, men and women have attempted to silence voices of intersectionality claiming that ‘womanhood’ is what brings people together for a common cause, which alone is troubling for the transgender community. The march itself was also originally named The One Million Woman March, coined from the original 1997 march whose aim was “to call attention to the marginalization of African-American women”. However, many feminists argued that a march founded by a white woman should not overshadow, or more strongly, appropriate, a protest for black empowerment and equal rights.

Zahara Hill, a Black Voices Editorial Fellow at the Huffington Post, published 11 Profound Photos from Black Women at the Women’s March, with the first being one widely spread by members of every intersection over social media. The photo is of a black woman holding a sign that says, “Don’t Forget: White women voted for Trump”. In the background there are three white women in pink hats, widely known as “pussy hats”, taking selfies in front of the Capitol Building. There lies a powerful message about the Women’s march, but more fundamentally, the United States political climate during the most recent election cycle; the major cleavage that remains between races. As cited above, white voters, educated and non-educated, were the largest racial group to vote Trump into power, while 94% of black voters voted for other parties.

The new presidency already has people fighting worldwide to maintain their rights and protect those of others. There are still many questions and doubts regarding Trump’s cabinet, a republican majority in congress, the future of foreign affairs and climate change. “Alternative Facts” combined with blatant disdain against the media and (constitutionally protected) protests, by the Trump administration provides little hope for the success of the administration. Many states are also emboldened to pass conservative legislation and test the limits of the Constitution. However, as the massive turn out to the Women’s March revealed, the people will not go quietly.

Feminism: “belief in the social, economic, and political equality of the sexes.” However, this definition is extremely broad and oftentimes every individual has a different definition.

LGBTQIA: “Abbreviation for Lesbian, Gay, Bisexual, and Transgender. An umbrella term that is used to refer to the community as a whole…. LGBTQIA [is used intentionally to include] and [make visible] the Queer, Intersex and Asexual communities under [this] umbrella.”

Transgender: “adjective used most often as an umbrella term, and frequently abbreviated to “trans” or “trans*” (the asterisk indicates the option to fill in the appropriate label, ie. Trans man). It describes a wide range of identities and experiences of people whose gender identity and/or expression differs from conventional expectations based on their assigned sex at birth. Not all trans people undergo medical transition (surgery or hormones)”