ICC Expands Remit to Environmental Crimes: Is This What the People of Cambodia Have Been Waiting For? 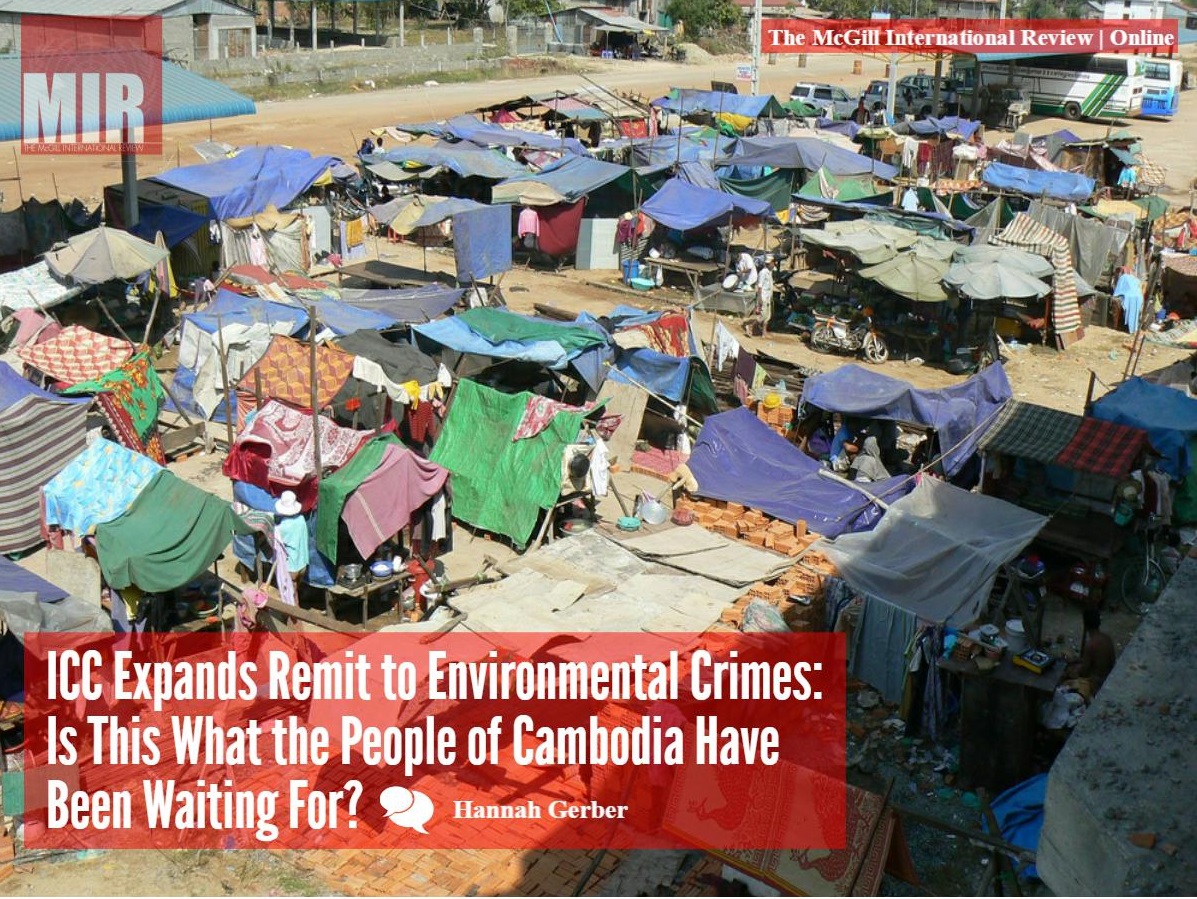 Cambodia’s land reforms in 2001 have led to over 10 years of violent and coercive land grabs, damaging the livelihoods of nearly 10,000 Cambodian citizens. These reforms initially legalized the act of spontaneous land-grabbing when such dispossession is justified by public interest of the state. Consequently, state-led evictions cause tremendous instability as people become at constant risk of losing their homes. Moreover, citizens are being violently coerced by armed state officials into homelessness, seeing as the state fails to provide adequate living compensation post-eviction; there are currently 350,000 Cambodians who are homeless and subsist on severe levels of poverty in direct consequence of land-grabbing.

As of last month the International Criminal Court of Justice (ICC) decided to expand its remit to prosecute governments for committing environmental crimes. This remit includes land grabs, since they are known to cause immense environmental degradation. The ICC also claimed to keep their focus on Cambodia with the expansion of this remit, as these land grabs are not only damaging the environment but also the livelihoods of people in Cambodia.

This is perhaps the first sign of hope since 2001 for the hundreds of thousands of people of Cambodia in search of immediate solutions. However, the damage of land grabs has taken a new turn that even the ICC remit cannot alleviate. Recent reports unveil shocking numbers of women in Cambodia who have since suffered from sharp increases in domestic abuse and chronic psychological damage that has led to a drastic increase in suicide. The Cambodian government has unfortunately demonstrated an ongoing unwillingness to acknowledge these issues. Thus, since this expansion of ICC remits will presumably have little effect, the damage that women bear demands the intervention from the Ministry of Women’s Affairs in Cambodia.

Cambodia’s property issues have a long war-torn history dating back much further than 2001. The struggle to own private property in Cambodia is somewhat consequential of the Khmer Rouge occupation in the mid-1970s, where most private property was turned into communal land, at the direction of the regime’s communist agenda. This lack of private property made it easier for state officials to justify displacing people in 2001, clearing space for foreign investment and stimulation in local tourist economies.

After the 2001 reforms, land-grabbing began to show damaging effects on the livelihoods of Cambodians. The World Bank attempted to lead a series of failed interventions to reinstate land titles to Cambodian citizens. Unfortunately, the World Bank’s intervention resulted in only a few Cambodians benefitting, with many more thousands of people falling through the procedural and bureaucratic cracks during the process, such as those in Boeung Kak Lake: a case that is expository of the reforms in 2001 and the problematic World Bank intervention.

In 2007, the municipality of Phnom Penh granted a 99-year lease within the region of Boeung Kak Lake, a settlement of approximately 20,000 residents, to the private development company Shukaku Inc. This lease withdrew land privileges to residents of Boeung Kak, permitting Shukaku Inc. to fill the lake up with sand and flood surrounding villages, leaving many locals homeless. Eventually, 4000 families were forcefully evicted from their homes. Despite the uprisings of the people of Boeung Kak who filed complaints to Cambodian courts in search of justice in 2011, all complaints were promptly rejected and the people were ignored by state elites. In 2014, nearly all of the 4000 families were forced to accept only one fraction of the market value of their property, leaving thousands in desperate poverty. This case serves to expose how land-grabbing in Cambodia has had repercussions beyond environmental degradation, which raises the question of whether or not the ICC’s environmental remit expansion will be effective in Cambodia.

Lawyers within the ICC acknowledge the human rights violations as well as environmental degradation caused by land grabs. Richard Rogers, a partner in the international criminal law firm Global Diligence claims that the ICC “will not make land-grabbing per se a crime, but mass forcible evictions that result from land-grabbing may end up being tried as a crime against humanity,” Rogers’s statement alludes to the fact that the remit will only serve to prosecute state-level corruption. However, instead of this macro-level prosecution, there is currently an immediate need for social and psychological domestic reparation in regards to Cambodian women who suffer from the implications of tenure insecurity.

Female survivors of land dispossession are coming forward and demanding intervention as their livelihoods take shocking turns for the worse. Hundreds of women, many from the Boeung Kak Lake case, have expressed the specificities of their suffering from land grabs, including their increase in vulnerability towards chronic depression and domestic abuse.

Besides the physical implications of land-grabbing depriving families of basic living-resources, recent studies show that tenure insecurity has had a particular effect on women’s mental health. A report released on September 27th from the Cambodian Centre for Human Rights claims that, out of the 612 homeless female victims of land grabbing that they surveyed, almost all state that their mental health has been negatively affected. More than half of them admitted to have attempted suicide.

This, thus, raises the question of why women are particularly affected by land dispossession. The report unveils that land grabs have hindered women’s ability to fulfill traditional Cambodian gender roles in their families. These roles include domestic work and food provision, both of which are responsibilities that depend on their land tenure and security —both of which are now at risk. Women’s household roles are thus threatened, causing women to be regarded as useless by men and leading to abusive marital relationships. This report brings to light the fact that domestic abuse towards women has escalated since the increase in land insecurity. Nearly 30% of the women questioned became victims of domestic abuse after having their land taken away from them. This increase in abuse, the report concludes, is mainly due to men’s employment loss, thus encouraging an increase in alcoholism and marital tension.

Clearly, the psychological damage that land dispossession has had on Cambodian women is impenetrable by means of the ICC remit. Instead, this issue requires more direct care from the Cambodian Ministry of Women’s Affairs, a ministry with resources designed to serve victims of domestic abuse and chronic depression. Unfortunately, representatives of this ministry refuse to acknowledge the issues that women are facing as legitimate justification for intervention and support.

In response to the report issued by Cambodian Centre for Human Rights, a representative of The Ministry of Women’s Affairs dismissed the survey and claimed that “domestic violence in land conflict is not under the mandate of the Ministry of Women’s Affairs,” ending her comment with a vague claim that women should “be more creative,” suggesting that engaging in public protests is the only course of action. However, past land dispossession cases like Boeung Kak demonstrate that protesting has little effect in terms of gaining civil justice in Cambodia. Although the expansion of ICC remits gives the people of Cambodia hope for future abolition of massive land evictions, it is not nearly enough for Cambodia to make a significant move forward as there are no plans for land reform or supportive action for women in sight. What Cambodia must do is consider reparation for the damage it has caused. For this, there needs to be a sense of accountability in order for the state to reimburse its hundreds of thousands of homeless citizens with housing and land. These are issues that the state must prioritize and channel its domestic resources, such as the Ministry of Women’s Affairs, towards in order to care for those that the international radar of the ICC will not necessarily cater to.