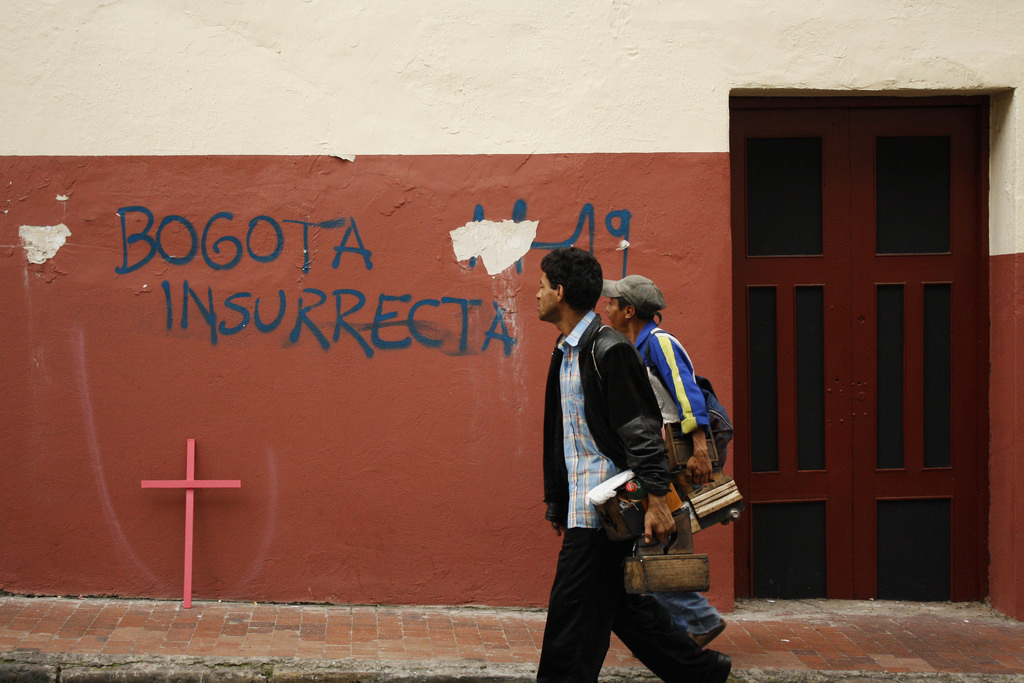 Men walking along side a pink cross. https://flic.kr/p/96h4Pk
Share

On the night of Thursday September 8, 19-year-old political science student Mara Fernanda Castillo went out clubbing with her friends. A little after five in the morning, she ordered a cab home from the popular Latin American Uber-like app, Cabify. The vehicle arrived promptly, but after boarding it, however, she never arrived home.

Mara was found dead near a motel in Santa María Xonacatepec, a small Mexican town 15 kilometers from the city of Puebla where she lived. It is suspected that she was sexually assaulted and strangled by her driver, the only suspect. The prosecution labeled the crime as a femicide. Femicide is described as a deliberate killing of a woman-identifying person based on their gender. Femicides are considered hate crimes. As a direct backlash of Castilla’s murder, over the past couple of weeks, thousands of Mexicans have marched across the country demanding response and solutions from the government to the femicide epidemic that has been plaguing the country. Castilla’s death has once again cast a spotlight on machismo violence in Mexico and Latin America.

According to the Economic Commission for Latin America and the Caribbean, 12 women are murdered everyday in the region for the sole fact that they are women.. Latin America is considered one of the worst regions in the world to be a woman: seven out of the ten countries with the highest rates of femicides are located in the area. Moreover, there is a higher-than-average level of domestic violence in the region. Mexico is by far one of the most affected with six women murdered everyday. According to Ana Guezmes from United Nations Women, “femicides are a pandemic in Mexico”. The word “femicide” entered the Mexican vernacular in the 1990s where there was a wave of misogynistic violence in the border city of Juárez. Despite various governamental efforts and international attention, the femicide issue persists and it is bigger today than it ever was in Ciudad Juárez. While it is hard to establish a reliable figure, it is estimated that at least 1,530 women were murdered in the border city of Juarez from 1993 to 2014. Today, the number across the State of Mexico is around 500 more women during the years of 2005-2011.

The indifference of the authorities and the Mexican government to these cases of femicides make impunity very easy for the perpetrators. One of the most notable cases is the death of Mariana Lima Burendia whose parents are conviced was murdered by her then-husband after repeated death threats and domestic abuse. On the night of her death, she went to ask her then-husband, Julio César Hernández Ballinas, for a divorce. A couple of hours later, Ballinas called Burendia’s mother to tell her that Burendia had hanged herself. Ballinas was a judical police officer. The state subsequently ruled Burendia’s death as a suicide. Ballinas, the husband and alleged murdered, has since been promoted to unit chief in his town. Corruption and dysfunctional justice systems, as well as victim blaming make these cases almost impossible to prosecute. According to the Council of Hemispheric Affairs, in Mexico, “of the almost 50,000 women killed, only about 2,500 resulted in convictions.” This means that Mexican femicide cases have an impunity rate near 95 percent. These impunity rates are not exclusive to Mexico. Most Latin American countries see similar impunity rates for femicide cases. In Honduras, for example, the impunity rate spikes to 96 per cent while in Colombia, the rate remains at an average-for-the-region 90 per cent. Thousands of families are still waiting  for justice to be served, but in a country where the authorities and the government refuse to classify such offences as femicide, justice seems out of reach for femicide victims and their families.

The implications of using the word ‘femicide’ to label the crimes by authorities is very important.  When authorities refuse to lable the crimes as femicides, they demean the role that gender plays in the victim’s death.  Refusing to use the term is in effect refusing to address the underlying problems of Mexico’s machismo society, as well as stripping the implications of the crime as a gender-based hate crime. Furthermore, it normalizes the notion of gender-based violence. It is important to understand that femicides are not isolated events but they are part of a society that has institutionalized violence against women.

Authorities are also complicit in perpetuating the institutional violence that permits impunity for perpetrators. The justice system is already inaccessible, especially for low-income communities where the majority of the victims and their families come from. When women do have access to the justice system, they are met with incredulity or discrimination by authorities. Humberto Padgett, an investigative journalist and co-author of Las Muertas del Estado (The Deaths of the State), establishes that authorities are complacent to the attitude of victim blaming. They believe that women are murdered because their clothes are too revealing, they get romantically involved with the wrong man or because they worked in a place where prostitution was common. In effect, the authorities reproduce the gender stereotypes and norms that permit femicide in the first place. The message that authorities send to perpetrators is that they will be permissive to violence as they do not punish or prosecute the offences. With this attitude, authorities are directly complicit in facilitating violence against women.

The misogynistic attitude of authorities is framed by the context of rampant machismo in Mexico. Traditional cultural values support the idea of masculine authority and ownership over women which is reinforced through the justice system. For example, in Mexico, a woman cannot file domestic abuse charges unless her injuries take longer than 15 days to heal. The persistent culture of machismo clashes with the socio-economic development and advancement of women in the region. Latin American women are more educated, participate more in the traditional workforce, and are more likely to be involved in politics than any other developing region. Despite this, Latin Americans are less likely than people in other regions to say that women are treated with respect. As the societal structure is based on male dominance in any type of workplace, women who are challenging their traditional role and, in consequence, such structure, are seen to be a threat to the male dominion. As the workforce slowly becomes more feminized, some men feel as if their masculinity is being threatened by having to work alongside women.  The paradox between traditional gender roles and a growing educated, working female creates male entitlement that leads to misogyny. Male entitlement and misogyny are so entrenched and interconnected in society that it becomes a pervasive habit, one that may manifest seemingly innocuously with offhand comments and attitudes but could evolve to violence and murder.

By analysing the scene of the crime, one can observe the implications of such murders. Jessica Livingston, author of Murder in Juarez: Gender, Sexual Violence, and the Global Assembly Line, argues that the way these women die reveals the misogynistic attitude of the perpetrator. Abandonment of their bodies in desert unsanitary places like sewers while wrapped in garbage bags indicate that the perpetrators consider the women cheap and disposable. Bodies that show 20 to 30 bullet wounds, dismembered body parts and sexual assault also indicate hatred and disregard for female dignity which could stem back to anger at women for becoming more powerful and threatening the existing hierarchy. Women are seem as someone else’s property which is why violence committed by a spouse or a boyfriend is the most common case. In Honduras, for example, one of the most prominent cases was the murder of 2014’s Miss Honduras, María José Alvarado, and her sister, Sofia Trinidad Alvarado. Trinidad’s boyfriend murdered them both after a jealous fit because Sofia Trinidad danced with someone else at a party. Their mother, Teresa Muñoz, asserted that “because of his machismo that this happened. Here in Honduras, women aren’t worth anything.”

The institutional fragility of the status of women in Latin America makes addressing gendered violence extremely complex. In a place where machismo is the hegemonic model of masculinity, social acceptance of gendered violence becomes harder to combat. The issue then requires the attention not only from the government but also from civil groups and the overall citizenry. Change does not only require legislative reforms that prevent impunity and address female violence, but a change within society to purge itself from its machista tendencies. After the murder of Mara Castilla, outrage has exploded on social media and on the streets which are signs of progress. While change will not come tomorrow, Latin American women more educated, mobilized, and politically active as ever are ready to push for that change.