In Defense of IDS: A Reply to the McGill Daily 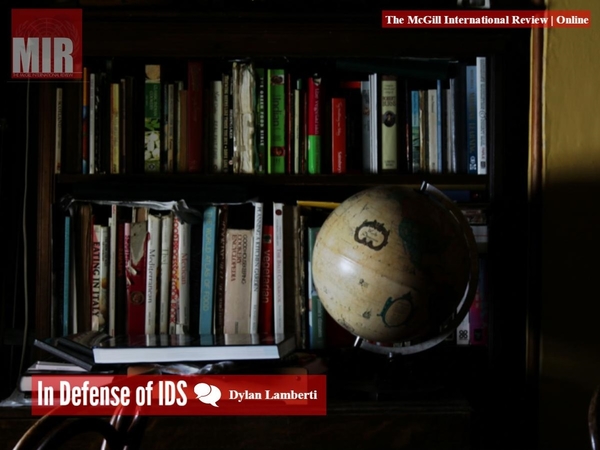 On October 17th, the McGill Daily published a feature article titled “Party on the Beach while Improving Healthcare in [Insert Country Here]!” While the article did raise some important issues about the field of development and IDS at McGill in particular, I did not find the representation of IDS fair. That is not to say that I think that their perspective is invalid, or that the problems that are pointed out are non-existent, but rather that my own experience with my IDS degree has been different, and I wish to offer a counter point of view in an attempt to draw a more holistic picture of IDS at McGill.

The article reads “within the program itself, there is barely any attempt to come to grips with the history and context of development work, or to understand what makes one country ‘developing’ and the other ‘developed.’ The very serious critiques of development work vocalized in the past two decades by activists and scholars are only conspicuous by their almost complete erasure from the program.”

My experience with IDS theory has been markedly different: critiques of development work were consistently articulated in many of my classes (SOCI 307 – Sociology of Globalization with Jose Nazif-Munoz, GEOG 408 – Geography of Development with Jon Unruh and ECON 313 – Economic Development 1 with Matthieu Chemin in particular). Not only were liberal-democratic (or ‘Western’) theories, morality codes and policies presented as problematic and harmful in their ignorance of local contexts, but the very presence of core nations’ development agencies overseas was discussed as a form of neocolonialism.

Further, I challenge the idea that IDS surrounds the study of “the…supposed failings of other countries” with “little attention paid to the failings of the Canadian state.”

While I do agree that most of the courses offered throughout the four streams of study are turned outwards, I believe that this has to do with the international nature of the discipline. IDS is designed to look at countries within a global context, in how they relate and influence themselves and each other in an incredibly complex web of politics, economics and many other fields.

Furthermore, examining specific issues in a country is not done through pointing out their “supposed failings,” but instead studying very real issues of food security, conflict or healthcare, all of which were addressed in specific case studies in my courses.

I also disagree with the allegation that “the IDS program is similarly silent when it comes to Indigenous issues in Canada,” as a number of courses spread throughout the four IDS streams do offer a critical look at the state of Canadian issues, such as CANS 315 – Indigenous Art and Culture, ENGL 440 – First Nations and Inuit Literature and Media, HIST 408 – Colonialism and Native Peoples and POLI 372 – Aboriginal Politics in Canada. These are only a few of the courses which focus on the issues surrounding Aboriginal and Indigenous populations in Canada: sensitive topics, like Canada’s residential school policies, are covered in depth.

That is not to say that a handful of courses provides an adequate picture of the issues facing Canada’s development on a domestic level, but that it is a stretch to accuse the IDS faculty of being silent on an issue that many professors and students care deeply about and is extremely relevant to current Canadian politics.

However, I do agree with the point that “those who are marginalized on the basis of ethnicity, gender, and disability, to name a few” are not adequately analyzed in most IDS courses. While specific case studies may make reference to racism and sexism in situational contexts, there lacks a broad theoretical framework to analyze development issues. A clearer discussion of the forms marginalization can take and the ways that it is implemented could only strengthen the study of power structures in the field.

Furthermore, I do agree with the fact that INTD 200 – Introduction to International Development does not provide a good critical foundation for students entering the program. However, I differ in that I believe that the program’s stream system is designed to focus your studies and begin to challenge the privilege and saviour complex that is exhibited by some (but by no means all) of those who choose to pursue an IDS degree. I would further argue that the survey and introductory courses that I’ve taken for my second major were just as weak at providing a high level of intellectual understanding of theories and issues – though admittedly English Literature is not as steeped in controversy as IDS is.

The point of survey courses is not to change your way of thinking, but instead to lay the groundwork of working in a university context. These courses cannot stand alone, nor are they designed to. Instead, they help you develop your research and writing skills, gain an extremely broad understanding of how the discipline works and then leave you to fill in the blanks in your further studies. It is through the courses that you choose later on in your academic career that you can begin to challenge the stereotypes and preconceptions that you hold.

“With the rise of IDS programs at schools across North America, development work is now being marketed as sexy and glamorous. The idea that each individual student in the program can go and ‘save the world’ with their McGill IDS degree in hand is constantly perpetuated.”

I don’t think that this is the case. If anything, my time studying international politics and global development has left me more cynical and unsure, questioning the world around me to a degree that is somewhat precocious but mostly disheartening – but that’s the point. When it comes to international development, or politics of any kind, being sure isn’t always possible. Things change, rapidly more often than not, and being critical of the world around you is the only way to develop some sort of understanding of it.

If you graduate from McGill with an IDS degree and still believe that developing countries are exceptional in their poverty, corruption and civil instability, you have failed to critically engage with your courses. Graduating with the belief that Africa is a continent of starving individuals who need to be “saved” by the West shows either a blissful ignorance of the topics covered in IDS courses, or a conscious choice to focus on specific humanitarian disasters and ignore the larger systemic issues of justice, equality of opportunity, global commodity chains and the history that perpetuate such disasters. In either case, it’s important to not conflate the failings of an individual with the failure of an entire academic discipline. For every IDS major that suffers from a “white saviour” complex, there are several others who have their global perspectives transformed and expanded through the process of critical reflection that IDS facilitates.

To be fair, I never pursued an internship or a position with one of the various volunteer agencies that works on campus, for much the same reasons that were explained in the article. Building a well or a school in a foreign country would take money away from local agencies that could instead do the job, and provide no long-term or proactive benefit. It’s a simple form of exploitation, in which I may be able to feel good about myself for doing something practical with my hands on the ground, while possibly keeping my head down and ignoring the larger neo-imperialist and theoretical issues that would surround me.

None of my friends in the program have pursued these programs either, and while the fact that I haven’t seen this problem doesn’t mean that it is non-existent, I find it hard to characterize an entire demographic at McGill as suffering from a white saviour complex when the majority of the people that I know in the discipline view such trips in the same way that I do.

My experience with IDS is going to be different from other students’. I am a straight, middle class white male, and I understand that by the simple virtue of the adjectives that I use to identify myself with, I enjoy a great deal of privilege in ways that I don’t always realize. However, I believe that my pursuit of an IDS major in addition to my English degree opened my eyes to that privilege in ways that wouldn’t be possible without the interdisciplinary nature of the degree. I understand the issue of the “white saviour” raised by the Daily, but I do not believe that such a complex should be the presumed intention of the majority of students who choose to study IDS. I did not choose this path because I wanted to travel, but because I am deeply interested in politics and how the world is structured. If I studied political science, I would not understand the economic underpinnings of the global system, and the pursuit of an economics degree would leave me severely lacking in the understanding of foreign cultures and sociological methods of norm distribution. The interdisciplinary nature of IDS allowed me to cultivate a worldview that is more holistic than could otherwise be accomplished.

That is not to say that the IDS degree offered by McGill is without fault, but that it does not create or sustain a naïve worldview, without nuance or consideration to the complexity of the issues that we study or the privilege that we enjoy. While there are undeniably some students of the discipline who do believe that “they have the authority to tell people from other countries how to ‘fix’ their societies,” as evidenced by the existence of on-campus volunteer organizations that push working and travelling in other nations in the form of working vacations, I do not think that the discipline is to blame or fundamentally exploitative.

Ultimately, the Daily’s article raises several fundamental and important questions regarding the way that international development is taught at McGill. These are questions that I and others in the programme have doubtlessly grappled with at some point during our studies, and it is for that reason that I felt it necessary to draft such a lengthy response. I hope that in doing so, I can start a discourse on campus regarding both the merits and failures of IDS as both an academic and professional field. I firmly believe that IDS is a unique and transformative major, and one that we are privileged to be able to study. This doesn’t mean, however, that we should be uncritical of our field of study, but we should be careful when drawing broad generalizations regarding the reasons for the popularity of the field, or the level of expertise that McGill professors hold on a particular subject.