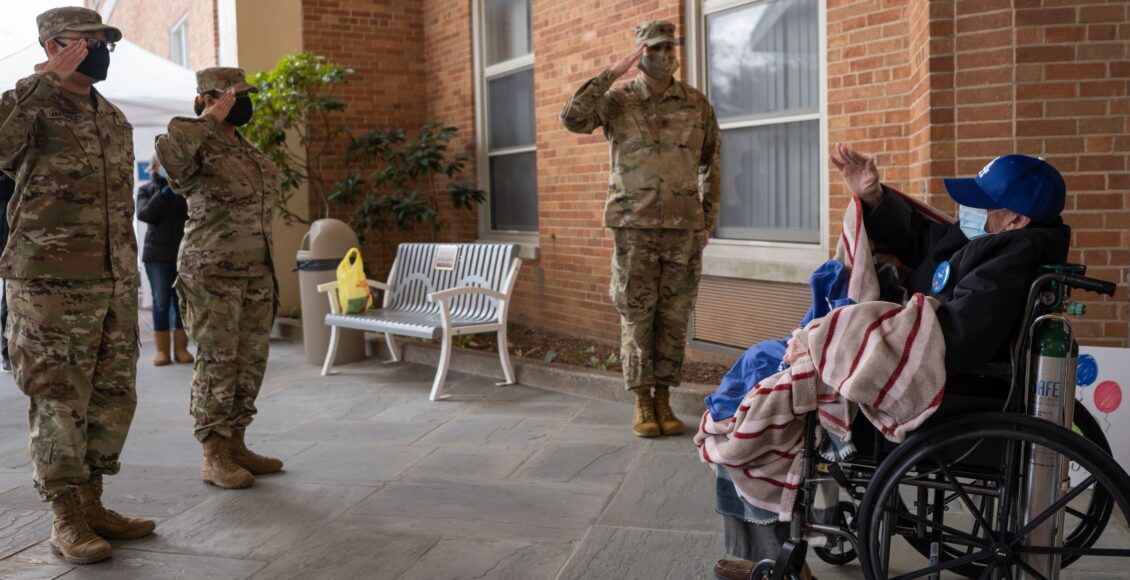 On my first day of work at a Montréal long-term care center in May of 2020., better known under the French acronym, CHSLD, I was greeted at the door by the Canadian Armed Forces, who had only arrived a few days earlier. I was sent there by CIUSSS-Ouest, the western board of the Integrated University Health and Social Services Centers, to assist the center following a severe COVID-19 outbreak. This military presence pointed to the severity of the situation and a last-minute effort to salvage the center after most efforts at COVID-19 prevention measures had been exhausted.

By the end of my first week, all the residents and nearly all regular staff had contracted the virus. The CHSLD was acutely understaffed, with a ratio of at least twenty residents to one auxiliary nurse. This prompted them to bring me and other students and volunteers to take the staff’s place, which proved to be a very challenging experience. I was responsible for monitoring, feeding, bathing, and caring for rooms of covid-positive residents after only receiving a brief training. This clearly indicated the desperation of the situation as the center would typically relegate these responsibilities to trained nursing professionals.

Every step of this experience was entirely new and challenging, as could be said for the top policymakers of Quebec’s Health and Social Services Ministry (MHSS), who had to adapt following the destabilizing effects of the pandemic. Most of the emergency workers I spoke to in that first week had come from Montreal Hospitals, which was strange considering hospitals should’ve had the greatest need for personnel amid the pandemic. However, public health officials had instructed medical specialists from hospitals across the island to suddenly direct their services to nursing homes. This scramble to fill the labour gap in nursing homes indicated the severe structural deficiencies within Quebec’s long-term care sector that were present well before the COVID-19 pandemic.

These shortcomings are not unique to Quebec, as the same weaknesses are apparent throughout Canada’s long-term care systems. A report by the Armed Forces last summer indicated the inhospitable and inhumane conditions found at long-term care facilities in Ontario. By June 2020, the Globe and Mail reported that 81 percent of all COVID deaths in Canada occurred among individuals living in long-term care facilities, far surpassing the global average. Even before this statistic was available, elderly people were known to be particularly susceptible to the virus. Despite the available medical knowledge, provincial governments were still slow to implement preventative methods and effectively manage the pandemic outbreak. As a country renowned for its healthcare system, this failure to protect Canada’s elderly population thus exposed the flawed long-term care health policies that have been ignored for years.

Long-term care from top to bottom

Each province has its own way of organizing long-term care — with some performing better than others. In Quebec’s MHSS system, long-term care is an “extended service” of the hospital. The MHSS’s centralization of all health and social services has dramatically benefited hospitals but has pushed long-term care to the system’s margins. The prolonged dependence on the healthcare system that comes with ageing contradicts the hospitals’ curative-focused mission. This implies that hospitals are in the business of healing and discharging patients efficiently, not caring for them with no end in sight. Centralization creates a rigid top-down management structure that prioritizes curative over preventive care of the elderly. This hyper-medicalized and hyper-centralized approach to healthcare policy enables hospitals to monopolize provincial budgets, leaving far less to long-term care facilities. By marginalizing long-term care to an extended service, the hospital can feel assured that it is accomplishing its mission.

The severe unpreparedness of long-term care during the pandemic is also due to its split management between the private sector and the public system. Over the last fifteen years, Quebec has increasingly contracted “external partners” to provide long-term care by buying up beds in private centers. The province’s privatization of long-term care was meant to reduce administrative costs such as bed shortages, long waiting lists, and low wages for workers. However, allowing for-profit firms to manage CHSLDs has only worsened these issues. This is because MHSS and its external partners are not actually “partners’ but somewhat transactional agents. Partners tend to share the investment risk and hold the same long-term goals in mind. However, when the public system purchases beds and fails to follow up on its standards, for-profit centers are likely to cut costs, depress wages, thereby reducing their quality of care. Thus, the public system can bail itself out of responsibility at the risk of poorer health outcomes for patients. A clear example of this is the Herron CHSLD, which was found criminally negligible for the deaths of 31 residents in one month due to COVID-19. Privatizing these facilities left them unsupervised, underinvested, and understaffed, leaving residents extremely vulnerable to the pandemic. With the elderly population expected to double in the next 20 years, underinvestment is an issue that needs to be resolved quickly. This could be addressed through expanded living spaces that aid in implementing social distancing protocols for the event of another pandemic. However, these investments may be unlikely in the short term.

Another significant policy area is the ethical framework used to construct policy on long-term care. The current framework is solely concerned with the fragility of the elderly population and does not recognize their vulnerability. Where fragility is the individual’s physical state that requires care, their vulnerability stems from the state of being in care. This distinction is evident as residents are naturally at the mercy of others, whether it’s their next of kin, caregivers, policymakers, and even politicians. In the previous election, only a handful of the 150+ residents at my center voted, with most unable to due to their physical and mental incapacities. Therefore, much of the political debates and conversations surrounding long-term care policy do not involve the people for whom they are applied. Even before the pandemic, their isolation from the outside world, exacerbated by mental health struggles, creates an especially vulnerable condition. In the Ontario nursing homes commission that followed the CAFs damning report, many “person-centred” models were encouraged to recognize vulnerability in care administration. Such structural modifications like reducing unit sizes to 10-15 from 30-40 would make facilities feel more like homes than semi-hospitals. Less staff turnover and assigned residents would also foster closer relationships between residents, caregivers, and families. Furthermore, participatory management would prompt the inclusion of residents and more multi-dimensional approaches to long-term care. By expanding our definition of care beyond solely curative conventions, we effectively increase our healthcare system’s “capacity for care.”

A panel of mainly medical doctors drafted the MHSS’ COVID-19 triage directives for CHSLDs, excluding long-term care professionals. These policies have failed to address the elderly population’s vulnerability and actually worsened it in some cases. For instance, the extended ban of family visitors in CHSLDs has severely affected the residents’ mental health and well-being. In the CHSLD I worked at, the center still prohibited visitors even after 300 days without any positive COVID cases reported. The slow response to re-open visitation further highlighted a lack of coordination between local management, the CIUSSS, and the MHSS regarding COVID protocols and the prevalence of “top-down” directives from the MHSS. However, after months passed, the chaos of the initial wave had subsided, and residents could finally see outside of their rooms. The frantic footsteps of the orderlies in PPE were replaced by wheelchairs roaming the halls. However, evidence indicating the impact of the pandemic was everywhere. A third of the resident population at my CHSLD passed away from the virus, primarily due to underinvestment, under supervision, and poor communication from top administration.

Considering the tumultuous effects of the COVID-19 pandemic, the need to overhaul and strengthen Canada’s public healthcare system has been salient. More recently, the rapid spread of the COVID-19 Omicron variant has raised more questions about the provincial government’s lack of investment in adequate long-term care staffing as policymakers have mandated certain workers who tested positive to continue working. Such measures do not address the fundamental issue of long-term care facilities whereby the focus remains on physical fragilities, and the persistent vulnerability of people in the system is overlooked. This could be effectively resolved by ensuring that public health does not come at the cost of the elderly maintaining ties with their community.

Quality long-term care should be a collaborative effort that involves all parties: the residents, their caregivers, the community, family members, and management. The decision to cut off family relationships was necessary to save lives, knowing it came at the cost of vital lifelines for residents. However, the re-integration of residents back into society through their familial connections and recreational resources should have been better planned for and communicated. Instead, families received minimal and often vague information on plans for re-entry into CHSLDs, further endangering the centers’ ties to their communities. A coordinated shift from a curative-centred model of care to a person-centred one would be the most effective way to enable more significant investment in recreational therapy, mental health support services and support community resiliency during times of crisis.

Featured image: Members of the New York National Guard visit a nursing home resident in December 2020 by The National Guard is licensed under CC BY-NC 2.0.