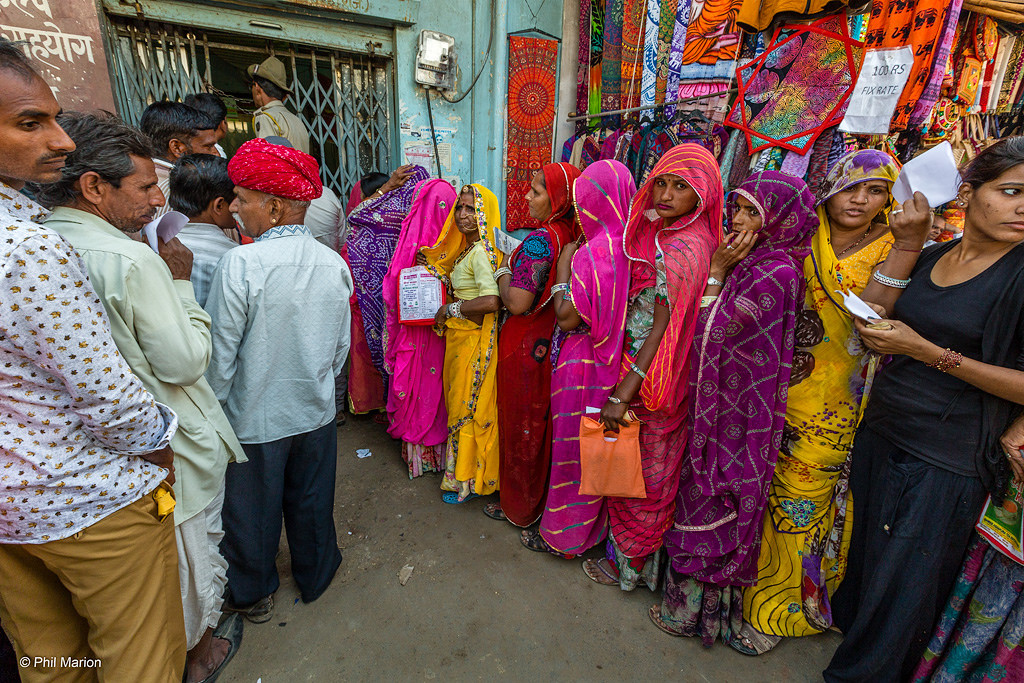 On November 8, 2016, India’s Prime Minister Narendra Modi announced that 500- and 1000- rupee notes, which make up 86% of the cash in circulation in India, are being made illegal. This decision sent the printing press into overdrive, inflating the value of secret piles of wealth. The policy worked in shrinking the shadow economy. This enabled the government to work the newly created money into tax breaks and public work schemes. PM Modi’s announcement brought about some strong reactions from the Indian people. Inflation would affect everyone who holds cash irrespective of its legality. Most of the people involved in black money transactions are insulated from the massive inconvenience being caused by the demonetization policy. Much of their wealth is not held in cash but in property, gold or jewelry. Close to a third of business in India is done using black money. Since India has a heavily regulated economy, businesses frequently bribe government officials into giving them licenses and other approvals. Government officials invest much of this money in real estate, which allows them to understate the amount they actually paid. Therefore, the property is purchased with black money but the sellers pay less tax than they should because the prices have been understated. Routine transactions are also carried off the books to avoid paying taxes. Black money is a big problem for the country as it keeps money out of the banks where it could be lent to others. The very people who have to face the inconvenience of demonetization are also deeply troubled by the problem of black money. The unaccounted cash can help businesses grow and drive economic growth. Black money also reduces the taxes collected by the government and hampers the maintenance of public services. From the pot holes on the road to the broken streetlights on the road are all maintained through tax money.

Such a heavy-handed measure can have multiple negative outcomes: it could undermine the credibility of government institutions, it could cultivate the fear that this type of policy might be implemented again which could weaken the confidence in the currency as store value – paving the way for broader institutional failure like hyperinflation, and it could threaten the long run trust in the judgment of the state. Indians have until the year-end to swap out their obsolete bills.

Despite all these problems should we dismiss this policy as a failure? Have we paid enough attention to the benefits that the demonetization policy will bring? Why do we always want quick results? It is not rational or fair to assume that the decades old problem of black money or unaccounted cash can be solved overnight without a little inconvenience? As a country, which is both deeply troubled by the problem of black money and is also distraught by the inconvenience caused by demonetization, it should contemplate if the problem of black money outweighs the short-term inconvenience of demonetization. Mr. Modi’s motivation was demonetization was to improve the functioning of the economy and boost its tax take by cracking down on the shadow economy. Economists estimate that India’s black economy accounts for about 20 percent of the GDP. Such illegal activity shields the fortunes from taxation and allows corruption to flourish. This is not to say that the government has not tried safer options to tackle the black money problem. But past efforts such as tax amenities had little effect. The demonetization policy forces the citizens to face the issue of black money and unite in solving it. Indians have to show the paperwork accounting for their cash piles while swapping their hoards of useless bills for useful ones. Those who cannot present the paperwork will receive attention from the government. Another benefit from the implementation of this policy is the increased use of electronic and bank based systems instead of cash transactions. This will make record keeping easier and widely used, which will allow the government to better track and tax the proceeds. The demonetization policy is a step towards the future while also addressing the problem of black money.

Another big worry expressed by the critics of demonetization is that people will just destroy the currency they can’t swap. However, the Modi government might have thought of a way to account for that. Money is a liability of the central bank – a debt. In most modern economies that debt sits on its balance sheet, and is offset, on the asset side, by holdings of securities like government bonds. Therefore, old and unreturned notes, if are recognized as cancelled liabilities, would create a huge positive asset position on the central bank’s balance sheet. The Reserve Bank of India could create a new currency liability, that is print money, and transfer that money to the government to spend. Economists hope the money will be recycled back into the economy through a fiscal stimulus, which might help soothe some of the caused by demonetization.

However, if the government allows Indians to redeem the outlawed notes for legal ones indefinitely then RBI might not recognize cancelled liabilities on its balance sheet. At the same time, Indians have been taking part in the demonetization policy in huge numbers. Of the 14 trillion rupees invalidated by demonetization, an estimated 8.5 trillion rupees have already been deposited. Credit Suisse has estimated that as much as 3 trillion rupees could remain unaccounted for as a potential government windfall.

This policy is without a doubt a big inconvenience to the people. As estimated 90 to 98 percent of all transactions in India take in place in cash then taking out 86 percent of all cash out of circulation could be a matter of life and death for some people. A 70-year-old man died standing in a queue outside the bank in Maharastra’s Nanded district. A lot of other people died either due to shock or due to shortage of money. The cash shortage has been particularly hard on impoverished Indians, many of whom don’t have bank accounts. A lot of them earn money on a daily basis, which leaves no time to stand in line at the ATM. Many of them are scared of losing their savings because of their mistrust of the financial institutions and concern for being harassed about the source of their cash. In a nutshell, the policy is poorly implemented. The government did not plan for the extreme consequences of the policy.

However, there is a big difference in not planning for the consequences and considering the extreme consequences as collateral damage. It is highly unlikely that the government did not take account every possible outcome of the policy. Such a huge policy was not debated over a cup of chai and then announced the day after. The Modi administration must have weighed the short-term pitfalls with the long-term benefits. The success or failure of the policy depends on the amount of unaccounted cash returned to the system after the implementation of the policy. The cash could come back to the banking system in the form of voluntary deposits or through tax checks on the evaders. If the black money hoarders do return the money, the tax and penalty will be around 50 percent plus 25 percent of the deposits. If they get caught then they will have to pay a penalty of 85 percent. The policy should inflict enough pain on the tax avoiders so that they change their behavior. If people are motivated to keep their money in the banks then more of it will be available for lending and people will get in the habit of paying the taxes. Ending the problem of black money requires an aggressive approve. It has to end the problem of endemic bribery that is deeply intertwined with the system.

There is a desire in people to see quick results. However, with every government policy the participation of people becomes very important. The only way for this policy to be a success is for the citizens to show their full cooperation. PM Modi referred to the inconvenience in his policy announcement speech on November 8, 2016. Since the policy has already been implemented the best course of action is to trust the government and make them aware of the inconvenience faced by the people. Every Indian wants to see their country change for the better. They want better public service and economic growth. For a long time now, Indians have wanted a leader who takes big and bold steps to solve the major issues facing the country. Then lets ask ourselves if we are too quick in dismissing the demonetization policy because it is causing inconvenience?