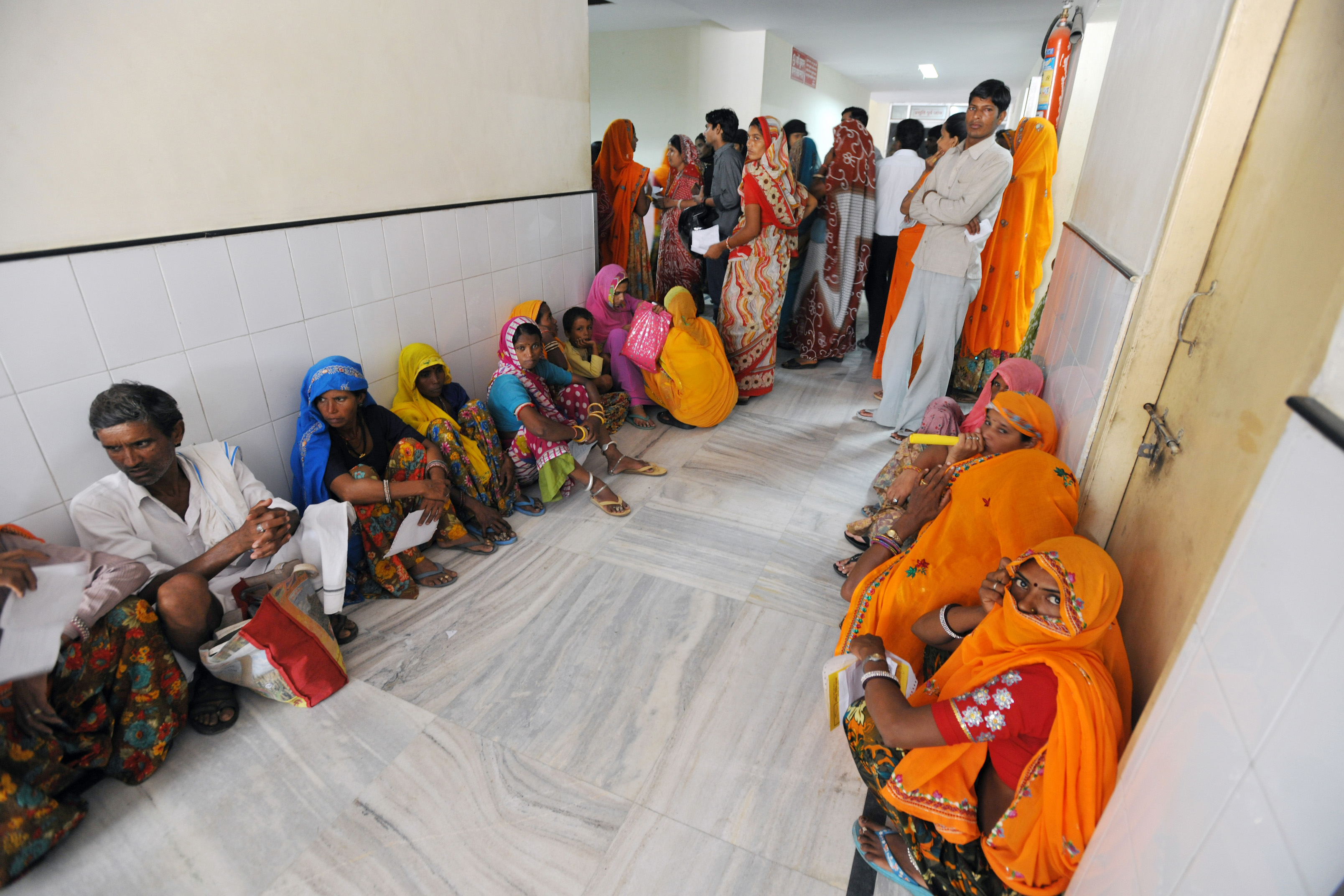 Recent months of this year have revealed a grim reality of the Indian healthcare system. In August and September of 2017, two major scandals involved the death of infants and children, due to the lack of appropriate healthcare, or neonatal conditions. In Gorakhpur, 61 children died in 3 days on account of encephalitis. In Farrukhabad 49 infants died in a month due to a lack of oxygen. With both cities located in Uttar Pradesh, India’s most populous state, these incidents have highlighted some of the issues that plague the country’s public healthcare system. India seems to be struggling with providing equitable healthcare for its people. The stark disparity between rural and urban modes of living also brings light to the issue of accessibility to healthcare.  Thus, many question India’s ability to provide adequate healthcare for its people – a right guaranteed in its Constitution.

With the country known for its large cultural and linguistic diversity, as well as its inequality, it comes as no surprise to many that Indian states differ vastly in terms of access, as well as the quality of healthcare provided within them. Access to healthcare differs vastly from state to state, as well as the quality of healthcare provided within them. This intra-state inequality is reflected in many of the state’s health indicators. For instance, Uttar Pradesh has as an under-five mortality rate of 64 per 1000 live births, comparable to that of Mozambique, while the Southern Indian state of Kerala has a phenomenal under-five mortality rate comparable to that of the United States. The figures for life expectancy are similarly disparate. Kerala has a life expectancy of 74, while the Central Indian State of Madhya Pradesh has a life expectancy of just 58. Interestingly, these patterns in healthcare mimic the patterns of wider wealth distribution and development in the country. Uttar Pradesh and Bihar scored the worst in terms of GDP per capita with figures of $2,853 and $2,456 respectively (USD PPP). On the other hand, Kerala and Tamil Nadu have per capita GDP’s  of $8,869 and $8,172, equivalent to that of the much more developed countries of Ukraine and Fiji.

Another issue for the integrity of the Indian healthcare system is rural-urban inequality with regards to healthcare provision. According to the 2016 statistics, 67% of Indians live in rural areas. This population distribution is problematic considering access to healthcare in rural India tends to be significantly more difficult than in urban areas. Many rural communities are located far from healthcare centres. Proximity to hospitals is important because long distances often amounts to lost wages. Additionally, rural healthcare centres tend to be publicly funded ones, which are more often than not, underfunded and overcrowded. A 2013 study found that the urban population in India has access to 66% of the hospital beds in the country, while the rural majority is left with the remaining ones, while unable to afford expensive private health care. Hence, this insufficient access to healthcare hits the lower socioeconomic segments of the population the hardest.

Of the issues underlying the public healthcare system, doctor shortfall is one of the largest. With a current doctor patient ratio of 1:1,674, India faces a total deficit of 500,000 doctors according to the World Health Organisation (WHO) standard of 1 doctor to 1000 people. Dearth of doctors is primarily observed in India’s poorer states of Bihar, Uttar Pradesh, Madhya Pradesh and Rajasthan. These states have a combined population of 445.1 million, but are home to only a total of 13.1 percent of the countries doctors. Moreover, Maharashtra, Karnataka, Tamil Nadu and Andhra Pradesh have 46% of all registered doctors in the country, despite much lower populations. It is estimated this shortfall may be even more dire since these statistics do not account the for Brain Drain phenomenon, which redirects many of India’s most qualified professionals to more lucrative jobs abroad.  With India’s population still rapidly growing, Brain Drain may pose a severe health challenge in the future.

Due to numerous deficiencies in the public healthcare system, their private counterpart has emerged as one of the largest industries in the country. Private spending constitutes approximately 70% of the health care spending in India. As a result, standards in private healthcare are far more superior to the overburdened public ones. In fact, lower costs and higher standards found in the private system compel foreigners to use India’s expertise in healthcare. However the private system also has several unique pitfalls of its own. Due to the largely unregulated nature of private practices, there have been numerous instances of clinics burdening uneducated and ill informed patients with unnecessary procedures for profit purposes. Furthermore, news agencies have reported instances where hospitals have stolen infants for human trafficking. Despite these incidents, it is generally accepted that the quality of healthcare one receives in the Indian private sector is by far better than the public sector.

Earlier this year, Prime Minister Narendra Modi finally unveiled his plan for healthcare reform. Modi intends to firstly, increase public spending on health to 2.5% of GDP. However, individual states still have more jurisdiction than the federal government over their state’s healthcare budget. Secondly, much of the new health policy is focused on making healthcare more affordable. An example of such an endeavour is the Pradhan Mantri Bhartiya Janaushadhi Pariyojana, which aims to provide generic drugs in stores throughout India to lessen the burden that medication costs have on the lower income population. The President of the Public Health Foundation of India, K Srinath Reddy argues that expanding institutional capacity precedes Modi’s policies if they are to be effective. Thirdly, the number of MD programs across the country is to rise which would primarily tackle the shortage in physicians. Lastly, Modi is introducing a number of policies which look to prevent the spread of diseases from the onset, with initiatives like Clean India (Swachh Bharat Abhiyan). This sanitation initiative should help decrease the spread of infectious diseases like Malaria and Dengue, which are still rampant around the country. Given these policies’ recent implementation, their impact is yet to be seen.

A major proportion of the efforts to provide equitable healthcare in India is led by civil society. The privately owned Narayana Hrudayalaya hospital chain is one such initiative. They aim to increase availability of speciality care for all Indians through a type of wealth distribution scheme. Narayana Health subsidizes operations for poorer patients by using the funds recovered from wealthier ones. They calculate how many paying patients would be needed on a daily basis to subsidize the ones that cannot afford expensive healthcare using software technology and algorithms specifically designed for this purpose. Several NGOs are adopting similar programs aimed at increasing access to healthcare for those too far to access it. For instance, the NGO Smile On Wheels provides mobile health care for those in isolated areas. However, NGOs working in the health field require more funding for appropriate equipment and medication. Thus, the  extent to which NGOs can affect real change through such projects is limited. Macro level change needs to stem from government reform for NGOs to reach their full potential.

Numerous community-based health initiatives have also been trialled by several institutions across the country. Using randomized trials and statistical analysis of an intervention’s costs/benefits, effective interventions and their policy implications can be found. One such study published by The BMJ sought to assess the impact that different immunization projects have on child immunization in rural Rajasthan. Through the use of 3 different village groupings – one with immunization projects without incentivisation, one with incentivization, and one control group, it was found that minimal incentivisation (such as provision of lentils in exchange for immunization) can have a positive tangible impact on immunization rates. Such studies have important implications, and aid the policymaking process greatly. Findings brought forward by the epistemic community should be considered by government officials in designing health policy.

However such interventions are not always so easy to conduct. Another similar randomised healthcare project conducted in Karnataka looked to assess the impact that the Rashtriya Swasthya Bima Yojana, a government-run health insurance programme, had on the rural poor. The results were apparently difficult to assess because the number of people included in the programme had not been registered properly. Moreover, the study found that rather prosperous households were listed under the programme instead of the poorer ones in the village. These findings highlight the problem that such interventions often face in India; local politics and power dynamics often determine who receives access to health services.

Remedying Healthcare through a Development Paradigm

The incidents earlier this year in Gorakhpur and Farrukhabad, illustrate the classic patterns of deficiency found within the Indian healthcare system. Overburdened and underfunded hospitals, located in states with poor development are expected to look after too large of a population. Poor trust in the public health sector has led in-part to the rapid expansion of the profiteering private one. Furthermore, the rife economic inequality in the country has created a situation in which health outcomes differ greatly from state to state.

Moving forward, the government must find an effective solution to the doctor shortfall problem, especially in its northern rural heartland. Assessing the policy implications of randomized health interventions would provide the government with good practical and theoretical framework to move forward, while allowing it to tailor interventions to communities. Lastly, India must address its underlying economic inequality for the healthcare system to truly transform. Until the Indian government finds effective ways to develop its laggard states, its is likely that healthcare will continue to underperform, much to the detriment of India’s population.