Insight into a Humanitarian Crisis: The Ebola Outbreak 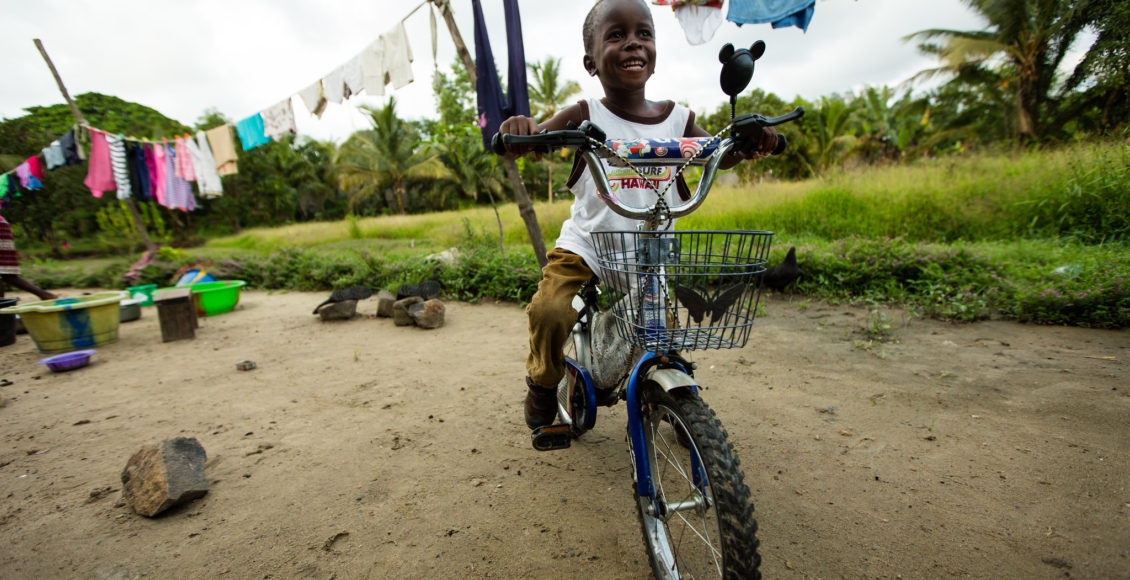 Monrovia, Liberia - October 19, 2014: Patrick Poopei shows off his new bike donated to him by Doctors Without Borders. Footage by Morgana Wingard
Share
Advertisement

West Africa entered the world stage in March of 2014 with the deadly outbreak of Ebola virus disease, or EVD. The scope of the virus was greatly underestimated and the international community heavily invested in the containment, prevention, and eradication of the outbreak. For those removed from the issue, such investment hardly impacted daily life because geographical separation directly correlated to experiential detachment. Meaning, for people outside the physical area of the outbreak, the difficulties and repercussions of the epidemic were difficult to comprehend on a personal level. Across West Africa, the death toll rose to over 11,000 (CDC), which was heavily concentrated in three countries: Sierra Leone, Guinea, and Liberia. As of September 22, 2015, a total of 28,319 cases have been reported with 15,235 being laboratory confirmed. A quick statistical analysis will reveal that a large percentage of those who contracted Ebola survived (around thirty percent). A percentage poorly relates the psychological impact of the epidemic on affected populations and makes it difficult for observers to shift from objectively interpreting data to sympathetically understanding the strife of the population. The scope of the virus did, however, enter the attention of the Western hemisphere with an inescapable pandemonium of panicked rumors and apocalyptic premonitions. Two US doctors were, in fact, confirmed to have contracted the virus and carried it into the country (CDC). There was a swift reaction to treat and contain the virus, which prevented its spread. However, news media sensationalized the humanitarian disaster, hoping to spark individuals’ interests with a bleak outlook on the future of the international community. Beyond the media, virologists like Michael Osterholm, director of the Center for Infectious Disease Research and Policy at the University of Minnesota voiced concern over viral mutation causing an array of insurmountable challenges, such as airborne transmission (Rettner). Experiences of those directly affected were greatly masked due to the unforeseen outbreak of the virus, which overwhelmed the states’ and global community’s resources, and, in turn, promoted a frenzied international response.

Successive months of sensational news caused those who were not directly affected to filter their attention towards other issues. As the outbreak raged on, interest occasionally flared-up related to the latest death toll calculation or popular hypotheses. Typically, however, information was seen as just that, statistics, facts, news, there was no humanity involved. An estimated death toll upwards of eleven thousand was seen as little more than a number, insignificant to the immediate concerns of those separated from the virus by an ocean or territorial boundary. Familial fragmentation, cultural practices preventing containment measures, ignorance, debilitating poverty, crippled health care systems, excommunication by fearful communities, and a severely disproportional doctor-to-patient ratio (for example, 51 doctors were responsible for Liberia’s population of 4.4 million in August 2014) was deeply concerning, heartbreaking even (DaMina Advisors). Nonetheless, few did more than donate to a notable, well-advertised NGO, such as the International Federation of the Red Cross and Red Crescent Societies or Doctors Without Borders. That’s not to say that those separated from the matter are insensitive, unsympathetic, or especially ignorant. It simply highlights the fact that issues within one’s life are prioritized above those over which one has no control. Realistically, how are we, the community, and the world (specifically the general population incapable of altering the situation) to react? Can one attempt to pursue all global issues that arise? That involves research, time, raising awareness, fundraising, volunteers, support, donations, connections, etc, if one attempts to make a lasting impact, while the potential for failure remains. There is little motivation to engage in such behavior, clearly. It’s simpler to remain comfortably distant and trust, although sometimes apprehensively, that there are qualified individuals adequately reacting to the situation.

In this situation the qualified individuals were found at the United Nations. An emergency committee called UNMEER, the United Nations Mission for Ebola Emergency Response, was initiated by the General assembly during the sixty-ninth session in September 2014 to respond specifically to the Ebola outbreak. The Security Council also urged the international community to lift travel bans and promoted international cooperation in order to facilitate efficient containment of the virus.

The global response to the humanitarian disaster, while being delayed, displays an understanding of the scope of the outbreak. Medical personnel and supplies along with a re-evaluation of public policy aimed towards containing Ebola and preventing similar outbreaks, were provided by both state and non-state actors, such as NGO’s and private donors. The immediate issue of contagion was eventually effectively dealt with, but a year after the peak of the outbreak, West Africans are expected to have completely readjusted to their lives. It is impossible to imagine the scarring effects of watching one’s neighbors, friends, and family waste away into nothingness at the hands of an often unknown predator (EVD may have been foreign to many areas due to the symptomatic similarities with other sicknesses, a general lack of education, or isolation) (IFRC). In secluded, tribal areas, other factors, such as foreign intervention, would, understandably, have been disconcerting. With waves of rumors, explaining factors such as the source of the virus, cures, homeopathic remedies, religious solutions, and so on, unfamiliar personnel in lab gear entering a remote community created an additional unknown to acknowledge. One cannot discount the experience of those in more developed areas as well. Even with greater education and access to consistently updated information, the possibility for contagion could not be ignored. Travel bans, political upheaval, and economic strain, while typically beyond individuals’ circadian concerns, contributed to people’s mental burden as the factors oppressed all facets of affected states’ political systems.

People within areas affected by Ebola are, understandably, traumatized. For many of us on the outside, the virus lost our interest long ago, but many are still healing from the shock. Liberia was confirmed for a second time forty two days free of EVD on September third (Miles). The threat of reintroduction is palpable for numerous West Africans and because of this, survivors face a great deal of stigma in many areas. In Sierra Leone, a young, university student named Erison Turay who now leads a survivors soccer team, lost thirty eight family members (Soloman).  He and his mother, who also contracted EVD, were the sole survivors and are responsible for caring for their fifteen orphaned nieces and nephews. His story is featured in a New York Times documentary Erison and the Ebola Soccer Survivors.

Those who survived the outbreak are blighted with a seemingly irreversible label that marks them as previously infected and to be avoided. Turay’s experience, like many survivors, mimics that of the AIDS epidemic that began in the 1980s (See Ebola’s Lessons: How the WHO Mishandled the Crisis). In both situations, the public outwardly rejected sufferers and stigmatized the diseases. Correlating these viral surges allows those separated from effected areas to develop a better understanding of West Africa’s experience during and after the Ebola outbreak.

Individuals like Erison and his mother are the reason we, as onlookers from distant lands, must consider events beyond the United Nations resolutions and throng of news reports. Broadcasts and articles cannot express the strife individuals experience, nor can they adequately describe how the mélange of cultural beliefs, political upheaval, fear, and other related factors affect the core of human existence. Information like a death toll represents more than a statistic. It represents lost family members, friends, neighbors, and leaders to those who remain. International intervention reveals a concerted effort by outside forces to aid another representative body in its often failing battle to save its people. In this sense, the government is an entity comprised of people just like those subject to their jurisdiction; beings who are also susceptible to fear and inexperience. Although it is difficult to filter through sensational media coverage, it is important to remember that those directly by disasters, such as that of the Ebola outbreak, perceive the crisis on a personal level. The international community is often interested in intervention for the purpose of self-preservation or image, but a greater focus on those directly involved will expose massive gaps in the efficacy of global involvement. The vast amount of individuals in situations similar to Erison Turay’s, must bear the residual effects of the virus (psychologically and within the community) regardless of whether the media covered their struggles. Considering facets of an epidemic beyond that of what is publicized and delving into what can be understood of the human experience allows everyone, whether involved or separated, to connect on a subjective level. When one can connect to an issue, or when one invests in a cause, legitimate, sustainable advancements will ensue.

The featured image “Ebola survivor Patrick Poopei of Liberia shows off his new bike” by Morgana Wingard is licensed under CC BY 2.0.