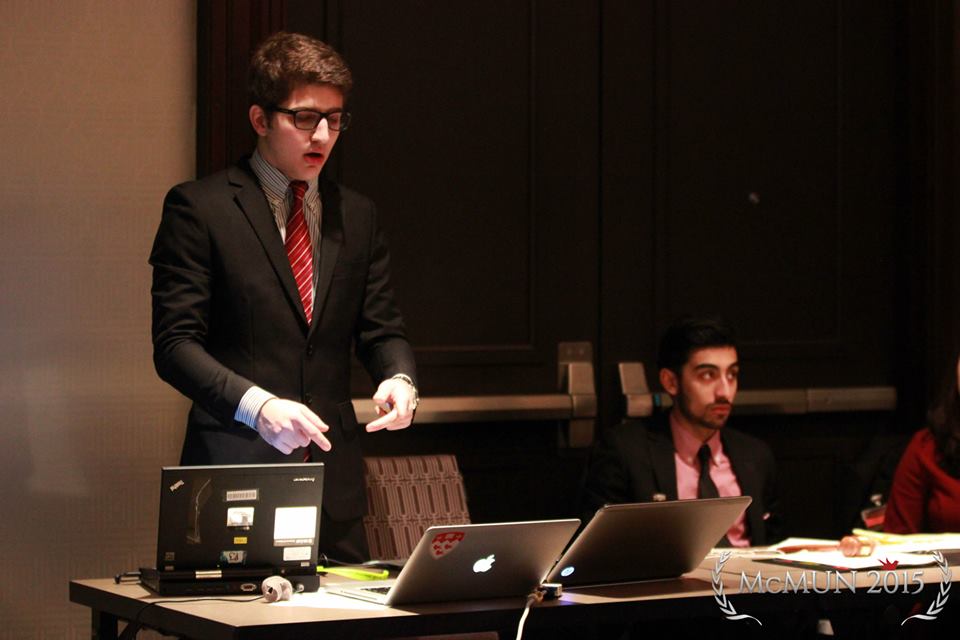 On January 23rd, Committee Chair Richad Hirani and Vice-Chairs Dina Eraksan, Praniet Chopra, and Yifan Liu oversaw the first day of the International Criminal Court Committee, the only McMUN mock trial committee. The committee, consisting of approximately two dozen delegates, examined the civil war in Libya following the 2011 Arab Spring, more particularly on the two court cases related to this conflict. The first case pertained to the trial of Saif al-Islam Gaddafi, the son of former Libyan dictator Muammar Gaddafi, and his involvement with his father’s killing of civilian protesters during the civil war. The second case involved the trial of a current head of the UK Trade and Investment Defence and Security Organization who, despite being a foreigner to the Libyan civil war, was accused of committing crimes against international law due to his communication with companies that exported weapons of war to the Libyan regime during Muammar Gaddafi’s reign.

The interrogation of witnesses at the stand proved slow on the first day. “We’re not that far into the case. The delegates are super intelligent, so they bring up a lot of points. We’re only on our second witness out of the eight, but people are definitely getting a lot out of it,” reflected Isadora, a delegate representing one of the eight witnesses to the first case.

Hirani was also positive about the trial’s slow progression. “I think it’s a testament to how well it’s going. The fact that it’s so slow [actually] shows that the delegates are intrigued by the committee, and that everyone has a chance to speak and interrogate the witnesses. It’s unfortunate that we haven’t gotten to our second case yet, but the delegates are actually enjoying the committee,” he said to the MIR.

Following the opening statements of the delegates representing the defence and prosecuting attorneys of the eighteen Rome Statute-signatory countries, the mock chamber began to hear the testimonies of two of the prosecution’s witnesses: a delegate representing Ahmed al-Jehani, the brother-in-law and Chief of Intelligence of Muammar Gaddafi, and another representing Said Gaddafi’s chef during his imprisonment. Attorneys from the opposing sides took turns interrogating these witnesses.

As Muammar Gaddafi was known for appointing family members to high-ranking military and political positions and Jehani, his brother-in-law, had been hired as his Chief of Military. The prosecuting attorneys from the United States, the United Kingdom, Brazil, Argentina, Japan, Lebanon, Turkey, and the Netherlands took lengths to suggest Jehani’s intimate knowledge of Said and Muammar Gaddafi’s plans and Said’s complicity in the killings of Libyan civilians. Questions posed to Jehani ranged from his knowledge of weapons used by Gaddafi’s militias on civilians, those claimed to be enemies of the regime, to questions concerning his relationship with Gaddafi.

Despite being Muammar Gaddafi’s brother-in-law and a member of his inner circle, Jehani claimed to have no such personal relationship with him that would have permitted him to know about Muammar and Said Gadaffi’s plans and undertakings.

On the other hand, in their cross-examination of Jehani, the defence attorneys of South Africa, Canada, France, Kenya, Uganda, Australia, Mali, Egypt, and Malaysia focused on asking questions related to his awareness of the armament of civilians and the types of attacks launched at them, as well as of Saif Gaddafi’s military orders. In fact, Jehani admitted that he knew that Saif had personally ordered his mercenaries to attack civilians.

The interrogation of Saif’s chef consisted of a completely different line of questioning. As Saif regularly confided in the chef during his imprisonment, the prosecution sought to extract personal details on Saif and his ideals and principles, notably similar to his father’s treatment of opponents to his regime and his inclinations towards using non-peaceful means against them. The chef stated that the Gaddafi family has same mindset and that he “believed Saif would have helped his family out if they needed his help.”

The defence’s questions also took on a more personal flavour than those posed to Jehani; the attorneys insisted on knowing Said’s true intentions –  whether or not he actively sought to hurt the rebels opposed to his father’s reign, and his goals post-Arab Spring for the Libyan regime.

“I’m just really excited to see the outcome of the trial. The debate has been super strong so far,” Isadora commented to the MIR. The MIR will be keeping a watchful eye out on the results of this trial to determine if the presiding judge decides that Saif Gaddafi is guilty of war crimes under international law in this committee.