Interview with Michael Chong: The Candidate for the Conservative Party Leadership On Kellie Leitch, Nationalism and the Normalization of Hate 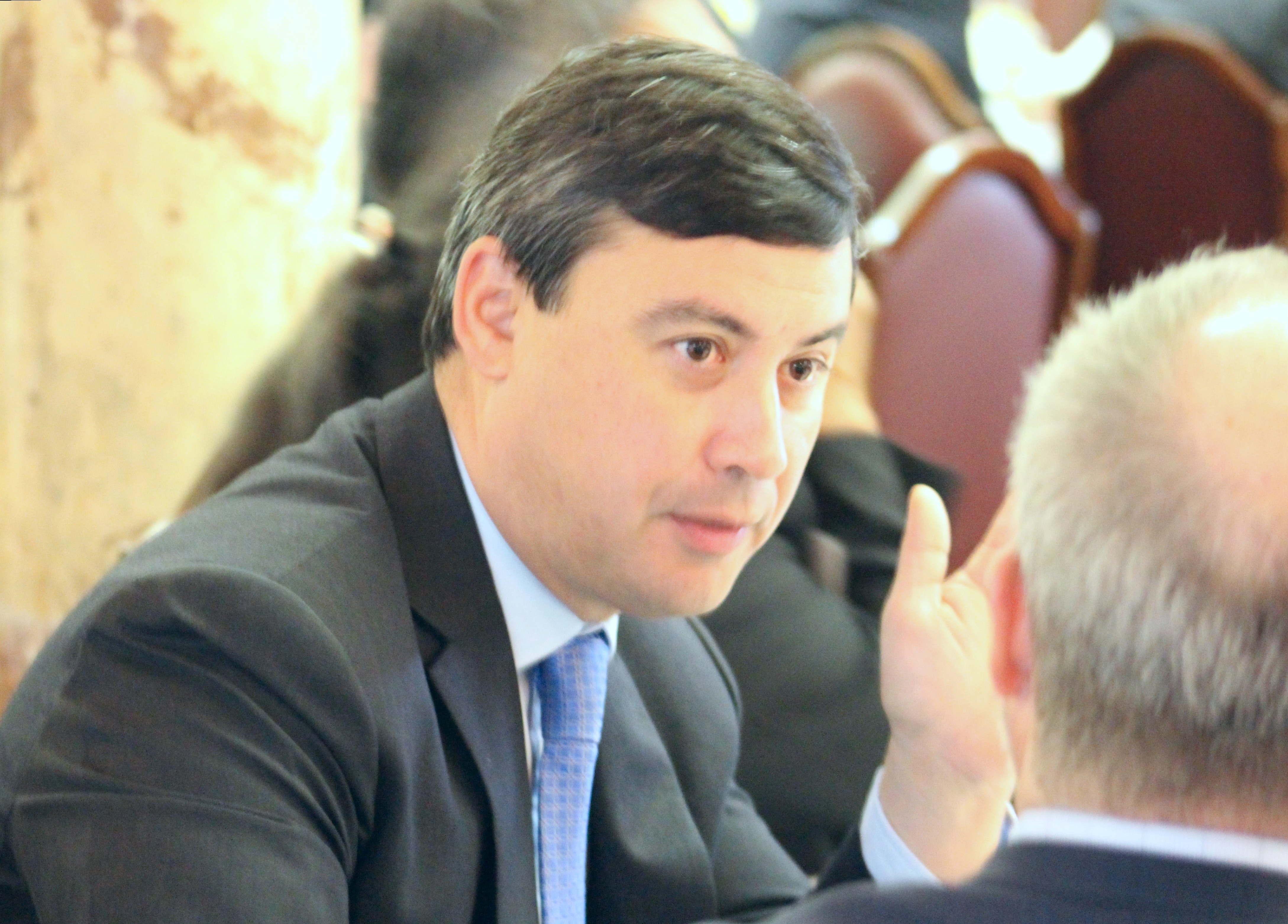 During a recent meet-and-greet in downtown Montréal, Mr. Chong agreed to speak with me on several pertinent questions pervading this campaign for leadership of the Conservative Party of Canada (CPC). Chong has never hesitated to criticise the weaknesses of his conservative colleagues, notably in underlining the importance of a more inclusive federal party that welcomes both immigrants and young people: “We need to build a much bigger conservative party that includes people from all races, religions and creeds, and we need to recruit youth and a new generation of party candidates in ridings that are more diverse. I represent that new diverse generation of Conservatives.” The MP from Ontario’s Wellington-Halton Hills, Chong has developed his platform around three fundamental and concurrent principles: economic opportunity, environmental opportunity and democratic opportunity. This transcribed interview has been slightly modified for clarity. The original audio recording can be found below.

Update: Since our interview just a few weeks ago, many of the issues Chong highlighted have become increasingly salient. This past week in Parliament, he once again stood out amongst the 14 Conservative leadership candidates in condemning the links between hateful rhetoric and the troubling rise in hate crimes against Canada’s Muslim community, this time by pledging to vote for Liberal MP Irqa Khalid’s (Mississauga-Erin Mills) Motion 103 condemning Islamophobia and “all forms of systemic racism, religious intolerance, and discrimination of Muslims, Jews, Christians, Sikhs, Hindus and other religious communities.” Although distancing himself from Kellie Leitch and Keith Alexander, leadership frontrunner Kevin O’Leary opposed the motion, citing its ambiguity and “ill-conceived” goals. O’Leary spoke at McGill last Monday in a heavily-attended event, outlining his ambitious plan for 3% annual growth while generally avoiding social issues and policy specifics.

Benjamin Aloi, media team leader (MIR): I’m here with Michael Chong, a candidate for leader of the Conservative Party of Canada (CPC) and, therefore, leader of the official opposition. Mr. Chong, thank you for being here with us tonight.

Aloi: For starters, following the terrorist attack on the mosque in Québec City, you stood out amongst the conservative candidates in noting that certain politicians contribute to a toxic discourse with their “normalisation” of hate. Although the majority of Canadians agree with you, how would you guarantee as party leader that the Conservatives unequivocally support a pluralistic, tolerant society and that they will defend the rights of ethnic and religious minorities?

Chong: I’m going to do it, because I am a minority in Canada. My parents were immigrants who moved to Canada in the 1950s and ‘60s. My father was Chinese, and he moved from Hong Kong to Canada in 1952. My mother was a Dutch immigrant, and she moved here in the ‘60s. So, I fully understand the challenges and aspirations of immigrants in Canada. As party leader and as Prime Minister, I will defend the rights of minorities throughout the country.

Aloi: Do you believe that Kellie Leitch is bringing a right-wing extremist movement out of the shadows? In other words, do you believe Leitch and her supporters represent a genuine faction within the Conservative Party?

Chong: I think that the vast majority, 99%, of Kellie Leitch supporters are good citizens who believe in Canada, who defend Canadian rights and values. But I also believe that if politicians—and it’s not just Kellie Leitch—use demagogic language, discourse, declarations and words, they give legitimacy to hate and discrimination. We can observe hate on social media. During the last few years, we have also seen the rise of hate crimes against minorities in Canada, and I believe this is attributable to politicians that have utilised demagogic discourse.

Aloi: Why do you think most your fellow candidates are, I would say, very hesitant to clearly denounce [these] links…

Chong: I’m not sure, but I can say for myself, I have principles and I firmly believe in our rights, [in] our liberties, in our constitution, in our Charter of Rights and Freedoms…and for me, a leader must defend the rights of minorities. That’s leadership; it’s the principle [upon which] leadership rests.

Aloi: It’s the responsibility of the position

Aloi: In 2006, you resigned from your position as Minister of Intergovernmental Affairs in Stephen Harper’s cabinet, citing his motion recognising Québécois as a distinct nation within Canada. Why are you against this recognition and what is your view on current relations between Québec and the federal government?

Chong: That’s a good question. I can say three things. First of all, this is an ancient debate and as party leader, I am not going to open it again. 10 years ago, we had this debate in the House of Commons and I respect their decision. Secondly, I think the real question before us today as a conservative party is: “Can the next party leader speak both official languages to communicate with our constituents…Is the leader of the Conservative Party going to defend the rights and values of Francophones in Québec and elsewhere in Canada, and [are they going to defend] the reality of the French language in North America?” And for me, the response to these questions is clear: it’s yes. Thirdly…my position on this issue 10 years ago was the exact same position that Justin Trudeau and Jean Chrétien had, and Mr. Trudeau won the highest number of seats in the last election. His father won the election of 1980, so if it [this issue] was not a problem for him, it will not be a problem for me.

Aloi: So, do you make a distinction between Québec nationalism and other forms of nationalism in Canada?

Chong: I believe there is a good nationalism, a civic nationalism based on our…

Aloi: This is the question of nationalism in general. Do you agree with it?

Aloi: One might say Kellie Leitch and her supporters express a form of nationalism, as well.

Chong: I think that Kellie Leitch has used words that have created fear and hatred in our politics. Of course, there is a problem with terrorism in Canada, but if we look at the attacks carried out in Canada over the last few years, all these attacks have been perpetuated by native-born citizens. They were born into families that have been here, for the most part, for generations. And there has not been a single attack in the last few years that…

Aloi: This is not a question of immigration, then.

Chong: No. There has not been a single attack in the last few years that was perpetuated by immigrants or refugees, so if a politician talks about the challenges of terrorism here in Canada at the same time as immigration and refugees, this is dangerous for two [reasons]: because it creates a climate of fear, of hate against immigrants and refugees; and secondly, because it calls attention to something that’s not the cause of terrorism in Canada.

Aloi: Yes, it creates a dangerous perception amongst the Canadian population. Exactly. Okay, finally: Briefly, what is your solution to the shortage of affordable housing in a lot of Canadian cities, especially in Toronto and Vancouver?

Chong: That’s a good question. I think we have a big problem in a lot of Canadian cities with home prices. I think home prices are too high for the middle class and for a lot of families, and I think the main reason for this problem is the Canadian Mortgage and Housing Corporation (CMHC). The International Monetary Fund (IMF) has said we must privatise CMHC and its mortgage loan insurance programme for resolving this issue. It’s part of my platform during this leadership campaign. It is a long-term plan for overcoming this challenge and for putting in place a financial system where home prices are more affordable for the middle class.

Aloi: Okay, thank you so much Mr. Chong and good luck with the campaign.

Chong: Thank you! My pleasure.