Iranian Women Finally Attended a Soccer Game, but the World Shouldn’t be Clapping 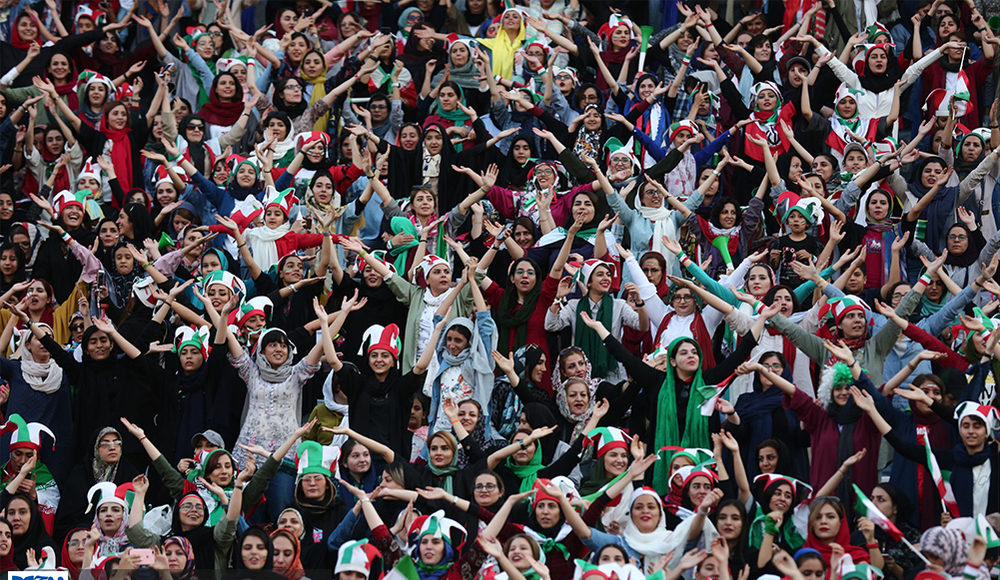 When Iran’s national soccer team played on October 10th for their World Cup qualifying match, the world wasn’t focused on their performance – let alone their 14-0 win against Cambodia – but rather the spectators attending the game.

For the first time in almost forty years, Iranian women were allowed to attend a soccer game in their home country, leading some to call it one of the most consequential sporting events to be played in years.  Women’s tickets were limited to just 4.6 per cent of the stadium’s capacity, and they sold out in minutes. Why then, while the world celebrated the inclusion of women in Iran’s stadiums as a major step forward, were there only 4,600 women allowed to attend a venue with a capacity of close to 100,000?

As of publishing this article, Iran is the only country in the world to ban women from attending male sporting events. Soccer is the nation’s most popular sport, making this an especially salient issue. In recent years, the ban on female attendance has been extended to volleyball and basketball, as their popularity have grown. While Iran’s ban on female attendance at sports venues was never formally written into law, it was put in place shortly after the 1979 Islamic Revolution. Since then, the country’s most senior Islamic scholars have argued that women must be kept away from sports stadiums so they can be shielded from their masculine atmosphere and exposure to half-naked men.

Iranian authorities have not just imposed a ban on women, they have ruthlessly enforced it. The ban has frequently led to arrests, detention, and imprisonment. On August 13th, the Iranian government detained six women who had dressed as men to get around the stadium ban, among them was Forough Alaei, an award-winning photojournalist who had documented their efforts. In September, a month later, Sahar Khodayari, set herself on fire and died in protest of a prison sentence she received for attending a game of a Teheran club disguised as a man.

While neither Iran nor the world’s governing soccer body will acknowledge it, the tragic death of Khodayari was central to the lifting of the ban, as it prompted an outcry against the country’s discriminatory laws and put pressure on FIFA. Though the Football Federation Islamic Republic of Iran (FFIRI) succeeded at breaking basic discrimination and human rights laws as FIFA looked away for decades, this act forced the organization to finally take action. FIFA threatened to suspend the Islamic Republic over its discriminatory policies and sent a delegation to Tehran last month to ensure that women would finally be admitted to the qualifying match.

FIFA President: “Women have to be allowed into football stadiums in Iran” https://t.co/iwG56ZA7Ul

FIFA has finally intervened and pressured Iran to lift the ban. However, leading activists have criticized this action as insufficient and late. In response, FIFA has stated that “women have to be allowed into football stadiums in Iran. For all football matches.” However, it is still unclear how they will address this issue in the coming months.

According to Amnesty International, at least 40 women have been arrested and some prosecuted for attempting to enter soccer stadiums in Iran since 2018. For the organization, both the restriction placed on women and the lack of credible commitment to extending participation beyond this event is, in of itself, proof that the match was used as a “cynical publicity stunt”.

FIFA reiterated that the number of women attending stadiums should be “determined by the demand”. Evidently, the government-imposed cap limiting the number of tickets available to women and the fact that they sold out in just a few minutes highlights Iran’s unwillingness to fully and unilaterally repeal the ban. According to Human Rights Watch, the limit of 4,600 tickets for women was  “discriminatory, deceptive, and dangerous”.

For FIFA, the test is now to see whether progress is possible. Undoubtedly, the organization should have acted sooner to pressure Iran to update its rules of access. Going forward, it must not shy away from its responsibilities, influence, and the power it wields over oppressive gender policies.  This event serves as a reminder of the power of sports, and soccer more specifically. For it is this sport, not politics, that has spearheaded this so-called improvement in women’s rights in Iran. As the world’s most popular sport, soccer has once again served as a powerful global force for change.

In Iran, soccer is distinctively significant, and many activists have understood this and used the sport as a political platform to secure progress. Open Stadiums, a movement of Iranian activists seeking to advance women’s rights, has long campaigned to end gender-based discrimination and let women attend sporting events throughout the country. Through their active presence on social media, Open Stadiums has played a vital role in raising awareness on the issue. But their battle cannot be fought alone.

Female soccer fans say they are “taking back what is ours” by attending historic match. via: Twitter.

As such, FIFA has the power to prompt further improvements in the conditions for women’s access to sporting events by imposing sanctions or demanding change. Publicity and spotlights are fleeting, and attention has already shifted away from Tehran and many of the barriers preventing women from attending domestic matches remain. It is, therefore, up to FIFA to act quickly to build on this success and secure more progress as soon as possible.

Yet this historical day poses an even more pressing question: if the government was sincerely attempting to open up opportunities for women on this occasion, then why were female photographers who applied to document the event denied media credentials? Even more importantly perhaps, why do women continue to be prosecuted for having attempted to access sports stadiums in the past?

The most logical answer is that the decision to open the gates of the Azadi stadium was a reluctant one. Ironically, Azadi means freedom in Persian. However, this decision shows that giving freedom and easing the restrictions and systematic exclusions faced by Iranian women since the Islamic Revolution is a much bigger battle which cannot be won by simply allowing women to attend a single soccer game.

It is still unclear if the ban will be lifted for domestic soccer matches any time soon. Unsurprisingly though, the government seems resistant to making more concessions as they do not want feminist campaigners to request further reforms or broaden the conversation to other areas.

Progress is painfully slow and complying once is not enough. Ultimately, a complete lifting of the ban and dropping the charges of those who have been punished and prosecuted for attending stadiums in the past is necessary, in what is likely to be a long march for the advancement of women’s rights in Iran.

Edit: November 3, 2019. This article’s information has been updated to remove the statement that the stadium was largely left empty.