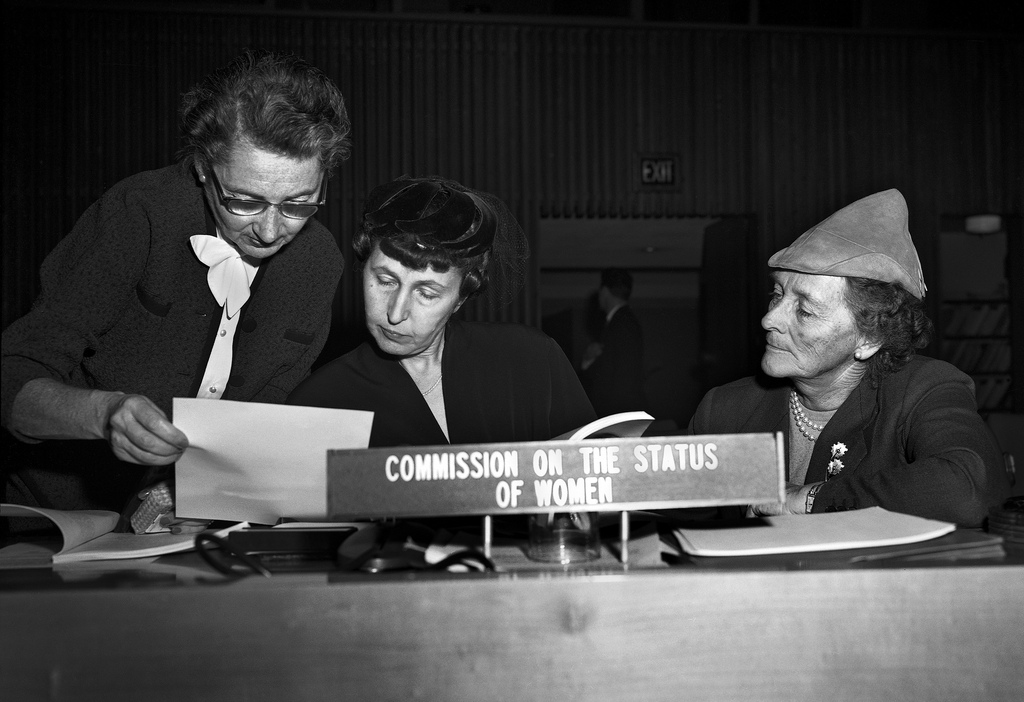 In the context of the UN Commission on the Status of Women ’59, a group of students from McGill University had the chance last week to meet with some countries’ Permanent Missions and UN Agencies, and attend Side Events. We represented the International Relations Student Association of McGill (IRSAM) and this made us a very attractive prospect for discussion for most of the people we met with, given our young and vibrant identity. While discussing the status of women specifically and the international system in general, a few recurring stances emerged that deserve to be highlighted.

Interestingly, although some may say unsurprisingly, the importance of changing discourses was emphasized by many. The Permanent Representative of Pakistan to the UN, Dr. Maliha Lodhi, highlighted two ways in which attitudes in her country have been changing recently. Firstly, girls have been staying in school longer. This was translated into prolonged exposure to changing technologies and varied cultural practices, which is creating young adults capable of critiquing parts of the system they then start evolving in. Second, Dr. Lodhi pointed out that increased participation of women in the media has challenged many beliefs held by Pakistani men on their counterparts. This has impacted national discourse, introducing a wider range of opinions and slowly amending a lot of commonsensical stances in the country.

Meena Ballantyne, the Head of the Agency for the Status of Women in Canada, also said something to this effect. Regarding women employment in STEM fields, she mentioned that a reason for disproportionate male employment – 95 percent – is that women simply aren’t introduced to those skills and specializations during their education. A similar mechanism is at play for many of the skilled trades. She hence argued that, while vocational training is incredibly important, what we need today is earlier exposure, in the context of education, to jobs that may not instinctively be considered ‘normal’ for a given gender, thus challenging the current gendered discourse of employment.

The importance of re-visiting existing discourses was also brought up at a Side Event held by the Permanent Mission of France entitled “Liberté, Egalité, Sexualité.” Kate Gilmore, of the UN Population Fund, challenged the binary sexual code that has been created by the apology of abstinence. She argued that this promotes the idea that a human being is either sexually active or inactive. This is very problematic when dealing with issues such as early pregnancies and forced marriage. Indeed, a child may be physically sexually active because of the demands of their marriage, yet they can consider themselves – or be considered – too young to in fact be sexually active. This thus creates a grey area between the two ends of the scale, where the idea of consent becomes very important and the binary sexual code is frankly too simplistic to identify violations of human rights.

A general corollary to the emphasis put on changing discourses has been the warning that, unless we capitalize on the momentum created by dissenting voices heard around the world, the small victories we’ve achieved so far may very well be lost. This is something that Guillermo E. Rishchynski, Permanent Representative of Canada to the UN, echoed when he highlighted the importance of following through on the advancements that have been made since the Fourth Conference on Women, held in Beijing in 1995. Where many developing nations are currently arguing they need time to let their societies get used to ongoing changes, he said the opposite is necessary. According to the Ambassador, the nations at the forefront of the movement simply cannot afford to wait for others to catch up in terms of societal change, they, in fact, need to keep pushing.

The second theme that kept recurring involves the increasingly intersectional nature of programs and efforts aiming to advance the status of women. For instance, Ted Chaiban, the Director of Programs at UNICEF, emphasized the complementarity of promoting water security and fighting against gender-based violence. Indeed, as he explained, ensuring that water is more easily accessible can help reduce the amount of distance that girls have to cover in obtaining that scarce yet necessary resource, thus simultaneously decreasing the chances they have to be attacked on the way. Similarly, combining daily realities – such as the need for children to help with the harvest – with educational requirements – for instance changing class time from one season to the other – can help reduce early pregnancies and forced marriage as children become less of a burden with the possibility to help at home and get educated simultaneously.

The complementarity of many international issues was also brought up by Agnès Hurwitz, the Senior Policy Advisor on Humanitarian and Gender at the UNHCR. For example, she mentioned that a major cause of gender discrimination, especially in conflict zones with high numbers of refugees, is the inability of women to pass down citizenship to their children, thus effectively rendering them stateless. In this case, the effort to end gender discrimination needs to be embedded into a larger campaign to amend citizenship laws in many countries. Ms. Hurwitz also mentioned that there is a need to tailor certain humanitarian responses to women and girls specifically, given that they have different needs in times of emergencies.

This reality was also discussed at a Side Event held by the Organization of Islamic Cooperation and the US Federation for Middle East Peace entitled “Family, Peace, and Security.” The general discussion criticized the usual absence of consultation of women when designing humanitarian responses, which logically then overlook their specific needs. This is especially important considering that most refugee camps around the world are witnessing an increasing number of families missing a male head of the household, leaving women in charge. This needs to be incorporated into humanitarian programs, which could then include efforts to empower women as the new family leaders, for instance through campaigns to try and get them lawful access to property. Otherwise, the panelists argued, early pregnancies and forced marriage may very well remain a necessary reality in these areas as they are the only ways to survive financially.

At a Side Event held by the Permanent Mission of Canada on Child Early and Forced Marriage, Salam Kanaan, CARE Jordan’s Country Director, also discussed some of the reasons behind this practice. She emphasized that the daily realities in refugee camps, including fear of sexual assault on young girls and higher likelihood of a man being let in a neighboring country if married, create a bundle of strong economic incentives for families to marry their girls off as early as possible. Adding a new dimension to the current discourse, which hails education and awareness campaigns as the best method for fighting this practice, Ms. Kanaan thus also recommended cash transfers and a general provision of services. The need for a more multilateral response was also highlighted by Hope, a 15 year old Kenyan girl involved in this fight in her own country. She argued that punitive mechanisms, i.e. fining or jailing fathers who married their daughters off before the legal age, have been successful in Kenya and she would thus like to see them expanded as well as exported.

It is interesting that, in a UN context of contemporary calls for GA and SC reform, many of the actors we had the chance to talk to seemingly agree on the main pillars of any effort to empower women around the world. Of course, this is not to say that all have the same opinions. In fact, some dissenting visions will be presented in Part 2 of this series, “When We Shook Our Heads.” Nevertheless, the importance placed on challenging existing discourses and recognizing the intersectionality of many campaigns hint at possibly grander and better coordinated international efforts in the future. It is very fulfilling to be able to observe such newly forming possibilities at the UN, which is after all the ultimate forum for substantive discussion on such issues. It can be argued that, at least in its normative mission, this international organization has thus been successful in some regards.

While most of the fruitful discussion that IRSAM delegates witnessed and participated in thus centered on the issue of the Status of Women, we also had the chance to hear about other international debates from Permanent Representatives. For example, we had the opportunity to talk to Yuriy Sergeyev, the Permanent Representative of Ukraine to the UN, about the current conflict in the Eastern European theater. The Ambassador challenged the commonly held belief that Ukraine needs Russia for gas and oil, arguing instead that, while his country is currently dependent on its neighbor for those resources, this is because of a past deal made by a self-interested Prime Minister – he was very careful not to name Yuliya Timochenko here – as well as a lack of investment in Ukraine’s own resources. He thinks that this can and will change in the future, hopefully granting Ukraine a higher level of energy independence.

Ambassador Sergeyev also called the conflict between Ukraine and Russia one between “new and old civilizations” – possibly purposefully referencing Samuel Huntington’s “Clash of Civilizations” – which he argued is today “moving to be a frozen conflict.” This is very problematic because the current Ukrainian infrastructure in the Donbass is incapable of sustaining long-term humanitarian efforts, a shortcoming for which the country has reportedly been criticized at the UN. This is given the failure to provide pensions and other social benefits to parts of its population living in the most remote, war-torn areas. All in all, this was an interesting discussion and the Ambassador was quite frank with all of us, spurring no substantive criticism. This wasn’t the same for all the Permanent Missions we visited however. For more details on those, stay tuned for Part 2 of this series, coming out soon.