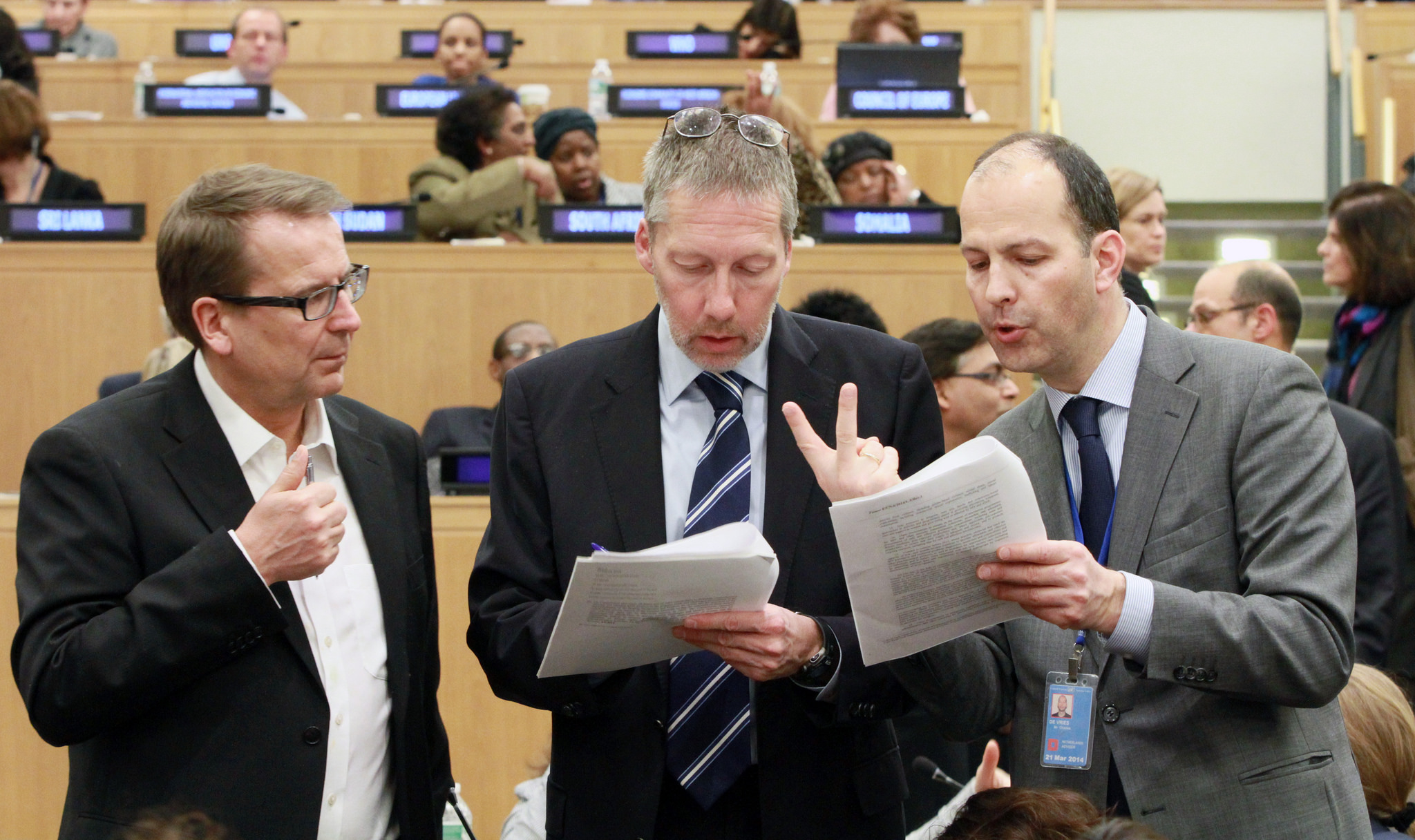 Part 1 of this series outlined the areas of convergence that a group of students from McGill University were able to observe upon attending varied events and speaking with different people at the Commission on the Status of Women ’59 last week. This part will take somewhat of a more critical stance, trying to decipher some of the underlying assumptions and grander schemes hinted at in some conversations.

An interesting discussion with the Permanent Representative of Saudi Arabia to the UN, Abdallah Y. al-Mouallimi, comes to mind. His Excellency took great care to defuse the subject of women driving at the onset of the meeting, after opening up with a great joke made at the expense of Concordia University. It is not illegal, he said, for women to drive in Saudi Arabia. It is simply illegal to drive without a license, which is why women have been arrested in the past: for not holding a valid driver’s license. When asked whether it was illegal for women to obtain driver’s licenses in Saudi Arabia, the Ambassador said no. However, he explained, it just has never been done before and he suspects that, were a women to go up to the traffic administration and request a driver’s license, her application would surely be rejected even though it is not illegal, simply because the person in charge of processing applications would probably not think they have the right to issue such a license to a woman.

His Excellency tempered this statement, arguing that this is a contemporary reality that will need time to be amended. As he narrated, women seen behind the wheel in Saudi Arabia today will be acclaimed rather than attacked or yelled at as they would have been a few years ago. He therefore concluded by saying that, once women start daring to go and demand driving licenses, the process for possible future change will be initiated. This is an interesting argument if only because it projects blame back on the women. Indeed, following this line of thought, they alone are responsible for their current predicament because they haven’t dared standing up for themselves yet. It is thus solely the responsibility of the woman to demand her rights in Saudi Arabia. The man has no part to play in this campaign, and neither does the government. After all, it isn’t even illegal for women to drive or obtain driver’s licenses, so what could the government do?

The presentation that His Excellency gave on the status of women in his country also included an enumeration of supposedly substantive advances made towards the empowerment of women in recent years. However, upon closer look, it is possible to tease out limitations that, in fact, make these advances much smaller than they would first appear. For instance, the Ambassador mentioned that, today, any woman who applies to King Abdullah University of Science and Technology is most likely guaranteed a place, and there are in fact a lot of women currently enrolled. However, this is a school of Graduate Studies. As such, to even qualify for admission in this university, a women needs to have completed primary, secondary and undergraduate university level education. Thus, unless advances are also made at lower levels of education, a guaranteed place at a post-graduate institution is not much of a victory, and not truly promising for future generations.

The other change mentioned is the possibility that women will have to participate, both as candidates and as voters, in the next round of municipal elections. However, open elections do not necessarily translate into free and fair elections. In a country where it may be hard for women to access resources or fight against certain societal stigmas, it is doubtful that many successful campaigns for office will be run. When asked about this, the Ambassador mentioned something to the effect that this would be somewhat of a test-round. If indeed women are shown to be unable to fully and competitively participate, there may be government involvement in the future to guarantee the credibility of their candidacies. In other words, large women participation in politics, even at the lower levels, still isn’t in the books for Saudi Arabia quite yet.

These types of conditional statements claiming that advances have been made were also used by the Iranian Permanent Mission to the UN. Kiumars Javidnia, Third Counselor, and the two women scholars (educated in Canada and Iran) that he had invited to the meeting all made a point of mentioning that there is currently a 56 percent women enrollment rate in Iranian universities. It takes one click of the mouse to discover that there are in fact 54 public universities and 42 state-operated medical schools in Iran today, compared to 289 major private institutions. So really, this statistic isn’t truly ground-breaking in and of itself, at least not to the extent that it was advertised to us in the framework of the meeting. The Iranian delegation also made use of their diplomatic trump card, the all-time famous “this is a technical question.” Thus, when asked why the Iranian government currently funds sexual reassignment surgeries, or why Baha’is – members of a religion not officially recognized by the Islamic Republic – are prohibited from attending colleges or universities in Iran, we were met with a resounding wall of technicalities.

Meetings with some Missions thus offer a drastically different perspective of the UN than that which was related in Part 1. This contrast is also visible in some of the narratives that the Missions uphold, specifically regarding the seemingly common themes of complementarity and intersectionalism hailed by many actors as the future of the development discourse. For instance, a meeting with Israeli delegates, including the Permanent Representative to the UN David Roet, spurred a discussion on the state’s agricultural vision. Reportedly, there have been attempts to mark a shift towards smart agriculture based on high-level technology in Israel, given the climatic conditions not always conducive to successful harvest. In the context of women’s empowerment, the implementation of new agricultural strategies and technologies could be a great opportunity to involve more young girls and women in STEM fields, an area which has widely been criticized for its male over-representation. Unfortunately, when asked about this, the Israeli delegation noted that there had not been concrete efforts made in that direction yet. What they really wanted to hammer home in their meeting with us was the politicization of the UN over the Arab-Israeli conflict.

In some regards, the meeting with the Israeli Permanent Mission was thus somewhat unsatisfying because of the importance given to issues of diplomatic quick sands at the expense of other topics possibly more prone to actual discussion, such as the correction of gendered employment in STEM fields and other skilled trades. This was especially so given the occasional contradictory nature of statements made by the delegates we met with. For instance, the Ambassador made a point of arguing that the CSW was not the place to discuss the Palestinian issue – thus criticizing the inclusion of a report by the Secretary General regarding the Situation of and Assistance to Palestinian Women – given that it should be an apolitical assembly. This was repudiated by one his advisors soon after who argued in fact for the opposite, that the CSW should be recognized as a forum where substantive political discussions should be taking place, especially regarding issues on human rights. As such, she called the Political Declaration on the Occasion of the Twentieth Anniversary of the Fourth Conference on Women an “important political document.”

These debates over the politicization of the UN that many Permanent Missions often hint at were also visible in different contexts. An example of this is the Side Event held by the Permanent Mission of France on “Women Fighting Extremism: In God’s Name? The Role of the CEDAW.” Where there was substantive discussion by some of the panelists, others focused specifically on the achievements of France in this area, for example extensively referencing the financial support that it has contributed to Nigerian efforts to combat extremism in the region. This is just one illustration of how events and other occasions, when held at the UN, are sometimes treated as billboards for actors to plaster their achievements and show the world that yes, they have come through on making their contribution. Another interesting fact to take away from this event was the glaring absence of any reference to the fact that the US, along with Sudan, Iran, Somalia, South Sudan, Palau and Tonga, has yet to ratify CEDAW (the Convention to Eliminate of All Forms of Discrimination Against Women).

Of course, this is not to say that all discussions at the UN have been operationalized in terms of political alignments and passive criticism. Two main examples of successful events come to mind. First, the event on “Family, Peace, and Security” held in cooperation by the OIC and the USFMEP, actually proposed a solution to the problems they laid out. As such, one of the panelists argued that we need to “tax manufacturers of the weapon industry” and use that money to help with “reconstruction and the protection of the woman and the child.” Whether this is a viable option, the fact remains that the talk included both a descriptive and prescriptive component, which was found lacking at many other events. Similarly, a Side Event held by Turkey on “Protecting Women and Girls in Emergencies: Turkey’s Humanitarian Response” proposed the use of Standard Operating Procedures (SOPs) in processing incoming refugees. This is a practice that has also been increasingly used by NGOs as it standardizes responses and facilitates oversight, and it is very promising that it is seemingly being expanded to humanitarian responses as well.

Five days alone at the UN thus let us tease out some grand themes concerning the inner workings of this organization. Firstly, while it may have been intended as a forum for cooperation, it seems that nation states are increasingly skilled at co-opting this institution, using it to bolster their achievements and shift the blame when they fail to come through on their commitments. It is also crystal clear that many Ambassadors and other representatives relish in the diplomatic game, excelling at non-dits and avoiding questions. However, the fact remains that there is hope yet. Amidst a general political atmosphere tense with references to ongoing conflicts and human rights discrepancies, some do manage to stay on the ball. Namely, the UN is still bringing forth ideas for solutions and challenging existing narratives. Maybe it’s up to us to revise our expectations and focus on seeing change in the long-run. After all, an international forum cannot truly be expected to spur immediate action or reaction. Or can it? That is for you to decide.