ISIS Knocks on the Door of Southeast Asia 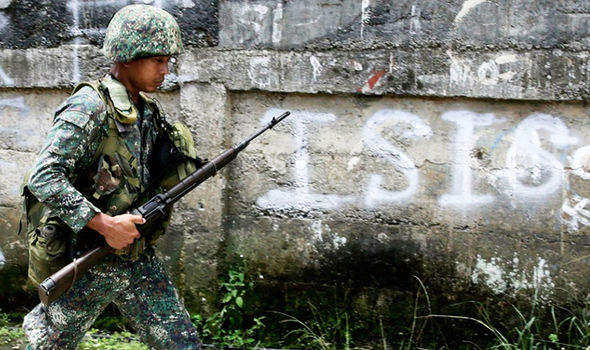 ISIS recently established a foothold in Southeast Asia with the capture of the city of Marawi, located on the southern islands of the Philippines, Mindanao. This takeover occurred on May 23 and has transformed Marawi into a battleground between ISIS-affiliated militants and the Filipino government over control of the city, now under martial law. Some experts argue that the crisis of Marawi highlights the formation of a unified Islamic front in the Philippines, under the black flag of the transnational terrorist group. The formation of a more cohesive Islamic front has led to a drastic increase in casualties as insurgents use ISIS tactics and weapons to match the strength of government forces. Deaths resulting from the fighting are estimated to be around 500 since the beginning of the crisis.  The conflict has also created a deep humanitarian crisis in the region, characterized by the forced displacement of most of the city’s population, as well as the sexual enslavement and enrollment of child soldiers in the ISIS controlled zone.

The current situation in Marawi emerged from the failed attempt of the Armed Forces of the Philippines (AFP) and the local police to capture Isnilon Hapilon, the leader of the radical Islamist group Abbu Sayyaf. Hapilon is wanted by both the Filipino government and the FBI for his group’ terrorist attacks and kidnapping in the Philippines, as well as his recent appointment as the emir of the Islamic State forces in the Philippines by ISIS. Abu Sayyaf was previously affiliated with the transnational terrorist group, Al-Qaeda, before pledging allegiance to ISIS in 2013-2014. His original aim to create an independent Islamist state through violence evolved into the expansion of the Islamic State of Iraq and Syria into the southern Philippines through affiliated groups. Other Islamist insurgent groups, such as the Maute group, joined the ranks of Abu Sayyaf to achieve the same goal, the formation of a transnational Islamic front.

The main motivation to pursue a transnational Islamic front by the Filipino Muslim insurgents has roots in local politics rather than an opaque religious movement. In fact, the cultural gap between Filipino Christians and Muslims created by the Spanish and American colonial legacies became increasingly contentious after the formation of the first republic of the Philippines in 1946. The post-1946 policies of the Christian-led government included the settlement of Christians into traditional Muslims areas in the south as well as the killing of Muslim soldiers in 1968.  The consequential ethnic discrimination sponsored by the Christian state led to a long-term Christian-Muslim feud in the country, characterized by Muslim poverty and insurgency.

More importantly, the institutionalization of ethnic inequality led to the vertical establishment of Muslims at the bottom of the socio-economic order by the Christian government  This ethnic stratification of Filipino society meant a noticeable division within the Muslim group as individuals with no state connections remained marginalized. In fact, insurgent groups like Abu Sayyaf and Maute are mainly known for their criminal activities linked to financial motives, such as ransoms and drug trafficking. The affiliation of those militants with ISIS can thus be understood as an uprooted response to the lack of opportunity necessary to elevate them from their enduring poverty trap. The fact that the main victims of the ISIS militants in Marawi are Muslims further demonstrates the breakdown of the militants’ social bonds with the ethnic group, based on their socio-economic marginalization.

On the other hand, the motivation of ISIS to associate itself with the Filipino Muslim insurgents comes from geopolitics. The territorial loss in Iraq and Syria by ISIS is an important factor explaining the move of the transnational terrorist group’s focus towards the southern Philippines; Mosul represents just the most recent Middle Eastern loss for ISIS. In fact, such a move allows ISIS to pursue its goal to establish a universal Caliphate across the world by gaining access to a prominent Muslim population in the southern Philippines and its neighbouring countries, Indonesia and Malaysia. Therefore, in addition to positioning themselves at the heart of the Muslim world in Southeast Asia,  ISIS militants can expand their reach more easily during operations due to the relatively porous borders between the aformentioned countries. The shift in ISIS’ focus can be seen through the recent appointment of the leader of Abu Sayyaf, as well as the economic and military support of the Filipino militants in Marawi. As a matter of fact, the Filipino military and other experts reported the presence of foreign fighters in the Marawi conflict, as well as the use of ISIS’ military equipment and strategies by the militants.

ISIS’ transnational involvement in the local Muslim insurgency in the Philippines makes reconciliation between Muslims and Christians more difficult for the President of the country, Rodrigo Duterte. Although Duterte is mostly known for his radical drug war, the President also attempted to open peace negotiations with Muslim insurgent groups. With the advent of new ISIS-fueled conflict, the proposed negotiations could be undermined, depending on the development of the conflict. Cooperation between Muslim and Christian populations in the regional conflict is essential for the communication needed to find and root out terrorist militants. On the other hand, if the Filipino government and police cannot succeed in fostering cooperation with Muslim civilians, more grievances and casualties may result.

Therefore, the local and transnational motives underlying the cooperation between ISIS and Muslims militants in the Philippines are crucial to understand. The recent formation of a more cohesive and organized Islamic Front in Southeast Asia is the result of political losses at different levels. At the local level, Filipino Muslim insurgents affiliate themselves with the transnational organization as a solution to elevate themselves from their institutionalized socio-economic marginalization. For the transnational organization, such an affiliation allows it to counterbalance their recent territorial losses in the Middle East and preserve its influence over the Muslim world.