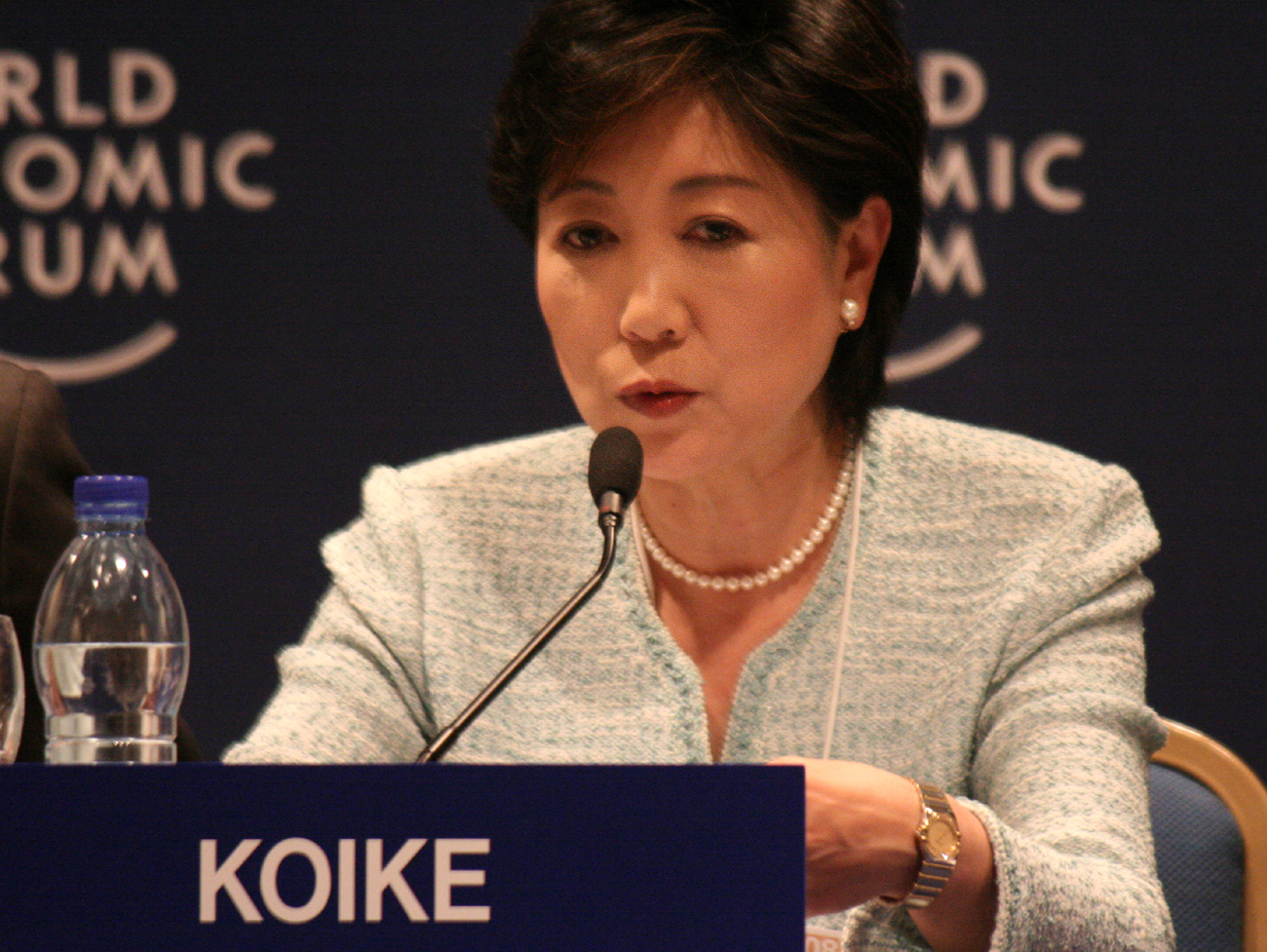 Koike, at a forum on the "Future of the Middle East". Koike studied in Egypt and is fluent in Arabic.
Share

On September 17, Japanese media outlets buzzed with speculation that Prime Minister Shinzō Abe was preparing to call a snap election for late October. It had been less than three years since the previous poll, but Japanese parliaments almost never complete their four-year terms, as it is customary for prime ministers to call an election when it is most favourable to them. The timing for Abe was obvious – the opposition was in disarray and in no position to unseat him; another supermajority for his Liberal Democratic Party (LDP) was a done deal.

On the 25th, independent Governor of Tokyo Yuriko Koike announced the creation of a new party, the Party of Hope. Contrary to prior speculation, Koike (KOY-keh) herself would be its leader instead of a close confidante. Clearly, she was trying to capitalize on the momentum from her shock victory over the LDP in the Tokyo Assembly nationwide.

Three days later, the Democrats, the main opposition party, essentially disbanded and endorsed Koike; its “conservative” candidates would run under her party’s banner. The party’s “liberals” then bolted and started a new party a few days later. (“Conservative” and “liberal” here go along Japanese definitions, where the former means hawkish, nationalist, and US-aligned, and the latter means dovish; here these terms are in quotes for clarity).

It is entirely fair to say, then, that over the course of a week, Yuriko Koike single-handedly reshaped the political landscape in the world’s third largest economy. She managed to do in days what the Democrats have consistently failed to do for the past five years: create a party that can plausibly rival the LDP. She understands in a way the Democrats never did how voters are looking for strong personalities and coherent narratives rather than party organization.

The country is not accustomed to an exciting or unpredictable political scene. In the 21 general elections held since its founding in 1955, the LDP has won 19 outright, including a 12-for-12 streak from 1955 to 1993. Through the 1980s, Japanese elections were fought mostly over Cold War issues of national security; the US-friendly LDP were always at least twenty points ahead of the opposition Socialists. Meanwhile, in other issues, the LDP did not have much of a cohesive agenda; it made decisions by consensus between its multiple powerful factions. A multi-member district system allowed multiple LDP candidates, of varying ideologies, to run against each other – meaning that general elections determined the factional balance within the LDP, rather than the party balance within Parliament. Personal, candidate-voter relationships and “pork-barrel” projects also played important roles. [1][2]

In the 90s, similarly to the rest of the democratic world, Japanese politics took a turn toward volatility. The end of the Cold War spelled doom for the Socialists, and their successors in the role of opposition were more comfortable appealing to the vast centre. The popping of the asset price bubble in 1990, marking the beginning of the Lost Decade, meant the divisive issue of foreign policy took a backseat to economic reform. Finally, the introduction of a single-member district system made party leaders considerably more powerful, as they could select and deselect party candidates.

All of these changes in tandem meant that a single, charismatic leader was far more capable of single-handedly shaking up the political scene than previously. (This was the dynamic that led Morihiro Hosokawa to become the first non-LDP prime minister in 1993, though his socialist-centrist-reformist coalition quickly collapsed). As it happened, the LDP was eternally fortunate that Jun’ichirō Koizumi took helm of the party just as the opposition parties were uniting in 2001. Even as the newly-formed Democratic Party put up respectable scores, Koizumi’s once-in-a-generation charisma, aggressively reformist agenda, and decisive handling of foreign policy endeared him to the public and won the LDP five more years of power.

On the other hand, upon Koizumi’s retirement, the LDP was once again led by a revolving door of unmemorable, dynastic politicians – which cost the party control of the Senate in 2007, and of government two years later.

The LDP got its second stroke of luck when the Democrats proved themselves woefully incompetent in power, flubbing foreign policy, flip-flopping on economic policy, and being indecisive in face of the 2011 triple disaster involving earthquake, tsunami, and nuclear meltdown [3]. The LDP, with Abe at its helm, won the 2012 election with a laser-like focus on his “Abenomics” policy of economic recovery, beginning a five-year-long string of victories.

The Democrats’ incompetence helped him. Naturally there was a limit to how well the party could do a few years after destroying its credibility in government, but the party became perceived as only interested in complaining about the government while having no ideas of its own. Its one serious attempt at formulating policy, a nuclear power phase-out, was quickly withdrawn due to internal resistance. It did not have a cohesive worldview – the party was a hodgepodge of both “conservatives” left out of the LDP hierarchy and “liberals”, which further inspired doubts about its intentions. Its revolving door of leaders were not especially personable.

It wasn’t even clear what their motives were. One would expect opposition parties to emphasize the need to win government and enact policies to help people, but prominent in Democrats’ language is the idea of becoming an ukezara (“receptacle”) – a party credible enough that disenchanted LDP voters can give them a shot. Since Japan has a single-member district system, there must be two large parties; and therefore the Democrats must be the second party – what the party stands for was of secondary importance.

If the Democrats didn’t understand the primacy of identity and narrative in winning votes, Koike clearly did. After all, earlier this year, a party that she set up from scratch trounced the LDP in the Tokyo Assembly elections, a victory based largely on her personal popularity (the Democrats, meanwhile, collapsed to fifth place).

Koike, who had her beginnings in broadcast journalism, showed her dramatic flair quite well at the press conference announcing the party’s establishment. She screened a clip of her silhouette, in her trademark green suit, striding through a dark hallway as she is jeered at by men in suits, representing the “old boys’ club” of vested interests that, it is implied, makes up the LDP. She announced that her new party would “reset” Japanese politics, not unlike how Emmanuel Macron did earlier this year in France. Critics charge that she has only vague narratives and no concrete policies – though this was also the case in her victorious Tokyo campaigns.

Koike stated that she herself would not run for Parliament and would instead focus on the work given to her by voters as Governor of Tokyo (this is the logic that led me to previously conclude she is unlikely to ever become Prime Minister). Yet she has also stated that her party’s goal is nothing short of forming government – and it is not clear who else in the party could serve as prime minister, leading some to doubt her public statements about staying as governor.

The shock of her announcement to the political system was immediate and absolute. Numerous reformists who previously attempted to challenge the LDP rallied to her immediately. The Democrats had, over its two decades of existence, seen many challenging times and outlasted numerous third parties – but this time it saw which way the wind was blowing and dissolved itself, essentially handing Koike the title of opposition leader.

In addition to its immediate impact on the country’s political scene, Koike’s rise revealed an important point of politics in Japan: that strong, credible leaders who can read the public mood are of central importance, more than party brands or organization are. The LDP’s dominance is far more vulnerable than its postwar success might suggest.

To be perfectly clear – Koike’s party is still very much the underdog. A poll conducted the day of dissolution revealed that 19% were planning on voting for the new party, and 34% for the LDP; 25% were undecided. There have been reports that Koike herself finds outright victory at this election unlikely, and that she is laying the groundwork for a future run.

However, there will be a future run, without a doubt. Koike is well-liked, and her well-established independent streak and former stint as Defence Minister give her credibility; three or four more years will give her time to flesh out a more concrete programme. If Abe’s successor as LDP leader turns out to be unimpressive in the way Koizumi’s successors were, the path to a Prime Minister Koike is far from unthinkable.

This article was edited by Marissa Fortune.
Share FacebookTwitterGoogle+ReddItWhatsAppPinterestEmail