Jean-Michel Basquiat, Police Brutality, and “The Death of Michael Stewart” 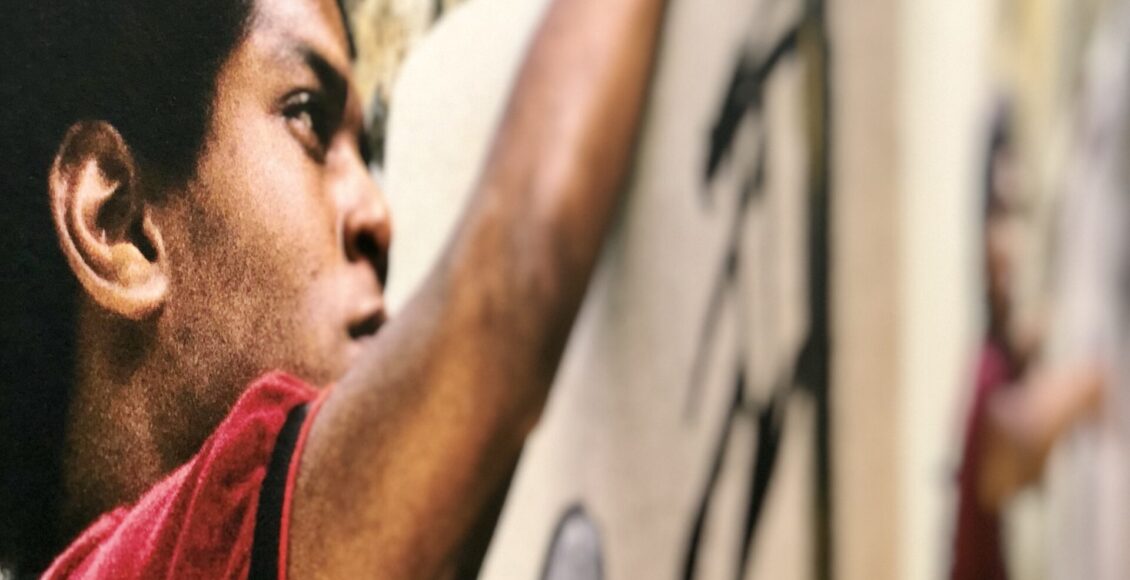 Jean-Michel Basquiat is considered one of the best-known artists of his generation, and is one of a small number of Hispanic-African-American artists to have achieved international recognition. During the eight years he painted, his work examined the legacy of the colonial enterprise and his own relationship to it. His experience as a Black artist in the 1980s strongly informed the central role held by race and racism in his art. Nearly four decades later, the dominant issues of Basquiat’s generation, including police brutality as depicted in his famous painting “Defacement,” and the lack of opportunities for Black, Indigenous and People of Colour (BIPOC) in the art world are still present. Many of the obstacles Basquiat faced are structural barriers that remain for today’s BIPOC artists, who continue to use their art to denounce racism.

The concept of race is central to Basquiat’s work. His painting Hollywood Africans features images and texts relating to stereotypes of African-Americans in the entertainment industry. Furthermore, in Irony of the Negro Policeman, depicting an African-American police officer, Basquiat offers his personal take on what civil rights activist W.E.B. Du Bois famously called “double-consciousness”— the internal conflict experienced by subordinated groups in an oppressive society. Basquiat zealously believed that African Americans were subjected to the dominance of a white oppressive policing system. In this painting, he envisages the role of a black policeman as that of working to enslave his fellow African American citizens, strongly denouncing the system in place.

“Everything he did was an attack on racism and I loved him for this,” said his lover Suzanne Mallouk in Widow Basquiat. In addition to tackling racism in his artwork, Basquiat also made a point to be anti-racist through his actions. Mallouk described him in MoMA sprinkling water from a bottle while explaining that “this is another of the white man’s plantations,” emphasizing the fact that “there [were] no black men in museums,” a reality he had to grapple with during his career. When MoMA was offered Basquiat’s work during his lifetime, it declined, and it still doesn’t own any of his paintings. The head curator, Ann Temkin, later acknowledged this reality, stating “I didn’t recognize it as great, it didn’t look like anything I knew.”

Racism also had an everyday impact on Basquiat’s life. He would leave successful opening parties and find it impossible to get a taxi. George Condo, also an artist, recalls going to a restaurant with him in Los Angeles and not being allowed in. In the same way that MoMA rebuffed his work, Basquiat found himself rejected from this restaurant because of the colour of his skin.

The racism encountered by Basquiat as a Black artist mirrors much of the racism denounced by current protest movements. For instance, Guerrilla Girls, an anonymous group devoted to fighting sexism and racism within the art world, has made a series of posters reading “You’re seeing less than half the picture — without the vision of women artists and artists of colour”  or “When racism and sexism are no longer fashionable, what will your art collection be worth?” Evidently, the challenges faced by BIPOC artists within the art world are far from resolved.

“The Death of Michael Stewart”

On September 16, 1983, New York’s transit police arrested Michael Stewart for allegedly writing graffiti in the First Avenue station. Less than an hour later, they delivered him to Bellevue Hospital, in a coma, where he died 13 days later.

Stewart’s family doctor cited strangulation as the cause of death, possibly from a choke hold similar to the one that killed Eric Garner in 2014. Six NYPD officers were charged with criminally negligent homicide, assault and perjury, but found not guilty by an all-white jury.

Later that year, Basquiat used acrylics and markers to dash off a sketch of two fiendish cops beating a figure shown in black silhouette, with the legend “¿defacement©?.” This was painted on a graffiti-crowded wall of Keith Haring’s NoHo studio.

Jean Michel Basquiat was distraught by the attack, friends recall, and said repeatedly, “It could have been me.” Like him, Michael Stewart was young, handsome, middle class, dreadlocked, and Black. Basquiat had also come to prominence as a graffiti artist, as part of the duo SAMO (short for “same old shit”), tagging walls of the Lower East Side with enigmatic phrases.

Michael Stewart’s treatment while in police custody and the ensuing trials of the six NYPD officers stimulated a broader debate around the responsibilities of officers in handling suspects and police brutality. Through his art, Basquiat expressed the concerns and fears of many, at a time where issues like these were sparsely discussed. As Guggenheim’s first black curator, Chaédria LaBouvier explains: “In 1983, we didn’t have a language around police brutality or white supremacy or state violence to talk about these issues publicly. There was, and is, this very real fear that the police, if you’re a Black person, can kill you and get away with it. I think Basquiat was aware that this was not just about Michael Stewart or even him, but that there is a history of state violence against the black body.”

“Defacement” — along with Basquiat’s overall legacy — continues to resonate today, as is evident from the numerous incidents of police brutality against BIPOC, as well as the lack of accountability vis-a-vis the police officers responsible.

On May 25, 2020, George Floyd was killed at the hands of  Minneapolis police officer Derek Chauvin, while three other officers looked on. He, Michael Stewart, Eric Garner, Michael Brown, Tamir Rice, Walter Scott, Alton Sterling, Philando Castile, Stephon Clark and Breonna Taylor are only a few of the thousands of unarmed Black individuals killed by police in the US. In 2015 alone, police killed 104 unarmed Black individuals. That same year, 36 per cent of unarmed people killed by police in the US were Black, despite them only constituting 13 per cent of the country’s population. Only 13 of these 104 cases resulted in officers being charged with a crime.

Perhaps intentionally, Basquiat’s depiction of the death of Michael Stewart, as a simple dark silhouette, allows the painting to accommodate these other instances of police brutality that continue to unfold. At the time of its creation, this piece sought to represent the history of police violence against Black individuals, yet it has proven relevant in characterizing patterns of racism still present today.

“How long do you want for your progress?”

In the current climate of brutality, the novelist and activist James Baldwin’s famous quote unfortunately continues to ring true: “How much time do you want for your ‘progress?’ […] You always told me it takes time. It has taken my father’s time, my mother’s time. […] My niece’s and my nephew’s time.”  Forty years on, Basquiat’s work echoes James Baldwin’s question and his criticism of police brutality against BIPOC remains as relevant as ever.

So much is lost as a result of the structural barriers and institutionalised racism that currently exist. As explained by the National Association for the Advancement of Colored People (NAACP) President, Derrick Johnson, “Can you imagine what it would feel like if you’d never heard the voice of Aretha Franklin? […] That’s what this is about.” Given the current circumstances, the question of how to remove those barriers for emerging BIPOC artists is pressing. Black artists play a central role in society, both in terms of providing incredible art, and as a powerful voice against injustice. Following in Basquiat’s footsteps, they play a key role in the current fight against racism and their voices should be amplified.