Jon Stewart, Satire, and the Decline of American Media 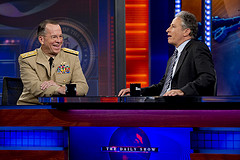 Recently Jon Stewart announced his forthcoming departure from The Daily Show. His announcement took front page of many newspapers, including The New York Times, underlining his influence on American media. Stewart has hosted The Daily Show for 17 years, and become a fixture of the American media landscape. Over that time, he has pushed political satire to new heights, to the point where the American satirist often stands shoulder to shoulder with the traditional newsman.

The Daily Show built up its credibility by offering a counter-weight to the excesses of cable news networks. Many of its segments were targeted not at news stories themselves, but how American cable networks chose to cover them. The show grew in popularity while traditional media was in decline. A year into Stewart’s tenure at The Daily Show, trust in mass media stood at 53%. That number now stands at an all-time low of 40%. Americans, especially young viewers, distrustful and frustrated with the cable news networks, turned to figures like Stewart, who gradually became a trusted voice. Some even considered him primary source for news.

Stewart’s rise, and that of American satire, is directly related to the decline of the traditional newsman. Stewart’s announcement came at the helm of the highly unceremonious departure of NBC anchor Brian Williams, one of the most respected names in television news. Williams was forced to take a 6-month unpaid leave from the Nightly News for “misrepresenting events that occurred while covering the Iraq War.” The nearly instantaneous scandal over Brian Williams’ false Iraq stories, though warranted to an extent, also reflects a deep cynicism amongst the American public. This cynicism has fed American satire, and increased its stature and influence.

Stewart was not only a critic of the American political climate; he also moved to shape it. Consider his 2010 Rally to Restore Sanity in Washington DC, that drew an estimated 250, 000 people. The rally served as a protest against political extremism, demonstrating through its sheer size the strength of centrist politics. Stewart’s influence had more specific consequences as well. His appearances on CNN’s partisan debate program Crossfire, in which he directly challenged the show’s hosts, had the show cancelled twice. Stewart has transformed satire into more than just a comedic outlet for frustrations with American politics and media, at times becoming the very vehicle through which to change it.

The Daily Show built the foundation of modern American satire, which is now rapidly expanding. When it began back in 1998, Stewart was one of the few voices decrying the hypocrisy of America’s pundits and politicians. Since then, The Daily Show brand has expanded to include the company of John Oliver’s Last Week Tonight, Larry Wilmore’s Nightly Show and, until recently, Stephen Colbert’s The Colbert Report, all of whom got their start with Stewart.

These programs and their hosts have become much more ambitious and influential. Last Week Tonight has over a million YouTube Subscribers and close to 200 million views on its videos. John Oliver has tackled subjects ranging from civil forfeiture, gay rights in Uganda, and net neutrality, that are far from easy comedic material. The Nightly Show devoted an entire episode to the issue of black fatherhood. These programs have come to inhabit a key political space in the American media, standing at the intersection of politics and culture. They link an often-disaffected young audience to the daily news while most major networks struggle to remain relevant. Satire has become an institution in the American media, challenging the dominance of the cable networks.

Cable networks have hardly taken the hint. As Stewart consistently points out, CNN’s broadcasts are often no more than an incoherent mess. Anchors use unnecessary and cumbersome high-tech touch screens rather than simply focusing on the story. They lazily rely on Tweets and Facebook statuses for the public’s opinion. Their broadcasts continued to be dominated by laughably large panels of “experts” and airtime filled with meaningless information in order to meet the demands of the 24-hour news cycle. Take, for example, CNN’s nonstop coverage of missing Malaysia airlines flight 370, where anchor Don Lemon wondered whether something “supernatural” might have occurred to the plane. CNN may be an extreme example, but most cable networks have adopted similar practices. News networks are simply out of touch with many of their viewers, pushing many to satirical news programs instead.

With the credibility of the traditional news anchor declining, satirists have often filled the gap between a politically disaffected public, and a gridlocked Washington. The logic of satire resonates through the absurdity of the American political system, so much so that its authors have become authoritative voices on American politics. In a recent interview John Oliver expressed reservations about taking over the Daily Show, fearing he had not earned the trust that Stewart had. Oliver explained “Occasionally when something really terrible happens people just want to hear from John about it. There have been times when he helped people feel some sort of catharsis through comedy (…).” Stewart has gained the kind of trust that at one time would have been reserved for traditional newsman like Walter Cronkite.

While cable news in the United States continues its dismal state of affairs, the Stewart brand of satire is thriving. Stewart is not poised to exit the scene, no doubt exhausted from his longstanding feud with the cable networks. Its unlikely that Stewart would have gained his current status in the media landscape were it not for the poor decisions of networks like CNN. Though satire and criticism is healthy for the system, it is also evidence of its deep dysfunction. Change in American mass media is long overdue, but for now it seems that the satirist will take the seat at the news desk.