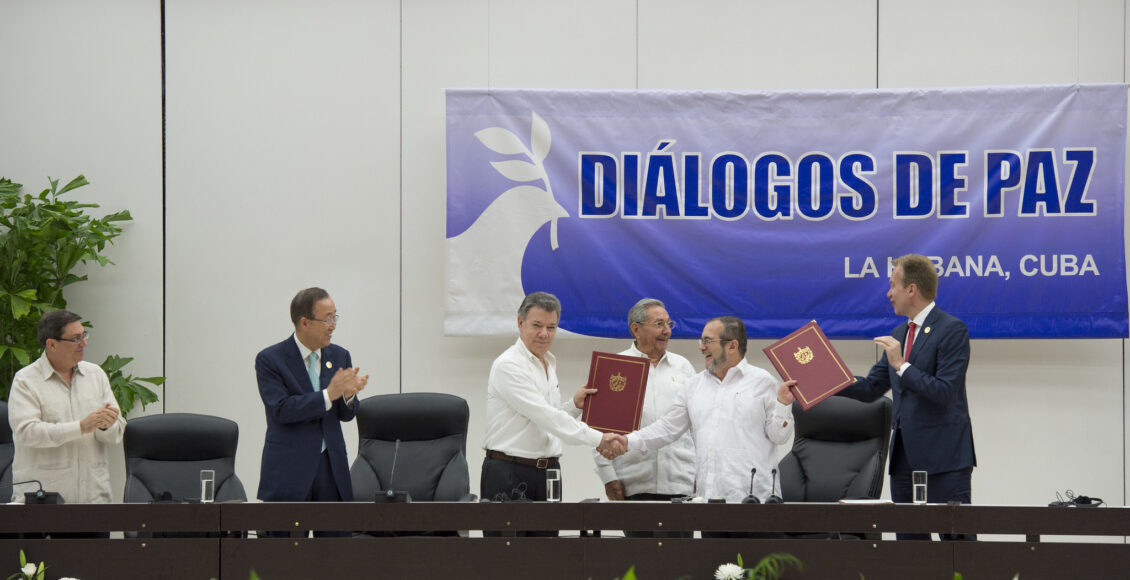 On January 28, Julieta Lemaitre, chief magistrate of Colombia’s Special Jurisdiction for Peace (JEP), read out the tribunal’s first-ever ruling before a nearly empty Bogota courtroom. The JEP accused eight prominent members of the FARC, a rebel group turned political party, of war crimes for kidnapping more than 21 000 civilians between 1990 and 2016. The accused had 30 days to make a choice: accept the charges and face up to eight years of community work with restricted freedoms, or reject them, take the charges to a criminal trial, and face up to 20 years in jail.

Allegedly, the JEP’s gruesome accounts of war crimes shocked the charged FARC leaders — but they remained silent on the court’s verdict for weeks. Finally, on February 26, six former rebel commanders held a joint press conference to accept war crimes charges. “We recognize that during [the conflict], actions and conduct punishable in the eyes of international humanitarian law took place. [These] actions and conducts have been individually and collectively recognized by the JEP, society in general, and in activities with victims,” said a statement co-signed by the six members.

Despite the commanders’ compliance to the charges, the ruling was still a devastating blow to the FARC. Since a historic 2016 peace deal, the movement has tried but struggled to erase its image as the Colombian government’s armed Marxist-Leninist foe. A majority of Colombians — 9 million of whom are officially registered as victims of the 52-year civil war — have been reluctant to accept the FARC (now rebranded as “Comunes”) as a legitimate political force. The accused included the FARC’s former guerrilla leader Rodrigo Londoño “Timochenko,” who stood grinning in bright-white attire, having shaken former President Juan Manuel Santos’ hand during the peace deal signature ceremony five years ago. Many Colombians will see Londoño’s indictment as a sign that the JEP will not spare, for political expediency, influential individuals from the due course of the law.

But in what could be considered a significant victory for Colombia’s novel transitional justice system, the Colombian government has notably refrained from giving the JEP any praise. President Ivan Duque, a long-time opponent of the JEP, instead criticized the court’s decision to offer non-prison sentences to commanders accused of war crimes. “What’s at stake is that these sanctions are proportional and effective and do not result in the re-victimization of individuals who suffered on account of those who committed these crimes,” Duque agonized in a televised address a few days after the ruling. The President wants to see the JEP give harsher punishments, a key electoral promise that won him both the support of former President Álvaro Uribe and the presidency in 2018.

The divided response in the court’s ruling has magnified the rifts and cracks of a transitional justice system designed to straddle the uncomfortable middle between accountability and reconciliation. It is no panacea, but for a country where the threat of a return to violent conflict remains very real, the JEP’s emphasis on pragmatic justice might be the best outcome possible. As such, the January ruling sets a positive precedent for future FARC and military criminal cases awaiting verdicts and offers the fractured nation a stepping-stone towards more durable peace.

The JEP’s genesis: a rocky start

The 322-page peace deal signed in September 2016 was applauded internationally for its reconciliatory approach to ending a conflict that has ravaged the country for the past half-century. The peace negotiators argued that rather than merely bringing the bloodshed to a standstill, the agreement would address the core causes of the conflict. The deal notably guarantees the FARC 10 seats in the Colombian Congress for the foreseeable future, in exchange for the complete disarmament of its guerilla forces — an attempt to channel the FARC’s rural-focused socialist grievances from violent to nonviolent means.

Yet, President Santos’ conciliatory approach to peace negotiations with the FARC risked being undercut by the inclusion of the JEP: a special transitional justice court that could investigate and convict any crime — military or guerilla — committed during the civil war. With its purportedly broad jurisdiction and loosely defined mandate, the conception of the JEP made it rife for ambiguity, and understandably, it became the most contentious component of peace negotiations. FARC negotiators pressed for more lenient sentences for war crimes, with the risk that harsher sentences would alienate the still-armed and powerful guerilla commanders and potentially re-escalate violence. However, the Colombian public strongly favoured severe punishments as just retribution for the murders and kidnappings of thousands of civilians. The result of negotiations — a JEP with a two-track system that would offer non-prison sentences to criminals who recognized their responsibility in perpetrating war crimes — was firmly rebuked by the Colombian electorate in a referendum on the peace deal days after it was signed. The “No” campaign to the deal, which won the plebiscite by a slim 50.2 per cent majority in October 2016, had argued that the offering of non-prison sentences to criminals essentially amounted to impunity for their war crimes. Ordinary Colombians could be given a harsher punishment for nonviolent offences like theft or drug possession — a fact that disheartened many voters to the JEP. Yet, in spite of the majority opposition vote, which risked leaving peace negotiations between the FARC and the Santos government in disarray, the agreement was merely tweaked before being ratified by the Colombian Congress in November 2016.

Still, there is hope that Colombia’s JEP can bring about lasting change. Its neighbour Peru is a notable success story in its use of transitional justice in the early 2000s. When the country transitioned from a military dictatorship to a military-backed semi-democratic government in the early 1990s, President Fujimori granted amnesty to military members for war crimes committed during the previous dictatorship, hoping this would stave off the threat of a military coup. However, when the Fujimori regime collapsed in 2000, the fragile relationship that kept the military sheltered from the judiciary and electoral accountability quickly unravelled. Amid the political chaos, NGOs that were newly freed from repressive civil society laws pressured the new democratic government to overturn amnesty laws — which it finally did in 2001 under President Alejandro Toledo — without falling prey to a military coup. A Truth and Reconciliation Commission was subsequently created in 2001 to expose war crimes committed by the military and other militias between 1980 and 2000; the Commission notably investigated crimes committed by the very same military commanders who had wielded substantial power a mere half-decade earlier.

Yet in most ways, Colombia’s experiment with transitional justice is unprecedented. Unlike in Peru and other South American neighbours who have used special tribunals to try abuses within their former governments, Colombia’s JEP has the task of investigating two former civil war foes. The FARC, moreover, being a rogue, non-state actor, has much to lose in joining a peace treaty that demands that it completely disarms its forces while simultaneously holding its leaders and soldiers accountable. From the FARC’s perspective, such asymmetrical conditions make the Colombian government powerful enough to wipe the FARC out of existence entirely. For instance, a key promise of Ivan Duque’s successful bid for the Presidency in June 2018 was to revise the JEP to make the sentencing of FARC members harsher. President Duque vowed to make constitutional reforms to the agreement, adding provisions to widen extradition conditions for crimes and toughen rules over sentencing — effectively changing the conditions to which the FARC had agreed. Colombia’s Lower House and Senate, however, fearing the amendments would threaten the very implementation of the deal itself, struck the reforms down in 2019. Nevertheless, Duque’s scuffle with Congress highlights how vulnerable the enforcement of the peace agreement’s conditions has been to political volition.

In light of its January ruling, the JEP proves that finding an uncomfortable middle between accountability and cooperation does work. The FARC’s indication that it will comply with the tribunal’s conditions further demonstrates its willingness to cooperate with prosecutors in good faith and respect Colombian law. Accepting the ruling also sets a positive precedent for the JEP, which is set to hand out their final verdict on military officials involved in the murder of over 6 000 unarmed civilians — to falsely boost enemy death counts — later this year. Known as the “falsos positivos” scandal, the verdict could further antagonize President Uribe to the JEP, as his adamant support for the military risks taking a serious blow. Respect for the JEP from both sides is thus essential for the tribunal to properly function — because, despite its frustrating imperfections, the JEP might be Colombia’s best chance for achieving accountability and long-term peace.