Keeping Up with the Parks: All You Need to Know About Korea’s New Reality Show 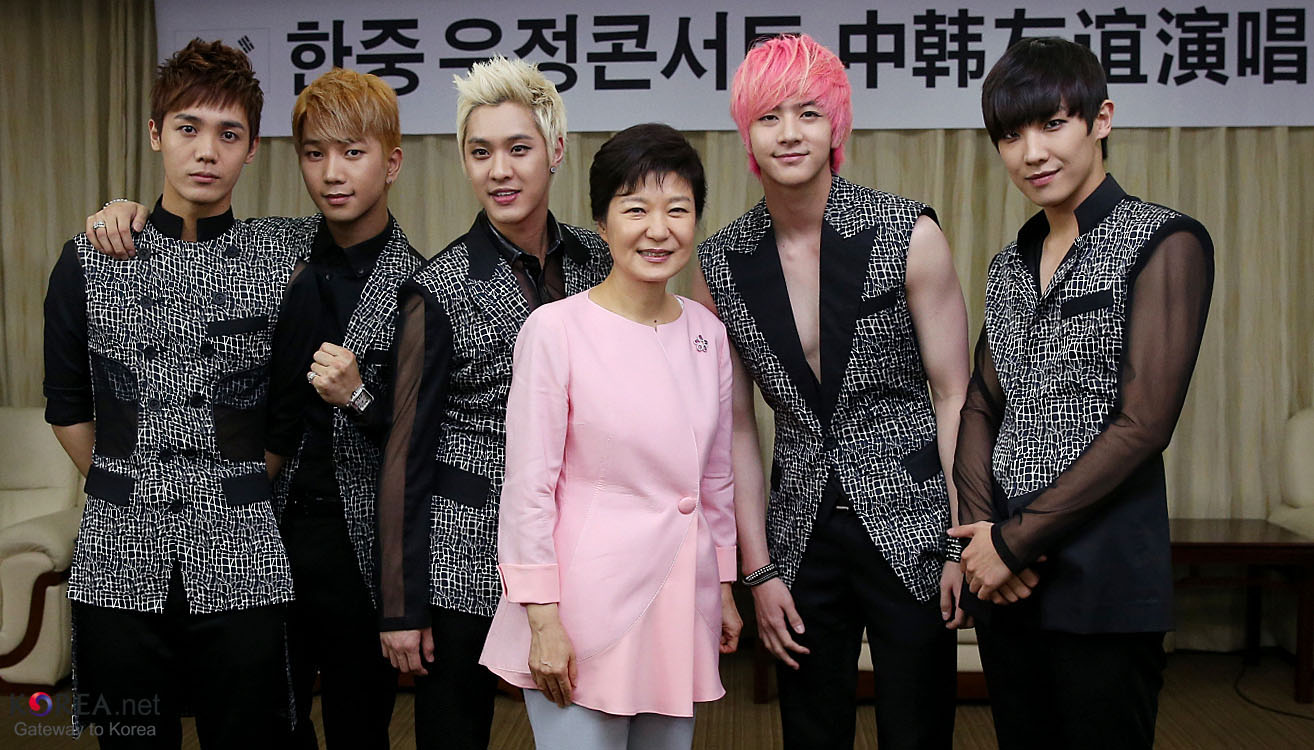 A whole new bewitching Korean soap opera has completely redefined horizons for many K-drama fans worldwide. With unthinkable plot twists and a cast like never seen before, this scandalous reality series is fast-paced, provocative, and painfully nonfictional. Just in case anyone has missed it, here is an exclusive sneak-peak before the upcoming season finale.

To put the story in a contemporary context, it’s apt to recall a recent November evening, when the media and people around the world watched on in disbelief as America’s first major party female presidential candidate failed to break past the “highest glass ceiling.” Many have interpreted her defeat as an irrefutable manifestation of sexism innate in today’s society: for some it was a complacent acceptance of a different, yet another, male leader, and for others it denoted a big step back for gender equality in the modern political arena.

Now backtrack to three years ago, when 51.6% of voters in a relatively more patriarchal country South Korea elected their first-ever female President, Park Geun-hye. This concluded a similarly close and contentious race against her male opponent Moon Jae-in, who won the other 48% of the popular vote, at a remarkably high voter turnout of 76%. Much of western media was quick to headline Park’s female status, watchful whether it would carry equal significance as it would in America.

In reality, Park ran on a campaign whose strategic significance, deliberate or not, came to be understood only recently. It narrated a different story from that of a traditional female politician running for office: it highlighted Park’s competitive advantage as a single woman orphaned by her parents’ assassinations and estranged from her siblings, tying her filial duty only to the nation’s welfare. On the other hand, her campaign had muffled her from anything that would accentuate femininity or feminism to her conservative, patriarchic audience, except self-labelling herself as the “Ready Female President” to underscore her ostensible revolutionary spirit. Realistically, Park was almost always portrayed through the prism of her late father and dictator Park Chung-hee’s legacy, as someone who could likewise be capable of revitalizing the country’s then stagnant economy. Granted, there were other significant factors swaying the public pendulum, like her party’s less pro-North stance compared to that of Moon’s in light of North Korea’s artillery attacks just two years before. Overall, her representation of women was never strategically employed to play to her political advantage.

Fast forward to November 2016. During Park’s administration, South Korea’s gender equality ranking in the world fell by 5 places (from 111th to 116th out of 144), the wage gap between men and women has widened each year, and the legislative assembly recently moved to further criminalize abortion. Then a corruption scandal constituting every element and drama needed to resemble a reality TV show goes viral – some of the buzzwords including gambling, slush funds, a gigolo, plastic surgery accusations, a lot of Viagra, and a lot more money. At their centre is a woman named Choi Soon-sil, the daughter of a man Park considered her late mentor from youth, Choi Tae-min. An American diplomatic cable from 2007, leaked by Wikileaks, said, “[Park’s] opponents characterized [Choi] as a ‘Korean Rasputin’, and [he] controlled Park during her time in the Blue House when she was first lady after her mother’s assassination.” As the pseudo-pastor of a self-founded shamanistic cult, Choi is believed to have exercised considerable spiritual control over Park, to an extent Park’s siblings wrote a pleading letter to Roh Tae-woo who succeeded Park senior’s military junta, to “save” their sister.

Following Choi’s death, his daughter Choi Soon-sil had dictated every aspect of Park’s life, ranging from designing her attire to editing legislature and speeches, including the famous Dresden Doctrine. This web of a scandal became untangled when it was discovered Choi Soon-sil and her daughter Chung Yoo-ra had enjoyed lives of royalty under Park’s protection. An investigation had discovered that Chung had received preferential admission to one of the most prestigious universities in the country, owned slush funds supplied by donations from conglomerates like Samsung, and had had judges who gave her low scores at equestrian tournaments taken in by the police. Despite Park’s lack of family, the Office of the First Lady had in fact continued to exist for these two democratically illegitimate, politically irrelevant women. As one of Korea’s biggest annual events – the college entrance exam – was approaching, Chung’s role in the scandal became the biggest gossip in the nation.

Corruption is nothing new to many Koreans. Park’s male predecessors have almost all been accused of petty to heavy corruption, and this was one of Park’s selling points: she had no visible family or secondary interests to entice her to corruption. Naturally, such history had bred a culture of political desensitization in Korean voters, who tend to vote according to their regional party preferences over individual candidate’s platform. To a public so desensitized, this bizarre precedent entails more than just a distant criminal conspiracy in the news. The mayor of Seoul recently posted a rather comical Instagram of an elementary school test asking to name “what arbitrates the government’s plan on how and where to spend the national budget.” In the picture, a student had honestly answered, “Choi Soon-sil.” This is no longer amusing once its significance is understood: a scandal of such magnitude and publicity has the potential to leave enduring, unchecked impressions on the Korean youth and those who are politically apathetic. What’s alarming on this account is today’s rhetoric used by the public, politicians, and even Park herself, in their failure to draw the line between being the first-sitting president to be prosecuted and being the country’s first-ever female president.

After refusing to be summoned for a face-to-face questioning, her lawyer Yoo Yeong-ha pulled Park’s “woman card” for her defence, arguing that she was “a woman before being president” and that her “privacy as a woman” should be respected. Yoo’s victimization of Park under the umbrella of woman was probably intended to win sympathy from Korea’s nascent feminist movements, but this comes at a very heavy cost for the latter. A couple of K-Pop artists have jumped at this opportunity to release their rendition of this opera’s soundtrack, except they used sexually derogatory terms as ‘bitch’ to allude to Park and Choi, diverting attention from the actual felony to their characters’ sexualization. Many women have voiced concerns about increasing sexual offences, especially during the weekly protests, which frighteningly resembles the rise of hate crimes in the United States in light of its recent election. Especially for South Korea, whose politics are often about personalities over policies, Park’s precedent can foster future resistance to women in high offices. Already, the leader of the third biggest party (who ultimately determines a majority decision in the national assembly), has openly said in an interview, “[South Koreans] shouldn’t even dream of having a female President within the next 100 years.”

Shining a light on the gender issues of this multidimensional state of affairs is not to sympathize with Park, denounce the legitimate public protest, nor belittle its other ramifications. However, gender discussions should no longer be trumped by the so-called greater good of democracy, which has been often crowned as what is more urgently at stake. Currently Park’s public approval sits at merely 4%, and she announced yesterday that she will “leave to parliament everything about [her] future including shortening of [her] term” once the parliament figures out her ‘exit plan’, which could take months. Given the pace and intricacy of plot development, this season of political drama could introduce more new episodes before its finale, presumably what Park wants to fend off for the time being.

Some insiders say so far has just been the tip of the iceberg: there are “sex tapes” and “drug allegations” waiting to be publicly disclosed. In other news, rumours about who will fill the power vacuum gain momentum everyday: there are talks of UN Secretary General Ban Ki-Moon returning to Korea upon completion of his term next month as an opportune Presidential hopeful for Park’s conservative Saenuri Party. Rest assured, the upcoming election fortunately promises better qualified candidates, but as expected, there isn’t a strong female contender. The aforementioned remark by a male politician is crude but valid: Korea may not see a female president for a while.

This season of K-Politics marks quite an unprecedented turn in the country’s history and politics. The coming year is ironically the 30th year anniversary of South Korea’s instalment of democracy, which coincides with the overthrow of the military junta led by Park’s late father. And lest we forget – consequences of an a priori democratic decision to oversee blatant warnings of incompetency will not be exclusive to South Korea.

***DISCLAIMER: The specific K-Pop group shown in this article’s featured photo is entirely irrelevant to the article’s view or content. The person in bright attire in the centre, Park Geun-hye, is not part of the idol group and is the article’s protagonist. Photo credit to Flickr Creative Commons.