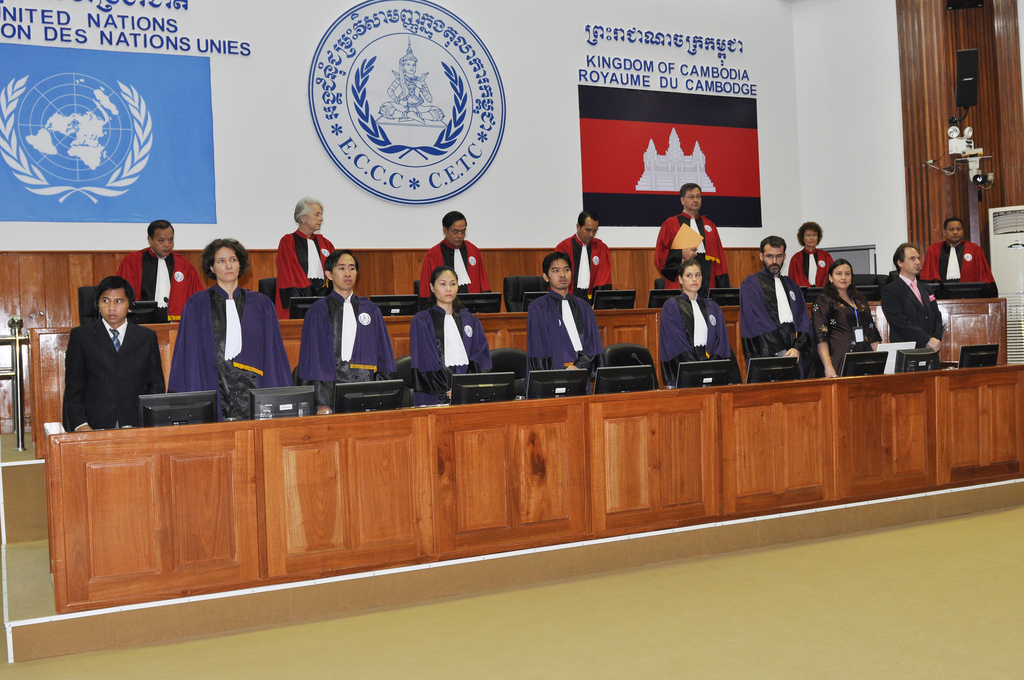 On August 7th 2014, Khieu Samphan and Nuon Chea were sentenced to life imprisonment by the Extraordinary Chambers in the Courts of Cambodia (ECCC). The two men were top-rank officials of the Khmer Rouge regime in Cambodia (1975-1979), and were hence found guilty of crimes against humanity perpetrated against the Cambodian people as reported by the ECCC’s website.

To put things in context, the Khmer Rouge, under the leadership of Pol Pot, came to power in 1975: their first order of business was the relocation of the entire population of the capital Phnom Penh and other cities to the countryside, in an effort to purify the nation. Following the grand lines of Maoist ideology, the regime believed that the peasants were the future of the country. As such, everyone should experience their lifestyle. This political ideology also included the executions of intellectuals as well as other potentially threatening classes to the regime. Mass displacements all over the country followed, along with mass killings. A large and extensive literature, including first-hand accounts, is available from both Western as well as Khmer authors for those who wish to learn more about the genocide and the Khmer Rouge regime – see for example “First They Killed My Father” by Loung Ung, and “Stay Alive, My Son” by Pin Yathay. Eventually, the Vietnamese forces ousted Pol Pot and his regime in 1979. Yet strongholds remained throughout the majority of the 1980s and 1990s and it is believed that some are still present, although the extent of their influence is arguable.

Existing literature on authoritarian regimes and the transitions they spur has sometimes brought up the problems that previous regimes’ actions pose for the installment and consolidation of democracy. For example, O’Donnell & Schmitter, in their seminal work Transitions from Authoritarian Regimes: Tentative Conclusions, mention that it is essential to put “those accused of gross violations of human rights under the previous regime” on the stand when said violations have been extreme.[1] Furthermore, they argue that “transitional actors must satisfy not only vital interests but also vital ideals – standards of what is decent and just”.[2] It can easily be argued that the case of Cambodia ranks on the extreme side of the spectrum. It is hence highly significant and constructive for the ECCC to be conducting trials with the hope of fulfilling ideals of decency and justice: i.e. holding accountable those responsible for wiping out an entire generation of Cambodians, causing more than 50% of the population to be under 25 years old today.  Of course, this work is part of a literature which is inherently state-centric and, as such, the actual implications of their claims for a country such as Cambodia and its future are contingent upon a number of other factors.

Among said other factors is the importance given to strengthening the rule of law in post-transition countries. This concept has primarily been defined in political science as the opposite of rule by law, which is characteristic of most authoritarian regimes. The principles inherent to the rule of law include legislative supremacy over political affairs, as well as accountability of every citizen to the law, here understood as a defined sets of rules and norms that all members of society agreed to give their tacit consent to upon joining. Given the extensive level of corruption pervasive in most if not all political institutions of Cambodia, the judiciary apparatus’ legitimacy is also greatly precarious: the ECCC’s website itself notes the “weakness of the Cambodian legal system”. It is in this framework that the potential benefits of institutionalizing accountability for crimes against humanity during past regimes become tied to the institution of democracy as a whole. Indeed, spillover mechanisms can help project newly found legitimacy onto, in this case, the present Cambodian judiciary.

This could also be strongly beneficial for the Cambodian state as a whole. Indeed, the Khmer Rouge regime’s legacy is one of general mistrust towards any and all institutions on the part of the people. I saw this first-hand when, while working at a social entreprise in Cambodia this summer, my colleagues came off as completely disillusioned with the political process as a whole, easily seeing Cambodian NGOs as easy prey for cooptation. Moreover, they constantly referred to the lack of accountability of their government and the inability for real change to take place as well as the dangers attached to voicing such opinions. However, while the general understanding of a humanitarian court is that it can rebuild a nation and reinstate trust in the polity, the dormant opportunities inherent in the Cambodian case have been argued by some to be hindered by the nature of the ECCC. Being a hybrid court, the UN’s involvement in providing help to run the court and pass judgement can go a long way in impeding local courts’ agency.

This is especially relevant in today’s globalized world, a society that likes to cry out wolf when there seems to be too much foreign involvement favouring the Western ideals and modus operandus. For example, Le Monde points out that the International Court of Justice is often considered to have a strong bias in favour of Western powers. Necessarily, this view spills over to the rest of the UN, including – in the case of Cambodia – the UNAKRT (UN Assistance to the Khmer Rouge Trials). It would be substantively more helpful in the long term for the UN to truly assist Courts such as the ECCC in setting up and building the infrastructural capability to carry out trials. This would entail the UN removing itself once this has been achieved, leaving local courts responsible for the execution of such judicial undertakings. This would be an incremental step in building legitimacy for national legislatures as well as overall trust in the institution themselves.

There is also the ever-persistent stigma, result of a long period of colonization, of neo-colonialism: foreigners coming in to “help” but doing so in a way that is both patronizing and harmful in the long term. This summer, I met a German legal advisor and an American human rights law expert. Feeding into this characterization of “the West”, both told me that they saw local Cambodian personnel as inexperienced, in need of leadership, and unable to think longer than a few years into the future. This is an ever-pressing issue as it negates the idea that courts aiming to confront issues tied to past authoritarian regimes can help rebuild a fragile state as well as reconcile a population. Yet the entrenched discourse that developing countries simply cannot go on without foreign assistance is in itself an ideological barrier on the road to regime consolidation and societal stability.

The ECCC is just a current example of a developing country trying to move forward. There are many others, whether they be courts or general efforts to attain total sovereignty (independent of foreign aid). While this article seemingly paints rather dark strokes on the whole matter, the battle on the ground carries on and such entreprises should be optimized. In the case of Cambodia, the ECCC’s potential as a building block for a future democratic undertaking should be highlighted. The fact that it was able to sentence two top leaders of a previous regime, which wiped out a major part of the population and displaced the rest, should not be underplayed. It is a huge victory for justice everywhere, whether that justice is understood as local or international, or concerning itself with crimes against humanity or general accountability for disregarding laws. It is however time to operationalize that victory into more substantive outcomes, such as a legitimacy campaign for and a formal restructuring of the Cambodian legal system. The role of foreign powers in the matter should also be questioned: it has always been taken as a given that it is a necessary variable for a successful outcome in a country without a democratic past to rest upon. Yet Cambodia would benefit much more in the long term from a judicial initiative that acts on behalf of the nation and for the nation.