“You are gilets jaunes!” 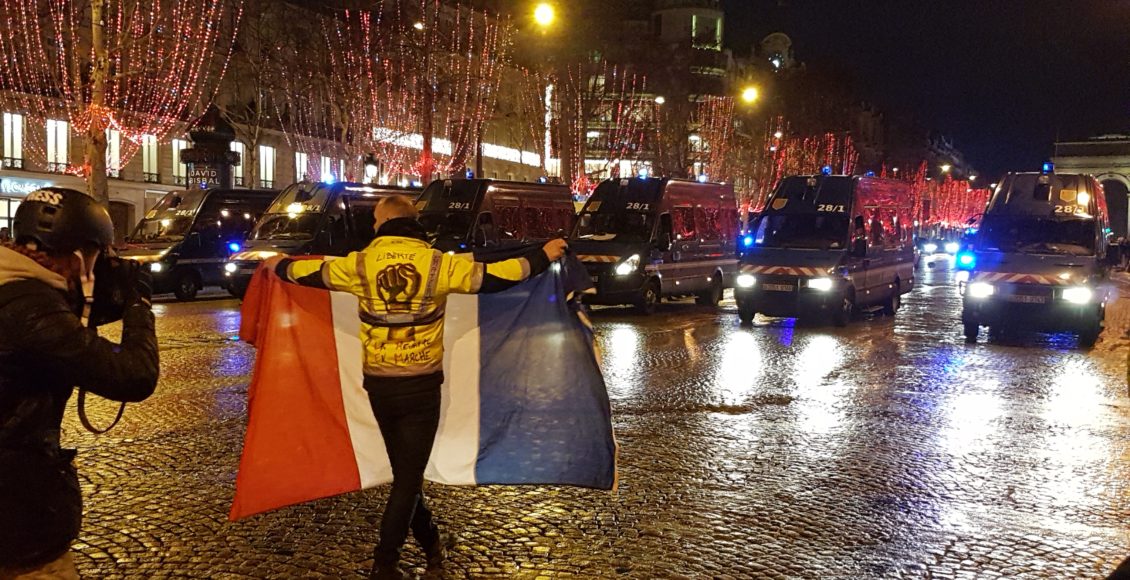 I was on the Avenue des Champs-Élysées in Paris when the first van filled with riot police came hurtling down the boulevard.  Then, like the floodgates had been opened, several armored vehicles followed in a procession that extended for several blocks. Each was filled with a team of heavily-armored riot police, that looked completely out of place on the cosmopolitan streets of the city.

Since November, France has been in a state of crisis. In what began as disjointed and unorganized protests against increased taxes on fuel have evolved into something more, a manifestation of people’s anger towards austerity, income inequality, and economic instability. Likewise, as the goalposts have been moved, the protests have spiraled into an all-out civil unrest that has spread across the nation. Paris, no stranger to urban upheavals and riots, has witnessed much of the civil disobedience. Images of burning cars, smashed windows and improvised barricades on the city’s streets have made the rounds the world over.

I was therefore unsurprised when I saw the first dozen riot police officers march down the boulevard on the evening of December 22nd, 2018. What left me in a state of shock was the extreme severity and military-like precision with which the police cracked down on protestors.

I followed the vans as they drove up the Champs-Élysées boulevard, as the procession made its way to the mass of protestors. When the first row of vans came within a block of the gilets jaunes (yellow vests), the armored police poured out, and quickly formed a line that stretched the width of the boulevard. They interlocked their shields and began to march at a slow pace towards the demonstration. Leading the charge were two large, white, and tank-like vehicles equipped with water canons for crowd control.

I followed closely behind the police, keeping my distance, but walking at the same pace. On the sidewalks, tourists and holiday shoppers looked on the police with fear and awe. Others began to follow along with me, filming the police and posting to social media as they walked. It was clear to me that many were anticipating the inevitable violent clash with a morbid curiosity.

The line of police officers eventually came to a halt. A 10-metre no-man’s-land lay between the protestors and the shields, nightsticks, and tear-gas launchers of the riot police. A police officer turned, removed his mask, and began to yell at the shoppers, tourists, and journalists that came to watch the tumult.

“Stand back!” the officer cried out. “Get out of here!”

Although a handful of onlookers obeyed, the majority remained.

“je vous avertis, ils lancent des pavés!” (“I am warning you, they are throwing paving stones!”)

Still, the crowd of tourists remained. One man, wearing a helmet labelled PRESS, tried to get closer to the police. They officer who yelled at us turned to the man, and pushed him aside.

Behind the police line, the gilet jaunes were getting restless, and did not relent. Although the majority remained huddled together, keeping their distance from the police, a handful were bolder. Their faces covered with black cloth masks, these men pointed at the riot police, and beat their chests proudly. Still, no stones were thrown.

From my vantage point, it was the police that shot first. From the mass of protestors, I heard the first explosion go off. Then, as if from no where, a huge cloud of white smoke enshrouded the gilets jaunes, completely obscuring them from view. I was blinded from the action as several other explosions went off, further obscuring the demonstration from view. Then, as though with one voice, the crowd coughed and yelled out with agony, as the tear gas entered their lungs.

In the panic, protestors fled the scene, desperate to get away from the burning gas. Suddenly, a gust of wind came down the Champs-Élysées, blowing the gas towards the police officers and crowd of curious onlookers. The police, prepared, equipped their gas masks. However, the unsuspecting and unprepared crowd of tourists, shoppers and journalists received the full brunt of the gas’s effects. I covered my face with my scarf, but still the gas seeped through, creating a sensation that could only be described as burning behind my eyes and inside my nose and throat.

As more and more protestors fled the scene, some were chased down side streets and alleyways and arrested by squads of riot police. In the alleys, gilets jaunes with red crosses on their vests tended to the injured, administering treatment to those most impacted by the noxious gas.

Only the most dedicated protestors remained in the crowd. It was then the police began to use their powerful water canons, further dispersing the crowd as the pressure of the water knocked demonstrators off their feet.

When only a few protestors were left, the police line and entire procession of vans began to advance up the Champs-Élysées. It was clear that this would be the end of the demonstration. Wanting to get a better vantage point, I followed a journalist through the crowd of onlookers and cut through the line of police officers. I was no longer an onlooker, but now in the centre of the demonstration.

From my new vantage point, I could see that not only had the police driven up the Champs-Élysées boulevard but had also circled around l’Arc de Triomphe and were making their way down the boulevard as well. The police had completely encircled all those that remained to protest.

From both ends, the police lines kept advancing. 30 metres separated both lines of police, with all remaining protestors caught in between. The police cried out, threatening that all remaining in the circle by the time both lines met would be arrested. This prompted most demonstrators to leave. In the end, one man stood alone in the center of the street, facing several dozen police officers on both fronts. He wore a yellow vest, on which he had crudely written in sharpie “la révolte en marche” (the revolt on the move), a play on the name of Emmanuel Macron’s governing centrist party’s name (la république en marche).

“Reculez!” screamed the man (French for “retreat” or “go back”) at the police officers that came at him from both sides. Nonetheless, the police continued to approach steadily, the man matching their pace as he walked backwards.

Eventually, both lines of police officers met. By that point, I had fled the scene, putting my arms up as the police allowed me to cross the line. Within a matter of minutes, the French state had managed to end a day’s worth of demonstrations. Many gilets jaunes remained scattered across the Champs-Élysées boulevard, sitting on benches, gossiping, and drinking cheap beer as they wandered. Although a critical mass of protestors remained, it was clear that there would be no further demonstrations today.

The gilets jaunes movement is one with no clear leadership and no clear demands. This makes the movement a very dangerous political animal, as the leaders of the fascistic Rassemblement National party have sought to coopt the movement. In many ways, the movement is another manifestation of the wave of populist politics that have swept across Europe.

But to look at the gilets jaunes movement from that limited analysis leaves much to be desired. The demonstrators are largely working-class French citizens, who feel both alienated and victimized by globalization and financialization. These fears and concerns are valid, but are unfortunately too often preyed upon by far-right political organizations.

Looking past this, there is a deeply-rooted and legitimate anger that fuels these protests. People are marching and rioting in the streets not out of hatred, but because their faith in fundamental institutions has been shaken by years of watching democratic mechanisms and the welfare state crumble around them.

Furthermore, as the protests continue, democratic institutions fall apart in front of the eyes of demonstrators. Consider the military-like precision by which the French police cracked down on protestors. Consider the use of tear gas, a violent suppression tool that not only affected protestors, but innocent bystanders as well. This level of brutality against citizens ought to never be accepted in a democratic society.

Working French citizens feel as though the state no longer acts in their best interest. Violent crackdowns by French police will only further this loss of faith.

As I made my way back to the centre of Paris, pockets of protestors and police officers remained scattered across the boulevard. Suddenly my attention was grabbed as a woman began to yell at a group of police officers I had just passed:

The group of officers looked on the woman, stoically. The woman relented.

“Is this right what you are doing here?”

“You are gilets jaunes!”