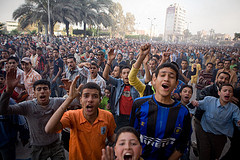 Instead of doing one long overview of labour movements in developing countries I have decided to zoom in to a particular conflict between workers and their employers in a particular place for the next few posts. The situation is not homogeneous for all countries and it is important that I should not treat it as such. For this week, I will be briefly looking into the Malhalla factory strikes currently going on in Egypt as a good example of labourers standing up to unjust employers.

First, is Egypt considered a developing country? Depends how you define it. If you look at it as a strictly monetary value then yes. According to the World Bank, all low- and middle- income countries are seen as “developing”. In a 2008 study by the World Bank, any country with a GNI (Gross National Income) per capita under $US 11,905 is considered developing; Egypt’s is $1580. You can measure how “developed” a country is by a plethora of statistical means: infant mortality rate, GDP, life expectancy, literacy rate and so on. Ho 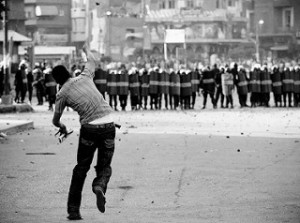 wever, I do have a problem with the term. The term assumes that countries are “developing” towards a Western economic model that is supposedly superior, making those states that have been labeled “developing” inferior. Cuba for example has traditionally (perhaps it is changing a little now) not followed this model of Western economic development so is still considered a developing country even though its infant mortality rate is lower than the US’s and literacy rate is higher. Regardless of my opposition to this term however, it is the language used by many so I will stick to it as I find it still far better than the term “third world country”.

As I wrote earlier, the situation is not homogeneous and it would seem to be so for the case of this country. Egypt actually has a long history of labour dating back to the early 20th century, being one of the oldest working classes in the region and was also instrumental in the fight against colonialism. The Egyptian working class has often fought tirelessly in the region throughout the twentieth century against the plague of despotism and neoliberalism, here is a good and brief history of Egypt’s working class. Even though the labour movement has a long history it is still a struggling one that has a government that is weak (or unwilling rather) in enforcing law or policy, like raising the minimum wage- one of the demands during the 2011 revolution.

The factory workers in Mahalla actually have a strong history of grassroots labour activism, having a mass strike in 2006 and even triggering a general strike in 2008 which was squashed easily by the Egyptian authority as there are heavy restrictions on strikes in Egypt although they are not fully illegal under the 2003 Labour Code. Regardless though it was still a valiant effort in the face of corruption and despotism.

Recently, however the workers in one Malhalla factory have gone on strike, protesting peacefully.The strikers at Holding Company for Spinning and Weaving have organized sit-ins to protest the suspending of their 10% bonus, which was promised by President Abdel Fattah Al-Sisi last month. They also requested for the factory to subsidize them for the meals they have lost while on strike. The bonus only amounts to 50 EGP per person about 6.23 in US dollars much less than the strike is costing the factory. The strikers are facing harsh opposition however as the Minister of Manpower (yes that is his real title), Gamal Sorour has threaten to fire all employees who are currently on strike… All thousands of them…The strikers are holding on however and still striking.

The 2008 general strike triggered by the workers is seen to be one of the precursors of the 2011 Revolution in Egypt. The textile workers of Mahalla have shown themselves to be a force to be reckoned with if not treated justly, perhaps the government should listen to their demands.

That is just one way workers of the world are fighting the wrongful practices of their opressive and unjust employers. Stay tuned for my next post where we will stay in Africa and look at how other grassroots labour movements fare in “developing” countries on the continent.