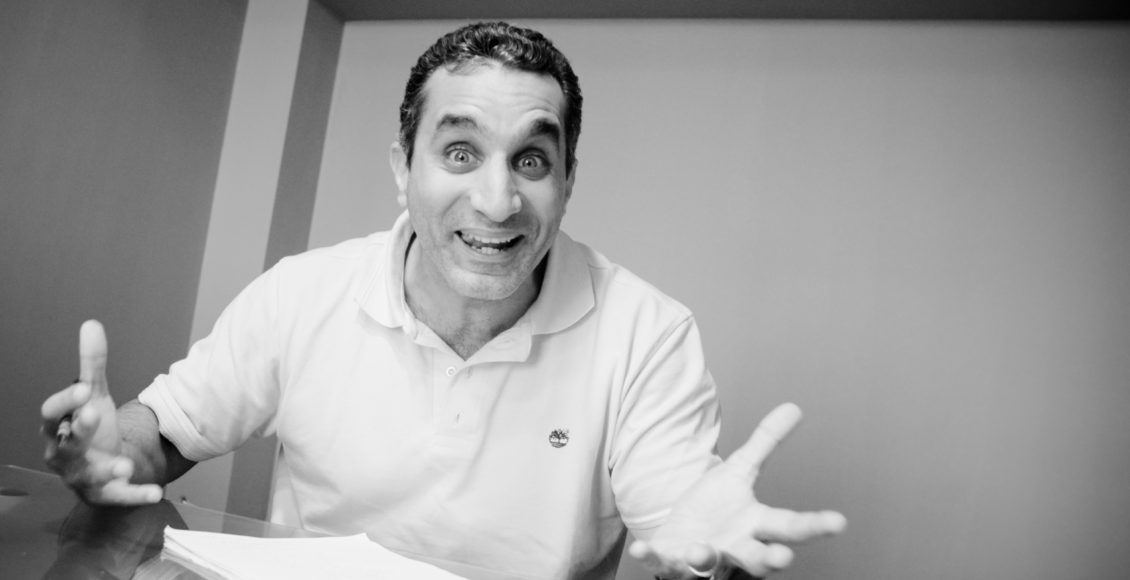 The right to laugh at one’s government is a core political freedom. Mocking a larger-than-life political leader can shrink them down to their humanity and laughter can make dark circumstances more bearable.

No one exemplifies the power and danger of political comedy more clearly than Bassem Youssef. Often called “the John Stewart of Egypt”, the heart surgeon-turned-comedian, Youssef first rose to prominence during the 2011 Arab Spring when he began filming and posting Youtube videos from his laundry room satirizing government coverage of the protests. He quickly gained popularity.

After the Mubarak regime was overthrown, Youssef was given his own TV show in Egypt modeled after the American Daily Show, which at its height reached 30 million viewers a week. This marked a dramatic shift from the Mubarak era when government satire was non-existent. Youssef continued to criticize and satirize the Muslim Brotherhood government who rose to power in Egypt’s young democracy. In his book, ‘Revolution for Dummies: Laughing Through the Arab Spring’, Youssef wrote that his viewers “watched us because they saw hope in the show — hope to challenge long-standing taboos and authority, whether that authority came in the form of a beard, or a tank, or a codger demanding, ‘Respect your elders.’” Through his comedy, the image of a government that is all-mighty and all-controlling was challenged. However, his comedy did not receive a positive response from the Muslim Brotherhood government who arrested Youssef for insulting Mohammed Morsi and Islamic leaders in the Muslim Brotherhood. After the overthrow of the Islamist government and the institution of military rule under al-Sisi, Youssef received death threats and fled the country. Youssef’s story demonstrates the power, and the risk, of political comedy in a world where there are harsh expectations about the portrayal of the government in the media.

It is examples like Egypt that make the plethora of political comedy that exists in the United States so impressive. On American television since 1975, Saturday Night Live has parodied and mocked political officials with varying degrees of success. Following the example of Jon Stewart and his groundbreaking comedy news show the ‘Daily Show,’ late-night hosts like Stephen Colbert and Seth Meyers give monologues of headlines and one-liners of the funniest tidbits of today’s news; John Oliver does more in-depth, twenty-minute long episodes about one topic on HBO; newcomer Hasan Minhaj has brought political comedy to the streaming world with his new straight to Netflix show ‘Patriot Act’, and many other comedians host shows mocking the news. Clearly, American television provides viewers with ample time to laugh at its politicians. Almost too much. I, for one, can’t keep up. These comedians do good, important work and the fact that there is so much room for comedy in the United States is a positive sign about the health of its democracy. However, a wealth of political comedy comes with its own challenges.

In his tenure as host of the Daily Show, Jon Stewart was adamant in reminding critics and fans alike that he was not a journalist but a comedian. In fact, a great deal of his criticism was aimed at the American news networks and in particular their propensity for generating fear and confusion through the 24-hour news cycle. Stewart also saw himself a cultural critic who brought the important headlines to his viewers by pointing out the hypocrisy in politicians and news anchors. This is an important role for the political comedian to play. This is the role that Bassem Youssef sought to play with his mocking of Mubarak propaganda. Keeping the government and the news honest and making people laugh while doing it is increasingly important in our dark political climate. However, when there is so much political comedy available, and it is so much easier to enjoy than traditional news, political comedy risks becoming a news source for viewers.

A large problem with the conflation of political comedy and news is its contribution to hyper-polarization. Clearly, America has a problem with polarization. Half of the country was shocked and horrified by Donald Trump’s election to Presidency, while the other half enthusiastically voted for him. When much of America feels so disenfranchised by traditional media and political elite that they will turn to an unsavory populist leader and news sites – with a dubious attitude towards facts – there is clearly a disconnect between one half of the country and the other. This feeling of detachment is not aided by the feeling that wealthy, educated Democrats are laughing at Trump voters. This feeds into Trump’s narrative of a ‘media elite’, deeply partisan and so biased against him that his supporters should ignore everything they say.

There is no easy solution to this problem. Political comedians should not stop mocking the increasingly disturbing, but also somewhat hilarious, actions of the United States’ Commander in Chief. Perhaps current political comedians should take another lead from Jon Stewart and make an effort to appear on networks such as Fox News for discussion and debate. Greater interaction between disparate media sources could create a greater sense of communication between disparate portions of the American population.

Another problem with the rise of political comedy is the disproportionate amount of time it spends on what is funny instead of what is important. For political comedians, politicians like Donald Trump who seem to do more ridiculous things everyday provide enormous fodder for jokes. It’s hard for a comedian not to get caught up in all the little things that Trump does, often when he hopes to distract from the major ones. Trump’s media strategy has been to give them so much material that the many things he does can never get more than a couple days of attention, and every story that could’ve ended a previous presidency becomes a blip in his. Political comedians play perfectly into this strategy, where every action becomes a one-liner or a sketch with new material for next week.

However, in some ways, in the age of Trump political comedians have taken more responsibility for their views and their powerful platforms. Comedians have become more prone to a serious tone around topics such as healthcare and family separations, and have attempted to use their influential positions to enact real change.Samantha Bee hosted ‘Not the White House Correspondents’ Dinner’ to raise money for the Committee to Protect Journalists. John Oliver ran ads on Fox & Friends aimed directly at Trump himself in an attempt to educate the President on issues from clean coal to the dangers of repealing Obamacare.

Also, under Trump, the freedom of the political comedian to attack the government without censorship feels more fragile than ever. Trump is deeply uncomfortable with being mocked. He has not ever attended the White House Correspondent’s Dinner, a traditional dinner where the White House and the press tell jokes about each other which has been attended by nearly every sitting president since President Calvin Coolidge in 1923. Furthermore, most recently, White House Correspondent Dinner host Michelle Wolf received intense criticism for her speech. She harshly reprimanded the administration and the press, and was criticized for lack of civility and, in particular, possible references to Sarah Huckabee Sanders’ physical appearance. Trump’s response to the speech, calling Wolf “filthy” and the White House Correspondent’s Dinner “DEAD” and “FAKE NEWS” was particularly disturbing. Though the controversy around the Dinner did not derail Wolf’s career and she began her Netflix show The Break soon after, it still marked an important shift in the White House attitude towards comedians. This coming year, the White House Correspondent’s Association has given in to pressure from Trump and chosen a historian, not a comedian, to headline the event. Perhaps Trump just can’t take a joke, perhaps Americans should be looking at countries like Egypt where comedians flee for their lives, and vehemently protecting their own right to laugh.

At a time when freedom of press is increasingly under attack in America, it’s important to remain grateful that political comedians exist and persist in doing the all-important job of making the American people laugh when so much of the news seems so dire. However, it’s also important to be discerning of political comedians. After all, if they’ve taught us anything, it’s that no one is above criticism.