Lessons from Romania: How to Start an Anti-Establishment Revolution the “Right Way” 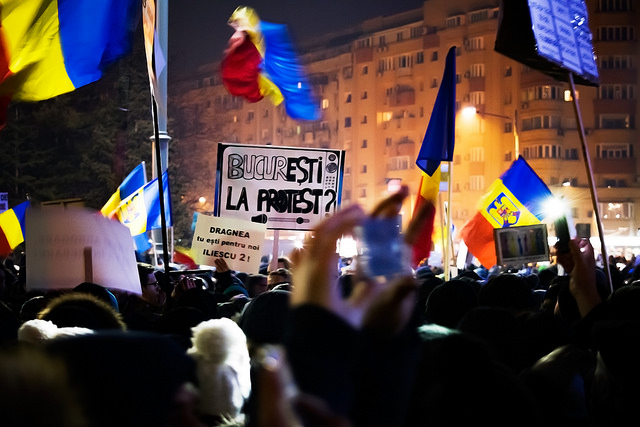 “If only the United States could learn from Romania”. This is what many are saying following the successful protests by the Romanian people against their newly-selected government. The populist movement that has emerged since the end of January arose out of discontent toward federal decrees passed to pardon abuse-of-power crimes along with the amendment of the criminal code to reduce penalties for them. Statements from the Romanian government claim that such measures are necessary with regard to its role as a member of the European Union which requires it to reduce the burden on prisons that are overflowing. Through the planned decrees, the government would be removing non-violent political prisoners so as to avoid fines for poor conditions from the European Court of Human Rights. However, the ulterior motive lies in the fact that powerful politicians, specifically Social Democratic Party (PSD) leader Liviu Dragnea, who is believed to be pulling the strings behind his party’s current government, wishes to regain access to important political positions that they cannot under current anti-corruption legislation. So, for Dragnea to run for the Prime Minister’s office, as he has openly stated that he wishes to do, the government decrees simply must be upheld. Herein lies the current government’s first motive.

As Romanians are very well aware, Prime Minister Grindeanu was not elected but simply chosen by Dragnea on 27 December 2016, following the party’s victory in the 2016 Parliamentary Elections. Although Grindeanu may lead the government, but in the peoples eyes, he is simply a pawn of the wily Dragnea, a veteran of Romanian politics and business. Here arises PSD’s second motive for the decrees. The majority of the party’s funding comes from the country’s “local barons” who are Romania’s upper-class businessmen (like Dragnea) of which passing the anti-corruption legislation is of vital importance for their activities. To lose their backing would signal the collapse of the Social Democratic Party and likely the end of Dragnea’s political career. In a classic example of how there are always two sides to a story, for the first time in 2017 we find ourselves amidst a set of anti-establishment protests that, unlike those behind Brexit and the election of Donald Trump, are of the non-radical variety and a sign of positives that populism could have in store if applied in this way by the rest of Europe.

Being the largest protests that Romania has seen since the fall of communism that ended Nicolae Ceausescu’s reign in 1989, the people have decided to fight not for the removal of the status quo, but for it to simply clean up its act. The events over the last few weeks in Romania are a glimmer of hope for Europeans who still have faith in a unified Europe made up of citizens that value good governance. In fact, amidst the words of strong criticism that the European leaders, including Romania’s President Klaus Iohannis have unleashed upon the PSD government, accompanied by Grindeanu’s yield, it would not come as a surprise if one were to look back at these events as a key element in the revival of a European Union that teeters on the edge of collapse.

The ramifications of these protests go a long way in renewing hope that Europe has not completely succumbed to the anti-government wave that seems to have made its way across the Atlantic since the American presidential election back in November. Now, there are those who will not see the Romanian difference immediately. They will remain skeptical as to how this is not just another anti-establishment wave of the kind already seen in Italy and Austria in the past few months. The key lies in the fact that this is not an anti-government movement but an anti-Grindeanu/PSD movement.

Out of all of Europe’s nations, Romania has been one of the most highly plagued by corruption within politics and the economy. Thankfully, its efforts toward eradication have been greatly assisted by the faith that the Romanian people hold in liberal governance and the energy to fight non-progressives who hamper the country from advancing. If the Romanians are so liberal, some will argue, why are the people already protesting the government that they elected only one month earlier? As valid as this question may be, many voters were half-hearted in their decision to choose the Social Democratic Party, knowledgeable in its subpar transparency and possible connections with communists. Many chose it because they believed that going with the mainstream was safer than the barely two-year old Save Romania Union led by Romanian mathematician Nicusor Dan, which finished third and was the biggest surprise of the election. Although its platform is centred on rooting out corruption, their neo-liberal tendencies played on the lingering memories of a communist past that Romanians so deeply dread. Thus, the people took a chance on PSD with the possibility that it would play nice with the corrupt elites very much in mind. Much to the dismay of the nation this is exactly what happened, and it seems as if this first action is already the last straw.

While the government has now conceded that it was wrong in attempting to loosen anti-corruption laws, President Iohannis has called for a referendum on the issue, and it remains to be seen what Dragnea’s next move will be. Despite this state of limbo, it is safe to say that the people got their say and the government was caught red-handed. Romania has begun its anti-establishment wave not by seeking out radical politicians with experience in government (see Trump), but by challenging those in power to compel the elites into abiding by the rule of law. This major victory grounded on the old principle of participatory democracy, that the Romanians seem to utilize so well, is something that many other nations should take note of. One does not have to look extensively to draw up the parallel between the situation in Romania and that in the United States following the election of Donald Trump as President. Shortly after Trump took office, Americans are now faced with Executive Order 13769, the decree which temporarily restricts the entry of nationals from seven Muslim-majority countries and suspends the Refugee Admissions program. Something that is both blatantly unconstitutional and an infringement on basic human rights. In response, protests broke out across the United States condemning the President for an act that violates the principles upon which the Founding Fathers built the nation, but at this point it is too late.

While it may be futile to directly compare Romania with the United States on the grounds that the latter is much larger, more diverse, and functioning under an Electoral College, Americans could have taken a lesson from their counterparts on the art of civic engagement. Yes, Americans were unhappy with the Democrats and many sought change, but they did so in the wrong way. A nation should not seek the anti-establishment direction out of vengeance for a particular government that made it upset, it should work with it to make it better again. This is something that the half a million voices in Bucharest over the last few weeks completely understand, but something that many other nations have yet to comprehend. Europe and the world are in for a nightmare if they divide themselves among the extremes. If they begin to realize this in the months ahead and come back to the reality of rational politics, it is only fair to give credit where credit is due. And that credit certainly lies with the Romanians.