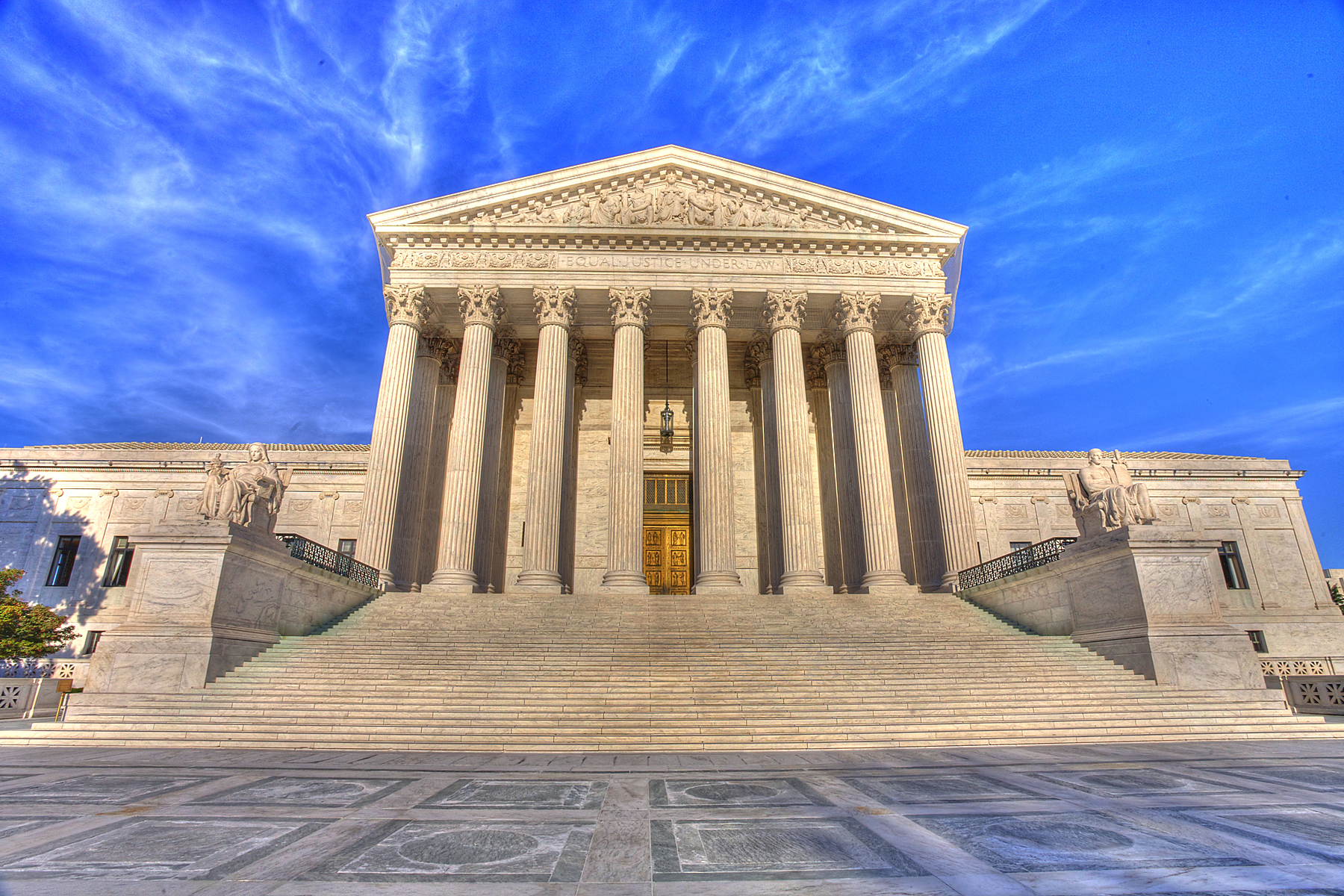 The Supreme Court of the United States. Photo by Mitchell Shapiro. https://flic.kr/p/afw61t
Share

On December 5th, the Supreme Court of the United States heard oral arguments for Masterpiece Cakeshop v. Colorado Civil Rights Commission. In 2012, Jack Phillips, the owner of Masterpiece, refused to bake a wedding cake for gay couple Charlie Craig and David Mullins. Phillips’ argument rests on his First Amendment rights of free exercise of religion and free speech. The baker claims that his cakes are an extension of his artistic expression, and that to bake a wedding cake for the couple would violate his religious beliefs on hetrosexual marriage. Phillips did offer to make any other kind of baked good for the couple, stating, “I’ll make you birthday cakes, shower cakes, cookies, brownies. I just can’t make a cake for a same-sex wedding.” The couple sued Phillips on the grounds that his refusal to serve them amounted to discrimination on the basis of sexual orientation. Under Colorado’s Public Accommodations Act, discrimination on the basis of race, sex, religion, or sexual orientation is prohibited in areas of “public accommodation”, including retail stores. In the lower courts, the couple won their case and Masterpiece was ordered to provide wedding cakes to same-sex couples. Phillips refused, dropped wedding cakes from his business, and took his case to the Supreme Court.

Phillips claims that being forced to make wedding cakes for a same-sex couples violates his rights to free exercise of religion and freedom of expression. For the couple, and for the Colorado Civil Rights Commission which ruled in their favour, the case revolves around discrimination. Their case rests on the notion that Phillips’ religious beliefs have no place in business, and that he cannot deny them service because of their sexual orientation. Phillips argues that he did not refuse to serve the couple entirely on the basis that they were gay, refusing only to make a wedding cake, which would challenge the couple’s allegation of outright discrimination. Should Phillips win his case, the Public Accommodations Act or segments of it may be struck down.

The Constitutional article in question is the First Amendment, which states “Congress shall make no law respecting an establishment of religion, or prohibiting the free exercise thereof.” Although the wording pertains to Congress, the 14th Amendment extends the Bill of Rights to states, meaning that the state is also prohibited from making laws which prohibit the free exercise of religion. On the other hand, state and federal governments are also allowed to make laws that may violate certain constitutional protections, if the Court finds that the government has a compelling interest in enacting the law. For example, in Korematsu v. United States, the Supreme Court upheld the internment of Japanese-American citizens during World War II. The Court found that the federal government had a compelling interest in protecting the country from potential espionage and sabotage by Japanese-Americans, and this interest was strong enough to validate internment and overrule the habeas corpus rights of the detainees. But the Court has also ruled against the government and in favour of individual freedoms. In Wisconsin v. Yoder, the Court ruled in favour of an Amish family who removed their children from the public school system to practice traditional vocational training. The Yoder family had been convicted of violating the state’s compulsory school attendance law, which mandated that children attend school until age 16. The state argued that they had a compelling interest in ensuring that children receive a certain level of schooling. It is clear that the state’s goal was positive, but the Court found that the interest was not strong enough to justify the violation of the Yoder family’s First Amendment rights. Masterpiece once again pits state interests against individual freedoms. Colorado claims that they have a compelling state interest to uphold equality in civil rights laws, which is certainly an important social goal. But will the Court rule that the state’s interest is more important that Phillips’ right to free exercise?

In the past, the Court has ruled that business-owners are entitled to incorporate free exercise into their businesses in Burwell v. Hobby Lobby. In 2014, Hobby Lobby Inc., owned by the Evangelical Christian Green family, filed a lawsuit against the government for violating their right to free exercise. Prior to the case, the Affordable Care Act included a contraceptive mandate, which required employers to provide female employees with certain forms of contraceptives. The Green family took their case to the Supreme Court, arguing that the use of contraceptives went against their religious beliefs, and being forced to provide them to their employees would violate their First Amendment rights. In a narrow 5-4 decision, the Court ruled in favour of the Green family and struck down the contraceptive mandate. This case bears close similarity to Masterpiece, and could serve as precedent to tip the court in Phillips’ favour. At the state level, however, similar cases were ruled differently. In Washington v. Arlene’s Flowers, a florist who denied a gay couple’s request to provide flowers for their wedding was sued by the couple and the state for violating anti-discrimination laws. The florist alleged that her constitutional rights to freedom of speech, expression, and association were violated by the anti-discrimination laws. The Court rejected this claim, holding that floral arrangements are not a protected form of free speech. A similar case, Sweet Cakes by Melissa v. the Oregon Bureau of Labor and Industries, in which another cakeshop refused to provide a wedding cake to a same-sex couple, resulted in the same ruling at the state level. The owner of Arlene’s Flowers has appealed the case to the Supreme Court, and the owner of Sweet Cakes has promised to do the same; the results of the two cases will effectively be decided by Masterpiece. These previous cases, along with Yoder, show that the Court has a strong record of affirming free exercise rights of individuals against state laws. However, they also prove that the Court tailors their decisions to the circumstances surrounding each case, and they are careful to define what constitutes protected forms of speech.

America’s relationship with religion is complicated. Formally, the country strove to keep the church and state separate; the First Amendment prohibits the establishment of a “state-church”, creating a constitutional barrier between the government and religion. And yet, in practice, religion seems a core part of American identity and culture, and one that remains significant in politics. 67% of Americans say that it is important for the President to have strong religious beliefs. The same survey found that 65% believe that liberals have gone “too far” in trying to keep religion out of the schools and the government, while 48% say that conservative Christians have gone too far in trying to impose their religious values on the country. Opposition to progressive social policies, such as gay marriage and abortion rights, is strongly rooted in religious beliefs. In every election since 2000, Christian and white Catholic voters consistently voted for the Republican candidate. This is no surprise, as a large part of the Republican Party platform revolves around socially conservative policies in line with Christian beliefs. These figures demonstrate that religion is hardly separate from the political realm; religion plays a significant role from campaigns, to party platforms, to policy-making. Despite formal – and Constitutional – commitments to secularism, it seems that religion is inseparable from American political life.

Masterpiece brings the culture war between conservatives and progressives to the forefront once again. In a Court comprised of four staunch liberals and four dependable conservatives, most analysts believe that Justice Kennedy will be the swing vote. Kennedy’s vote shifts from liberal to conservative, but he has historically voted with the Court’s liberal wing on issues of gay rights. Kennedy wrote the majority opinion for both Obergefell v. Hodges, which legalized gay marriage nationwide, and Lawrence v. Texas, which struck down sodomy laws to make same-sex sexual activities legal nationwide. However, Kennedy voted with the conservative majority in Hobby Lobby, suggesting that he is also sympathetic to freedom of religion rights. Kennedy was vocally displeased with the Civil Rights Commission’s statement which called religion “despicable” when being used to justify discrimination, stating “the state in its position here has been neither tolerant nor respectful of Mr. Phillips’ religious beliefs.” Ultimately, Kennedy’s strong record of voting for gay rights, which was not a core issue in Hobby Lobby, suggests that he will side with the liberals. Whichever way Kennedy falls, the repercussions from Masterpiece will not end with the Supreme Court ruling. There is growing sentiment among religious Americans that their way of life, and their fundamental freedoms, are under attack. Half of Americans surveyed believe that discrimination against Christians has become as significant of a problem as discrimination against other religious groups, while the other half disagrees. This fear has translated most visibly into support for hardline conservative politicians and policies to uphold traditional Christian values. A ruling in favour of the state will surely fuel this fear and future backlash, and foster further radicalization amongst American Christians.

At the same time, the Court is conscious that a ruling in Phillips’ favour could upend the progress made in civil rights laws, and open the path for more discrimination to occur, justified on religious grounds. David Mullins, one of the original plaintiffs from the case, worries what could happen if Phillips wins. He asks, “Could a business owner refuse to hire a single mother because their religion believes that mothers should be married?”, or “Could a hotel owner refuse to rent a room to an interracial couple because their religious belief believes that the races should not mix?” A win for Phillips would likely produce backlash of its own, especially amongst civil liberties and gay rights activists. The Court will have to deliberate between parties with equally fervent beliefs and highly compelling arguments. When the ruling is delivered sometime in June, the Court will indicate which direction they are pushing the country towards. The question which remains to be answered is whether the nation will follow peacefully, or not.

Habeas corpus: meaning “to have the body”, habeas corpus rights refer to individual rights against unlawful imprisonment, which are protected under the 5th Amendment of the US Constitution

State interest: the government passes laws or policy to address a public concern

Free Exercise clause: In the First Amendment of the Constitution, religious freedom is protected by 1) the Establishment clause, which prevents the formation of a state church or religion and 2) the Free Exercise, which prevents Congress from passing laws that inhibit any individual’s exercise of their religion

Burwell v. Hobby Lobby: Sylvia Burwell was the Secretary of Health and Public Services at the time that the Hobby Lobby case was brought to Supreme Court. Although she was named as the petitioner, she represented the federal government.