Looking for the American Dream

Journey in the heart of Houston 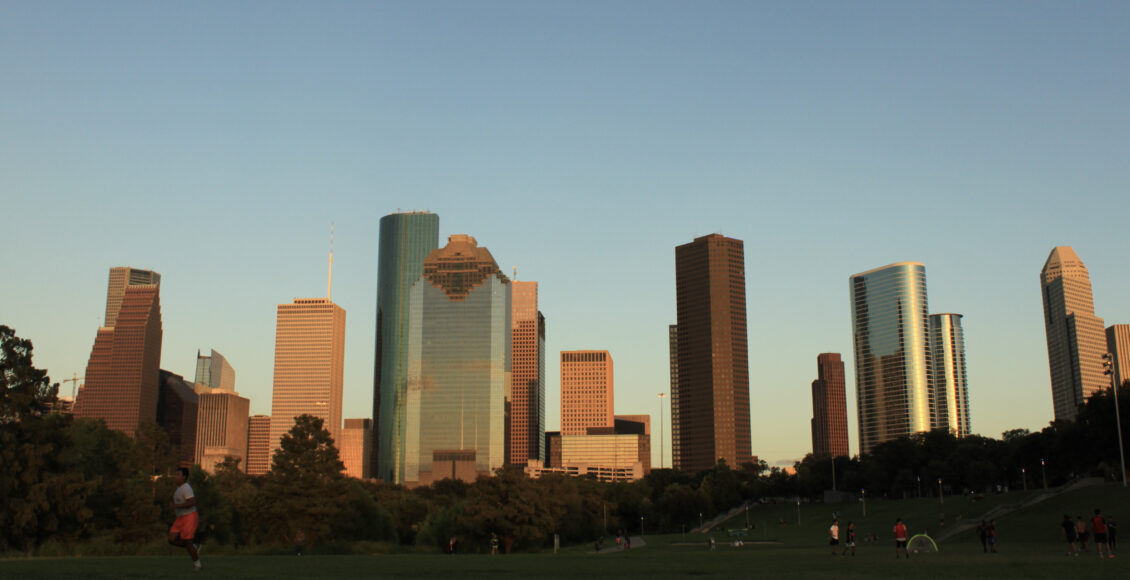 The names of the people interviewed have been modified.

English version of this French article.

At last, on November 7, after almost four endless days marked by a tedious vote count, America and the entire world can breathe again. Joe Biden will be president, and for the first time in history, a woman will work by his side as Kamala Harris takes her place as vice president-elect.

Kamala Harris reaches the podium before a vibrant and jubilant crowd, conscious of the glory she embodies with confidence. As the first woman of colour and daughter of immigrants to reach such a position, Harris represents greatness for many. Greatness of a dream, of hope, in a country that seemed to have lost it all.

Dressed in a pristine white suit, she appears on the screen like the new, yet empty first page of a book, the beginning and the end of a story that never stops: the story of the American Dream.

It’s 8:30 p.m., and I have already forgotten my noodles waiting on the side of the kitchen table as her address begins. I am still sitting on my couch, eyes glued to the screen, and the words of the vice-president-elect push my mind to travel away. Away, across the country of “possibilities,” the country that has been my home for the past 8 years.

As an expat since birth, I set foot in Houston, Texas, in 2012. The 28th state of the United States is a land of possibilities, which offers a host of resources to its population of nearly 30 million.

“Dream with ambition, lead with conviction.” Kamala Harris’ speech still echoes in my head. She urges us to dream and remain faithful to our convictions, to our own unique identities that define us as individuals. Kamala Harris represents difference and diversity as she pushes Americans and immigrants alike to pursue their wildest dreams. She values the sense of individuality that characterizes the unique journey of each on the road to the American Dream.

The expression American Dream is attributed to the writer James Truslow Adams, who, in 1931, in his work The American Epic, studies the notion of the dream:

“A dream of a land in which life should be better and richer and fuller for everyone, with opportunity for each according to ability or achievement.”

In a country where myriads of cultures coexist, Adams’ idea was that everyone is free to define their own American Dream.

This vision remains however very idealistic of what America is today. The America of today is the story of a nation that continuously reinvents itself.  A nation that represents both diversity and division. The America I know, is one of the poems that have defined my late high school years. From feelings of solitude expressed by James Baldwin to Rita Dove’s despair, while resenting Langston Hughes’ exasperation, the America I had discovered had never been the America idealized by the Dream.

Still, as my former English professors loved to remind me, literature often mirrors reality. Indeed, how trivial it might seem, nothing beats the reality of the ground, the reality that prevails in the streets, within each and every one of us. I had to look away and beyond my beloved poems to understand what makes the American Dream alive, today, in 2020. Thus, my journey begins.

Houston. Aside from its affiliation with NASA, people outside of America do not usually know much about it. Beyond its endless highways and few sky-scrapers, Houston is full of surprises. Different communities from all around the world coexist; African American, Hispanic, Asian, Arabic, European make Houston a cosmopolitan city. It was here that I decided to see if I could find expressions of the American Dream. And I did find it — twice. Two Houston residents were willing to talk to me about their definitions of the American Dream.

Vera was born in Mexico, on the other side of the border, but has lived in Texas since she was two weeks old. Her parents moved in the hopes of building a better future for her, full of new opportunities. Texas is the home she never left. Not necessarily by choice, but rather by precaution. She has been undocumented her entire life, and it was not a few days after the election, and after long years of paperwork, that she informed me she had finally obtained US citizenship. I cannot imagine the efforts that led her to where she is today. In fact, she followed a similar path her father did less than 20 years ago.

Vera’s father crossed the Rio Grande when he was only 18. From State to State, he found himself on the East Coast, where he was able to start his own business. He came with empty hands and established himself in a country where he is now a proud landowner. For Vera, her father’s journey is an example of the American Dream that I have been looking for. The example of a man, who was driven by work and perseverance, and was able to realize his own dream: start a family.

Vera, herself, did not cross the Rio Grande at 18. But as I listen to her, it is as if she is crossing it every day; she belongs to both Mexico and Texas and proudly identifies herself as Mexican-American. As a first-year student at the prestigious Rice University, she studies cognitive sciences and linguistics. Why linguistics? Because she speaks five languages and is fascinated by new cultures. Daughter of two immigrants, Vera is the first in her family to pursue higher education. She tells me she is a “first-generation student.” She talks to me with pride: she is living the dream.

Speaking further of dreams, I ask her what her reactions are to Kamala Harris’ big win. Vera does not necessarily agree with all of her policies, “but at least, she is a woman, it is already that, like a first step.” What she admires about Kamala Harris is not so much the high-profile personality that had captivated my attention in front of my television, but rather what she represents. Kamala Harris proudly affirms her identity and heritage, “which gives [Vera] the strength to never be ashamed of who I am, and to assume that yes, I am a Mexican immigrant.”

The dream for Vera is to have access to higher education and to be able to affirm with honour her identity. The dream is “unique” to each individual. By having access to education, Vera seeks to challenge the stereotypes of the Mexican woman, who, here in America, faces prejudices on her way to emancipation and success. Houston is home to the world’s largest medical center, and after her studies, Vera aspires to work there and contribute to a better representation of the Mexican population. She then remembers that as a child, she dreamt about entering med school. However, without papers, she knew it was going to be impossible. Growing up to a door already shut, Vera understood that not everything would be within her reach as an immigrant. Other dreams would always wait for her elsewhere on the road of the American Dream and, as the poems, a road full of obstacles, pain, and suffering. It is a tortuous road, where the adventure never waits, and adversity becomes an opportunity. For Vera, to overcome obstacles is to become stronger, more capable. It pushes her on the side of creativity, to double her efforts to satisfy her objectives. She lets me know that because Houston is a city of many immigrants that constitute different communities, it is easier to overcome obstacles. “When I see people like me, who work and suffer for the same reasons but however manage to reach their goals, it motivates me to succeed even more!”

The sense of community and solidarity, unique to the city of Houston, is what for Vera brings the American Dream from imagination into reality. It is a different reality than our idealized perceptions, a reality that demands patience and perseverance. By living through difficulties, one can realize all ambitions. After all, the price to pay is always worth the outcome.

Far away from downtown and Rice University, I end my short journey near my old bus stop, where parents drop their kids for school. It’s almost 3PM when the first bus arrives; it is Miss Laura’s bus.

Miss Laura was my bus driver during my first and last year at elementary school in Houston. Full of energy, always smiling — even under the mask — Miss Laura spreads positivity everywhere she drives.

Originally from Kansas City in Missouri, she decided to move to Houston spontaneously. Houston meant change for her, the beginning of a new chapter. Unsatisfied with her life in Missouri, she saw Houston as a land full of opportunities. “There is so much to do, so many people to meet,”  she says of the city.

Like with Vera, I ask her opinion on Kamala Harris’ role in the election. Before I even finish my sentence, she expressed her joy and pride over a woman of colour as vice-president. Miss Laura was impressed by Harris’ journey and perceives her as an example for not only young immigrants, but also for herself. For Miss Laura, Kamala Harris is the American dream. The United States is the “land of the Free” there are opportunities for all who agree to work hard to access their goals. America is like “‘a second chance at life’” to those who are hopeless and alone; not only the country offers opportunities, but it also allows “you to discover yourself.” The wildest dreams are obtained through struggles. Miss Laura cites the old saying, “‘you need to go through something in order to be someone.”

For the bus driver, living the American Dream is to live in difficulty to experience success and self-satisfaction. It is a journey that takes place deep within our soul, through which we discover our identity and who we really are. It is what I see in Miss Laura, who has reinvented herself since moving to Houston. She never knew what to do with her life, but there she is, the happiest driver on the road. Guided by the American Dream, she understood what she wanted to be; a compassionate and caring woman, who becomes like a second mother to the children she brings to school every single day.

The America of poems is the suffering and sorrows of the American Dream. But, although the dream is difficult to achieve, it waits for us, one way or the other. The dreams I encountered are not the dreams of women who became vice-president. The dreams I encountered are those of women who, despite the hardships they endured and continue to endure, have come to realize that the American Dream is more than a goal to be achieved; it is a life to be accomplished.

Joseph Abounohra is a U1 student majoring in International Management and minoring in Political Science. From France and Lebanon, he has lived in eight different countries. His areas of interest include the Middle East, South America, and Sustainability. He dedicates his free time to photography and cooking.