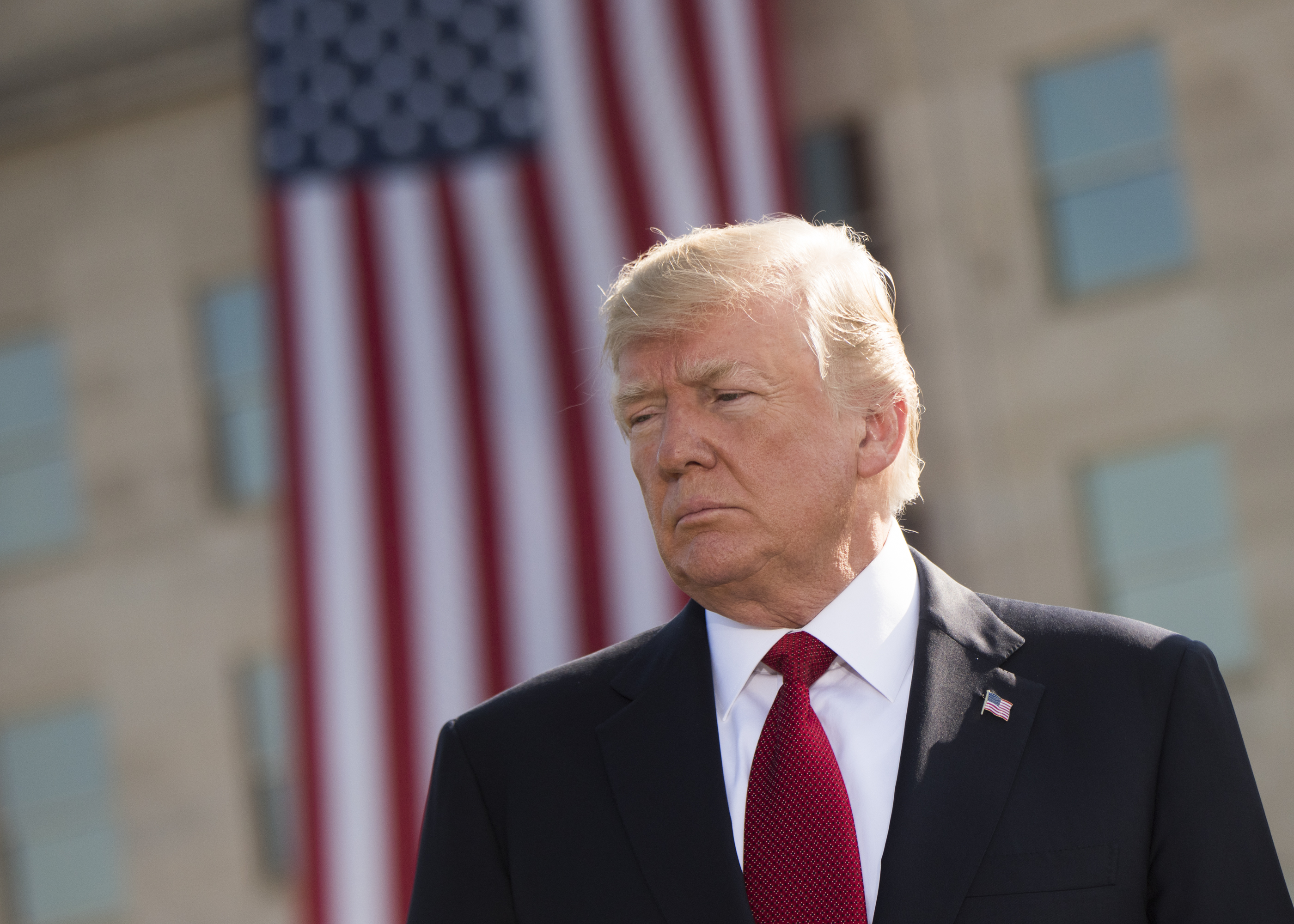 ‘’January 20th, 2017, will be remembered as the day the people became the rulers of this nation again.’’  – Donald Trump

Donald Trump ran an unlikely campaign to become the 45th President of the United States. Long regarded as a joke candidate during the Republican primaries, he stunned many by winning primary after primary against establishment candidates like Jeb Bush, Marco Rubio, and John Kasich. After Ted Cruz suspended his campaign following the Indiana primary, Trump became the presumptive Republican nominee. Despite a last-ditch effort by the ‘Never Trump’ movement, he officially won the nomination at the Republican National Convention in July 2016. Running on a platform promising to ‘Make America Great Again’, he then unexpectedly defeated Democrat Hillary Clinton during the general election, 304 to 227 in the Electoral College. However, his presidency is off to a rocky start. His current approval rating is only 35%, which is the lowest recorded for a first-year president in modern history.

This number is not surprising given that Trump’s short presidency has been riddled by controversy. Despite claiming that he wouldn’t have time to golf as president, Trump has already spent 81 days golfing since taking office, which is more than George W. Bush during his eight year presidency. He repeatedly criticized Barack Obama for golfing given ”all of the problems and difficulties facing the US”, but has not followed his own advice as president. He has attacked a number of people via his Twitter account, including the widow of Sgt. La David Johnson (a Green Beret killed in Niger earlier this year), documentarian Michael Moore, British Prime Minister Theresa May, and even Senator Bob Corker, a member of his own party. He has been accused of sexual assault by more than a dozen women, which has led to some Democrat Senators to ask for his resignation. Since May, Robert Mueller has been leading an investigation looking into potential ties between the Trump campaign and Russia. The investigation has led to the indictment of Paul Manafort, his former campaign manager, on 12 charges including conspiracy against the United States (although none of the charges are related to the campaign directly). George Papadopoulos, a campagin foreign policy adviser, was charged with making false statements to the FBI, and Michael Flynn, Trump’s former National Security Advisor, pleaded guilty to lying to the FBI about his contacts with Russian officials during the campaign.

With all the scandals that have plagued the first year of Trump’s presidency, it is easy to forget all that he promised during his campaign. He made several bold and colourful claims  during his campaign, including prosecuting Hillary Clinton (inspiring many ‘lock her up’ chants at rallies) to building a wall between the United States and Mexico. Presenting himself as a deal-maker, he went as far as saying that the American people would be ”tired of winning” because he would be so efficient as POTUS.  After a little less than a year after his inauguration, where do all his promises stand?

One of Trump’s main campaign promises was to ‘drain the swamp’: to regulate or get rid of Washington ”lobbyists, corruption, campaign finance and pay-to-play.” As he said in his inauguration speech, a Trump presidency would amount to ”transferring power from Washington, D.C., and giving it back to the people.” During his first week as president, he issued an executive order that banned ”administration officials from ever lobbying the U.S. on behalf of a foreign government.” However, he has not taken any other meaningful action since then. Spending on lobbying during the first half of 2017 was the highest it has been since 2012. Trump’s Cabinet choices have also not echoed his promise. For example, Betsy DeVos, his Education secretary, is a billionaire with no prior education experience who has given more than $7.8 million to GOP candidates over the years. In fact, 11 of Trump’s original 19 Cabinet picks had previous experience on boards that have lobbied the federal government. It is hard to believe that the swamp has been drained when many of Trump’s campaign picks serve to expand it.

Trump has also failed at one of his other major promises: to repeal and replace Obamacare. All the attempts have failed to pass in the Senate, where the Republicans only hold a two seat majority. With Doug Jones’s victory earlier this month, which reduces the Republican majority to only one seat, it is very unlikely that any bill to repeal Obamacare will be able to pass in the Senate until after the midterm elections. However, the Trump administration and the GOP-controlled Congress, short of repealing it, has still weakened Obamacare in the last year. The *tax bill* recently passed by Congress includes the repeal of individual mandates in 2019 and the marketing campaign for the enrollment period was drastically cut this year. As Rep. Bill Pascrell (D-N.J.) puts it,  “they obviously couldn’t kill it, so they’re trying to starve it slowly”.

One of Trump’s most colourful promises was to prosecute Hillary Clinton. However, as soon as he was elected, he declared that it was a secondary issue , stating ”It’s not something I’ve given a lot of thought, because I want to solve health care, jobs, border control, tax reform.” And when rally goers started chanting ‘lock her up’ back in September, he said that it was up to Jeff Sessions, and not him, to do something about it.

In the last year of Obama’s presidency, Justice Anthony Scalia died. While Obama nominated Merrick Garland to the Supreme Court to fill the vacant seat, Senate Majority Leader Mitch McConnell refused to hold a confirmation hearing until the presidential election. Hence, one of Trump’s major campaign promises was to nominate a conservative judge to the court. He fulfilled the promise early on, when he nominated Neil Gorsuch, who was later approved by the Senate. Gorsuch’s nomination is one of the biggest achievements for Trump on the domestic front, especially considering that Gorsuch, only 49 years old, could serve on the Supreme Court for decades.

Trump also promised to reduce environmental regulations, and he has been fulfilling that promise. He has dropped climate change from the list of national security threat, announced the downsize of two major national monuments (Bear Ears and Grand Staircase Escalante), and revived the Keystone and Dakota Access pipelines. Scott Pruitt, Trump’s appointment to head the United States Environmental Protection Agency (EPA), has announced the end of the Clean Power Plan, an Obama administration regulation on greenhouse gas emissions. Pruitt has also denied that CO2 is the main cause of climate change, even if it is the international consensus in the scientific community. With Pruitt heading the EPA, it is anticipated that more regulations will be repealed, given that Pruitt wants to give more power to the states on environmental issues.

Trump’s biggest victory in his domestic policy promises comes with the passage of the Republican tax bill in December, a bill which has been dubbed ”the most sweeping overhaul of the US tax system in more than 30 years.” Throughout the campaign, Trump promised historic tax cuts for individuals and corporations. While the tax cuts included in the bill are smaller than what was promised on the campaign trail, Trump described the passage of the tax bill as a ”win” and celebrated the legislative victory with Republican leaders at the White House. However, while Trump fulfilled a campaign promise with the tax bill, it may end up hurting him in the long run. Only 33% of Americans say they approve of the tax bill, and only 16% believe the bill lowers their taxes. With midterm elections less than a year away, Democrats could capitalize on the public’s disapproval of the bill to win back the majority in one or both houses of Congress. If that were to happen, Trump would have a much harder time fulfilling other campaign promises through Congress.

During the 2016 campaign, Donald seemed to preach an isolationist foreign policy. He promised to get the United States out of trade deals like the Trans-Pacific Partnership (TPP) and called NATO ‘obsolete‘. A few days after his inauguration, Trump made good on his promise to pull the U.S out of TPP with an executive order. He called it “great news for American workers.” The Trump administration also initiated the renegotiation of the North American Free Trade Agreement (NAFTA), which was another of Trump’s campaign promises. There have been five rounds of negotiations already, with the sixth one in Montreal in January. The Trump administration has also withdrawn from the Paris Agreement, like it promised, because it believes that the deal isn’t favourable enough for American workers. While Trump is working to fulfill his promises regarding treaties, he has changed his position on NATO, declaring the organization is ”no longer obsolete” while meeting with NATO’s secretary general in April.

Trump had also been fulfilling his promise to implement a travel ban. On January 27th, he issued an executive order called “Protecting the Nation From Foreign Terrorist Entry into the United States”, banning citizens from Iran, Iraq, Libya, Somalia, Sudan, Syria and Yemen from entering the U.S. After the ban was blocked by various courts, Trump issued a new version of his previous ban, removing U.S permanent citizens and visa holders, and Iraqi citizens from the ban. The new ban was also only valid for ninety days. While the new ban was again blocked by various federal judges, the Supreme Court ruled that a limited version of the ban could go into effect. After the second ban expired, Trump issued a third ban that targeted citizens from Chad, Iran, Libya, North Korea, Somalia, Syria and Yemen, and some government officials from Venezuela. Once again, it was blocked by federal judges, but it was approved by the Supreme Court in early December. Almost a year after his first executive order on the topic, Trump has scored a major victory regarding his travel ban and has fulfilled a major campaign promise.

Trump’s last major campaign promise was to build a wall between the U.S-Mexico border. He declared that he would ”build a great, great wall” and that Mexico would pay for it. In practice, Mexico has refused and Congress hasn’t been able to pass funding of any kind. While it still isn’t clear who is going to pay for the wall, the administration is still going forward with the project. In late October, it unveiled eight prototypes of potential walls. The Customs and Borders Protection is currently testing the prototypes to determine “whether they can withstand breaching methods and equipment”, to propose a new and improved prototype. While Trump is clearly trying to fulfill this promise, nothing concrete can be done without funding.

A year after Trump’s inauguration, he has fulfilled some of his major campaign promises, but many are still in the works or have been abandoned. Given that both houses of Congress are controlled by the GOP, it shouldn’t be as hard as it has been for him to get legislation passed. However, the make-up of Congress might change following the midterms next year, especially since ”Democrats have greatly outperformed expectations” in special elections this year. There have also been talks of impeachment, and Mueller’s investigation is still ongoing. Donald Trump’s rise to the presidency was unpredictable. A year in, the narrative has not changed.