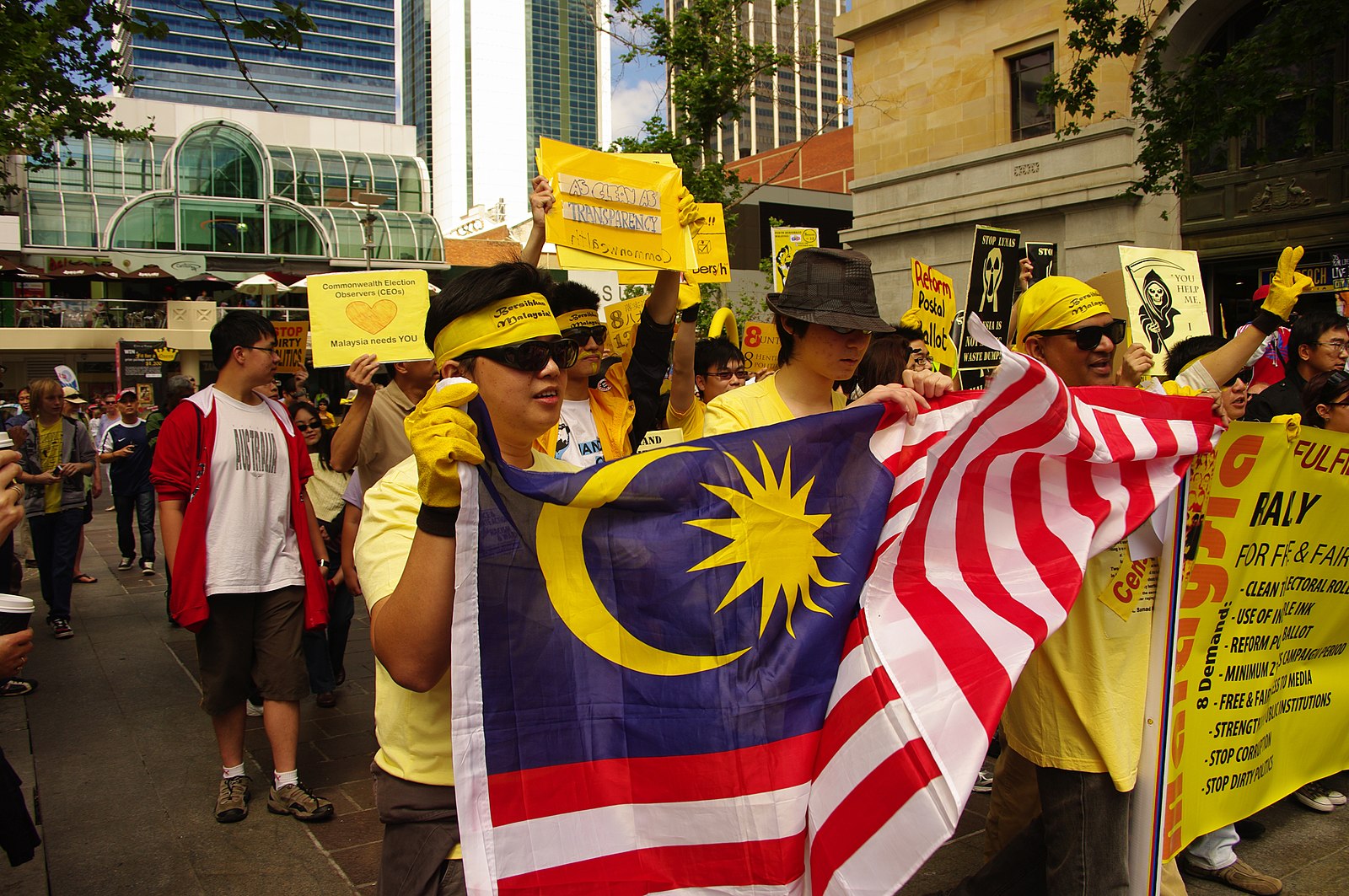 An unprecedented mix of ecstasy and shock layered Kuala Lumpur on May 10th as Malaysians awoke dumbfounded to discover that the opposition party, Pakatan Harapan (PH), had somehow toppled the archaic incumbent, the Barisan Nasional (BN). The excitement – though laced with an inherent skepticism –  in the air was palpable; Malaysians have not been accustomed to a functioning two-party system since the Barisan Nasional had claimed victory and remained in power following every single election since the country’s independence in 1957. Many were unsure of whether or not celebrating the unprecedented victory was premature. By the morning of the 10th, the PH had secured just over 45% of the vote, thereby giving them the largest percentage of the vote and the parliament in tow.

Many Malaysians figured that by dinnertime the Barisan Nasional would have found a way, as they always had in the past, to come out victorious despite what the votes had called for. Yet as the day progressed, it was proving to be less and less like any other post-election day the country had seen before. The new prime minister is typically sworn in first thing in the morning, but this time around swearing-in had been pushed to a later time. Around noon, BN’s leader, Najib Razak, had legitimized the voting results by delivering a quasi-concession speech in which he confirmed that the Malaysian people had, in fact, voted overwhelmingly in favor of the opposition party and it was his duty to recognize and accept this reality. While this statement, in and of itself, was critical to the peaceful transfer of power that many hoped would ensue, this was not the only criterion.

While all elections in all parts of the world command a sense of unprecedented importance, the 2018 Malaysian elections were truly unlike any other: the incumbent Prime Minister, Najib Razak, was facing opposition from his former mentor and former BN prime minister, 92-year-old Mahathir Mohamad, who had quit the dominant party only two years prior to form his own political party in the Pakatan Harapan (PH), which served as the direct successor to Malaysia’s largest opposition party, the Pakatan Rakyat (PR). PR was led by, and many believe the party to still be, led by Anwar Ibrahim, one of the most prominent opposition leaders in Malaysia. Many believe that he would have been elected Prime Minister in 2018 instead of Mohamad had it not been for his unsubstantiated arrest and subsequent 5-year prison sentence in 2015 following almost two decades of serial arrests for mostly bogus claims, by Razak on trumped-up sodomy charges.

Prior to election day, Mahathir and his party promised the Malaysian people that should they be elected he would pardon Ibrahim and step aside so that the acclaimed, albeit infamous, opposition leader could take over as prime minister. Although some saw this as a controversial and highly unlikely promise, others recognized the important and often overlooked role that Ibrahim had played in championing democracy throughout the years and praised Mahathir for his cooperative and bipartisan efforts. In addition to his party’s leadership, Mahathir had also promised the Malaysian people significant reforms, notably the elimination of the overwhelmingly unpopular goods and services tax and the unification of the otherwise divided Malaysia.

Malaysia functions under a constitutional monarchy in which its crown is elected. Of Malaysia’s thirteen states, nine are headed by traditional Malay rulers and the remaining four have elected ministers, who all serve as de facto leaders. Eligibility for the throne in these states is limited to male Malay Muslims of royal descent, with seven of the nine Malay States being standard hereditary monarchies based on agnatic primogeniture (tracing descent through male ancestors), one being rotational among three branches of the royal family and based on agnatic seniority, and the final one being an elective monarchy where the ruler is elected from male members of the royal family from hereditary chiefs. Every five years (or when a vacancy occurs), the nine rulers convene for the Conference of Rulers and elect among themselves the Yang di-Pertuan Agong, the constitutional monarch and Malaysia’s head of state.

The current Yang di-Pertuan Agong is Sultan Muhammad V of Kelantan and he was, as the King is for any election, responsible for approving the results of the election and inviting the winning party’s leader to form a government. Because of the unusual delay on the 10th, there was speculation that Sultan Muhammad V was actively trying to delay the swearing in of prime minister-elect Mahathir Mohamad. These speculations arose following a press conference given by Mahathir himself in which he was asked whether or not the delays of his swearing-in were because the King did not like him due to various constitutional amendments he had tried to pass when he had been PM in the 1980s. While Mahathir denied these claims, the accusatory language of the question stuck. The King quickly rejected the accusations and published a statement voicing his support for the democratic process and his eagerness to work with Mahathir. Coincidentally, shortly thereafter it was also confirmed that the swearing in would occur at 9:30 that evening. It is hard to know why the inauguration was delayed over 12 hours, but by 10:30 am on May 10th, the Malaysian people were finally able to relish in their victory and all the joy that came with it; they officially had a new government and a new leader after what had seemed like an excruciatingly long and largely fruitless campaign.

For months prior to the elections, Malaysians all around the country had been force-fed campaign promises from both BN and PH assuring them that if their respective party came out victorious, the nation would thrive – the economy would surge, unemployment would plummet, education would soar, etc. But as is often the case, the elections rapidly veered away from policy and instead morphed into an ideologically-tarnished, partisan battle with most voters choosing to vote against a party or person rather than for it. Many PH voters would later insinuate that it was not necessarily that they believed Mahathir to be an exciting or particularly revolutionary candidate, but rather that the thought of another five years with the same political party was simply impossible.

In addition to the profound and damaging systemic corruption that had inched its way into Malaysian politics over the years, Najib Razak, the infamous BN leader, had also been accused of personal corruption, notably regarding his role in the 1Malaysia Development Berhad (1MDB) scandal. The 1MDB scandal began in 2015 when Razak was accused of channeling over RM2.67 billion (over $894 million CAD) from 1MDB, a government-run strategic development company that Razak himself had set up in 2009, into his personal accounts. Although the money trail had supposedly been traced to Razak, the attorney general cleared Razak of any wrongdoing in January 2016. However, despite his best efforts to put the scandal behind him, the controversy remained in the limelight, causing his favorability among Malaysians to plummet not only among civilians but among his political peers as well. In fact, in 2016, soon-to-be-prime-minister Mahathir quit the United Malays National Organization, one of the founding members of the Barisan Nasional coalition and the party to whom Mohamad had belonged to since 1947 because of its support for Razak in the 1MDB scandal.

While the 2018 elections were plagued with corruption, distrust, and uncertainty, the eventual results signal a new dawn for the Southeast Asian nation. No longer is their democracy solely a title with no bearings, but instead a bourgeoning reality within which the Malaysian people could actively vote for or against whomever they choose. The corruption that had infiltrated the political system over the years had finally taken a beating and there is newfound hope that the rules and laws upon which Malaysia’s democracy was founded on, all the way back in 1957, may finally be respected and upheld as they were intended to be.